The cousins Roosevelt, Theodore and Franklin, were both eighth generation Americans who descended from Claes Martenszen van Roosevelt, a man who arrived in what was the New Amsterdam from the Netherlands in 1664. Claes had a son named Nicholas who was born in 1658, and it was then that the family tree branched into the Oyster Bay Roosevelts (the ancestors of Theodore Roosevelt) and the Hyde Park Roosevelts (ancestors of FDR). James Roosevelt, FDR's father, was a member of the latter branch of the family. He was a tall man with mutton chops whiskers. He was a gentleman farmer who bred trotting horses and had a patrician bearing.

At some point in time, the two branches of the family split politically. Franklin Delano Roosevelt was born on January 30, 1882, in the Hudson Valley town of Hyde Park, New York. His father was James Roosevelt and his mother was James' second wife, Sara Ann Delano. It wasn't unusual for the Roosevelt family to keep the name in the family. FDR's parents were sixth cousins. Both came from wealthy old New York families, the Roosevelts, the Aspinwalls and the Delanos. Franklin had a half-brother, James "Rosy" Roosevelt, from his father's previous marriage.

Roosevelt grew up in a wealthy family. His father, James Roosevelt, had graduated from Harvard Law School in 1851, but never practiced law. He received an inheritance from his grandfather, also named James Roosevelt. James Roosevelt (FDR's father) was a "Bourbon Democrat" who once took his son Franklin to meet President Grover Cleveland in the White House. FDR's mother Sara was the dominant influence in Franklin's early years. She claimed, "My son Franklin is a Delano, not a Roosevelt at all." James was 54 when Franklin was born. He was considered to be a remote father.

As a child, Roosevelt learned to ride, shoot, row, and to play polo and lawn tennis. He also took up golf in his teen years, and was known for his long drives. He was club champion in his late teen years at the small golf club on Campobello Island, New Brunswick, Canada, where his family had a summer cottage. There Roosevelt learned to sail early, and when he was 16, his father gave him a sailboat.

Roosevelt made frequent trips to Europe, going there for the first time at the age of two. He went with his parents every year from the ages of seven to fifteen. He learned to become conversant in German and French and he spent a year attending public school in Germany at age nine. Otherwise he was home-schooled by tutors until he was 14. He then attended Groton School, an Episcopal boarding school in Groton, Massachusetts. Its headmaster, Endicott Peabody, was a minister who preached the duty of Christians to help the less fortunate. He urged his students to enter public service. Peabody remained a strong influence throughout Roosevelt's life, and he even officiated at his wedding.

After graduating from Groton, Roosevelt went to Harvard College. He was an average student academically. He was skeptical of what he was taught at Harvard and as President he later declared, "I took economics courses in college for four years, and everything I was taught was wrong." While at Harvard he was a member of the Alpha Delta Phi fraternity and the Fly Club, and was also a school cheerleader. Hebecame editor-in-chief of The Harvard Crimson daily newspaper.

Roosevelt's father died in 1900. The following year, his fifth cousin Theodore Roosevelt became President of the United States. Although the two supported different political parties, FDR admired his cousin's vigorous leadership style and his enthusiasm for progressive reforms. FDR graduated from Harvard in 1903 with an A.B. in history. He entered Columbia Law School in 1904, but dropped out in 1907, although he did pass the New York bar exam. In 1908, he took a job with the prestigious law firm of Carter Ledyard & Milburn, working in the firm's admiralty law division.

Six years earlier, in 1902, Franklin began courting his future wife Eleanor Roosevelt, whom he had known as a child. Eleanor and Franklin were fifth cousins, once removed, and Eleanor was a niece of Theodore Roosevelt. They began corresponding with each other in 1902, and in October 1903, Franklin proposed to Eleanor. On March 17, 1905, Roosevelt married Eleanor in New York City, despite the disapproval of his mother. Sara Roosevelt was very possessive of her son and thought that he was too young for marriage. She tried to convince him to call off the engagement several times. Eleanor's uncle, President Theodore Roosevelt, stood in at the wedding for Eleanor's deceased father, Elliott.

Following their marriage, the couple moved into Springwood, his family's estate at Hyde Park. The home was owned by Sara Roosevelt until her death in 1941. She also did the planning and furnishing of a townhouse she built for the couple in New York City. Sara had a twin house built alongside for herself. Eleanor claimed that she never felt at home in the houses at Hyde Park or New York, but she loved the family's vacation home on Campobello Island, a home that Sara also gave to the couple. 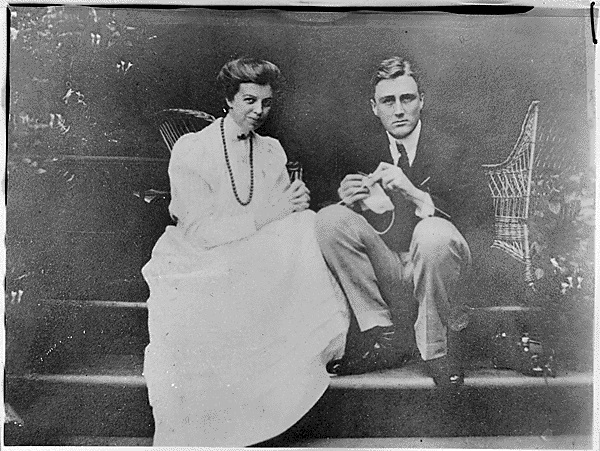 Roosevelt had various extra-marital affairs, including one with Eleanor's social secretary Lucy Mercer, which began soon after she was hired in early 1914. In September 1918, Eleanor found letters revealing the affair in Roosevelt's luggage. Franklin contemplated divorcing Eleanor, but was overruled by his mother Sara. Lucy Mercer also said that she would not agree to marry a divorced man with five children. Franklin and Eleanor remained married, and Roosevelt promised never to see Lucy again. From that point on their marriage became more of a political partnership than an intimate one. Eleanor established a separate home in Hyde Park at Val-Kill, and devoted herself to various social and political causes.

Franklin broke his promise to Eleanor to refrain from having affairs. He and Lucy maintained a formal correspondence, and began seeing each other again in 1941, and Lucy was with Roosevelt on the day he died in 1945. Despite this, Roosevelt's affair was not widely known until the 1960s. Roosevelt's son Elliott claimed that his father had a 20-year affair with his private secretary, Marguerite "Missy" LeHand.
Collapse