I've broken with my methodology of choosing subjects for this theme by random draw and have instead selected Franklin Pierce as the proper subject for June 10th because of a common denominator. June 10th is considered to be the birthday of the Alcoholics Anonymous program (in 1935) and Franklin Pierce was probably the president most likely to have been a candidate for such a program, had it been around back in his day. Though it's usually unwise to make such a diagnosis of alcoholism based on reputation alone, there are strong signs that lead to an almost irresistible conclusion that Pierce was an alcoholic. His death in the fall of 1869 from cirrhosis of the liver is one strong indicator, but so are the many contemporary accounts of Pierce's hard drinking. A pejorative campaign slogan that the opposition Whigs liked to chant was how the ex-general Pierce the "the hero of many a hard fought bottle". 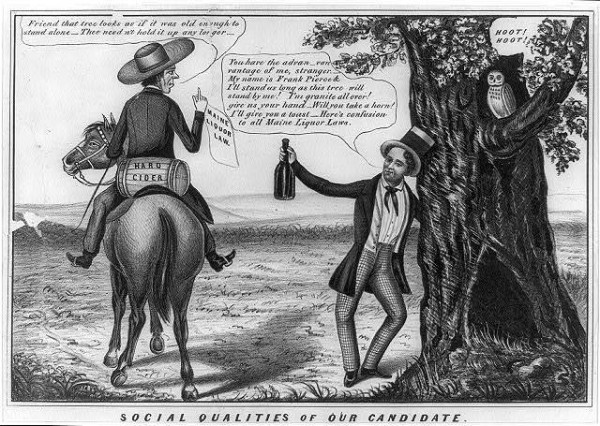 Pierce had a lot of tragedy in his life, including the deaths of his three sons in their infancy, and the especially gruesome death of his last surviving son, the much loved Benny, in a train derailment accident while Pierce was President-elect. It is easy to say "you'd drink too if you had Franklin Pierce's life," though alcoholism is understood by many as a genetic affliction. But are their clues in Pierce's early life that this was to be his destiny?

Franklin Pierce was born on November 23, 1804 in Hillsboro, New Hampshire. His father was General Benjamin Pierce and his mother was the former Anna Kendrick. It was a second marriage for the general and he had a daughter from his first marriage. Pierce had five older full siblings. Pierce would recall the contrasting personalities of his parents. His father was a pillar of the community, influential, well-respected, a veteran of the Revolutionary War, who fought in the Battles of Breeds Hill and Ticonderoga, and who wintered a Valley Forge with George Washington. Benjamin Pierce rose to the rank of General in the state militia and served as country sheriff, and later as governor of his state, a Jeffersonian Republican. He was a stern disciplinarian to his children, but he must have also had a kind side because he had a reputation while sheriff for treating his prisoners with benevolence.

Conversely, Pierce recalled his mother as being very affectionate with a forgiving nature. Apparently young Franklin Pierce put this nature to the test. He was described as not being bookish, but as someone who loved the outdoors. He loved swimming, fishing, ice skating and rough-housing with his friends, and frequently he chose these activities over school attendance. But adults found him charming, polite, and poised.

Pierce and his father had different points of view on the value of an education. Benjamin Pierce was determined that his son would obtain the college education that he never got, and sent Franklin to learn Latin and Greek in a number of academies out of town. Ben Pierce tried to enroll his son at Dartmouth College, but at the time it was run by Federalists and Pierce Sr. was a Jeffersonian. Instead, sixteen year old Frank was sent off to Bowdoin College in Brunswick, Maine. It was there that Pierce met his lifelong friend, author Nathaniel Hawthorne.

Unfortunately, when it came to "work hard, play hard," Pierce was better at the second part than the first. His skipped classes to go on hikes or go fishing. At night in the dormitory he lived in, studying was not his greatest interest. Instead he would copy work from other students. He was said to enjoy starting wrestling matches with his fellow students, or sneaking out to go drinking at the nearby Brunswick tavern. Reports of contemporaries suggest that Pierce could not hold his liquor and it was during this time that Pierce's reputation as an alcoholic began to ferment.

Not surprisingly, Pierce paid a price academically. He finished dead last in his class at the end of his sophomore year. This seemed to awaken an instinct to act responsibly and the next year Pierce took his studies much more seriously. He roomed with a sober young Methodist friend named Zenas Caldwell, who seemed to be a positive influence. In his graduation year he finished fifth in his class and was chosen to speak at his graduation ceremony, delivering a seven minute address in Latin. 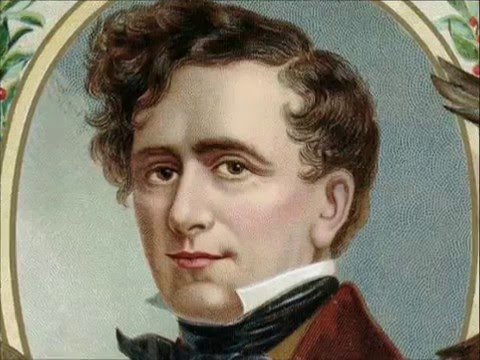 Pierce returned home to read law with a local attorney, and in 1825 he moved to Portsmouth, New Hampshire, to study law in the office of Senator Levi Woodbury. Two months shy of his twenty-third birthday, he returned home to Hillsboro to open up his own law office. He helped his father's campaign for governor (a successful one in 1827, but unsuccessful in 1828.) In 1829 Pierce was unanimously elected to the state legislature as a Jacksonian Democrat, with greater political successes to follow.
Collapse