Richard Milhous Nixon was born in the Los Angeles suburb of Yorba Linda, California on January 9, 1913 in a 700 square foot home that his father built, a home without running water or electricity for much of Nixon's life. As his biographer Elizabeth Drew writes, "Richard Nixon had a hard early life." At the time the Orange County community only had a population of about 200 people and they were not a wealthy community. Nixon was the second of five sons born to Frank Nixon and the former Hannah Milhous. Nixon had four brothers: Harold, Donald, Arthur and Edward. Two of the boys died young, adding to the unhappiness that poverty can bring to a home. Harold suffered from tuberculosis and died when he was 24. Arthur died from the same disease at age 7. 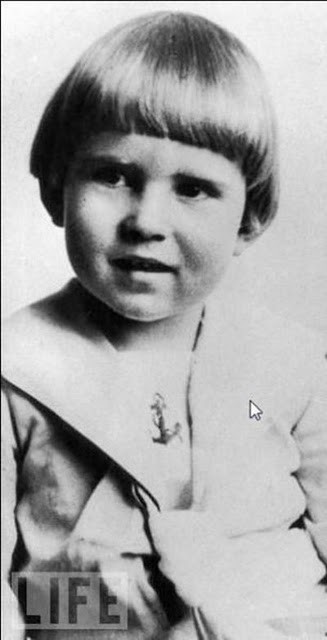 Frank Nixon is described as "quarrelsome and combustible" and it is said that Nixon could never win his father's approval. Punishment was meted out physically. Hannah Nixon is described as a devout Quaker, whose parents did not approve of her marriage to Frank. She is said to have been cold and not affectionate to her children, though unselfish to others and a caring mother to her two children who were ill. Frank was uneducated and had run away from home when he was 13. He had run a failed lemon orchard and had also worked in the oil patch. Hannah had some college education from nearby Whittier College.

When Richard Nixon was nine, the family moved to Whittier, a community populated by a conservative sect of Quakers. Nixon attended church on Wednesday evenings as well as on Sundays. In Whittier, Frank opened a gas station and grocery store and his labor force was made up of Hannah and his sons. As a teenager, Richard Nixon had the task of getting up at 4 a.m. to drive to California buy produce fruit for the store.

Nixon was a bright student. He had learned to read before entering the first grade, and finished near the top of his class for some grades. He won speaking contests and was chosen as the valedictorian for his grade 8 class, but he did not make a lot of friends and was considered to be a loner. Though he was said to have had poor social skills, he had a knack for school politics and won elections as class president. He also went out for sports and even though he was said to be an average athlete. He played on the football team, but was not a starter. 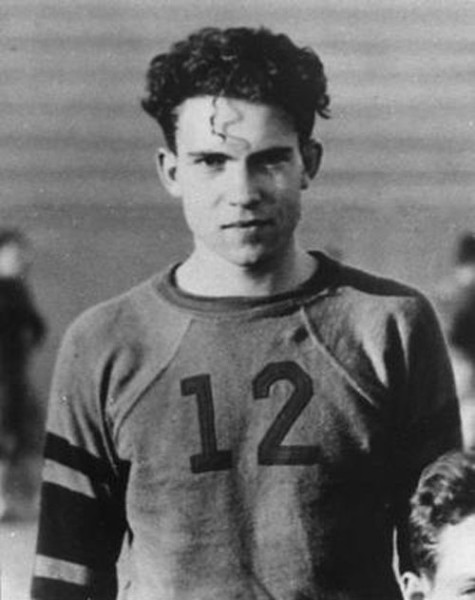 After Nixon graduated from Whittier, he had been offered a scholarship to attend Harvard, but that was beyond the means of his parents. He stayed home where he attended Whittier College. He once went out for the football team, and made the team, but failed to win a letter. He did excel as a public speaker. When a local group of affluent students known as the Franklin Club denied Nixon a membership, he organized a rival fraternity and he was elected president of the student body in his final year there. One of his successes was convincing the school administration to hold school dances, something new for the conservative Quaker college.

While at Whittier, Nixon became engaged to a girl named Ola Florine Welch, but they ended up breaking up. Welch later said of Nixon, "Most of the time I just couldn't figure him out." Nixon took the breakup very hard.

Nixon left home in 1934 to attend Duke University Law School. His parents were unable to offer little in the way of financial help so Nixon had to hold down several jobs to supplement a partial scholarship. He was described as hardworking and did not date during his time there. His classmates gave him the nickname "Gloomy Gus", though he did get elected president of the law students association in his final year. Nixon hoped to score a job with one of the prestigious Wall street law firms and was disappointed when no such offer came. He returned home to Whittier where he took a job with a firm in which one of the partners had attended college with Nixon's mother. Nixon did well at the firm, earning a good salary and becoming a partner in the firm.

In 1938, while a member of a local community theatre group called the Whittier Community Players, Nixon met his future wife, Thelma "Pat" Ryan. Nixon was said to be infatuated and told her that she was going to be his wife. She wasn't interested at first, but he pursued her affections and two years later she accepted his marriage proposal. 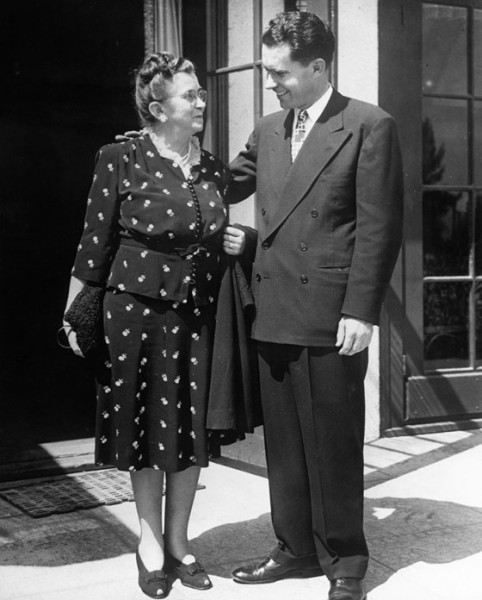 In his final remarks at the White House on August 9, 1974, Nixon talked about his mother and said, "Nobody will ever write a book, probably, about my mother. Well, I guess all of you would say this about your mother – my mother was a saint. And I think of her, two boys dying of tuberculosis, nursing four others in order that she could take care of my older brother for 3 years in Arizona, and seeing each of them die, and when they died, it was like one of her own. Yes, she will have no books written about her. But she was a saint.
Collapse