On June 5, 2004 (16 years ago today), Ronald Wilson Reagan, the 40th President of the United States, died at his home in Bel Air, California at the age of 93. He died from pneumonia, which was complicated by the Alzheimer's disease that he had been suffering from. Prior to his presidency, he had served as the 33rd Governor of California from 1967 to 1975, and before that he was a well-known radio, film and television actor. Reagan was born on February 6, 1911. He was born in Tampico, Illinois, raised in Dixon, Illinois and attended Eureka College, where he earned a Bachelor of Arts degree in economics and sociology. After graduating, Reagan moved first to Iowa to work as a radio broadcaster and then, in 1937, to Los Angeles where he began a career as an actor, first in films and later in television. Some of his best known films include Knute Rockne, All American (1940), Kings Row (1942), and Bedtime for Bonzo (1951). He served as President of the Screen Actors Guild and later became the spokesman for General Electric. He got his start in politics during the time that he worked for GE. Originally he had been a member of the Democratic Party and was an admirer of Franklin Delano Roosevelt. But his positions began shifting to the right in the 1950s, and he became a member of the Republican Party in 1962.

Reagan delivered a very memorable in support of Barry Goldwater's presidential candidacy in 1964, known as "A Time for Choosing" that was admired by and inspired conservative Republicans. He was persuaded to seek the GOP nomination for Governor of California and he was elected to that office two years later. He won re-election in 1970. Reagan sought his party's nomination for President in 1968, but finished third behind Richard Nixon and Nelson Rockefeller. He tried again in 1976, losing to incumbent President Gerald Ford. Persevering, he won both the nomination and the Presidency in 1980, defeating incumbent Jimmy Carter. 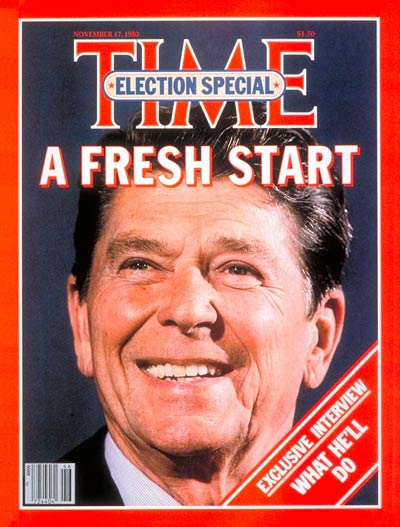 As president, Reagan was proactive both politically and where the economy was concerned as well. His supply-side economic policies (called "Reaganomics" by the media) advocated reducing tax rates to spur economic growth, controlling the money supply to reduce inflation, deregulation of the economy, and reducing the size of the federal government. In his first term he survived an assassination attempt on March 30, 1981, only 69 days into his term. He also took a hard line against labor unions, threatening to fire striking air traffic controllers if they didn't return to their jobs. He also announced a "War on Drugs" and ordered an invasion of Grenada.

Ronald Reagan was re-elected in a landslide in 1984, running on a campaign which declared that it was "Morning in America". He won every state except for his opponent's home state of Minnesota and the District of Columbia. His second term was primarily concerned by foreign policy matters, such as the ending of the Cold War, the 1986 bombing of Libya, and the revelation of the Iran–Contra affair. He publicly called the Soviet Union an "evil empire" and supported anti-communist movements worldwide. He moved away from his first term the strategy of détente, and ordered a massive military buildup in an arms race with the USSR. Reagan negotiated with Soviet General Secretary Mikhail Gorbachev, culminating in the INF Treaty which decreased both countries' nuclear arsenals.

Reagan left office in 1989. Five years later, in 1994, the former president disclosed, in a public letter (shown above) that he had been diagnosed with Alzheimer's disease earlier that year. He dropped out of the public eye and died ten years later on June 5, 2004 at the age of 93. He remains a conservative icon, and generally ranks highly in public opinion polls of U.S. Presidents. He is credited for generating an ideological renaissance on the American political right and for leading the nation out of one of its worst economic periods, a time when interest rates were extraordinarily high and public morale was extraordinarily low. He is also fondly remembered for his civility and good humor and his infectious optimism. 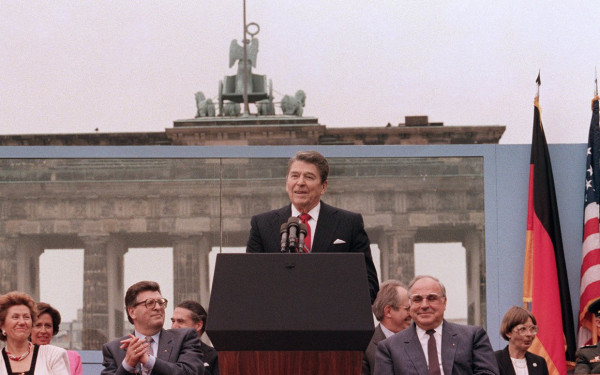 Though Ronald Reagan is most commonly associated with California, the state where he made all of his movies as an actor and later became Governor of, he was actually born further east, in Illinois on February 61, 1911. His father, John Edward Reagan, was called Jack by his friend. He was an Irish Catholic with too much of a fondness for whiskey. His mother, the former Nellie Clyde Wilson, was a Scottish Protestant whose family had moved to Illinois from Ontario. Nellie's father abandoned his wife and seven children (Nellie was the youngest) and her mother raised the brood while working as a domestic servant. Nether Jack nor Nellie attended high school. Reagan's parents were married in 1904 and the future president was the second child born to the couple. 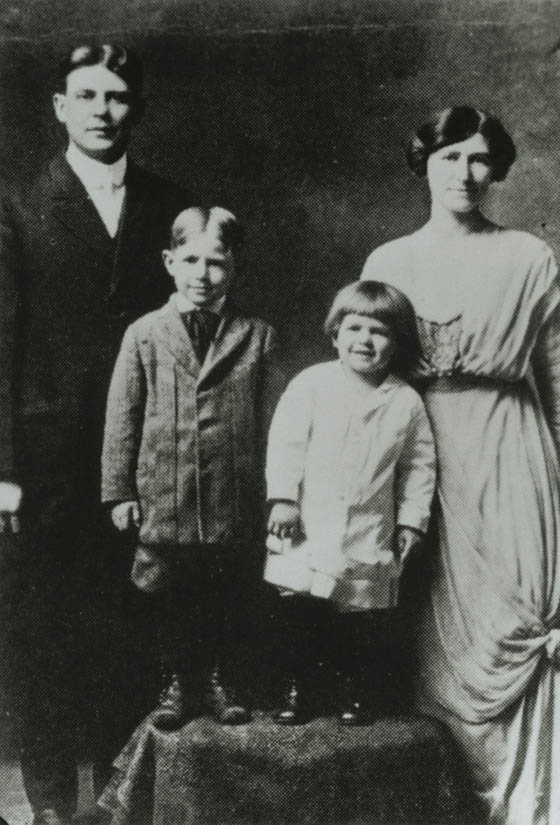 Reagan was born in the family home above the bakery and general store where his father worked in Tampico, Illinois. The baby Reagan was given the nickname "Dutch" because Jack said that he looked like a "fat Dutchman" and the name stuck. His older brother Neil (nicknamed Moon because of his resemblance to the comic strip character Moon Mullins) had been born in 1908. It was difficult pregnancy and Nellie's doctor recommended that she not have any more children. Nellie had left the Catholic Church in 1910 to join the Disciples of Christ, a theologically liberal sect with strong abolitionist sentiments. Her husband's binge drinking likely played a significant part in her motivation to convert to this denomination.

Young Ronald Reagan's first performance on stage was said to be playing roles in temperance themed plays that his mother wrote for her church. Jack worked at various jobs including as a shoe salesman, but hard drinking and hard times combined to keep the family in poverty. The family moved around a number of times. They moved to Chicago when Ronald Reagan was three where Jack sold shoes in the Fair Store on State Street (that great street). He lost that job after he was arrested for being drunk and disorderly. Jack lost another job in Galesburg due to his drinking. The family moved to Monmouth where Nellie almost died during the Great Influenza pandemic of 1918. From there they moved to Tampico and then to Dixon where the family lived in five different homes.

By age 10, Ronald Reagan had lived in at least ten different homes. Because of this he was unable to cultivate lasting childhood friendships and was said to have spent a lot of time in solitary pursuits such as swimming, skating, and horseback riding. Poor eyesight frustrated his abilities as a baseball player. Reagan liked to read as a youth, with his favorite authors said to be Zane Grey, Horatio Alger, Edgar Rice Burroughs.

The Reagans lived in Dixon until Ronald Reagan was twenty-one. It was a town of about 8,000 people and the main industry was dairy farming. Though Reagan would later present fond childhood memories of the Norman Rockwell variety, his brother Neil had less nostalgic memories, including his father's drinking and how he would either drink away the Christmas present money, or overspend on things the family couldn't afford. Ronald Reagan recalled, when he was 11 years old, finding his father passed out in the snow at the back of the family home.

Reagan continued to pursue acting when he attended North Dixon High School, where he was president of the Drama Club. He wrote school plays and starred in them, doing so as a means of escaping an unhappy home life. His high school yearbook showed his motto as "Life is just one grand sweet song, so start the music", predicting the life of an optimist. This was a line from a poem he wrote called Life. Despite not yet hitting his growth spurt (he was just 5'3" in high school), he played football and excelled as a swimmer, becoming certified as a lifeguard at the local YMCA. At age 16 he worked seven days a week as a lifeguard at nearby Lowell Park for $15 a week. He had to perform rescues and even artificial respiration on occasion.

His high school girlfriend was Margaret Cleaver and it was her father, a minister at a local church, who taught Reagan to drive, and helped him to get into Eureka College, an institution run by the Disciples of Christ. He used his lifeguarding money, as well as an athletic scholarship to pay his tuition and washed dishes to support himself. His grades were not great, but he was said to have succeeded because of an excellent memory.

When the Great Depression hit, Jack worked as a travelling salesman, and his drinking problem was compounded with his marital infidelity. Jack was fired from his salesman job, but was saved due to his allegiance to the Democratic Party, which managed to provide him with a job in the Federal Emergency Relief Administration, distributing food stamps. Reagan's parents did instill the value of rejection of racism. When two African-American football players from another city were denied hotel accommodation, Regan brought them home to stay at his house, with his parents' blessing. Reagan and Margaret Cleaver became engaged in 1932 when they graduated from Eureka, but the two soon began to drift apart. Margaret was a strong scholar, finishing at the top of her class, and while she had ambition, she saw him as directionless at the time. The engagement was broken off in 1934. Reagan went on to a career in radio, which led to the movies, and to the fame that would propel him to the presidency.
Collapse