Millard Fillmore was another of the antebellum Presidents from the north who was sometimes pejoratively referred to as a "doughface" (and no, that has nothing to do with body shaming.) Fillmore was a northerner who was sympathetic to southern slaveholding interests, at least to the extent that he was willing to cast the deciding vote in support of a group of bills collectively known as the Compromise of 1850, which included the controversial Fugitive Slave Act. When Fillmore was Vice-President, he presided over some of the most heated and passionate debates in the Senate over the issue of whether to allow slavery in the territories acquired in the Mexican War. In January of 1850, Henry Clay introduced what was called the "Omnibus Bill", a compromise which proposed to admit California as a free state, organize territorial governments in New Mexico and Utah, and ban the importation of slaves into the District of Columbia for sale and export out of it. But the bill also proposed to amend the Fugitive Slave Act, to require northerners to return those arrested while attempting to escape slavery to their southern "masters". President Zachary Taylor did not support the bill, but Fillmore informed him in May 1850 that if senators were divided equally on the bill, he would cast his tie-breaking vote in favor. Taylor died in July of 1850. 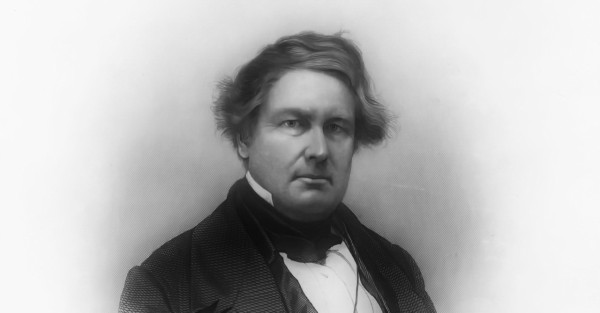 What is surprising about Fillmore's position on the issue is that he himself had once escaped a form of slavery, more accurately he had fled from indentured servitude as a child, making one wonder why he was not more sympathetic to the plight of those forced into labor against their will.

Keeping with a trend in early presidents, Millard Fillmore was born on January 7, 1800, in a log cabin on an isolated farm at the southern end of what is now Moravia, Cayuga County, in the Finger Lakes region of New York, just west of Syracuse. His parents were Nathaniel Fillmore and Phoebe Millard and Nathaniel Fillmore. His parents were New Englanders who had left Vermont and its rocky soil, believing that the farming would be better in New York. Millard was the second of eight children and the oldest son. Nathaniel Fillmore was the son of Nathaniel Fillmore Sr., who had been a native of Franklin, Connecticut, and who was one of the earliest settlers of Bennington, Vermont. Fillmore's parents had moved from Vermont in 1799. But they brought their bad luck with them. The title to the Cayuga County land that Nathaniel thought he owned proved defective due to an inaccurate survey. The Fillmore family moved to nearby Sempronius, on Lake Skaneateles, where they leased land as tenant farmers, and Nathaniel occasionally taught school.

Being renters as opposed to land owners was a step down the social circle. Young Millard worked hard on the farm, and his father chastised his son's desire to go fishing as idleness. Millard was said to have worked hard on the family farm, hoeing corn, mowing hay ad reaping wheat. He cut and stacked firewood, helped to clear land and removed stumps for new crop fields. Nathaniel could not afford a formal education for Millard and he hoped that his son would learn a trade. Nathaniel apprenticed fourteen year old Millard to learn the trades of wool carding and cloth dressing. These were professions that could be learned without any cost to the father. The first tradesman he was apprenticed to, Benjamin Hungerford of Sparta, New York, proved to be a cruel taskmaster. According to Fillmore's leading biographer Robert Rayback, Fillmore returned home "tearful and terrorized" after just four months. Nathaniel responded by finding another placement for his son in New Hope.

As an apprentice, Millard Fillmore attended to the mill machines. He is said to have felt lacking in mental stimulation. Though he had leaned to read, his reading material was confined to the Bible and a few spelling and reading books. When he was seventeen, some neighbors had organized a circulating library and this allowed Fillmore to expand his reading options. He also bought himself a dictionary which he made frequent use of.

Nathaniel's fortunes improved as he was chosen to serve in local offices including justice of the peace. In 1819, during a lull in activity at the mill, Fillmore enrolled at a new academy in New Hope. He was said to have enjoyed this opportunity at learning immensely. As Rayback writes: "For the first time, he heard a sentence parsed, for the first time he saw a map, and for the first time he began to experience the pleasure of female society." The female he most socialized with was Abigail Powers, who was two years older than him. Some biographies refer to her as a fellow student, others as a teacher. She was the daughter of a deceased Baptist minister and the sister of a local judge. Despite their differences in social status, the two fell in love.

Later in 1819, Nathaniel moved the family to Montville, where he became a tenant of Judge Walter Wood. Nathaniel convinced his new landlord, who was also the wealthiest person in the area, to allow Millard to be his law clerk for a two month trial period. Wood agreed to employ young Fillmore and to supervise him as he read law. This was done without first consulting Millard, though Fillmore's mother seemed very happy with the news. The next morning Millard Fillmore met his new mentor and his first assignment was to read a copy of Blackstone's Commentaries on the Law.

At the conclusion of the two month trial, Fillmore was due to return to the cloth mill in New Hope. Although Wood had not seemed to be encouraging toward his temporary clerk, Wood suggested that Fillmore return to study law. Fillmore explained that he lacked the funds to be able to do so, and Wood responded with a proposal of a loan, as well as some work at the businesses he owned. There was only one problem and that was Fillmore's apprenticeship. His employer at the cloth mill effectively owned Fillmore's work life until the young man turned twenty-one. Fillmore was able to work teaching school for three months and was able to buy out his mill apprenticeship.

Unfortunately things did not go well between Fillmore and Judge Wood. He left Wood's office after 18 months. The two had a falling out over how poorly the judge paid him. When Fillmore earned a small sum advising a farmer in a minor lawsuit, this upset Wood. Fillmore refused to promise not to do it again, and gave up his clerkship.

Nathaniel moved the family west to East Aurora, in Erie County, near Buffalo. He purchased a farm which became successful. Millard accompanied his family. In 1821, at age 21, Millard Fillmore taught school in East Aurora and accepted a few cases in justice of the peace courts, where he was not required to be a licensed attorney. He subsequently moved to Buffalo in 1822 where he continued his study of law, while teaching school. He joined the law office of Asa Rice and Joseph Clary. At that time he also became engaged to Abigail Powers. 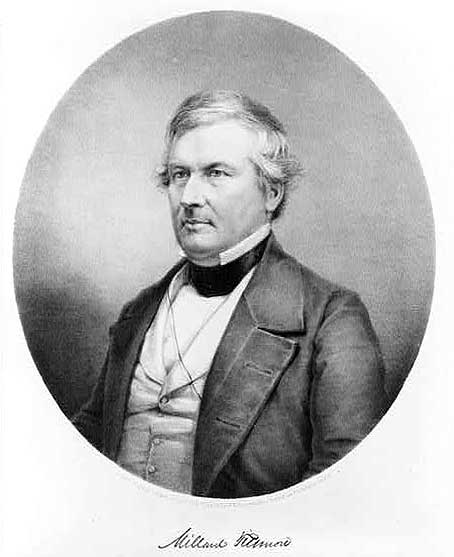 In 1823, he was admitted to the New York bar. He turned down offers from Buffalo law firms, and returned to East Aurora to establish a practice as the town's only resident lawyer. Biographer Paul Finkelman writes:

"Fillmore would explain that he chose this route because he lacked the self-confidence to practice in Buffalo. This insecurity reflected his impoverished youth, poor education, and the status decline of his family when they lost their land. He was a poor boy from the sticks. His father was an unsuccessful farmer. He only had a year or two of formal education beyond the rudimentary elementary schools of Cayuga County. He was well read and always striving to appear better read, but his education lacked any intellectual rigor. Throughout his life he was a consumer of books so that he could constantly educate himself. He was always impeccably dressed - perhaps the sign of a pretender trying to convince those around him that he belonged in polite society. He was and always would be cautious and conservative in his demeanor and style. Even in his personal life he must have been plagued by insecurities. It is true that he was a very handsome young man, but he was in love with a beautiful woman who came from a prominent, well-educated and comparatively sophisticated family. He was the son of a dirt farmer, a self-educated factory apprentice who had somehow become a lawyer."