In almost all rankings of Presidents, James Buchanan comes in dead last and wins the title of "worst president ever." One might think that he would escape obscurity for that reason alone. Partisans of whatever party the president of the day doesn't belong to might argue that whoever the current incumbent happens to be is worse than Buchanan, but it's hard to imagine anyone being a worse president than one who ended his term with fewer states than he began with, and who did nothing to prevent that from happening. It's ironic that when Buchanan began his presidency, many people believed that Buchanan had the perfect resumé to be president. Buchanan himself predicted that his presidency would rival that of George Washington. At the end of Buchanan's presidency, such a bold claim was laughable. Not surprisingly, the phrase "Worst President" is the part of the title of two recent biographies about Buchanan. Over a century after his death, his reputation has not rehabilitated itself. It only seems to have gotten worse. 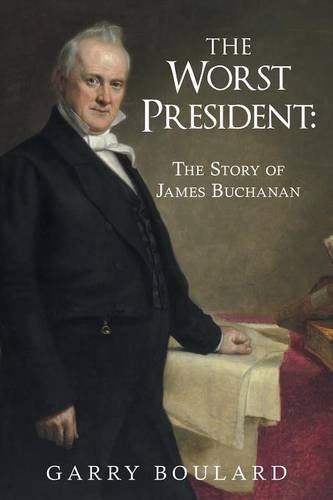 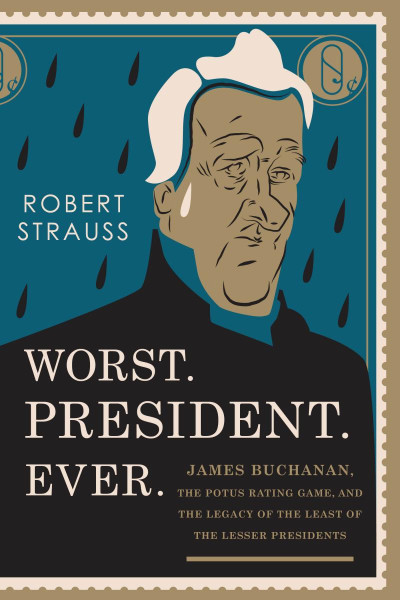 Buchanan was born in Cove Gap, Pennsylvania> His parents were of Ulster Scots descent. He became a prominent lawyer in Lancaster, Pennsylvania, and in 1814 he was elected to the Pennsylvania House of Representatives as a Federalist. In 1820, with the Federalist Party in shambles, Buchanan won election to the United States House of Representatives as a "Republican-Federalist". He joined Andrew Jackson's Democratic Party and in 1832 he was appointed as Jackson's Minister to Russia. Buchanan won election as a senator from Pennsylvania in 1834, and he continued to serve in the Senate until 1845, when he accepted appointment as President James K. Polk's Secretary of State. Buchanan was a leading candidate for his party's presidential nomination throughout the 1840s and 1850s, but never managed to catch the brass ring until 1856 when he finally won his party's nomination, defeating incumbent President Franklin Pierce and Senator Stephen A. Douglas at the 1856 Democratic National Convention. Buchanan and his running mate, John C. Breckinridge of Kentucky, defeated Republican John C. Frémont and Know-Nothing Party candidate Millard Fillmore to win the presidency.

Right from the start, Buchanan made some stunningly bad moves. Shortly after his election, he lobbied the Supreme Court to influence their decision in Dred Scott v. Sandford, something highly unethical both for a lawyer and for a president. When the decision was handed down as he had expected, he fully endorsed it as president. He also sided with slave owners in the South in attempting to gain the admission of Kansas to the Union as a slave state under the fraudulent Lecompton Constitution. In the process, he alienated both Republican abolitionists (who would have never voted for him anyhow) and northern Democrats (most of whom supported the concept of popular sovereignty in determining a new state's status). Buchanan was what was pejoratively called a "doughface", that is a northerner with southern sympathies. He fought with Stephen Douglas, the leader of the popular sovereignty faction, for control of the Democratic Party.

To add to Buchanan's woes, Buchanan took office just as the Panic of 1857 struck the nation. Buchanan had indicated at the time of his 1857 inaugural address, that he would not seek a second term, and he kept his word, likely realizing that he would never win re-election in any event. In the waning days of his Presidency, with news of Abraham Lincoln's victory as president, plans for secession by a number of slave states reached a boiling point. In his final message to Congress, everyone expected that Buchanan would show some leadership and deal with the question. He dithered instead. In his message, Buchanan said that states had no legal right to secede. But he also said that the federal government do do nothing to stop them. He blamed the crisis on "intemperate interference of the Northern people with the question of slavery in the Southern States". His only suggestion to solve the crisis was "an explanatory amendment" reaffirming the constitutionality of slavery in the states, the fugitive slave laws, and popular sovereignty in the territories. Like Fillmore and Pierce, Buchanan failed to see slavery as a moral issue.

South Carolina, the most radical southern state, seceded from the union on December 20, 1860. He refused to fire Secretary of War John B. Floyd and before resigning, Floyd sent numerous firearms to southern states, where they would eventually fall into the hands of the Confederate soldiers to be used against the Union. Efforts were made by eminent statesmen such as Sen. John J. Crittenden, Rep. Thomas Corwin, and former president John Tyler to negotiate a solution to stop secession all failed.

By the end of January, 1861, six more slave states had seceded. Buchanan considered surrendering Fort Sumter, but his new cabinet members threatened to resign. On January 5, Buchanan finally decided to reinforce Fort Sumter, sending the Star of the West with 250 men and supplies. However, the ship was fired upon, and it was forced to return North without delivering troops or supplies. Buchanan chose not to respond to this act of war. But on March 4, Buchanan was succeeded by Lincoln, who was left to deal with the emerging sectional crisis that eventually became the Civil War. He reportedly told Lincoln on the ride back from Lincoln's inauguration, "Sir, if you are as happy in entering the White House as I shall feel on returning to Wheatland, you are a happy man indeed."

Buchanan supported the North during the Civil War and called on his fellow Pennsylvanians to enlist. Buchanan spent most of his remaining years defending himself from public blame for the war, which some referred to as "Buchanan's War". He received angry and threatening letters daily, and stores were displaying Buchanan's likeness with the eyes inked red, a noose drawn around his neck and the word "TRAITOR" written across his forehead. Newspapers accused him of colluding with the Confederacy. He published his memoir "Mr. Buchanan's Administration on the Eve of Rebellion" in 1866 in which he made a feeble attempt to defend his actions. He died on June 1, 1868, from respiratory failure at the age of 77 at his home at Wheatland and was interred in Woodward Hill Cemetery in Lancaster. He was the last president to be born in the eighteenth century. He is the only president to remain a lifelong bachelor.

Part of Buchanan's legacy is the speculation that he may have been gay. (Just this month a book written by Thomas Balcerski entitled Bosom Friends: The Intimate World of James Buchanan and William Rufus King explores this theory.) Buchanan had a close and intimate relationship with King, an Alabama politician who briefly served as vice president under Franklin Pierce. Buchanan and King lived together in a Washington boardinghouse for many years, from 1834 until King left to become Ambassador to France in 1844. King referred to the relationship as a "communion". The two men attended social functions together. Andrew Jackson called King "Miss Nancy" and Tennessee Democrat Aaron V. Brown referred to King as Buchanan's "better half", his "wife" and "Aunt Fancy" (the last term being a 19th-century euphemism for an effeminate man). Buchanan wrote a letter acknowledging that he might marry a woman who could accept his "lack of ardent or romantic affection". Catherine Thompson, the wife of cabinet member Jacob Thompson, wrote that "there was something unhealthy in the president's attitude". The nieces of the two men may destroyed some correspondence between them, and it is likely that the best evidence to aid in deciding this question has been destroyed.

On May 31, 1868, the day before he died, James Buchanan predicted that "history would vindicate my memory". He was wrong about that. Historians criticize Buchanan for his unwillingness or inability to act in the face of secession. Historians fault Buchanan for his failure to address the issue of slavery and the secession of the southern states. His dithering on the issue sharply divided pro-slavery and anti-slavery factions. Historians who participated in a 2006 survey voted his failure to deal with secession as the worst presidential mistake ever made.Historical rankings of United States Presidents, considering presidential achievements, leadership qualities, failures and faults, consistently place Buchanan among the least successful presidents. In many of these polls, Buchanan is ranked as the worst president in U.S. history.

Buchanan's most charitable biographer, Philip Klein, notes the challenges Buchanan faced, writing that "Buchanan assumed leadership when an unprecedented wave of angry passion was sweeping over the nation. That he held the hostile sections in check during these revolutionary times was in itself a remarkable achievement. His weaknesses in the stormy years of his presidency were magnified by enraged partisans of the North and South. His many talents, which in a quieter era might have gained for him a place among the great presidents, were quickly overshadowed by the cataclysmic events of civil war and by the towering Abraham Lincoln."

Biographer Jean Baker is more blunt. "Buchanan's failing during the crisis over the Union was not inactivity, but rather his partiality for the South, a favoritism that bordered on disloyalty in an officer pledged to defend all the United States. He was that most dangerous of chief executives, a stubborn, mistaken ideologue whose principles held no room for compromise. His experience in government had only rendered him too self-confident to consider other views. In his betrayal of the national trust, Buchanan came closer to committing treason than any other president in American history." 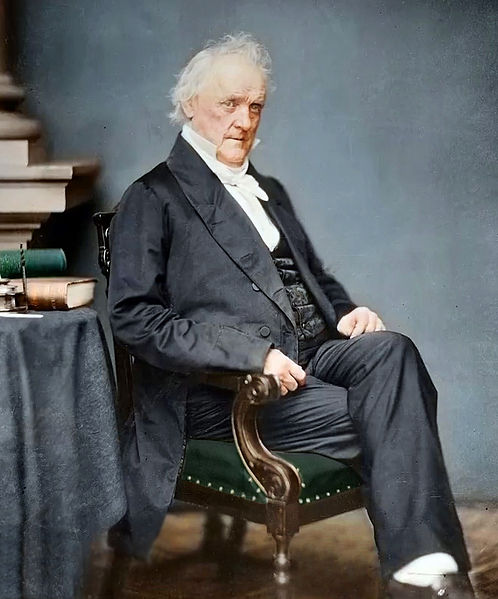 Today a bronze and granite memorial to Buchanan can be found near the southeast corner of Washington, D.C.'s Meridian Hill Park. It was designed by architect William Gorden Beecher and sculpted by Maryland artist Hans Schuler. Commissioned in 1916 it was unveiled on June 26, 1930. The memorial features a statue of Buchanan bookended by male and female classical figures representing law and diplomacy, with the engraved text reading: "The incorruptible statesman whose walk was upon the mountain ranges of the law." An earlier monument to Buchanan was dedicated in 1911, on the site of Buchanan's birthplace in Stony Batter, Pennsylvania.
Collapse