One of the most interesting and likeable third-party candidates for President was Eugene Victor Debs, a labor leader who ran for President four times under the banner of the American Social Democratic Party. Debs was one of the founders the party. He was the Socialist Party's candidate for president in 1904, 1908, 1912, and 1920. The final time he ran his campaign from a prison cell in Atlanta where he was known as Convict 9653. 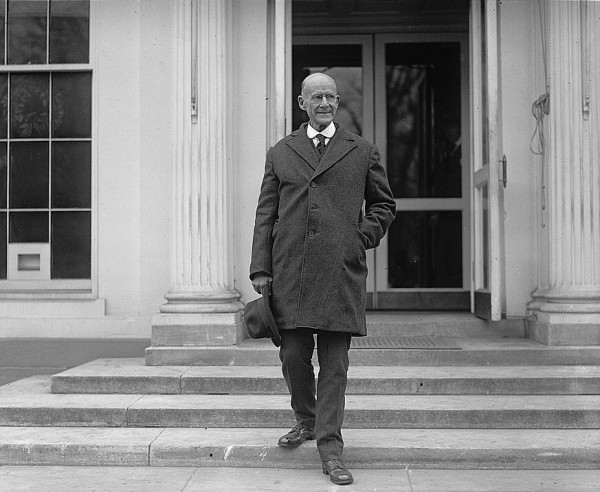 Eugene Victor "Gene" Debs was born on November 5, 1855 in Terre Haute, Indiana. As a young man he worked in the railroad industry, first as a painter and car cleaner. In December 1871 he left the railroad yards for work on the railways as a locomotive fireman. In July 1875, he left to work at a wholesale grocery house, where he remained for the next four years, attending a local business school at night. Debs had joined the Brotherhood of Locomotive Firemen (BLF) in February 1875 and became active in this fraternal benefit organization. He rose through the ranks of the union and in 1880 he was appointed Grand Secretary and Treasurer of the BLF.

At the same time, he became a prominent figure in the community. He served two terms as Terre Haute's city clerk from September 1879 to September 1883. In the fall of 1884, he was elected to the Indiana General Assembly as a Democrat, serving for one term. Debs was instrumental in the founding of the American Railway Union (ARU), one of the nation's first industrial unions. After workers at the Pullman Palace Car Company organized a wildcat strike over pay cuts in the summer of 1894, Debs signed many into the union. He called for a boycott of the ARU against handling trains with Pullman cars, in what became the nationwide Pullman Strike, affecting most lines west of Detroit, and more than 250,000 workers in 27 states. To keep the mail running, President Grover Cleveland used the United States Army to break the strike. As a leader of the ARU, Debs was convicted of federal charges for defying a court injunction against the strike and served six months in prison.

Debs read the works of Karl Marx and learned about socialism in prison, emerging to launch his career as the nation's most prominent Socialist in the first decades of the 20th century. 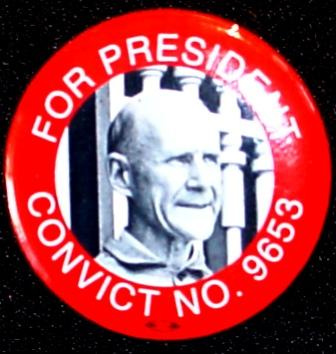 On April 4, 1917, President Woodrow Wilson received strong bipartisan support for a declaration of war by the United States against Germany. It was signed by Wilson on April 6, 1917. But the nation's entry into the war was not universally accepted. Antiwar groups, anarchists, communists, Industrial Workers of the World members, and other antiwar groups began to voice their opposition. Many of these groups were targeted by Wilson's Department of Justice. Wilson established the United States Committee on Public Information, headed by George Creel, (also known as the "Creel Commission"), which circulated patriotic anti-German appeals and conducted censorship of materials considered seditious.

To further combat disloyalty to the war effort at home, Wilson pressured Congress to pass the Espionage Act of 1917 and the Sedition Act of 1918 to suppress anti-British, pro-German, or anti-war statements. He called for the arrest and deportment of foreign-born enemies. Many recent immigrants or resident aliens without U.S. citizenship, who opposed America's participation in the war, were deported to Russia or other nations under the powers granted in the Immigration Act of 1918. The Espionage Act of 1917 made it a crime to interfere with the war effort or with military recruitment or to attempt to aid a nation at war with the U.S.

The act was opposed in the Senate, almost entirely from Republicans, but from both wings of the party. Henry Cabot Lodge called the legislation an attack on free speech. Hiram Johnson criticized Wilson for failing to use the laws already in place. Former president Theodore Roosevelt voiced opposition as well. Despite the criticism from such notable figures, the final vote for passage was 48 to 26 in the Senate and 293 to 1 in the House of Representatives, with the sole dissenting vote in the House cast by Meyer London of New York. The legislation came late in the war, just a few months before Armistice Day, and prosecutions under the provisions of the Sedition Act were few.

The Sedition Act of 1918 extended the Espionage Act of 1917 to cover a broader range of offenses, notably speech and the expression of opinion that cast the government or the war effort in a negative light or interfered with the sale of government bonds. The Sedition Act of 1918 prohibited the use of "disloyal, profane, scurrilous, or abusive language" about the United States government, its flag, or its armed forces or that caused others to view the American government or its institutions with contempt. Those convicted under the act generally received sentences of imprisonment for five to 20 years. The act also allowed the Postmaster General to refuse to deliver mail that met those same standards for punishable speech or opinion. Though the legislation enacted in 1918 is commonly called the Sedition Act, it was actually a set of amendments to the Espionage Act.

One of the most famous prosecutions under this legislation concerned Debs, who was the Socialist Party leader and its prospective presidential candidate. In June of 1918, Debs was arrested for violating the Sedition Act by undermining the government's conscription efforts. He was sentenced to ten years in prison. He served his sentence in the Atlanta Federal Penitentiary from April 13, 1919, until December 1921, when President Warren Harding commuted Debs' sentence to time served, effective on December 25, Christmas Day.

Debs and the Socialists opposed the war, and especially the draft. They saw the war in terms of class struggle, one in which poor men went off to die in wars so that rich men could prosper. Wilson and leading members of his cabinet were able to convince Congress to pass the Sedition Act, legislation that drastically limited what critics of the war were able to say. Government censors were able to shut down the socialist message using post office censorship and arrest of those advocating open resistance to the draft and other opposition to the war, often on questionable or spurious grounds. At first Debs was able to avoid arrest, but as public pressure mounted from supporters of the war, Debs was arrested following a speech he made in Cleveland. Author Ernest Freeburg in his book Democracy's Prisoner: Eugene V. Debs, The Great War and the Right to Dissent, (reviwed here in this community) argues that one must contort what Debs actually said to find it offensive to the law.

A remarkable aspect of the story of Eugene V. Debs is how the Socialist leader was able to win the respect of the wardens of both institutions that he was incarcerated in, as well as of the inmates, even though political dissenters were considered to be a lower caste in the prison system at the time. Debs was described in near-sainted terms and was allowed to work in the prison hospital and afforded liberties not offered to other inmates. Remarkably, he was even allowed to run for President as the nominee for the Socialist Party in the 1920 election, while still bearing the label "Convict 9653".

It was in 1920, when Debs was an inmate in an Atlanta federal prison, that Debs received his greatest number of votes, 913,693. He never won a single electoral vote in any of the elections, but was a very popular inmate, loved both by inmates and prison staff. According to historian David Pietrusza, in his wonderful book 1920: The Year of Six Presidents, Debs was a very kind man who organized a number of programs for the health and welfare of the other inmates. Pietrusza describes Debs in saint-like terms. The Warden appreciated how Debs was able to pacify and help the other inmates. He gratefully accommodated Debs' campaigning from his prison cell. When Debs was released from the Atlanta Penitentiary, the other prisoners sent him off with "a roar of cheers" and a crowd of 50,000 greeted his return to Terre Haute to the accompaniment of band music.

President Warren G. Harding commuted Debs sentence to one of time served so that Debs could be released in time for Christmas of 1921. Harding did not issue a pardon. The White House released a statement saying this about Debs' case:

"There is no question of his guilt....He was by no means as rabid and outspoken in his expressions as many others, and but for his prominence and the resulting far-reaching effect of his words, very probably might not have received the sentence he did. He is an old man, not strong physically. He is a man of much personal charm and impressive personality, which qualifications make him a dangerous man calculated to mislead the unthinking and affording excuse for those with criminal intent."

On the way home to Terre Haute, Debs was warmly received at the White House by President Harding, who greeted him by saying: "Well, I've heard so damned much about you, Mr. Debs, that I am now glad to meet you personally." 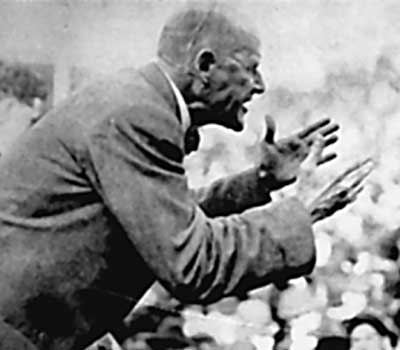 In 1924, Debs was nominated for the Nobel Peace Prize by the Finnish Socialist Karl H. Wiik on the grounds that "Debs started to work actively for peace during World War I, mainly because he considered the war to be in the interest of capitalism." But by the time of his release, Debs' health was not so good. In the fall of 1926, Debs was admitted to Lindlahr Sanitarium in Elmhurst, Illinois where he died of heart failure on October 20, 1926, at the age of 70.

Advocates of the right to free speech owe much to Eugene Victor Debs.
Collapse