In 1944, as the Second World War was into its fifth year, many expected that Franklin Delano Roosevelt's presidency was coming to a close, as they hoped the war was. Although Roosevelt was only 62 years old, he looked much older. The war and the other pressures he was under had taken their toll on him physically. Many were shocked when four years earlier he had run for a third term as President, breaking an as yet unwritten rule set by George Washington to limit the office to a maximum of two terms. As he had been in 1940, Roosevelt was coy about his plans. 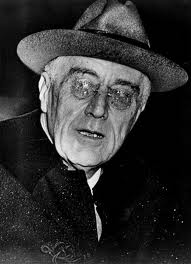 Roosevelt had been a chain-smoker throughout his entire adult life, and signs of his declining physical health began to show as early as 1940. In March 1944, shortly after his 62nd birthday, he underwent testing at Bethesda Hospital and was found to have high blood pressure, atherosclerosis, coronary artery disease causing angina pectoris, and congestive heart failure. Hospital physicians and two outside specialists ordered Roosevelt to rest. His personal physician, Admiral Ross McIntire, set up a daily schedule for the President that banned business guests for lunch and scheduled two hours of rest each day.

A poll was taken by the father of political polling, George Gallup, in 1943 which suggested that if the war was over by the time the election came, the Republican candidate would command a strong lead, but if the war was still raging on, FDR would win. That seemed like a strange dynamic. But nevertheless Roosevelt let it be known that he would be running for re-election in November of 1944. Roosevelt faced no serious opposition for his party's nomination. With the country's active involvement in World War II and the resulting need for stable leadership, these concerns seemed to trump any issue about his remaining in office for four more years. Some Southern delegates who were opposed to Roosevelt's racial policies tried to draft Virginia senator Harry F. Byrd to run for the nomination, but Byrd decided against actively campaigning against the President. Roosevelt won the nomination easily.

The real issue at the Democratic convention was who FDR's running mate would be. Delegates realized that there was a good chance that Roosevelt would not live out another term in office, and that they weren't just choosing a Vice-Presidential candidate, but quite possibly the next President. Henry Wallace had been elected Vice President in 1940. He was very popular with rank and file Democratic voters, but conservative Party leaders, such as James F. Byrnes, strongly opposed his renomination. They regarded Wallace as being too far to the left, too "progressive" and too friendly to labor to be next in line for the Presidency. A number of party bosses wanted to keep Wallace off the ticket. They privately told Roosevelt that they would fight Wallace's renomination. One of the candidates who had the support of the bosses as well as Roosevelt himself was Missouri Senator Harry S. Truman. Truman had entered the Senate in January 1935 with a reputation as "the senator from Pendergast" (named for the Missouri political boss Tom Pendergast that many believed Truman was in the pocket of). Truman had rehabilitated his reputation when he became the chairman of a Senate investigating committee investigating waste and corruption in war costs. Roosevelt personally liked Wallace, but he agreed to accept Truman as his new running mate to preserve party unity.

Roosevelt traveled to the South Pacific in order to discuss military strategy with General Douglas MacArthur, and avoided attending the convention. At the convention, many delegates refused to abandon Wallace. In the first ballot, Wallace led with 429.5 votes and Truman got 319.5 votes. But Wallace was 159.5 votes short of a majority. The party leaders went to work on the delegates, and Truman won the second ballot by 1031 votes to 105. This would have tremendous historic consequences as FDR died in April 1945, and Truman, not Wallace, thus became the nation's 33rd President. 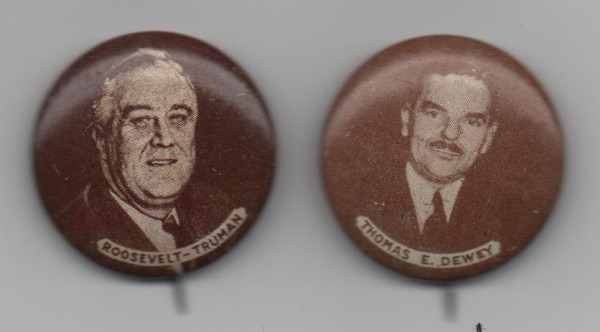 As 1944 began, the front runners for the Republican nomination appeared to be Wendell Willkie, the party's 1940 nominee, Senator Robert A. Taft of Ohio, the leader of the party's conservative wing, and New York Governor Thomas E. Dewey, the leader of the party's moderate eastern establishment. General Douglas MacArthur, then serving as an Allied commander in the Pacific theater of the war, and former Minnesota Governor Harold Stassen, then serving as a U.S. naval officer in the Pacific were also considered for the nomination. Taft surprised many by announcing that he would not seek the nomination. He threw his support behind fellow conservative, Governor John W. Bricker of Ohio. Willkie also withdraw as a candidate after performing poorly in the primaries. He died suddenly in early October 1944, without endorsing anyone for president. At the 1944 Republican National Convention in Chicago, Illinois, Dewey was nominated for president on the first ballot and he chose the conservative Bricker as his running mate.

In the general election the Republicans campaigned against the New Deal. They called for a smaller government and a less-regulated economy, arguing that the end of the war was in sight. But Roosevelt's continuing popularity seemed to be an insurmountable obstacle to victory for the GOP. To counter this, the Republicans made an issue out of FDR's poor health. FDR was looking very run down and rumors of his poor health were spreading. His weight loss and haggard appearance was apparent to all, both within his party and among his opponents. His hands shook so badly that Harry Truman recalled that Roosevelt was unable to make his own coffee.

During the 1944 re-election campaign, FDR's physician, Admiral Ross McIntire, denied several times that Roosevelt's health was poor, even though he knew that this was not the case. On October 12, for example, he announced that "The President's health is perfectly OK. There are absolutely no organic difficulties at all." Roosevelt knew that his declining health could eventually make it impossible for him to continue as president, and he privately told a confidant that he might resign from the presidency following the end of the war. To avoid being seen in public, Roosevelt spoke on radio quite often. He used war planning as an excuse to avoid public appearances. While preparing to oversee a military exercise at San Diego’s Camp Pendleton in July 1944, FDR had a seizure. This happened just as the Democratic National Convention was taking place. Roosevelt delivered his acceptance speech to the convention over the radio and only a handful of his closest aides knew about his seizure.

To try to silence doubters on this issue and surprise his critics, Roosevelt insisted on making a vigorous campaign swing in October. He rode in an open car through city streets, including one memorable address on a very rainy night in New York City. A special ramp was constructed for Roosevelt's car to drive up so that he didn't have to get out of the vehicle to speak. One of his most memorable speeches during the campaign was made by Roosevelt to a group of labor union leaders. The speech was carried on national radio. In the speech he ridiculed Republican claims that his administration was corrupt and wasteful with tax money. He lampooned a Republican claim that he had sent a US Navy warship to pick up his Scottish Terrier Fala in Alaska, telling his audience. "Fala was furious" at such rumors. His audience reacted with loud laughter and applause.

Dewey gave a blistering partisan speech in Oklahoma City, Oklahoma, a few days later on national radio, in which he accused Roosevelt of being "indispensable" to corrupt big-city Democratic organizations and American Communists. However, this was ineffective, as American battlefield successes in Europe and the Pacific during the campaign translated into support for Roosevelt. The liberation of Paris in August 1944 and the successful Battle of Leyte Gulf in the Philippines in October 1944, made Roosevelt unbeatable. 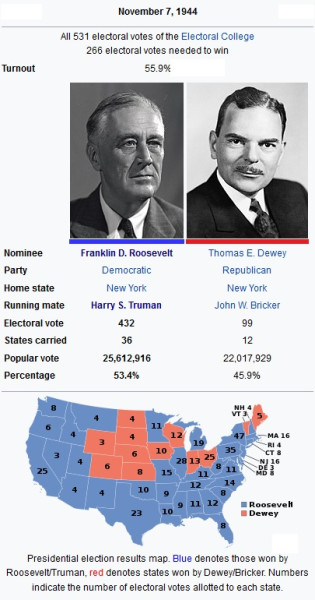 Throughout the campaign, Roosevelt led Dewey in all the polls by varying margins and the Roosevelt campaign always seemed to find a way to distract voters from any suggestion that Roosevelt was in too poor health to be president, or that he had served for too long. On election day, FDR won a comfortable victory over his Republican challenger. Roosevelt won 36 states for 432 electoral votes, while Dewey won 12 states and 99 electoral votes. In the popular vote Roosevelt won 25,612,916 (53.4%) votes to Dewey's 22,017,929 (45.9%)

Franklin Delano Roosevelt was inaugurated as president for the fourth and final time on January 20, 1945, just 10 days before his 63rd birthday. Less than three months later, he was dead.
Collapse