Franklin Roosevelt's rise to the presidency is truly a remarkable one. It is not remarkable that a man who was governor of what was then the largest state in the nation should be considered a leading contender for his party's presidential nomination. The fascinating aspect of this story begins eleven years earlier, on an island in Canada. 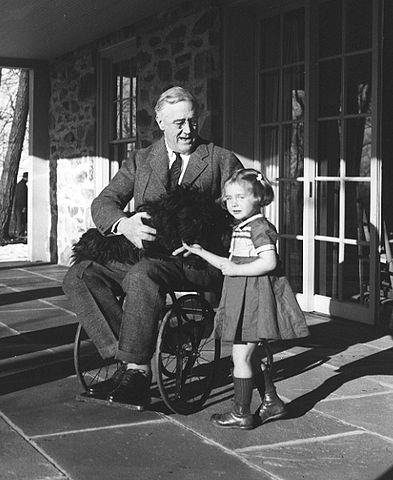 While Franklin Roosevelt and his family were vacationing in August of 1921 at Campobello Island (part of the Canadian province of New Brunswick, north of Maine), he fell ill. His major symptoms were a very bad fever, paralysis along his sides and limbs, facial paralysis, bowel and bladder dysfunction, and numbness. He was left permanently paralyzed from the waist down. He was diagnosed with poliomyelitis at the time, but his symptoms are now thought to be more consistent with Guillain–Barré syndrome, an autoimmune disorder.

Roosevelt was encouraged by his mother Sarah to retire from public life. But his wife Eleanor, his close friend and adviser Louis Howe, and Roosevelt himself were all determined for Roosevelt to continue his political career. Roosevelt left people with the false impression that his health was improving, realizing how important this perception was to and future run for public office that he might make. He taught himself how to walk short distances while wearing iron braces on his hips and legs by swiveling his torso, and by supporting himself with a cane. It took a significant amount of his strength to be able to do this. Roosevelt was careful never to be seen using his wheelchair in public. Efforts were made to prevent any portrayal of him in the media that would display his physical disability. He usually appeared in public standing upright, supported on one side by an aide or one of his sons.

In 1925, Roosevelt began to spent a lot of time in the southern United States. He was convinced that there were potential benefits for persons like him by using hydrotherapy. Roosevelt established a rehabilitation center at Warm Springs, Georgia, in 1926. He assembled a staff of physical therapists and purchase the Merriweather Inn as the location for the center. In 1938, Roosevelt founded the National Foundation for Infantile Paralysis, leading to the development of polio vaccines.

Roosevelt remained politically active with the Democratic Party and he remained active in New York politics even while he was in Georgia. Roosevelt issued an open letter endorsing Al Smith's successful campaign in New York's 1922 gubernatorial election. Although he and Smith never fully trusted one another, Roosevelt supported Smith's progressive policies and Smith was happy to have Roosevelt's endorsement. Roosevelt gave presidential nominating speeches for Smith at the 1924 and 1928 Democratic National Conventions. His speech at the 1924 convention marked his return to public life following his illness. 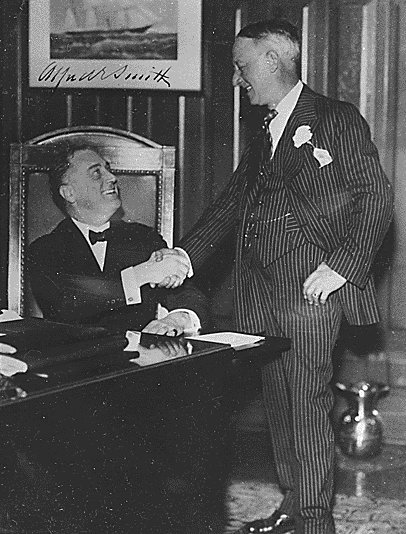 After he became the Democratic Party presidential nominee in 1928, Smith asked Roosevelt to run for governor in the state election. Roosevelt initially was afraid of a Republican landslide in 1928, but he agreed to run when party leaders urged him that he was the only person who could defeat the Republican gubernatorial nominee, New York Attorney General Albert Ottinger. Roosevelt won the party's gubernatorial nomination by acclamation. He turned to Louis Howe to lead his campaign. Smith lost the presidency in a landslide, and was even defeated in his home state. But Roosevelt was elected governor by a 1% margin. Roosevelt's election as governor of the most populous state immediately made him a contender in the next presidential election.

Roosevelt and his wife Eleanor established a strong political partnership, even though their marital relationship was injured by his infidelity. Eleanor agreed that she would dutifully serve as the governor's wife, while pursuing her own interests. It was as Governor of New York that Roosevelt began his practice of having "fireside chats", radio addresses in which he directly addressed his constituents, in order to advance his legislative agenda.

In October 1929, the Wall Street Crash occurred, and the country began its descent into the Great Depression. While President Hoover and many state governors initially believed that the economic crisis would be brief, Roosevelt believed that the problem was much more serious. He established a state employment commission. He also became the first governor to publicly endorse the idea of unemployment insurance. In seeking re-election in 1930, Roosevelt ran on a platform that called for aid to farmers, full employment, unemployment insurance, and old-age pensions. His Republican opponent had the millstone of public criticism of the Republican Party during the economic downturn, and Roosevelt was elected to a second term by a 14% margin. As the Hoover administration resisted proposals to directly address the economic crisis, Roosevelt proposed and economic relief package and the establishment of the Temporary Emergency Relief Administration to distribute those funds. This agency assisted over one-third of New York's population between 1932 and 1938.

As the 1932 presidential election approached, Roosevelt turned his attention to national politics. He established a campaign team led by Louis Howe and James Farley. With the economy in rough shape, Democrats hoped that the 1932 elections would result in the election of the first Democratic president since Woodrow Wilson. Roosevelt's re-election as governor had established him as the front-runner for the 1932 Democratic presidential nomination.

A savvy politician, Roosevelt drew support from progressive supporters of the Wilson administration, as well as many conservatives. He had made political connections while in the south and he soon became the leading candidate. His main in the South and West. The chief opposition came from he former ally Al Smith. Smith hoped to prevent Roosevelt from winning the two-thirds support necessary for the party's presidential nomination at the 1932 Democratic National Convention in Chicago.

Roosevelt entered the convention with a delegate lead due to his success in the 1932 Democratic primaries. Sixteen states had held primaries that year and Roosevelt had won eleven of these and finished second in the rest. Smith had only won two state primaries and two state caucuses. He had also finished first in 18 of the state caucuses. While this established Roosevelt's popularity, most delegates entered the convention unbound to any particular candidate. On the first presidential ballot of the convention, Roosevelt received the votes of more than half of the delegates, but did not reach the two-thirds threshold required for the nomination. Smith finished in a distant second place. The tally was 666.25 for Roosevelt, 201.75 for Smith and 90.25 for Speaker of the House John Nance Garner of Texas. 197.75 votes were spread among remaining candidates.

Garner had support from two powerful individuals, California newspaper magnate William Randolph Hearst and Senator William Gibbs McAdoo. His support came primarily from two states: his home state of Texas and from California. Although he could not win the nomination, he had enough support to push Roosevelt over the top if he wished. After three ballots, Roosevelt had not secured the 770 votes needed to win the nomination. His campaign worried that this would be as good as it got. But Roosevelt's campaign was able to persuade Garner to release his delegates to vote for Roosevelt. Hearst disliked Roosevelt but hated Smith even more. McAdoo, who himself had been denied nomination by the two thirds rule at the 1924 convention, announced that California would back Roosevelt. Roosevelt received 945 votes on the fourth ballot. Smith finished second with 190. Garner was chosen as the vice-presidential candidate. McAdoo had hoped to be on the ticket, but this was opposed by Hearst.

Roosevelt flew in from New York after learning that he had won the nomination, becoming the first major-party presidential nominee to accept the nomination in person. In his acceptance speech, Roosevelt told the crowd, "I pledge you, I pledge myself to a new deal for the American people. This is more than a political campaign. It is a call to arms." 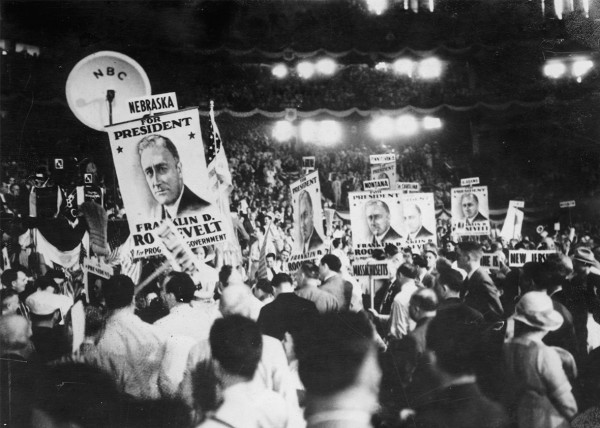 Roosevelt promised securities regulation, tariff reduction, farm relief, government-funded public works, and other government actions to address the Great Depression. The Democratic platform also included a call for the repeal of Prohibition, an issue that Roosevelt himself had not taken a public stand on.

After the convention, Roosevelt won endorsements from several progressive Republicans, including George W. Norris, Hiram Johnson, and Robert La Follette Jr. Al Smith reluctantly agreed to support FDR. Roosevelt's chances to win the election got a boost when President Hoover was criticized for his handling of the Bonus Army march on Washington, despite the fact that his orders against the use of force towards the protesters was ignored by General Douglas MacArthur.

Roosevelt won the election in a landslide, winning 57% of the popular vote and carrying all but six states. Roosevelt's victory was the product of a new alliance, dubbed the New Deal coalition, composed of support from farmers, the Southern whites, Catholics, big city political machines, labor unions, northern African Americans (those in the south were still disfranchised), Jews, intellectuals, and political liberals.
Collapse