Nelson Aldrich Rockefeller was the grandson of the famous oil magnate and industrialist John D. Rockefeller, and the son of John D. Rockefeller Jr. He would go on to serve as the 41st Vice President of the United States from 1974 to 1977, the second person to hold that office without being elected to it. He had also served as the 49th Governor of New York from 1959 to 1973 and had previously been Assistant Secretary of State for American Republic Affairs for Democratic Presidents Franklin D. Roosevelt and Harry S. Truman as well as Under-Secretary of Health, Education and Welfare under Dwight D. Eisenhower. He was rich and was a noted art collector and served as administrator of Rockefeller Center in Manhattan, New York. 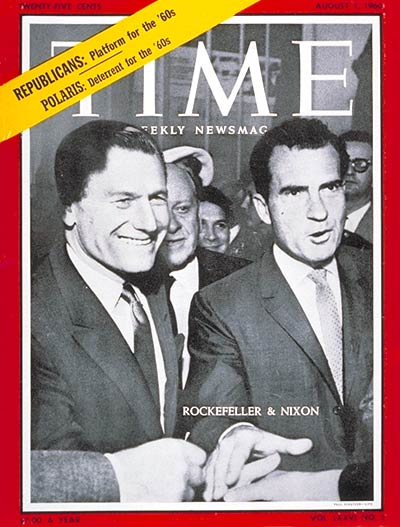 Even by the standards of his day, Rockefeller was often seen as too liberal to be a Republican. He was usually described by one of three adjectives: liberal, progressive, or moderate. In his day, liberals in the Republican Party were called "Rockefeller Republicans". As Governor of New York from 1959 to 1973, Rockefeller's achievements included the expansion of the State University of New York, increased facilities and personnel for medical care, and the creation of the New York State Council on the Arts.

He ran unsuccessfully for the Republican presidential nomination in 1960, 1964, and 1968. Even a half a century ago, it was tough for a liberal to lead the Republican Party. Biographers have written that Rockefeller took a pragmatic approach to governing, and did not give a damn about ideology. According to the authors of the book Rockefeller of New York: Executive Power in the State House, by Robert Connery and Gerald Benjamin, "Rockefeller was not committed to any ideology. Rather, he considered himself a practical problem solver, much more interested in defining problems and finding solutions around which he could unite support sufficient to ensure their enactment in legislation than in following either a strictly liberal or strictly conservative course. Rockefeller's programs did not consistently follow either liberal or conservative ideology."

Rockefeller was opposed by conservatives in the his party, such as Barry Goldwater and Ronald Reagan, who believed that his political views were too liberal. As governor, Rockefeller spent more than his predecessors. Rockefeller expanded the state's infrastructure, increased spending on education including a massive expansion of the State University of New York, and increased the state's involvement in environmental issues. Rockefeller had good relations with unions, especially the construction trades, which benefited from his extensive building programs.

His bid in the 1960 primary ended early when then-Vice President Richard Nixon surged ahead in the polls. After quitting the campaign, Rockefeller backed Nixon and concentrated his efforts on introducing more moderate planks into Nixon's platform. Rockefeller made his most serious bid for the nomination in 1964 as the leader of the Republicans' "Eastern Establishment". He began as the front-runner for the nomination against conservative Senator Barry Goldwater of Arizona, who led the right wing of the Republican Party. But in 1963, a year after Rockefeller's divorce from his first wife, he married Margaretta "Happy" Murphy, a divorcee with four children. This is cited as a reason for his downfall in an era when politicians did not get divorced. The divorce was widely condemned by politicians, even by other liberal Republicans like Senator Prescott Bush of Connecticut, who condemned Rockefeller for his infidelity, divorce, and remarriage. Rockefeller finished third in the New Hampshire primary in March, behind write-in Henry Cabot Lodge from Massachusetts, and Goldwater. He did poorly in several more of the party primaries before winning an upset in Oregon in May. Rockefeller took a strong lead in the California primary, and his campaign was so confident of victory that it cut advertising funds in the last days of his campaign. However, the birth of Rockefeller's child three days before the California primary put the divorce and remarriage issue back front and center in the news cycle and inn the minds of voters. On primary election day, Rockefeller narrowly lost the California primary and dropped out of the race.

At the Republican National Convention in San Francisco in July, Rockefeller was given five minutes to speak before the convention in defense of five amendments to the party platform put forth by the moderate wing of the Republican Party. He was booed and heckled for sixteen minutes while he stood firmly at the podium insisting on his right to speak. As a result, Rockefeller was reluctant to support Goldwater in the general election. Their animosity would endure, as Goldwater would subsequently vote against Rockefeller's confirmation for the Vice Presidency in 1974 and was also a key player in blocking Rockefeller from being on the 1976 presidential ticket.

Rockefeller once again sought the presidential nomination in the 1968 primaries. His opponents were Nixon and Governor Ronald Reagan of California. In the contest, Rockefeller again represented the liberals, Reagan represented the conservatives, and Nixon representing moderates and liberals also. At first Rockefeller was reluctant to run and looked for another moderate to support. Initially, that was Michigan Governor George Romney. When Romney officially announced his decision to run for President on November 18, 1967, at the Veteran's Memorial Building in Detroit, Michigan, all of Nelson Rockefeller's top political aides from the 1964 Presidential campaign went to work for Romney. At first, Romney looked presidential and he enjoyed the support of most of the other Republican governors, who were determined not to repeat the 1964 Barry Goldwater disaster. Rockefeller supported Romney and a Harris Poll showed Romney besting President Lyndon Johnson among all voters by 54 percent to 46 percent. Then Romney stumbled.

Romney's campaign floundered after he made a statement on an ABC news show alleging that he had changed his mind about supporting the government's prosecution of the Vietnam War because he had been "brainwashed" by the US Generals about the war. Suddenly Romney's poll numbers plummeted. Two weeks before the March 12 primary, an internal poll showed Romney losing to Nixon by a six-to-one margin in New Hampshire. Rockefeller, reading the writing on the wall and seeing the poll results, publicly maintained his support for Romney but also said he would be available for a draft. The statement drew national media coverage and embittered Romney. Now believing that his candidacy was hopeless, Romney announced his withdrawal as a presidential candidate on February 28, 1968. This surprised political observers, who thought that Romney would at least stay in through the New Hampshire and Wisconsin primaries.

Anti-war Republicans wrote in Rockefeller's name in the New Hampshire Primary and he received 11% of the vote and became Nixon's new challenger. Nixon led Rockefeller in the polls throughout the primary campaign. Rockefeller defeated Nixon and Governor John Volpe in the Massachusetts primary on April 30, but he otherwise fared poorly in state primaries and conventions because he had declared his candidacy too late to get his name on many state ballots. He hadn't formally announced his candidacy and enter the state primaries, and had spent the first half of 1968, alternating between hints that he would run and pronouncements that he would not be a candidate. It wasn't until shortly before the Republican convention, when Rockefeller finally let it be known that he was available to be the nominee of his party.

Rockefeller had hoped that he would round up enough uncommitted delegates and woo reluctant Nixon delegates to his cause on a second ballet. He touted public opinion polls that showed him doing better among voters than either Nixon or conservative Ronald Reagan against Democrat Hubert Humphrey. But it was too little, too late. Rockefeller's plan required that there would be a second ballot so that disaffected Nixon supporters could defect to his cause. Despite Rockefeller's efforts, Nixon won the nomination on the first ballot. Nixon narrowly secured the nomination on the first ballot, with help from segregationist South Carolina Senator Strom Thurmond, who had switched parties in 1964. 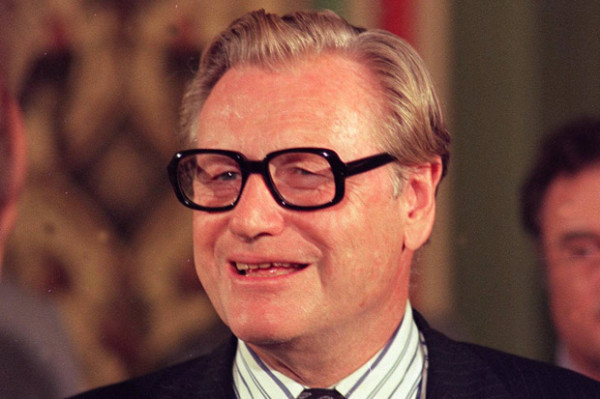 Rockefeller never made it to the Oval Office as President, but he did become Vice-President following Nixon's resignation in the wake of the Watergate scandal. Rockefeller served as Vice President of the United States under President Gerald Ford, who was the first Vice President to be appointed under the provisions of the 25th Amendment, and he ascended to the presidency following the August 1974 resignation of Richard Nixon over the Watergate Scandal. Rockefeller accepted Ford's invitation to be his Vice President. Rockefeller decided not to join the 1976 Republican national ticket with Ford following opposition to his selection by Goldwater and other conservatives in the party. He retired from politics in 1977. Rockefeller died on January 26, 1979, at age 70 from a heart attack.
Collapse