On March 16, 1751 (269 years ago today) James Madison, Jr., the fourth President of the United States, was born at Belle Grove Plantation near Port Conway, Virginia. He was actually born on March 5th, but at the time the colonies were using the Old Style, Julian calendar, and smarter minds than mine tell me that this converts to March 16th on the modern day Gregorian calendar. 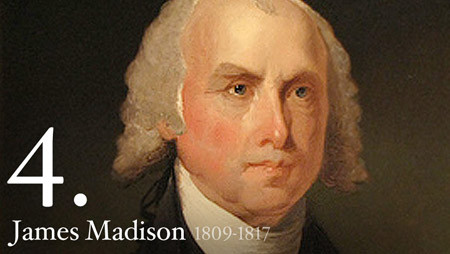 After the constitution had been drafted, Madison became one of the leaders in the movement to ratify it. He collaborated with Alexander Hamilton and John Jay to produce the Federalist Papers in 1788, and they are still relied on as a tool for construction of the Constitution today. He was also a delegate to the Virginia constitutional ratifying convention, and was the key player in the successful ratification in Virginia.

Madison changed his political views during his life. During the drafting and ratification of the constitution, he favored a strong national government, though later he grew to favor stronger state governments. Still later in life he settled somewhere between the two extremes.

In 1789, Madison became a leader in the new House of Representatives. He showed skill as the draftsman of many laws and he is notable for drafting the first ten amendments to the Constitution. Madison worked closely with President George Washington to organize the new federal government. In 1791 he broke with Alexander Hamilton and the faction that became the Federalist Party, when Madison and Thomas Jefferson organized what they called the Republican Party (later renamed the Democratic-Republican Party).

Madison served as Thomas Jefferson's Secretary of State from 1801 to 1809, during which time he supervised the Louisiana Purchase, which doubled the nation's size. He was elected to succeed Jefferson as President in 1809 and he presided over renewed prosperity for several years. After the failure of diplomatic protests and a trade embargo against Great Britain, he led the nation into the War of 1812 in response to British encroachments on American honor and rights. He also hoped to end the influence of the British with a number of Indian tribes whose resistance blocked United States settlement in the Great Lakes region. Madison found the war to be very difficult, because as the United States had neither a strong army nor support in all regions for war with England. As a result, he supported a stronger national government and a strong military, as well as the national bank, which he had previously opposed.

Like other Virginia politicians of his time, Madison was a slaveholder who inherited his plantation known as Montpelier, and owned hundreds of slaves during his lifetime. On his plantation tobacco and other crops were grown. Madison supported the compromise that allowed three-fifths of the enumerated population of slaves to be counted for representation.

When Madison left office in 1817, he retired to Montpelier. He was 65 years old. Dolley was 49. Madison left the presidency a poorer man than when he entered. Some historians believe that Madison's financial problems was the reason why he refused to allow his notes on the Constitutional Convention, or its official records to be published in his lifetime. Instead he wanted them to bring money to his estate for Dolley's use. In his later years, Madison became extremely concerned about his historic legacy. He took to modifying letters and other documents in his possession: changing days and dates, adding and deleting words and editing sentences. 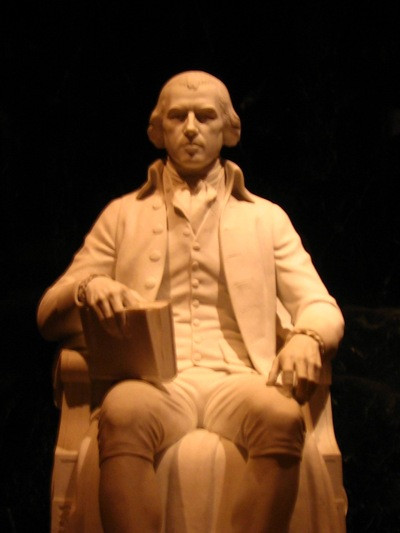 Between 1834 and 1835, Madison sold 25% of his slaves to make up for financial losses on his plantation. He died at Montpelier on June 28, 1836 at the age of 85 and was buried in the Madison Family Cemetery at Montpelier.

Madison has recently been the subject of a number of thorough biographies, including Madison's Gift: Five Partnerships That Built America by David O. Stewart, 2014's James Madison: A Life Reconsidered by Lynne Cheney, reviewed here and The Three Lives of James Madison: Genius, Partisan, Patriot by Noah Feldman.

When popular General Dwight D. Eisenhower was nominated for president by the Republican Party in 1952, he had no strong preference for a vice presidential candidate. Republican party leaders met with Ike and recommended Nixon. The reasons for Nixon's selection were his youth (he was then 39), his stance against communism (in a time of McCarthyism), and his political base in California—one of the largest states. Other candidates considered at the time were Ohio Senator Robert A. Taft, New Jersey Governor Alfred Driscoll and Illinois Senator Everett Dirksen. On the campaign trail, Eisenhower spoke about his plans for the country, leaving any negative campaigning for his running mate. 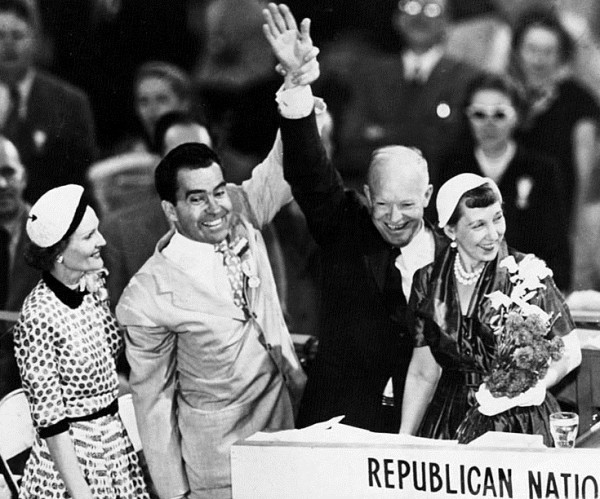 Nixon almost never got his chance to be on the Republican ticket that year. The media reported that Nixon had a political fund, maintained by his backers, which reimbursed him for political expenses. While not illegal, this accusation exposed Nixon to allegations of possible conflict of interest. Pressure mounted for Eisenhower to dump Nixon from the ticket. Nixon came up with a clever damage control scheme. He went on television to deliver an address to the nation on September 23, 1952, which became known as the Checkers speech, (a reference to a dog named Checkers that the Nixons had received as a gift.) The address was heard by about 60 million Americans, the largest television audience up to that point. Nixon emotionally defended himself, stating that the fund was not secret, nor had donors received special favors. He described himself as a man of modest means. He said that his wife did not have a mink coat. She wore a "respectable Republican cloth coat". He said that there was one gift that he had received, but which he would not give back: "a little cocker spaniel dog sent all the way from Texas. And our little girl—Tricia, the 6-year-old—named it Checkers." The speech resulted in a huge public outpouring of support for Nixon, and Eisenhower was left with no choice but to keep Nixon on the ticket, though some have speculated that this planted the seeds of resentment by the president towards his running mate

Eisenhower gave Nixon responsibilities during his term as vice president—more than any previous vice president. Nixon attended Cabinet and National Security Council meetings and chaired them when Eisenhower was absent. He went on a 1953 tour of the Far East, and later to South America, the latter at personal risk when a mob of protesters attacked the car that Nixon was riding in.

Despite intense campaigning by Nixon, Republicans lost control of both houses of Congress in the 1954 elections. Nixon took these losses personally and considered leaving politics once he had served out his term. But on September 24, 1955, President Eisenhower suffered a heart attack. At first his condition was believed to be life-threatening. Eisenhower was unable to perform his duties for six weeks. The 25th Amendment to the United States Constitution had not yet been proposed. Although Nixon had no formal power to act, he stood in for the President, presiding over Cabinet meetings and making sure that there were no power struggles in Cabinet.

His spirits buoyed, Nixon sought a second term, despite the fact that some of Eisenhower's aides aimed to displace him. In a December 1955 meeting, Eisenhower proposed that Nixon not run for reelection in order to give him administrative experience before a 1960 presidential run and instead become a member of Eisenhower's Cabinet. Nixon believed such an action would destroy his political career. When Eisenhower announced his reelection bid in February 1956, he was coy on the question of whether Nixon would be his running mate. Although no Republican was opposing Eisenhower, Nixon received a substantial number of write-in votes against the President in the 1956 New Hampshire primary election. In late April, the President announced that Nixon would again be his running mate and the ticket was reelected by a comfortable margin in the November 1956 election.

In early 1957, Nixon undertook another major foreign trip, this time to Africa. On his return, he helped guide the Civil Rights Act of 1957 through Congress. The bill was a weakened one and civil rights leaders were divided over whether Eisenhower should sign it. Nixon advised the President to sign the bill. Eisenhower suffered a mild stroke in November 1957, and Nixon gave a press conference, assuring the nation that the Cabinet was functioning well during Eisenhower's absence.

In July 1959 President Eisenhower sent Nixon to the Soviet Union for the opening of the American National Exhibition in Moscow. On July 24, Nixon was touring the exhibits with Soviet Premier Nikita Khrushchev when the two stopped at a model of an American kitchen and engaged in an impromptu exchange about the merits of capitalism versus communism that became known as the "Kitchen Debate".

Nixon was expected to face a serious challenge for the Republican nomination from New York Governor Nelson Rockefeller, the leader of the Republican moderate wing. But Rockefeller announced that he would not be a candidate for president after he completed a national tour which led him to believe that Nixon was too strong of a candidate. After Rockefeller's withdrawal, Nixon faced no significant opposition for the nomination. The Republican Party held primaries in 14 states that year and Nixon won all, except for those in which local "favorite son" candidates (West Virginia and South Dakota) and in New Jersey, which left its delegates unpledged.

At the 1960 Republican National Convention in Chicago, Nixon was the overwhelming choice of the delegates. He received 1,321 votes. His closest rival was conservative Senator Barry Goldwater of Arizona who received only 10 votes. Nixon chose former Massachusetts Senator and United Nations Ambassador Henry Cabot Lodge Jr., as his vice-presidential candidate. It was at this convention Nixon promised to campaign in every state during his campaign.

Nixon's Democratic opponent was his contemporary, Massachusetts Senator John F. Kennedy. The race remained close as Nixon campaigned on his experience, while Kennedy called for new blood and claimed the Eisenhower–Nixon administration had allowed the Soviet Union to overtake the U.S. in ballistic missiles resulting in a "missile gap". The statement was untrue, but in politics, perception is reality. In the campaign a new political medium was introduced in the campaign: televised presidential debates. In the first of four such debates Nixon appeared pale, with a five o'clock shadow, while Kennedy came across as young and refreshed. His campaign was more attuned to how best to present their candidate on black and white television. Although this claim is disputed by others, some of Nixon's biographers have claimed that his performance in the debate was not well-received in the visual medium of television, but that many people listening on the radio thought Nixon was the better speaker.

At the Republican Convention, Nixon had pledged to campaign in all 50 states. In August, Nixon injured his knee on a car door while campaigning in North Carolina. The knee became infected and Nixon had to cease campaigning for two weeks. When he left Walter Reed Hospital, Nixon refused to abandon his pledge to visit every state and he spent time visiting states that he had no chance of winning, or that had few electoral votes. Nixon spent the last weekend before the election campaigning in Alaska, which had only three electoral votes, while Kennedy campaigned in large states such as New Jersey, Ohio, Michigan, and Pennsylvania. 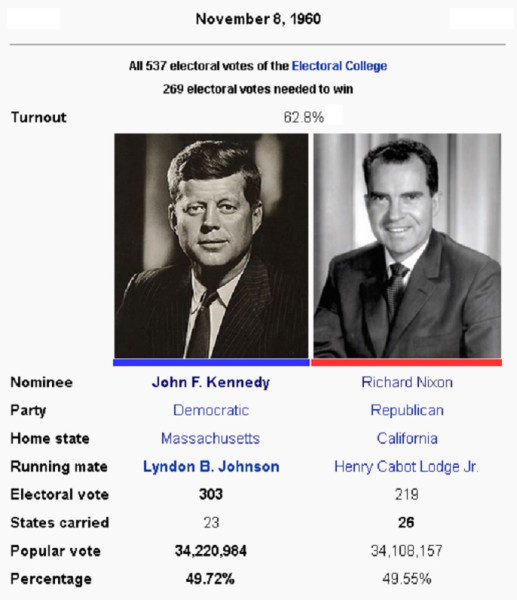 On election day Nixon narrowly lost the election. Kennedy won the popular vote by only 112,827 votes (0.2 percent). There were charges of voter fraud in Texas and Illinois, both states won by Kennedy. Although he was privately bitter as a result of the belief that the election had been stolen from him, Nixon refused to consider contesting the election.
Collapse