So far only one person who has held the office of Speaker of the House of Representatives has been elected President of the United States, namely James K. Polk. Two others have finished second in the race for President (Henry Clay and James G. Blaine). James Beauchamp "Champ" Clark served as Speaker of the House from 1911 to 1919, and at one time, he was his party's presumptive nominee as their presidential candidate. But as John Lennon would later write, life is what happens to us when we're busy making other plans. 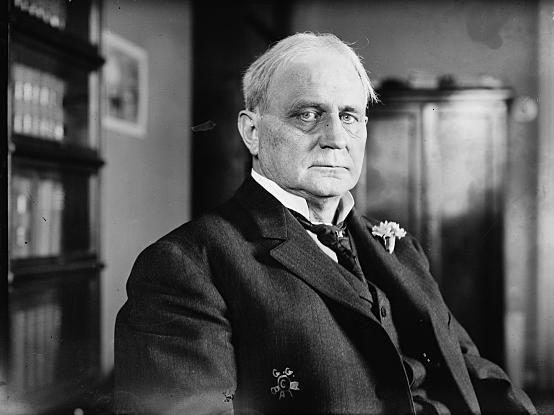 Clark was born on March 7, 1850 in Lawrenceburg, Kentucky. His father was John Hampton Clark and his mother was Aletha Beauchamp. His first cousin twice on his mother's side was Jereboam Beauchamp, a famous lawyer and member of the Kentucky House of Representatives, who murdered a political opponent who had accused him of fathering a child out of wedlock with an African-American woman. Champ Clark graduated from Bethany College in West Virginia and then attended and graduated from Cincinnati Law School. In 1875 he moved to Missouri in 1875 where he opened a law practice the following year. He served as principal at Marshall College (now Marshall University) from 1873 to 1874.

Law was a springboard to politics for Clark and in 1892 he was elected to the United States House of Representatives as a Democrat. He lost his bid for reelection in 1894, but regained the seat in 1896, and remained in the House until his death, the day before he was to leave office. Clark married Genevieve Bennett Clark on December 14, 1881. Together, they had two children, Joel Bennett Clark (known as Bennett) and Genevieve Clark Thomson. Bennett served as a United States Senator from Missouri from 1933 to 1945. Genevieve was a suffragette and an unsuccessful candidate for the House of Representatives for Louisiana.

Clark rose in his party's ranks and in 1903 he ran for House Minority Leader, but was defeated by John Sharp Williams of Mississippi. When Williams ran for the Senate in 1908, Clark ran once again for the position of Minority Leader and this time he won. When the Democrats won control of the House in the 1910 mid-term elections, Clark became Speaker of the House when the new session opened.

As speaker, in 1911, Clark give a famous speech that helped to decide the general election in Canada. Canada and the United States had signed the Canadian–American Reciprocity Treaty and in the Canadian general election of 1911, Canadian Conservative candidate Robert Borden was campaigning on how the treaty would lead to the take over of Canada by the Americans. Borden's campaign received a boost when, on the floor of the House, Clark argued in favor of the treaty, and stated, "I look forward to the time when the American flag will fly over every square foot of British North America up to the North Pole. The people of Canada are of our blood and language." Clark went on to state that reciprocity agreement was the first step towards the end of Canada. His speech that was received with "prolonged applause" according to the Congressional Record. The Washington Post said of the speech, "Evidently, then, the Democrats generally approved of Mr. Clark's annexation sentiments and voted for the reciprocity bill because, among other things, it improves the prospect of annexation." The Conservative Party of Canada, which opposed the treaty, won the Canadian election. Clark's speech was credited with inciting fears in Canada of an American takeover, giving momentum to Borden's campaign.

Clark was one of the most popular leaders within his party and in 1912, Clark was seen as the front-runner for the Democratic presidential nomination, coming into the convention. His strengths were seen as his abilities as an orator and as someone who was able to keep the diverse factions in the party united. His critics described him as a "time server" who had never sponsored any important legislation. His main opponent was an upstart academic named Woodrow Wilson.

Wilson had become a prominent 1912 presidential candidate immediately after his election as Governor of New Jersey in 1910. His reputation was enhanced because of his clashes with state party bosses. Those in the party's rising Progressive movement were impressed by this. Wilson also enjoyed the support of party intellectuals because of his Princeton pedigree, as well as among southerners who believed as a transplanted Southerner, Wilson had their interests at heart. In July 1911, Wilson brought in his future son-in-law William Gibbs McAdoo and "Colonel" Edward M. House to manage his campaign. Prior to the convention, Wilson had also made appeals for the support of three-time Democratic presidential nominee William Jennings Bryan, who had a huge influence in the Democratic Party since the 1896 presidential election.

Initially Clark had the support of the Bryan wing of the party. Alabama Senator Oscar Underwood was supported by conservative southerners. In the 1912 the Democratic Party had held presidential primaries in 12 states. Clark won primaries in Illinois, Nebraska (Bryan's home state), Massachusetts, Maryland and California. But Wilson was victorious in Wisconsin, Pennsylvania, Oregon, South Dakota and his home state of New Jersey.

The Democratic Convention was held in Baltimore, Maryland, from June 25 to July 2 of 1912. Initially, Clark received the largest number of delegate votes early in the balloting. He led on the first 29 ballots, receiving between between 440 and 556 votes. But at the time, the rules required that a candidate needed a two-thirds majority to win the nomination. Clark could never get over that hump. His chances were hurt when Tammany Hall, the powerful and corrupt Democratic political machine in New York City, threw its support behind him. Instead of helping Clark, this led William Jennings Bryan, the three-time Democratic presidential candidate and the leader of the party's liberals, to turn against Clark, considering him to be the candidate of "Wall Street".

Bryan instead threw his support to Wilson, who had consistently finished second to Clark on each ballot, and who was considered to be a moderate reformer. Before Bryan's change of heart, Wilson had nearly given up hope of receiving the nomination, and was composing a concession speech to be read for him at the convention that would free his delegates to vote for someone else. Bryan's defection from Clark to Wilson led many other delegates to do the same, and Wilson gradually gained strength while Clark's support dwindled. Wilson finally received the nomination on the 46th ballot. Clark's memoirs describe his bid for the presidency on 1912 as the central event if his career.

Wilson went on to win the election of 1912 handily because of a split in the Republican Party between William Howard Taft and Theodore Roosevelt. Despite losing the nomination to Wilson, Clark initially turned out to be the President's ally in Congress, helping to pass much of Wilson's legislative agenda. Clark was known for maintaining party unity. But this changed in 1917 when Clark opposed Wilson's decision to bring the United States into World War I. Clark also opposed the Federal Reserve Act, because he believed that it concentrated too much financial power in the hands of eastern banks. 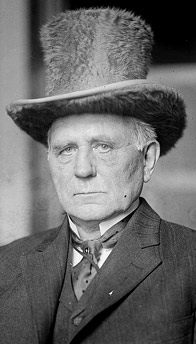 Divisions in the Democratic Party led to the party's defeat in 1920 to Warren Harding. Clark himself was defeated in the Republican landslide of 1920. He died from pneumonia on March 4, 1920 at his home in Washington, DC., just five days before his seventy-first birthday.
Collapse