There were no such things as primaries in 1844, but there was still a race for who the Democrats would run for President in 1844. The candidates ran in the press. They wrote letters to political friends that were intended to be published in the papers. Sometimes they said dumb things in them and they got burned by them. Think of them as very slow tweets. The first chorus of the song "James K. Polk" by the band They Might Be Giants describes the race, though not with perfect accuracy, but close. It goes like this:

"In 1844 the Democrats were split
The three nominees for the Democratic candidate
Were Martin Van Buren, a former President and an abolitionist
James Buchanan, a moderate
Lewis Cass, a general and expansionist
From Nashville came a Dark Horse riding out
He was James K. Polk, Napoleon of the Stump!" 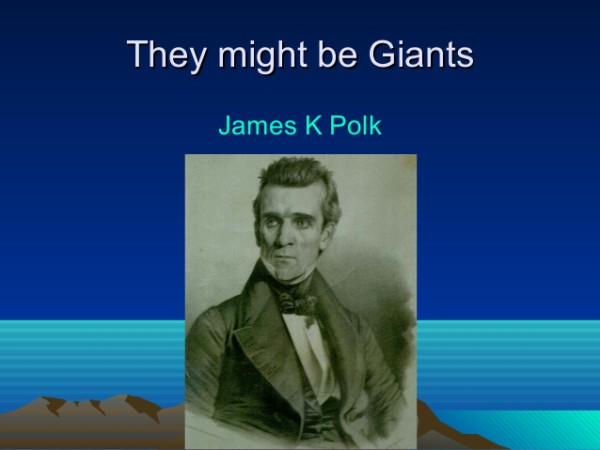 That verse tells a lot of the story really. The upcoming election of 1844 occurred at a time when slavery and expansionism (and whether slavery would be permitted in any new territory) were the issues du jour. Slavery was the hot button issue, with the fight between abolitionists and those who wanted the territories to permit slavery heating up in congress and elsewhere in the nation. A congressional "Gag Rule" had been passed attempting to censor any discussion of abolition of slavery in Congress. The issue transcended party lines and both the Whigs and the Democrats had members of their parties on both sides of the debate.

The issue attracted some urgency because of the question of whether or not Texas would be annexed into the union and if so, whether as land on which slavery would be allowed or prohibited. In 1836, a portion of the Mexican state of Coahuila y Tejas declared its independence to form the Republic of Texas. The Texans were mostly white immigrants from the Deep South, many of whom owned slaves. They sought to bring their republic into the Union as a state. At first, Presidents Andrew Jackson and Martin Van Buren declined to pursue annexation because the prospect of bringing another slave state into the Union was very problematic. Both major parties saw the prospect of Texas statehood as not being worth the prospect of potential war with Mexico.

The incumbent President John Tyler, formerly the vice-president, had assumed the presidency upon the death of William Henry Harrison in 1841. Tyler was a Whig in name only, who had left the Democratic Party earlier in his career because he disagreed with many of the policies of Andrew Jackson. Tyler was committed to the expansion of slavery. After he vetoed the Whig domestic legislative agenda, he was expelled from his own party on September 13, 1841. He was a man without a party, but he was also unencumbered by party restraints. Tyler saw Texas annexation as an issue which might lead to his election to a full term in 1844. To gain support for his position, he argued that Great Britain had its eyes on Texas and that was something not in the interests of Americans or of slave-holders. He directed Secretary of State Abel P. Upshur of Virginia to pursue secret annexation discussions with the Texans.

A treaty of annexation was negotiated and Tyler submitted his Texas-US treaty to the Senate on April 22, 1844, where a two-thirds majority was required for ratification. Newly-appointed Secretary of State John C. Calhoun of South Carolina (who began serving in this position on March 29, 1844) argued that the acquisition of Texas was necessary to safeguard the institution of slavery. Anti-slavery Whigs considered Texas annexation morally wrong, especially since Mexico had outlawed slavery in Coahuila y Tejas in 1829, before Texas independence had been declared. It was against this backdrop that the 1844 presidential campaign unfolded with Texas annexation being the number one issue. All of the candidates were expected to declare a position on this contentious issue.

As the song suggests, Martin Van Buren, who was President from 1837 to 1841, was the presumptive Democratic presidential contender in the spring of 1844. Up to that time he had the support of his mentor and predecessor Old Hickory, Andrew Jackson. This changed with the Tyler treaty. The issue was a hot potato that Van Buren did not want to handle, as he realized that supporting slavery expansionists in the South would alienate the support of Northern Democrats. In a letter known as the "Hammett Letter", written on April 20 and published April 27, 1844, he advised his party to reject Texas annexation until the American public had been consulted on the matter and Mexico's cooperation had been obtained to avoid an unnecessary war. This was only slightly different from the position of Whig candidate Henry Clay, who would never agree to Texas annexation without Mexico's assent.

Van Buren's supporters believed that, since their candidate's position was slightly better than that of Clay, he would be the only choice for southern pro-annexationists. This turned out not to be the case. Southern Democrat support for Buren eroded over the issue. Ex-President Andrew Jackson publicly announced his support for immediate Texas annexation in May 1844. As the Senate debated the Tyler treaty, Jackson warned that any delay would result in a British dominated Texas Republic that would promote emancipation and pose a foreign military threat to the southwest United States. Jackson turned against his former vice-president and urged Democrats not to support Van Buren and to seek a Democratic presidential candidate fully committed to the immediate annexation of Texas.

The Democratic Party met in Baltimore on May 27, 1844 to select its candidate for President. Van Buren was still the leading candidate,but his position on Texas cost him the support of southern and expansionist Democrats. He led the balloting on the first five ballots, with Lewis Cass of Michigan placing second. Cass overtook Van Buren on the next three ballots, but the party realized that it was deadlocked, and no candidate appeared to be nearing the necessary threshold of 2/3 of the voting delegates. James Buchanan was never as much of a possibility as They Might Be Giants suggest, and he was more of a southern sympathizer than a moderate, although that was probably considered moderate for the times. For most of the ballots former Vice-President Richard Johnson placed third. On the eighth ballot, historian George Bancroft, a delegate from Massachusetts, proposed former House Speaker James K. Polk as a compromise candidate. Polk had served as Governor of Tennessee, but had lost his bid for re-election and many believed that his political career was dead.

Polk came to the convention in hopes of becoming the vice presidential nominee. He had the backing of Andrew Jackson. When Polk was offered to the convention as an acceptable alternative for all Democratic factions at odds over the Texas annexation crisis, he presented as an acceptable compromise. Despite his fervent advocacy for annexation, he had remained loyal to Van Buren throughout the Texas controversy, so Van Buren supporters were willing to accept Polk, with some reservations. Southern Democrats liked Polk's pro-annexation stance. On the ninth ballot, Van Buren instructed his delegates to support Polk, beginning a stampede to Polk that ended with him winning the nomination unanimously.

The delegates selected Senator Silas Wright of New York for Vice President, but Wright, an admirer of Van Buren, declined the nomination. The Democrats then nominated George M. Dallas, a Pennsylvania lawyer.

The election was a heated contest. In the South, Democrats labelled Clay as a "dark skin-loving abolitionist", while in the North, they defamed him, portraying him as a dueling, gambling, womanizing, irreligious hypocrite whose reversal on the bank issue proved he had no principles.

The Tyler-Texas annexation treaty, submitted to the Senate in April 1844, was been defeated in the Whig controlled Senate on June 8, 1844, by a vote. largely along partisan lines, of 16 to 35 against passage. Whigs voted 27-1 against the treaty, while Democrats voted for the treaty 15-8. After the Senate defeat of the treaty, Tyler believed that his only hope of success in influencing passage of his treaty was to run as candidate in the 1844 election. His "Democratic-Republican Party", a recycling of the name of Thomas Jefferson's party, held its convention on May 27, 1844, in Baltimore, Maryland, a short distance from the unfolding Democratic Party convention that would select Polk as nominee. Tyler was nominated the same day without challenge, accepting the honor on May 30, 1844. He designated no vice-presidential running mate.

Polk was concerned that a Tyler ticket might siphon votes away from the Democrats and provide Clay with the margin of victory in a close race. Polk enlisted Andrew Jackson to reassure Tyler that Texas annexation would occur under a Polk administration. On August 20, 1844, Tyler dropped out of the presidential race, and his supporters switched their support to Polk.

Former senator Henry Clay of Kentucky had been selected as the Whig presidential nominee at the party's convention in Baltimore, Maryland, on May 1, 1844. He inherited a divided party, split over the issue of annexation and expansionism of slavery. Two weeks before the Whig convention in Baltimore, Clay issued a document known as the Raleigh Letter (issued April 17, 1844) in which he denounced the Tyler annexation bill and predicted that its passage would provoke a war with Mexico. Clay said that even with Mexico's consent, he would block annexation in the event that substantial sectional opposition existed anywhere in the United States.

On July 27, 1844, Clay, in the midst of the campaign, released another statement, called the "Alabama Letter", in which he qualified his stance on Texas annexation, declaring "no personal objection to the annexation" of Texas. Northern Whigs expressed outrage and accused him of equivocating on Texas annexation.

The abolitionist lawyer and publisher James Birney ran as the candidate of the anti-slavery Liberty Party. Although the party would only garner 2.3% of the popular vote overall, it received a sufficient number of votes in a number of close states such as in New York, which Polk narrowly won in the election. Joseph Smith, the mayor of Nauvoo, Illinois, and founder of the Latter Day Saint movement, ran as an independent. His campaign ended when he was attacked and killed by a mob while in the Carthage, Illinois jail on June 27, 1844. 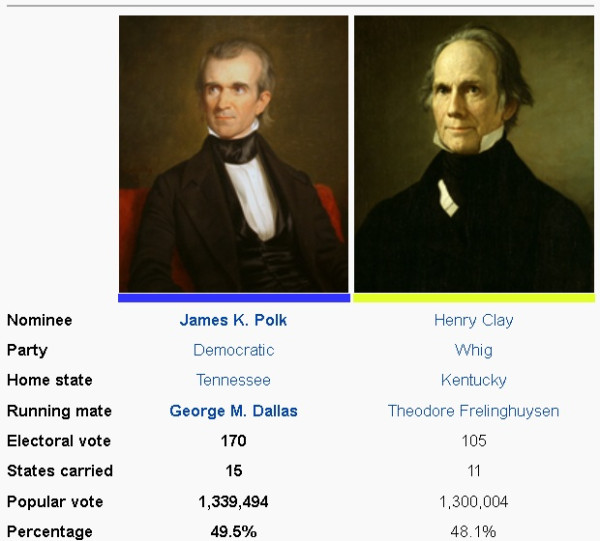 On election day Democrats enjoyed a huge upsurge in voter turnout, up to 20% over the figures from 1840, especially in the Northwest and Mid-Atlantic regions. The Whigs showed only a 4% increase. They won a number of north western states such as Michigan, Illinois and Indiana. In the Deep South, Clay lost every state to Polk. Clay's "waffling" on Texas may have cost him the 41 electoral votes of New York and Michigan. James Birney of the Liberty Party received 15,812 and 3,632 votes respectively in those states, on the basis of his unwavering stand against Texas annexation. Polk won by a mere 5,106 out of 470,062 cast in New York, and only 3,422 out of 52,096 votes in Michigan. Had enough of these voting blocks cast their ballots for the anti-annexationist Clay in either state, he would have defeated Polk. James K. Polk received 1,339,494 votes (49.5%) and 170 electoral votes, compared to 1,300,004 (48.1%) for Clay, who won 105 electoral votes. Birney received 62,103 votes (2.3%) but no electoral votes.

Some great books about this election are:

2. Polk: The Man Who Transformed the Presidency and America by Walter R. Borneman

3. A Country of Vast Designs: James K. Polk, the Mexican War and the Conquest of the American Continent by Robert W. Merry
Collapse