In 1904 Theodore Roosevelt was completing the term as president that William McKinley had been elected to in 1900 and that Roosevelt was called upon to complete following McKinley's assassination in September of 1901. Roosevelt was a popular president and he had earned the support of his party, despite the reticence than many in the party had about Roosevelt prior to 1900. There were some in the party who wanted to dump Roosevelt as their candidate in 1904, but they were in the minority and Roosevelt unanimously won his party's nomination for president at the party convention in Chicago in June of 1904. 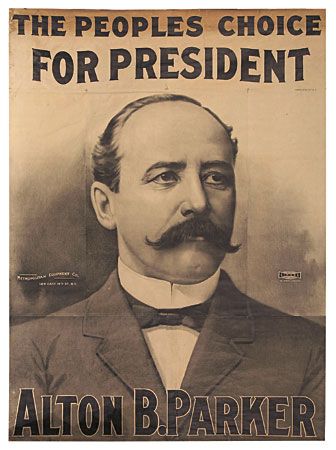 For the Democratic Party, there was no presumptive nominee, but the party would surprise many by securing a candidate on the first ballot of its convention. In the past five elections, two men had been the Democratic Party candidates for president, but in 1904, both of these men, William Jennings Bryan and former President Grover Cleveland, declined to run for president. Cleveland was 67 years old and his health had been declining. After losing two successive presidential elections, Bryan was still well-respected within the party, but was not seen as a winner. Neither of the two Democratic nominees of the past 20 years wanted the presidential nomination, and the party looked to a new candidate.

New York was seen as an important state politically. Its governor's mansion had produced two of the past three presidents (Cleveland and Roosevelt) and the party looked to another prominent New York Democrat, Alton B. Parker. Parker was the Chief Judge of the New York Court of Appeals and was respected by both Democrats and Republicans in his state. He was so respected that on several occasions the Republicans chose not to run anyone against him when he ran for various political positions. Parker refused to work actively for the nomination, but did nothing to restrain his conservative supporters. Former President Grover Cleveland endorsed Parker.

The Democratic Convention that met in St. Louis, Missouri, on July 6–9, 1904. Although Parker had not been active in politics for two decades, and not not made any enemies, the convention was still a contentious one because of the split within the Democratic party between liberals and conservatives. William Jennings Bryan still had considerable influence within the party, especially in the west and in the south. Despite the fact that Parker had supported Bryan in 1896 and 1900, Bryan did not return the favor. Bryan disliked the fact that Parker was a Gold Democrat. Bryan called Parker a "tool of Wall Street" and told his supporters that no self-respecting Democrat could vote for Parker.

Publisher William Randolph Hearst was now a Congressman from New York. Hearst owned eight newspapers, all of them friendly to labor and to the liberal wing of the Democratic Party. Hearst portrayed himself as the champion of the common man. He supported trust-busting activities, and claimed to champion the cause of "the people who worked for a living." Hearst had the support of the Illinois delegation as well as several other states. Hearst's newspapers had supported William Jennings Bryan and Bimetallism in 1896, but on this occasion Bryan did not reciprocate that support. Instead, Bryan seconded the nomination of Francis Cockrell, a Senator from Missouri.

The prospect of having Hearst for a candidate united conservative Democrats behind Parker. They managed to get him nominated on the first ballot. Parker received 658 votes on the first roll call, 9 short of the necessary two-thirds. Hearst was second with 200 votes and Cockerell finished third with 42, followed by a ten other candidates with a smattering of votes. But before the result could be announced, 21 more votes changed hands and were transferred to Parker. As a result, Parker won the nomination on the first ballot with 679 votes to 181 for Hearst.

After Parker's nomination, Bryan bitterly accused the trusts and other moneyed interests within the party of secured the nomination by what Bryan called "crooked and indefensible methods." Bryan also said that labor had been betrayed in the convention and could look for nothing from the Democratic Party. Bryan pointed out that Parker was one of the judges on the New York Court of Appeals who declared the eight-hour law unconstitutional.

When Parker learned that the Democratic platform pointedly omitted reference to the currency issue, he informed the convention by letter that he supported the gold standard. The letter read, "I regard the gold standard as firmly and irrevocably established and shall act accordingly if the action of the convention today shall be ratified by the people. As the platform is silent on the subject, my view should be made known to the convention, and if it is proved to be unsatisfactory to the majority, I request you to decline the nomination for me at once, so that another may be nominated before adjournment." The delegates declined the offer.

Former Senator Henry G. Davis of West Virginia was nominated for vice-president. At age 80, he was the oldest major-party candidate ever nominated for national office. Davis had received the nomination because it was believed he could deliver his state for the Democrats. Davis was also very wealthy. He was a millionaire mine owner, railroad magnate, and banker and many hoped that he would spend some of this money on the Democratic Party campaign. Those who hoped for this were badly disappointed.

The Democratic platform called for reduction in government spending and a congressional investigation of the executive departments that were believed to be be rife with corruption. It also condemned monopolies and it pledged an end to government contracts with companies violating antitrust laws. It called for independence for the Philippines and opposed the protective tariff. It favored strict enforcement of the eight-hour work day and for construction of a Panama Canal as well as for the direct election of senators. It condemned the Roosevelt administration in general. 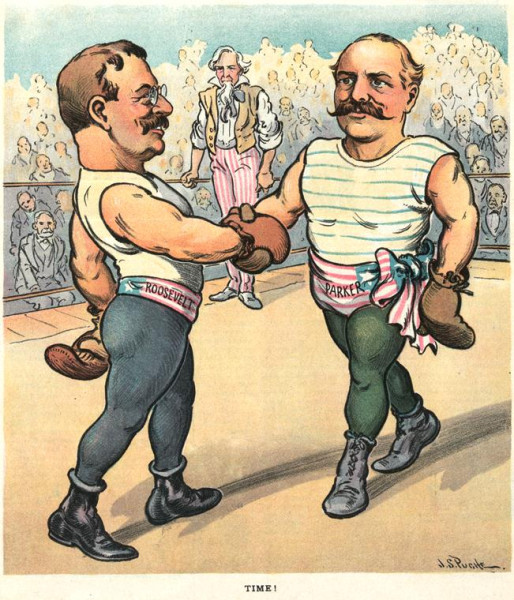 The campaign was much less vigorous than it had been in 1896 and 1900. Parker and Roosevelt were very similar in political outlook and few differences could be noted between their positions. Both men were for the gold standard, both believed in eventual liberation of the Phillipines, both believed that labor unions had the same rights as individuals before the courts. It was ironic that some in the Democratic Party denounced Parker as too conservative and some in the Republican Party denounced Theodore Roosevelt as not conservative enough.

During the campaign, Joseph Pulitzer's New York World carried a full page story about alleged corruption in the Bureau of Corporations. He criticized Roosevelt for appointing George B. Cortelyou as his campaign manager. Cortelyou was Roosevelt's former Secretary of Commerce and Labor and used his position to extract large contributions from them. In 1907, it was disclosed the insurance companies had contributed very heavily to the Roosevelt campaign. But also Parker received financial support from the Morgan banking interests.