In 1932 Franklin Delano Roosevelt clobbered Herbert Hoover in the Presidential election. He won the popular vote 57.4 to 39.7 and he won the electoral vote by a score of 472 to 59. Americans were in the throes of the Great Depression. Rightly or wrongly, they blamed Hoover for it and so they election FDR. Four years later, the Depression wasn't over, and in fact it was in its eighth year. In the interim, Roosevelt's New Deal policies that he had enacted, such as Social Security and unemployment benefits, had proven to be highly popular with most Americans. The odds for unseating the popular FDR did not look good, and yet two Republicans decided that they would try to do so. 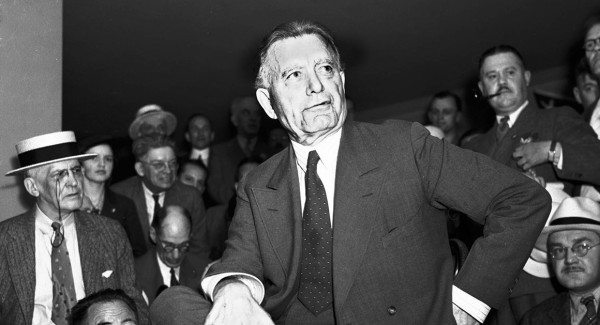 The two were Senator William Borah of Idaho, and Governor Alf Landon of Kansas. In 1936 twelve states held primaries between March 10th and May 19th. Borah was 70 years old and had been a longtime progressive Republican Senator. He had supported Theodore Roosevelt's third party campaign in 1912 and was rumored to be involved in an extramarital affair with TR's daughter Alice Roosevelt Longworth, wife of Congressman Nicholas Longworth. One of Longworth's biographers has asserted that Borah was the father of Alice's daughter Paulina.

Borah ran for the Republican nomination for president in 1936, making him the first candidate from Idaho to do so. His candidacy was opposed by the conservative Republican leadership. Borah realized that Roosevelt was popular, and he went so far as to comment the President for some of his policies, many of which were criticized the Republican Party. At the time there were only 25 Republicans left in the Senate, and Borah believed that this was his opportunity to rebrand the Republican Party as a progressive party, something he had wanted throughout his career.

Borah had shown what in hindsight is certainly questionable judgement. After Hitler took control in Germany in 1933, Borah agreed with Hitler's repudiation of the war guilt and other clauses of the Versailles treaty. He also agreed with many of Hitler's social and economic programs. As time progressed however, Borah was disgusted by the Nazi treatment of the Jews, although he did not speak out against Nazi Germany, even he was urged to do so. He said that in his opinion each nation had the right to run its own affairs. Borah opposed large-scale immigration by Jews from Germany, arguing that this was impractical with millions of Americans unemployed.

According to a United Press reporter's article of Zpril 22, "Borah travels strictly alone, in contrast to the entourages which usually accompany an aspirant to the highest office in the land. He was a multimillionaire and paid his own campaign expenses. The reporter went on to not, "His meals are simple. He likes to break crackers into a glass of milk, to eat an apple with his luncheon. He is fond of shredded cabbage." When asked by influential newspaper reporter William Allen White about what the Republican platform would be, Borah replied that a platform was useless unless you knew who was going to be standing on it.

The Republican party establishment was opposed to Borah's candidacy. In the 12 primaries, the party put up a number of "favorite son" candidates to run against Borah. The only candidate, other than Borah, to run in multiple primaries was Kansas Governor Alf Landon. Like Borah, Landon had also supported Theodore Roosevelt's Progressive Party in 1912. At age 48, he had youth on his side. In an age when Republicans weren't afraid to call themselves liberals, Landon became known as the leader of the liberal Republicans in the state of Kansas. He was elected chairman of the Republican state central committee in 1928 and directed the Republican successful presidential and gubernatorial campaigns in Kansas in that year. Four years later in 1932, Landon was elected Governor of Kansas and was re-elected governor in 1934. He and Frank Merriam of California were the only Republican governors in the nation to be re-elected that year. As governor, Landon gained a reputation for reducing taxes and balancing the budget. He was a fiscal conservative, but he also believed that government had an obligation to deal with social issues. He supported parts of the New Deal and labor unions.

What Landon did not have was the support of former President Herbert Hoover. The two had a falling out during the 1932 election campaign. Osro Cobb of Arkansas, a friend of both men, tried to bring about a reconciliation between the two, but was unable to do so. Landon tried to address the needs of his Depression-battered state and called for a special session of the Legislature to enact measures to bring Kansas under the federal social security program.

Frank Knox, a newspaper editor who would later become Landon's running mate, won the New Hampshire primary, running unopposed. In the first contested primary held on April 7, Borah won an overwhelming victory in Wisconsin with 98% of the vote. Landon answered with a victory in the Illinois primary a week later, edging out Borah with 54% of the vote to 46% for Borah. The same day, Borah won the Nebraska primary with 75% of the vote. Landon answered with a strong victory in the Massachusetts primary on April 28. He would only win one other primary, the final one held on May 19th in New Jersey. In between, Borah was victorious in Pennsylvania, West Virginia and Oregon. Favorite son candidates won in California (Earl Warren), and Ohio (won by Illinois Congressman Stephen Day), while Borah and South Dakota Governor Warren Green tied in that state's primary. 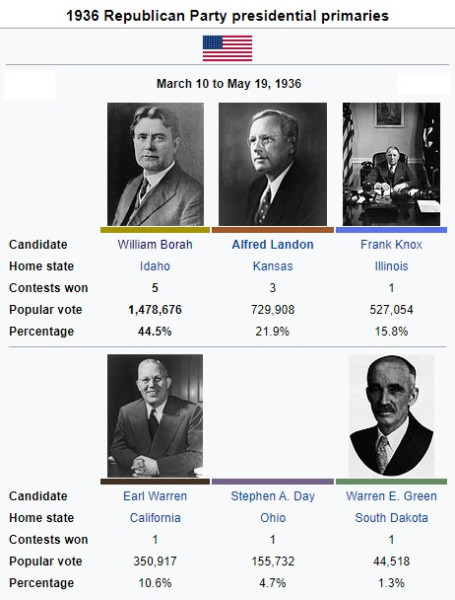 At the start of the convention, Landon looked like the likely nominee. Attempts were made to form a "Stop Landon" coalition by Michigan Senator Arthur Vandenberg, Borah, and Frank Knox. But the convention delegates were not interested. Landon won the nomination on the first ballot. He received 984 votes. Borah only received 19. 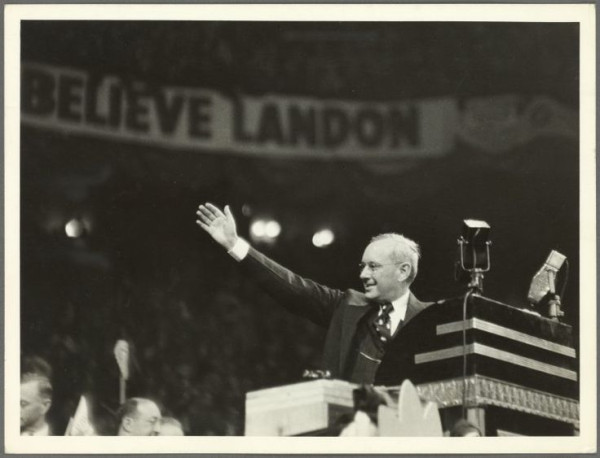 Borah refused to endorse Landon. There was some suggestion that he might cross party lines and support Franklin Delano Roosevelt. But he chose to endorse neither candidate. In the election that fall, Borah ran for a sixth term in the Senate. The Democrats ran Governor Ben Ross as their candidate. Although Idahoans overwhelmingly voted for Roosevelt, Borah hung on to his senate seat with over 60% of the vote. Landon wasn't as lucky in the general election. He lost every state except Maine and Vermont.
Collapse