In the years after the 1912 election when Theodore Roosevelt and William Howard Taft divided the loyalties of the Republican Party between Progressives and Conservatives, some in the party pondered as to the best way to reunite the party and take back the White House from Democratic President Woodrow Wilson. The party would eventually put its chips on Associate Supreme Court Justice Charles Evan Hughes of New York. But there was another candidate who saw himself as the potential saviour of his party. That man was Iowa Senator (and former Governor) Albert Baird Cummins. Cummins had qualities that appealed to both Progressives and Conservatives. In an era when primaries were in their infancy, he won more primaries in 1916 than any other Republican candidate. 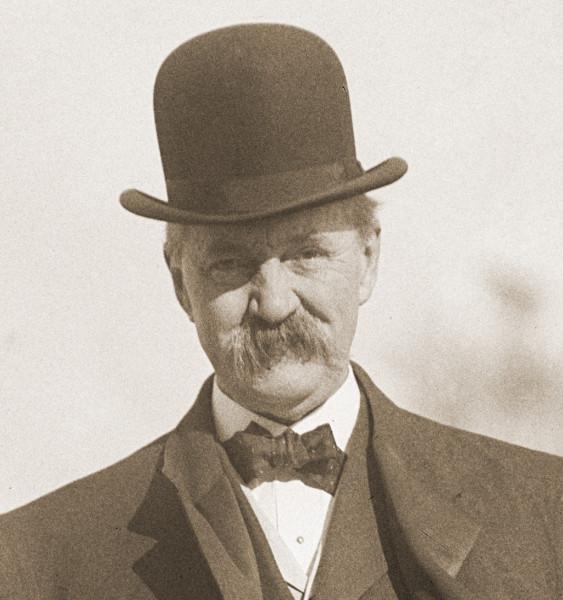 Cummins appeared to have some elements of presidential pedigree in that he was born in a log house in Carmichaels, Pennsylvania, on February 15, 1850. His father Thomas L. Cummins, was a carpenter who also farmed. He completed all of the required classes at Waynesburg College, but did not graduate because of a dispute with the College's president over the issue of Darwinism. After leaving college, he worked as a tutor, as a carpenter and then worked in the Clayton County recorder's office. In 1871, he moved to Allen County, Indiana, where he work as a railway clerk, carpenter, construction engineer, express company manager, and deputy county surveyor.

Cummins moved to Chicago where he studied law while working as a clerk in an lawyer's office. He was admitted to the Illinois bar in 1875 and practiced law in Chicago for three years. Cummins moved to Des Moines, Iowa, where he opened his own law office. He acted for local businessmen, giving him an in with prominent members of Des Moines society. His most famous case was not representing corporate interests, but acting for a group of Iowa farmers from the Grange movement against Washburn & Moen, a barb wire trust. The farmers tried to break an eastern syndicate's monopoly of the production of barbed wire by operating their own factory.

Cummins joined the Republican Party, and he attended every state and national Republican convention between 1880 and 1924. He served as an Iowa state legislator in 1888 to 1890, and was a presidential elector in 1892. He was elected to the Republican National Committee in 1896 to 1900. Cummins supported the Progressive faction of the Iowa's Republican party. He challenged Iowa's Republican establishment, a faction led by Senator William B. Allison. In 1887, Cummins was elected to a term in the Iowa State Senate representing Des Moines. He served as temporary chair of the 1892 State Republican Convention and in 1894 he was unsuccessful in his bid for a seat in the U.S. Senate. In 1896 he actively supported William McKinley's presidential campaign, and was appointed as Iowa's representative on the Republican National Committee.

In an era when US Senators were chosen by the Iowa General Assembly, Cummins was passed over in 1900 in favor of John H. Gear. He challenged Gear, but withdrew when it appeared he lacked the votes to win. After Gear suffered a fatal heart attack in July 1900, Governor Leslie M. Shaw turned down numerous requests to appoint Cummins to the vacancy, and instead appointed Jonathan P. Dolliver. Cummins got even by running for Governor of the state. He served as Governor of Iowa between 1902 and 1908, becoming the first Iowa governor elected to three successive terms. As governor, he led efforts to establish compulsory education, a state department of agriculture, and a system of primary elections. He also created an approach to tariff-setting known as "the Iowa idea." This concept embodied the principle that tariff rates should accurately measure the difference between the cost of production locally and abroad, but not set rates higher than necessary to protect home industries.

In June 1908, Cummins ran in the Republican primary for the U.S. Senate seat held by William B. Allison, who was seeking a record seventh term. Cummins had previously promised not to challenge Allison, and was punished by voters for breaking this promise. He lost by over 12,000 votes. Senator Allison died on August 4, 1908, two months after the primary and before the Iowa General Assembly chose its nominee. In November 1908, a second Republican primary was held, and Cummins won decisively. Two months later, in January 1909, Cummins was appointed by the Iowa General Assembly over Democratic rival Claude R. Porter. He served as U.S. Senator from Iowa for 18 years, from 1908 until his death in 1926. Cummins served as President pro tempore of the U.S. Senate between 1919 and 1925. He also chaired the Senate Judiciary Committee and the U.S. Senate Committee on Interstate Commerce.

In January 1912, Cummins announced his intention to run for the Republican Party's presidential nomination. His candidacy was not seriously considered, as the contest was seen as one between incumbent President Taft, Theodore Roosevelt and Progressive Wisconsin Senator Robert La Follette. But Cummins attracted notice from having been a prominent supporter of the notion of Presidential Primaries. A major goal of the progressives in 1911 was to hold primaries, and to take away the power of party bosses to choose presidential candidates and give that power to the people who supported the party. By July 12, at least six states had passed legislation for delegates to the national convention to be chosen in primaries: North Dakota, Wisconsin, Nebraska, Oregon, New Jersey, and Florida. Progressive Republicans increased their calls for primaries following the off-year election of 1911. On November 11, leading Progressives contacted all Republican state chairmen and asked them to provide for selection of delegates to the upcoming Republican National Convention by primaries. Cummins was a leading proponent of the idea. There was no primary held in Iowa that year, and at the convention Cummins received only 17 votes on the ballot on which William Howard Taft was selected as the Republican Party's candidate for President.

After Theodore Roosevelt's supporters walked out of the convention in 1912, Cummins supported Roosevelt rather than Taft, even though he expressed opposition to Roosevelt's creation of a third party. After the election, Cummins usually supported President Woodrow Wilson's initiatives to regulate business. He voted in favor of the 1917 United States declaration of war on Germany when Wilson requested it, but otherwise he sided most often with his party than with Wilson on other foreign policy issues, including opposing the arming of merchant ships in early 1917 and U.S. membership in a League of Nations.

In 1916, Cummins ran for the Republican presidential nomination. This time, with no incumbent president of his own party, delegates were split among over a dozen candidates. That year the party held primaries in 20 states and it was Cummins who won more of them than any other candidate. He finished first in the ballot in Minnesota, Nebraska, Montana, South Dakota and his home state of Iowa. He finished second in popular voting overall to Governor Martin Brumbaugh of Pennsylvania.

But primaries had not yet become the dominant method of selection presidential candidates yet in 1916. The party establishment was resentful of the progressives who had split the Republican vote in 1912, allowing Wilson to win. Cummings was still seen as a progressive, even though he had drifted towards conservatism in some aspects of policy. At the party's convention held in Chicago from June 7 to 10, 1916, Cummins finished fifth on the first and second ballots, receiving 65 and 85 votes respectively. After the second ballot, he released his delegates, and on the third ballot, Supreme Court Justice Charles Evans Hughes was able to win the nomination.

Cummins gradually lost influence within the party and even in his state. In June 1926, Smith W. Brookhart challenged and defeated Cummins in the Republican primary for Cummins' Senate seat. Cummins had made an enemy of Brookhart two months earlier, when Brookhart had been removed from Iowa's other U.S. Senate seat after a majority of his colleagues in the Republican-controlled U.S. Senate voted in favor of Democrat Dan Steck. Cummins had refused to take a position on the election contest, even though he knew that if Brookhart lost, he would likely run for Cummins's seat. The month after his primary defeat, Cummins died in Des Moines on July 30, 1926.
Collapse