Ronald Wilson Reagan was President of the United States from 1981 to 1989. He was 69 years old when elected and at the time was the oldest person ever elected to the office, a record which was surpassed in 2016. This was not Reagan's first bid for the presidency, it was actually his third. He first made a bid for the oval office in 1968, after having been elected as Governor of California just two years earlier. 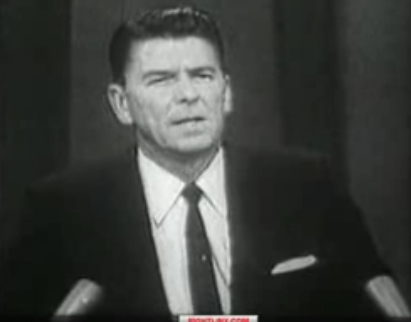 Reagan was born and raised into a poor family in northern Illinois. He graduated from Eureka College in 1932 and worked as a sports announcer on several regional radio stations. He worked at WHO radio in Des Moines as an announcer for Chicago Cubs baseball games. While traveling with the Cubs in California in 1937, Reagan took a screen test that led to a seven-year contract with Warner Brothers studios. He moved to Hollywood that year and became an actor and starred in a a number of major motion pictures. Reagan was elected to two terms as President of the Screen Actors Guild, the labor union for actors. In the 1950s, he transitioned into television and was also a motivational speaker at General Electric factories. Reagan had been a Democrat until 1962, when he became a conservative and switched to the Republican Party. In 1964, he gave a famous speech, called "A Time for Choosing", in which he supported Barry Goldwater's presidential campaign. Goldwater's campaign was a flop, but Reagan's speech earned him national attention and made him the new conservative spokesman. From this speech he was able to build a network of supporters, and he was elected Governor of California in 1966.

In late 1965 Reagan had announced that he was running for Governor in the 1966 election. He defeated former San Francisco mayor George Christopher in the Republican Party primary. Reagan's campaign had two basic themes:(1) "to send the welfare bums back to work," and (2) "to clean up the mess at Berkeley", referring to growing anti-war and anti-establishment student protests at the University of California at Berkeley. In 1966, Reagan defeated two-term governor Pat Brown, doing what former Vice President Richard Nixon could not do in 1962. He was sworn in on January 2, 1967. In his first term, he froze government hiring and approved tax hikes to balance the budget.

In 1967, as the national debate on abortion was becoming a prominent issue, Democratic California state senator Anthony C. Beilenson introduced the "Therapeutic Abortion Act" in an effort to reduce the number of "back-room abortions" performed in California. The state legislature passed the bill and sent it to Reagan. After many days of indecision, he signed the bill on June 14, 1967. Reagan later stated that had he been more experienced as governor, he would not have signed it. He said that after he recognized what the consequences of the bill were, he announced that he was pro-life.

In 1967, Reagan signed the Mulford Act, which repealed a law allowing public carrying of loaded firearms. The bill was named after Republican assemblyman Don Mulford. Following the bill's passage, the Black Panthers marched bearing arms upon the California State Capitol to protest it.

Reagan decided to test the 1968 presidential waters as part of a "Stop Nixon" movement. The plan was for Reagan to become a compromise candidate if neither Nixon nor second-place candidate Nelson Rockefeller received enough delegates to win on the first ballot at the Republican convention. Nixon had been the front-runner for the Republican nomination and he had formally began campaigning in January 1968. Nixon had done a considerable amount of campaigning behind the scenes for Republicans in Congress and in Governorships in the 1966 midterm elections. Many of the new congressmen and governors supported him. But there there was still considerable hesitation in the Republican Party about Nixon, who had lost the 1960 election and then lost the 1962 California gubernatorial election. These losses caused many to consider Nixon to be unelectable. But no one had been strong enough to challenge Nixon. Nixon's first challenger was Michigan Governor George W. Romney. A Gallup poll in mid-1967 showed Nixon with 39%, followed by Romney with 25%. But after Romney told Detroit talk show host Lou Gordon that he had been "brainwashed" by the military and the diplomatic corps into supporting the Vietnam War, the remark resulted in Romney being ridiculed in the national news media. Romney planned to run as an anti-war Republican, but his "brainwashing" comment lost him considerable support and with polls showing him far behind Nixon he withdrew from the race on February 28, 1968.

Another candidate considered was youthful Illinois Senator Charles Percy. He had considered a run for the presidency, but when his candidacy failed to gain support, he declined to have his name presented on the ballot for the Illinois presidential primary. Though he never disclaimed his interest in the presidential nomination, he no longer actively sought it either.

On March 12, 1968, Nixon won a resounding victory in the important New Hampshire primary with 78% of the vote. Anti-war Republicans wrote in the name of New York Governor Nelson Rockefeller, the leader of the Republican Party's liberal wing, who received 11% of the vote and became Nixon's new challenger. Rockefeller had originally not intended to run, but took up the torch after it was apparent that no other moderate Republican could mount a challenge against Nixon. But Nixon continued to lead Rockefeller in the polls throughout the primary campaign. Rockefeller defeated Nixon and Governor John Volpe in the Massachusetts primary on April 30, but otherwise he fared poorly in state primaries and conventions.

By early spring, the only person who looked like he might be able to challenge Nixon was Ronald Reagan. By this time Reagan was considered to be the leader of the Republican Party's conservative wing, and he was now Nixon's chief rival. The two faced off in the Nebraska primary on May 14, where Nixon won with 70% of the vote to 21% for Reagan and 5% for Rockefeller. While this was a wide margin for Nixon, Reagan remained Nixon's leading challenger. But Reagan's campaign did not catch on in other primary states. Nixon won the next primary of importance, Oregon, on May 15 with 65% of the vote. Nixon won all the following primaries except for California held on June 4, where Reagan's name was the only one to appear on the ballot. Reagan's victory in California actually gave him a plurality of the nationwide primary vote, but his poor showing in most other state primaries left him far behind Nixon in the actual delegate count. By the time of the convention Nixon, had between 656 and 692 delegates supporting or pledged to him, with 667 needed to secure the nomination, followed by Rockefeller with Reagan in third place.

When the 1968 Republican National Convention opened in Miami Beach, Florida, the Associated Press estimated that Nixon had 656 delegate votes, 11 short of the number he needed to win the nomination. There was a concern that Reagan and Rockefeller were planning to unite their forces in a "stop-Nixon" movement. But the wide philosophical chasm between these two candidates presented a considerable difficulty that this would happen. Still, Reagan hoped for victory. Since Barry Goldwater had done well in the Deep South, delegates to the 1968 Republican National Convention would have a larger Southern and conservative flavor than in past conventions. Reagan's plan was that if there was no victor on the first ballot, he could steal support from Nixon and build momentum as the convention went on. But the plan failed when Nixon narrowly secured the nomination on the first ballot, with the help of South Carolina Senator Strom Thurmond, who had switched parties in 1964. 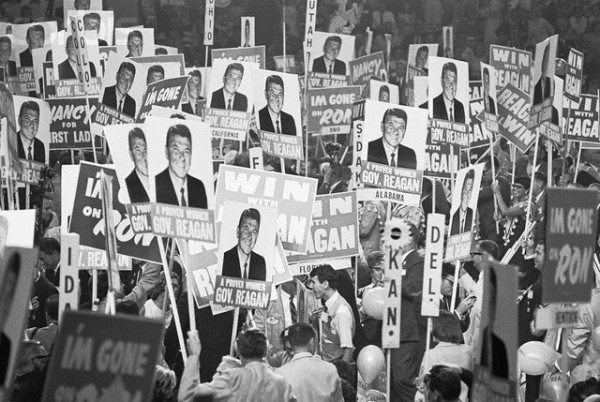 True to his party, and mindful of his future, Reagan went on to campaign for Nixon in the election. Nixon won the presidency with the help of California's 40 electoral votes. Reagan went on to finish his term as Governor of California and to win re-election to a second term. He would run for President again in 1976, losing his party's nomination to incumbent Gerald Ford, and in 1980, the third time would be the charm.
Collapse