1896 was an example of a time when a major political party held it's convention without a clear front runner for the party's presidential nominee. That year a divided Democratic Party rejected the two leading candidates in favor of a "dark horse" candidate who was a gifted orator and a populist. It was also a time when both candidates embarked on what was then a novel style of campaigning for President, significantly changing the ways in which candidates would run for president in elections to come. 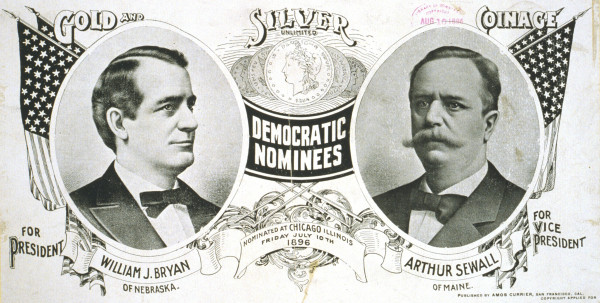 In 1896, the Democratic Party was divided over the issue of whether US currency would be tied to the gold standard (as many conservatives including incumbent President Grover Cleveland wanted) or to silver (as many in the rural factions of the party wanted). For three years, the nation had been stuck in an economic depression that resulted in low prices for commodities, low profits for business, high unemployment, and violent strikes. Economic issues ruled the day politically, especially tariff policy and the question of whether the gold standard should continue for the money supply. The Democratic Party was split on many of these issues. Incumbent President Grover Cleveland led the conservative faction, which adhered to the gold standard. The Panic of 1893 had weakened Cleveland's position in the party and gave strength to the agrarian faction that preferred silver, a policy which benefited farmers and others in the west.

This was in the era before primaries. The Democratic convention held in Chicago from July 7 to 11. Most of the delegates from the south and from the west supported the "free silver" ideas that were contrary to Cleveland's gold standard. There were so many of them that the convention repudiated President Cleveland's gold standard policies and then rejected Cleveland himself. This left the convention wide open. There was no obvious successor to Cleveland and a two-thirds vote was required for a candidate to win the nomination.

The silverites appeared to have enough votes to nominate a candidate, but the party was still very divided. When a vote was taken on an anti-silver measure in the platform, delegates from the eastern states (from Maryland to Maine) voted 96% in favor. They made up 28% of the convention delegates. The other delegates voted 91% against. Doing the math, the silverites looked like they could count on a super-majority of 67% of the delegates who supported their position. It was clear that they could select the party's candidate if they could unite behind a single candidate. But it was unclear who than candidate was going to be.

At first it looked as if that candidate would be Congressman Richard Bland of Missouri. He was such a strong supporter of silver backed currency that his nickname was "Silver Dick" (apparently nobody snickered over that one in 1896). Bland was somewhat of a reluctant candidate and he did not attend the convention. He remained at his farm in Lebanon, Missouri as the convention took place, communicating by telegram occasionally.

William Jennings Bryan was a former two-term congressman from Nebraska who was elected in the Democratic landslide of 1890 and re-elected in 1892. He failed in a bid in 1894 to win election to the US Senate. Bryan was lawyer and a very gifted orator. He was also a strong supporter of the silver movement and had been one of the founders of the American Bimetallic League, which then evolved into the National Bimetallic Union, and finally the National Silver Committee. The prevailing economic theory held by many farmers and others in rural America at the time was that, by increasing the amount of currency in circulation, the crops farmers grew would receive higher prices. This point of view was opposed by banks and bond holders who feared inflation if the amount of currency increased, and by urban workers who feared inflation would erode their purchasing power.

Bryan's plank for free silver was added to the Chicago Democratic Platform. Bryan was a member of the resolutions committee, and his efforts at promoting his position led many Democrats to believe that Bryan had the ability to bring about change. Prior to the convention, Bryan had been speaking across the country from 1894 to 1896, on the advantages of silver-backed currency and he was building a grass-roots reputation as a powerful champion of his cause. 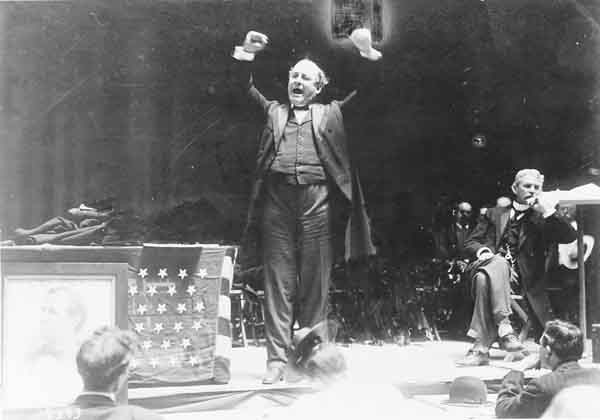 At the 1896 convention, Bryan had the opportunity to address the delegates on the subject in what was called his "Cross of Gold" speech. He attached the eastern moneyed class for supporting the gold standard at the expense of the average worker. Bryan presented a passionate defense of farmers and factory workers struggling to survive the economic depression, and he attacked big-city business owners and leaders as the cause of much of their suffering. He called for reform of the monetary system, an end to the gold standard, and government relief efforts for farmers and others hurt by the economic depression. Bryan's speech was so dramatic that after he had finished many delegates carried him on their shoulders around the convention hall. His speech was an overwhelming success at the convention and he soon replaced Bland as the favorite of the silverites. Bland was also opposed by many in the South, in part because his wife and daughter were Catholic. Some bimetallist supporters tried to draft Republican Senator Henry M. Teller of Colorado, but his candidacy never got off the ground. The only major candidate that did support the gold standard was former Pennsylvania Governor Robert E. Pattison.

It took five ballots, but Bryan won his party's nomination. Bland led on the first three ballots before Bryan passed him on the fourth, by a margin of 280 for Bryan to 241 for Bland. When Bland learned of the results of the fourth ballot, he sent a telegram to his supporters in Chicago throwing his support behind Bryan. In the telegram he said: "Put the cause above the man." On the fifth ballot Bryay received 652 votes, with 95 votes for Patterson and 11 for Bland.

Arthur Sewall, a wealthy shipbuilder from Maine, was chosen as the vice-presidential nominee. The hope was that Sewall might spend some of his money help pay some campaign expenses.

At the time Bryan was just 36 years of age, only a year older than the minimum age required by the Constitution to be president. Bryan remains the youngest man ever nominated by a major party for president.

The Republican Party had thought that 1896 would be an easy victory because of the divisions within the Democratic Party. But the nationwide response to the Bryan candidacy changed everything. By summer, Bryan was leading in the South and West and the McKinley campaign had to re-evaluate its strategy. McKinley had planned on avoiding the gold vs. silver issue, but now he retooled his campaign to to portray Bryan and the silverite message as dangerous to the economy. McKinley was portrayed as the safe and sound champion of jobs and sound money. His campaign even spun that term, "sound money", as one that appealed to voters and conveyed the image that they would be safe in parking their votes with him. His high tariff proposals promised voters a return to prosperity for everyone.

The McKinley campaign was unique because of its centralized message and strategy. It used the Republican National Committee instead of the state parties to get its message out. The McKinley campaign invented a new form of campaign financing that has dominated American politics ever since. Instead of asking office holders to return a cut of their pay, McKinley's campaign manager Mark Hanna went to financiers and industrialists and sought large corporate donations.He explained that if Bryan won, that would be very expensive to corporate interests. He asked them what it was worth to the business not to have Bryan as president. Hanna raised $3.5 million. He brought in banker (and future Vice-President) Charles G. Dawes to run his Chicago office and spent about $2 million in the region.

Meanwhile, traditional campaign donors of the Democratic Party rejected Bryan. His campaign raised about $500,000, much of it from businessmen with interests in silver mining. With their superior fundraising, Republicans funded more rallies, speeches, and parades, as well as hundreds of millions of pamphlets attacking Bryan and praising McKinley. Bryan had to rely on passing the hat at rallies.

Republicans personalized their attacks on Bryan as a dangerous fanatic. They printed fake dollar bills which had Bryan's face and read "IN GOD WE TRUST...FOR THE OTHER 53 CENTS". Labor unions were reluctant to endorse Bryan because their members feared inflation. Railroad workers worried that Bryan's silver programs would bankrupt the railroads, which were in a shaky financial condition from the panic of 1893 and whose bonds were payable in gold. Factory workers were afraid that their urban cost of living would increase through inflation.

A new feature in presidential campaigns was in the style of campaigning by having the Presidential candidate go directly to the people. While McKinley remained at home in Ohio, Bryan traveled 18,000 miles in 3 months, concentrating on the critical states of the Midwest. Bryan believed that his best chance to win the election was to conduct a vigorous national speaking tour by train. Bryan's exceptional oratory and his passion generated huge crowds. In just 100 days, Bryan gave over 500 speeches to several million people. His record was 36 speeches in one day in St. Louis. Relying on just a few hours of sleep a night, he traveled 18,000 miles by rail to address five million people, often in a hoarse voice.

In contrast to Bryan's method, McKinley conducted a novel "front porch" campaign from his home in Canton, Ohio. Hanna brought 500,000 voters by train to McKinley's home. His staff prepared both the candidate's remarks which were then issued to the newsmen and telegraphed nationwide to appear in the next day's papers. Meanwhile Bryan gave much the same talk over and over again. Hanna had a large number of Republican orators (including Theodore Roosevelt) travel around the nation as surrogates for McKinley, denouncing Bryan as a dangerous radical. 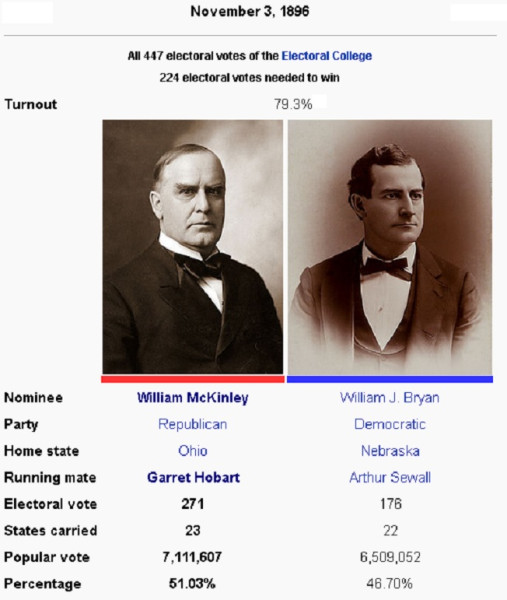 On election day McKinley secured victory by carrying the core of the East and Northeast, while Bryan did well in the South, West, and rural Midwest. McKinley gained large majorities among the middle class, skilled factory workers, railroad workers, and large-scale farmers. The national popular vote was relatively close, with McKinley receiving 51% of the popular vote to Bryan's 47%. In the electoral college McKinley won in a landslide, receiving 271 electoral votes to Bryan's 176. (224 were needed to win).

Bryan enjoyed a measure of success in that his party did better than many predicted it would. This would be the first of three tries for Bryan, who would lose to McKinley again in 1900 and to William Howard Taft in 1908.
Collapse