Her autobiography is entitled Unbought and Unbossed. In an era when it seemed unthinkable for a woman or an African-American, let alone an African-American woman, to ever become President of the United States, Shirley Chisholm bravely ignored these barriers and challenged a number of her white male colleagues for the leadership of her party. In 1972, she became the first African-American candidate for a major party's nomination for President of the United States, and the first woman to run for the Democratic Party's presidential nomination.Though she did not win her party's nomination, it seems incorrect to say that she was unsuccessful. Hers is a remarkable story. 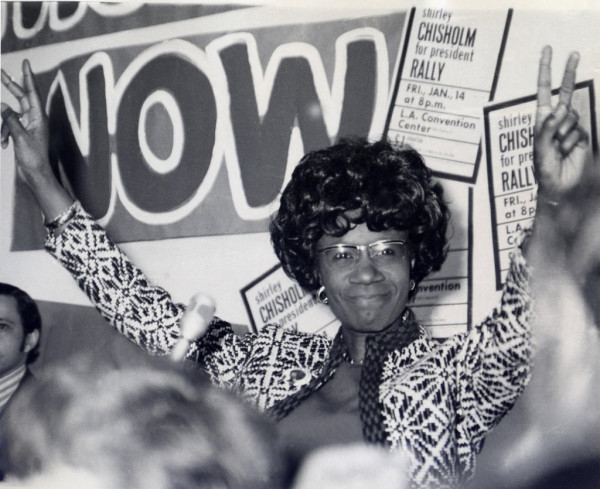 Her name at birth was Shirley Anita St. Hill and she was born on November 30, 1924, in Brooklyn, New York. Her parents were immigrants from the Caribbean. Her father, Charles Christopher St. Hill, was born in British Guiana, and lived in Barbados before arriving in the United States aboard the S.S. Munamar from Antilla, Cuba a year and a half before Shirley was born. Her mother, Ruby Seale, was born in Christ Church, Barbados, and arrived in New York City aboard the S.S. Pocone on March 8, 1921. Her father worked an unskilled laborer and as a baker's helper, while her mother worked as a seamstress and as a domestic worker. In November 1929, when Shirley turned five, she and her two sisters were sent to Barbados on the S.S. Vulcana to live with their maternal grandmother where they lived until May 19, 1934. It was here that she was able to obtain an education, something she appreciated. In her 1970 autobiography, she wrote: "Years later I would know what an important gift my parents had given me by seeing to it that I had my early education in the strict, traditional, British-style schools of Barbados. If I speak and write easily now, that early education is the main reason."

In 1939, she attended Girls' High School in the Bedford–Stuyvesant neighborhood of Brooklyn, an integrated school. She earned her Bachelor of Arts from Brooklyn College in 1946, where she won awards for debating. She met her first husband, Conrad Chisholm in the late 1940s. He was a private investigator who specialized in negligence-based lawsuits. They were married in 1949. She taught in a nursery school while obtaining her MA in elementary education from Teachers College at Columbia University in 1952. From 1953 to 1959, she was director of the Friends Day Nursery in Brownsville, Brooklyn, and of the Hamilton-Madison Child Care Center in lower Manhattan. From 1959 to 1964, she worked an educational consultant for the Division of Day Care, and cultivated an interest and an expertise in the fields of early education and child welfare.

It was while running a day care center that she became interested in politics. She volunteered with the Bedford-Stuyvesant Political League and the League of Women Voters and in 1965 she was elected asa Democratic member of the New York State Assembly, sitting in the 175th, 176th and 177th New York State Legislatures. In the legislature she was successful in obtain unemployment benefits for domestic workers. She also sponsored the SEEK program (Search for Education, Elevation and Knowledge), which gave disadvantaged students the opportunity to enter college.

In 1968 Shirley Chisholm ran for the U.S. House of Representatives from New York's 12th congressional district, a district which had been significantly redrawn to focus on Bedford-Stuyvesant. She defeated the white incumbent in the former 12th, Representative Edna F. Kelly. Her campaign slogan was the title of her future autobiography: "Unbought and unbossed". In the June 18, 1968 Democratic primary, she defeated two other African-American and her victory in the general election was considered an upset. One of the candidates she defeated was James L. Farmer, Jr., the former director of the Congress of Racial Equality who was running as a Liberal Party candidate with Republican support. She won by an large margin, nearly double the votes of her closest competitor, making her the first African-American woman to be elected to Congress.

Chisholm was assigned to the House Agricultural Committee. This was seen as a sign of disrespect, given that her urban district made this assignment irrelevant to her constituents. At first she was upset and insulted by this assignment, but a Rabbi friend of hers suggested that she use the surplus food to help feed the poor and hungry. She helped in the creation of the Special Supplemental Nutrition Program for Women, Infants and Children (WIC) program. She was then also placed on the Veterans' Affairs Committee. Her support for Hale Boggs as House Majority Leader led to Boggs assigning her to the Education and Labor Committee, something she coveted and appreciated.

Chisholm hired an all-female staff for her office of which half were African-American. Chisholm was one of the founding members of the Congressional Black Caucus in 1971 and that same year, she was also a founding member of the National Women's Political Caucus. In May of 1971 she and fellow New York Congresswoman Bella Abzug introduced a bill to provide $10 billion in federal funds for child care services by 1975. A less expensive version of the bill, sponsored by Senator Walter Mondale of Minnesota, eventually passed the House and Senate as the Comprehensive Child Development Bill, but was vetoed by President Richard Nixon in December 1971. Nixon said that the bill was too expensive and would undermine the institution of the family. 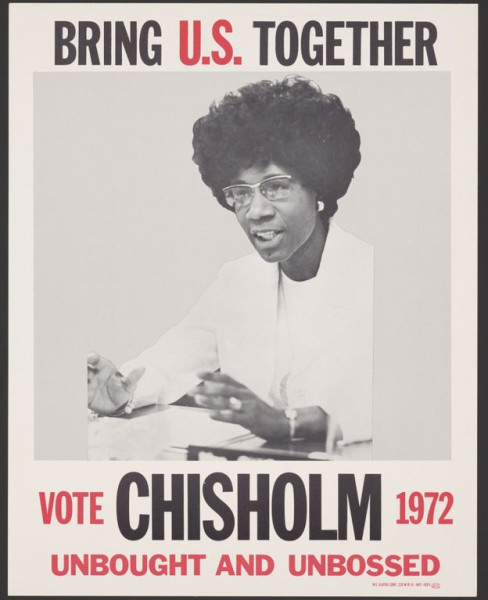 On January 25, 1972 Chisholm began exploring her candidacy for President of the United States, making the announcement at a Baptist church in her district in Brooklyn. She became the first African-American candidate from one of the two major parties to run for President of the United States, as well as the first woman ever to run for the Democratic Party's presidential nomination. (Senator Margaret Chase Smith of Maine had previously run for the Republican presidential nomination in 1964). Her campaign was badly underfunded, and the media did not seem to consider her to be a serious candidate, with reports focusing on her race and gender, rather than on her message. She was ignored by much of the Democratic political establishment and received little support, even from her African-American male colleagues. During the campaign a number of threats were made against her life and her husband Conrad Chisholm served as her bodyguard until U.S. Secret Service protection was given to her in May of 1972.

Chisholm skipped the March 7 New Hampshire primary and focused instead on the Florida primary, held on March 14. Because of Congressional responsibilities, she only made two campaign swings there and received just 3.5 percent of the vote, finishing in seventh place. She received votes in primaries in fourteen states with her largest number of votes coming in the June 6 California primary, where she received 157,435 votes for 4.4 percent and a fourth-place finish. Her best percentage in a primary was in North Carolina, where she received 7.5 percent for a third-place finish. Overall, she won 28 delegates during the primaries. She received support from the National Organization for Women. Betty Friedan and Gloria Steinem attempted to run as Chisholm delegates in New York. She received 430,703 votes in total in the primaries (2.7%), finishing in seventh place among the Democratic candidates.

At the 1972 Democratic National Convention in Miami Beach, Florida, Chisholm received some additional support from former Vice-President Hubert Humphrey, who was also a candidate for the nomination. When Humphrey's efforts to stop the nomination of Senator George McGovern failed, he consented to his African-American delegates voting for Chisholm as a symbolic gesture. She also received the votes of disenchanted delegates from other candidates, and with the delegates that she had won in the primaries, this gave her a total of 152 first-ballot votes. She received 23 delegates from Ohio even though she had not been on the ballot in that state's primary. She finished fourth in the convention vote.

Here is a video of Shirley Chisholm discussing her bid for the presidency in 2005:

During the campaign Chisholm created controversy among her own supporters when she visited Alabama Governor George Wallace in the hospital soon after his shooting in May of 1972. In an interview she stated that in spite of his racist positions, Wallace was quite polite and friendly to her. She said that when she went to visit Wallace in the hospital, she was asked not to stay too long because of his health, but that when it came time for her to leave, Wallace held her hand tightly and begged her not to go.

Chisholm remained in Congress until 1982. From 1977 to 1981, Chisholm served as Secretary of the House Democratic Caucus. She continued to advocate for improved opportunities for inner-city residents and during the Vietnam War she was a vocal opponent of the draft. She also argued for increased spending on education, health care and social services, and for reduced military spending. She opposed American involvement in the Vietnam War and during the Jimmy Carter administration, she called for better treatment of Haitian refugees.

Chisholm divorced her first husband in February 1977 and later that year she married Arthur Hardwick, Jr., a former New York State Assemblyman whom Chisholm had served with. Chisholm had no children. Hardwick was injured in an automobile accident and this contributed to her decision to retire from Congress. She also expressed dissatisfied with the direction that the nation was taking as the Reagan Revolution gained momentum. She retired from Congress in 1982. Her second husband passed away four years later in 1986.

After leaving Congress, Chisholm taught a variety of subjects at Mount Holyoke College in Massachusetts, including politics and sociology. She taught there from 1983 to 1987. She also traveled extensively throughout the nation, visiting over 150 college campuses. In 1984 and 1988, she campaigned for Jesse Jackson. In 1990, Chisholm, along with 15 other African-Americans, formed the African-American Women for Reproductive Freedom.

Chisholm retired to Florida in 1991. In 1993, President Bill Clinton nominated her to be United States Ambassador to Jamaica, but she was unable to serve due to poor health. Her nomination was withdrawn. Chisholm died on January 1, 2005, in Ormond Beach, Florida, after suffering several strokes. She is buried in the Oakwood Mausoleum at Forest Lawn Cemetery in Buffalo. The inscription on her vault reads: "Unbought and Unbossed".
Collapse