On Tuesday of this week, California will hold its Democratic Primary, part of the massive Super Tuesday contest. In early June of 1968, New York Senator and former Attorney-General Robert F. Kennedy won the California Democratic Primary and lost his life. Kennedy was assassinated at the Ambassador Hotel, while leaving the ballrooom through the kitchen, after giving his victory speech. It is unclear whether or not Kennedy would have won his party's nomination that year, and possibly the presidency. It was still during the era when the party establishment had more influence on the selection of the presidential candidate than primary voters did. But it is always interesting to speculate. 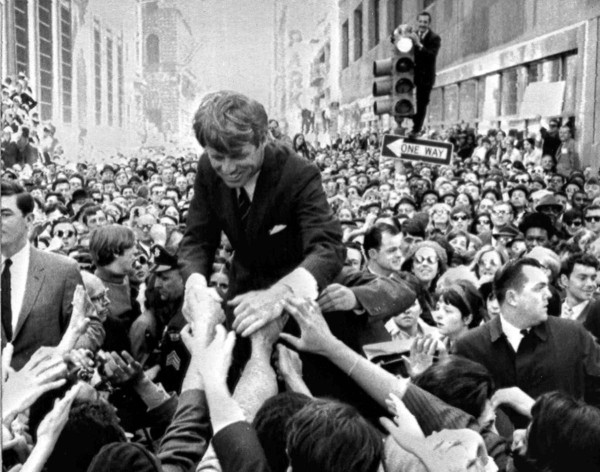 Kennedy entered the race for President late that year. Many expected that incumbent President Lyndon Johnson would run for re-election. Kennedy had contemplated running against Johnson, who was losing popularity as casualties mounted in the Vietnam War and protests against the war grew louder at home. Senator Eugene McCarthy had announced his intention to run against Johnson for the nomination on November 30, 1967. At a breakfast with reporters at the National Press Club on January 30, 1968, Kennedy said that he had no plans to run for President that year, but a few weeks later that would change.

In early February 1968, after the Tet Offensive in Vietnam, Kennedy was being urged to challenge Johnson for the presidency. On February 29, 1968, the Kerner Commission issued a report on the racial unrest that had affected American cities during the previous summer. The Kerner Commission blamed "white racism" for the violence, but its findings were dismissed by Johnson. Kennedy had never been a fan of Johnson's, and had urged his brother not to choose Johnson as his running mate. Kennedy was said to have asked his advisor, historian Arthur M. Schlesinger Jr: "How can we possibly survive five more years of Lyndon Johnson?"

On March 10, Kennedy traveled to California, to meet with civil rights activist César Chávez, who was ending a 25-day hunger strike. The weekend before the New Hampshire primary, Kennedy had told several aides that he would run if he could persuade little-known Senator Eugene McCarthy of Minnesota to withdraw from the presidential race. On March 12, the New Hampshire primary was held. Kennedy was not a candidate, but did receive write in votes. Johnson barely won the primary. McCarthy, who polled 42 percent of the vote, making it unlikely that McCarthy would agree to withdraw. But he was emboldened by Johnson's poor showing in the primary.

On March 16, Kennedy made his announcement. He said, "I am today announcing my candidacy for the presidency of the United States. I do not run for the presidency merely to oppose any man, but to propose new policies. I run because I am convinced that this country is on a perilous course and because I have such strong feelings about what must be done, and I feel that I'm obliged to do all I can." Kennedy made this announcement from the same spot in the Senate Caucus Room where his brother John F. Kennedy had announced his presidential candidacy in January 1960.

McCarthy supporters called Kennedy an opportunist, arguing that McCarthy had done all of the hard work to coalesce the anti-war support. With Kennedy joining the race, liberal Democrats were worried that votes among supporters of the anti-war movement would now be split between McCarthy and Kennedy. On March 31, Johnson stunned the nation by dropping out of the presidential race. He withdrew from the election during a televised speech, where he also announced a partial halt to the bombing of Vietnam and proposed peace negotiations with the North Vietnamese.

Vice President Hubert Humphrey, who had earned a reputation as a strong supporter of labor unions and civil rights, entered the race on April 27. He had the support of the party establishment, and of Johnson himself. Kennedy had planned to take a page from his brother's playbook and win the nomination through popular support in the primaries. Because Democratic party leaders would influence delegate selection and convention votes, Kennedy's strategy was to influence the decision-makers with crucial wins in the primary elections.

Kennedy delivered his first campaign speech on March 18 at Kansas State University, where he had previously agreed to give a lecture honoring former Kansas governor and Republican Alf Landon. At Kansas State, Kennedy drew a "record-setting crowd of 14,500 students" for his Landon Lecture. In his speech, Kennedy attacked Johnson's Vietnam policy. He took some of the blame for past decisions, saying, "I was involved in many of the early decisions on Vietnam, decisions which helped set us on our present path", but added that "past error is not excuse for its own perpetration." Later that day at the University of Kansas Kennedy spoke to an audience of 19,000—one of the largest in the university's history. During that speech he said, "I don't think that we have to shoot each other, to beat each other, to curse each other and criticize each other, I think that we can do better in this country. And that is why I run for President of the United States."

Kennedy went on to campaign in the Democratic primaries in Indiana, Washington, DC, Nebraska, Oregon, South Dakota, and California. His platform emphasized racial equality, and non-aggression in foreign policy. His campaign was energized by support from many youthful supporters. His policy objectives were popular on college campuses, but not with the business world. Businesses were opposed to the tax increases that would be necessary to fund Kennedy's proposed social programs. During a speech given at the Indiana University Medical School, Kennedy was asked, "Where are we going to get the money to pay for all these new programs you're proposing?" Kennedy replied to the medical students, who were poised to enter lucrative careers, "From you."

In 1968, Kennedy ended up winning four state primaries: Indiana, Nebraska, South Dakota, and California; as well as Washington D.C. McCarthy won six state primaries: Wisconsin, Pennsylvania, Kennedy's native state of Massachusetts, Oregon, New Jersey, and Illinois. In the state primaries in which they campaigned directly against one another, Kennedy won three (Indiana, Nebraska, and California) while McCarthy won only one (Oregon). An April 28 Gallup poll showed Kennedy at 28% support by Democratic voters, Humphrey behind by three points and McCarthy ahead by five.

On April 4, 1968, Kennedy made his first campaign stop in Indiana at the University of Notre Dame in South Bend, followed by a speech at Ball State University in Muncie. After leaving the stage at Ball State, Kennedy boarded a plane for Indianapolis. When he arrived in Indianapolis he was informed of Dr. Martin Luther King's assassination. Later that evening, Kennedy made a brief speech on the assassination of King to a crowd gathered for a political rally at 17th and Broadway—an African American neighborhood near the north side of Indianapolis. He attempted to console the crowd and made calls for peace and compassion. He later King's funeral in Atlanta.

In the Oregon primary, Kennedy's campaign was not strong and his platform emphasizing poverty, hunger, and minority issues did not resonate with Oregon voters. His campaign chairperson later said of the candidate's calls for unity amongst Americans: "As far as Oregonians were concerned, America had not fallen apart." The McCarthy campaign charged that Kennedy had illegally taped Martin Luther King, Jr. as United States Attorney General. Kennedy realized that losing the Oregon primary could damage his credibility as a candidate. He campaigned for sixteen hours a day in Oregon and in the weeks before the election, his campaign canvased 50,000 homes. Despite this, on May 28, McCarthy won the Oregon primary with 44.7%. Kennedy received 38.8%.

After the loss in Oregon, Kennedy's campaign moved on to California. McCarthy's California campaign was well-funded and organized. On June 1, during the final days of the California campaign, Kennedy and McCarthy met for a televised debate. Kennedy had hopes of denting McCarthy's strength in California, but the debate was dubbed by pundits as "indecisive and disappointing." On June 3, Kennedy traveled to San Francisco, Los Angeles, San Diego, and Long Beach. He ended up winning the state with 46% of the vote to McCarthy's 42%.

Around midnight on June 4, Kennedy addressed supporters at the Ambassador Hotel in Los Angeles. He expressed a desire to heal the many divisions within the country. After addressing his supporters during the early morning hours of June 5, in a ballroom at The Ambassador Hotel in Los Angeles, Kennedy left the ballroom through a service area to greet kitchen workers. In a crowded kitchen passageway, Sirhan Sirhan, a 24-year-old Palestinian-born Jordanian, opened fire with a .22 caliber revolver and mortally wounded Kennedy. Following the shooting, Kennedy was rushed to Central Receiving Hospital and then transferred to The Good Samaritan Hospital, where he died early in the morning on June 6. 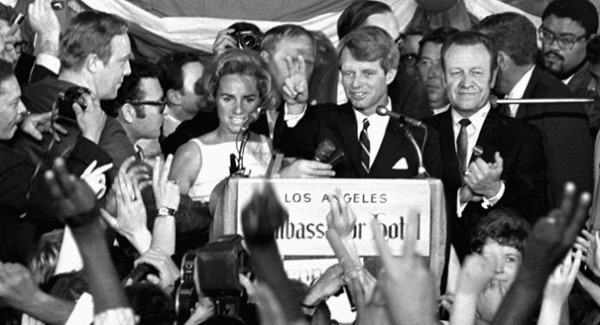 Kennedy's body was returned to New York City, where he lay in repose at St. Patrick's Cathedral for several days before the Requiem Mass was held there on June 8. His younger brother, Senator Edward "Ted" Kennedy, eulogized him with saying: "My brother need not be idealized or enlarged in death beyond what he was in life; to be remembered simply as a good and decent man, who saw wrong and tried to right it, saw suffering and tried to heal it, saw war and tried to stop it." Kennedy concluded the eulogy by paraphrasing George Bernard Shaw, "As he said many times, in many parts of this nation, to those he touched and who sought to touch him: 'Some men see things as they are and say why? I dream things that never were and say why not?'" Later that day, a funeral train carried Kennedy's body from New York to Washington, D.C., where he was laid to rest at Arlington National Cemetery.
Collapse