By the time the 1948 Republican presidential primaries, came around, the party believed that they were due for a return to the White House. Democrat Franklin Roosevelt had won the last four elections, but Roosevelt was not dead and gone. His successor, Harry Truman, appeared vulnerable, so much so that Truman himself was willing to step aside from the office if popular General Dwight Eisenhower wanted his job. In fact both major parties tried to woo Eisenhower, the most popular general of World War II, to be their candidate in the upcoming election. No one was sure whether Eisenhower was a Democrat or a Republican. It was later discovered that he was a moderate Republican, but in 1948 he flatly refused the nomination of either political party. 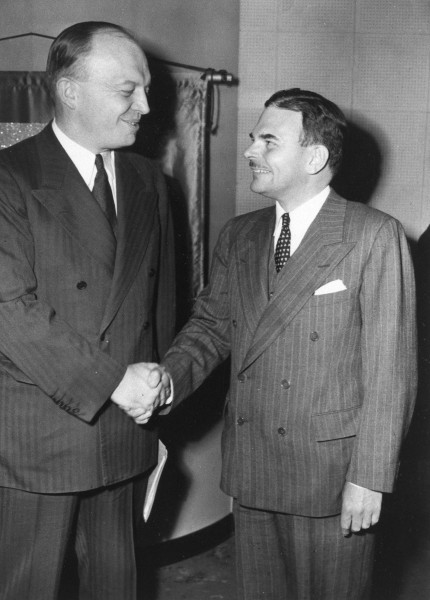 In 1948 not every state held a primary or caucus as they do today. Only 12 states held such contests, and the most memorable of those was probably the Oregon Primary, because of the fact that it was the first state to broadcast (by radio) a candidates' debate. After Eisenhower refused to run, the contest for the Republican nomination was between New York Governor Thomas E. Dewey (who had been the party's presidential candidate four years earlier in 1944), former Minnesota Governor Harold Stassen, General Douglas MacArthur, Ohio Senator Robert A. Taft and California Governor Earl Warren. Dewey was considered to be the front runner when the primaries began. He was seen as the leader of the party's powerful eastern establishment, where most of the money to run campaigns came from. In 1946 he was re-elected Governor of New York by the largest margin in state history. But Dewey was not universally liked by Republicans. He was perceived by many as cold, stiff and condescending.

Senator Robert Taft, the son of former President William Howard Taft, was the leader of the conservative wing of the party. He opened his campaign in 1947 by attacking the Democratic Party's domestic policy and foreign policy. Taft was a non-interventionist who opposed many of the alliances the U.S. government had made with other nations to fight the Cold War with the Soviet Union. He believed that his nation should focus on its own problems and keep its nose out of the business of other nations. On domestic issues, Taft and his fellow conservatives wanted to abolish many of the New Deal social welfare programs that had been created under Roosevelt. They considered these programs to be too expensive and harmful to business interests. But like Dewey, Taft was also not universally liked. Some in his party thought of him as a dull campaigner, and as someone who was too conservative and controversial to be electable.

The most surprising candidate of 1948 was Governor Harold Stassen of Minnesota politics. Stassen had been elected Governor of Minnesota at the age of 31. He resigned as governor in 1943 in order to serve in the United States Navy in World War II. In 1945 he had served on the committee which created the United Nations. Stassen was seen as the most liberal of the Republican candidates. But he turned out not to be a good campaigner, and he was criticized for being too vague on many issues. The contrast was especially striking when Stassen was compared to the plain-spoken President Harry Truman.

Despite this setback, Stassen was still ahead of Dewey in the polls as the upcoming Oregon primary approached on May 21st. Dewey understood that a defeat in Oregon would likely end his chances at the nomination. He sunk a lot of money and manpower into the state and he also took a political gamble. He agreed to a debate with Stassen in Oregon on national radio. This was the first-ever radio debate between presidential candidates. The sole topic of the debate concerned whether to outlaw the Communist Party in the United States.

Stassen, despite his liberal reputation, decided to argue in favor of outlawing the party. Dewey, who had earned a reputation as a crime-busting prosecutor, took the opposite position. The debate was held on May 17, 1948, in a Portland, Oregon radio studio, with about fifty reporters present. The broadcast was carried on hundreds of stations, and heard by a nationwide audience estimated at forty million. It was a pivotal moment in the campaign as the Oregon primary would be the final contest before Republicans met for their convention in Philadelphia, in late June, to choose a nominee.

Senator Robert A. Taft, and popular California Governor Earl Warren decided not to do any campaigning in the state. General Douglas MacArthur was still in Japan, where he was the American proconsul. The primaries didn't award enough delegates to nominate a candidate, but they were an important way of getting attention for a candidate and giving him the appearance of momentum. Oregon became a showdown between Dewey and Stassen.

The format of the radio debate resembled a high-school debate and was nothing like contemporary political debates. The candidates were given a single question, one that was relevant in light of the post-war Red Scare. The question the candidates were asked to argue was “Shall the Communist Party of the United States be outlawed?” Each candidate delivered a potted twenty-minute speech on the topic, with eight and a half minutes reserved for rebuttals. Stassen took the affirmative. He argued that the domestic party was “directed by the rulers of the foreign power” in the Kremlin. The not-yet-famous Wisconsin Senator Joseph McCarthy, who in early 1950 would accuse the State Department of harboring a large nest of Communist spies and traitors, was in Portland as a Stassen supporter.

Dewey, the former Manhattan district attorney, took the other side. He cited the Bill of Rights. He said in his remarks, “We know that if we will always keep every idea that’s bad out in the open, we will lick it.” At one point Dewey famously stated that "you can't shoot an idea with a gun." An audio version of the debate still exists, and it sounds rather boring by modern standards. But Dewey was judged to be more persuasive. 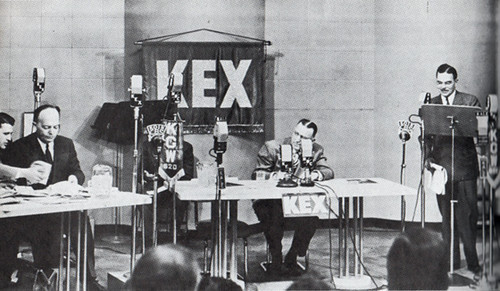 Dewey went on to win the Oregon primary and his party's presidential nomination on the third ballot at the convention that summer, in Philadelphia. In Oregon he narrowly defeated Stassen by a margin of 51.79% to 47.56%. Republicans in 1948 thought that they had an excellent chance of defeating President Truman. So did practically all of the news media. But as things turned out, Truman rallied for a surprising upset victory, perhaps the most surprising until 2016. Dewey’s defeat in 1948 haunted the Republican Party. Second guessing about whether Dewey was he too liberal, too eastern, or too effete may have played a role into pushing the party to its present position on the conservative end of the ideological spectrum, with the subsequent candidacies of men like Barry Goldwater, Richard Nixon, Ronald Reagan, George W. Bush and Donald Trump.
Collapse