On February 9, 1773 (247 years ago today) William Henry Harrison, the 9th President of the United States, was born in Charles City County, Virgina. His father Benjamin Harrison V had been one of the signers of the Declaration of Independence. William Henry hold the distinction of being the President to serve the shortest time in office, a mere 31 days. He is also the first President to have died in office. He was 68 years, 23 days old when elected, the oldest president elected until Ronald Reagan in 1980, a record since surpassed by the current incumbent. Harrison is also the last President to be born before the signing of the Declaration of Independence. 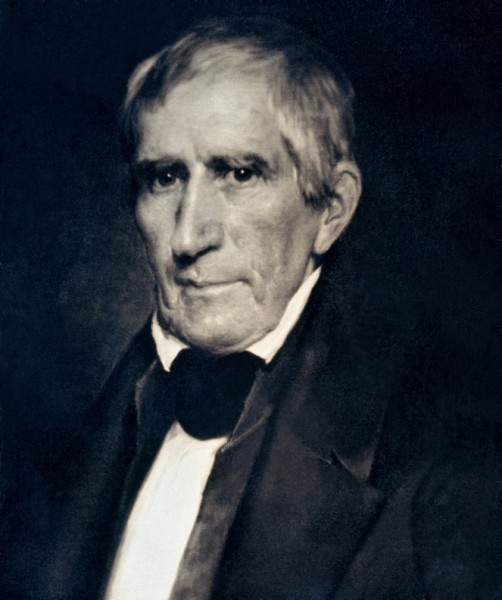 Harrison died of complications from pneumonia on April 4, 1840. His death caused a brief constitutional crisis, one that ultimately resolved many questions about presidential succession left unanswered by the Constitution until passage of the 25th Amendment.

Before election as president, Harrison was a soldier, the first territorial congressional delegate from the Northwest Territory, governor of the Indiana Territory and a U.S. representative and senator from Ohio. He originally gained national fame for leading U.S. forces against American Indians at the Battle of Tippecanoe in 1811, where he earned the nickname "Tippecanoe" (or "Old Tippecanoe"), but historical accounts of that battle tell us that this really wasn't his most shining moment as a general. But in the subsequent War of 1812, his military praise is better justified, especially as the result of his victory at the Battle of the Thames in 1813, which brought an end to hostilities in his region. 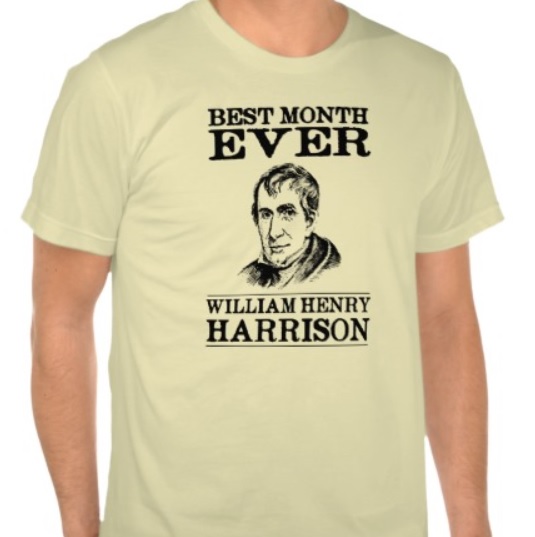 After the war, Harrison moved to Ohio, where he was elected to the United States Congress, and in 1824 he became a member of the Senate. He also served a brief term before being appointed as "Minister Plenipotentiary" (or what we would today call and Ambassador) to Colombia in May 1828. After being removed from that job for political reasons, he returned to his farm in Ohio, where he lived in relative retirement until he was nominated for the presidency in 1836. He lost that election because of an ill-conceived scheme in which the Whig Party ran several candidates, but he ran as the lone nominee for the Whig Party in 1840 and defeated incumbent President Martin Van Buren in what was perhaps the first presidential campaign in which spin doctoring reigned supreme. Even though he had been born into relative wealth, he was portrayed as a poor country boy from a log cabin (pure fiction) running against the silver-spoon candidate Van Buren. Whether it was this or his opponent being saddled by a poor economy, Harrison won the election handily.

It is said that Harrison died because he failed to dress warm enough when he gave what would become the longest inaugural address on a cold wet day. But in fact his illness did not arise until more than three weeks later when he developed a cold that worsened, rapidly turning into pneumonia. He sought to rest in the White House, but could not find a quiet room because of the steady crowd of office seekers. His doctors tried cures, that included opium, castor oil, leeches, and Virginia snakeweed. But, surprise surprise, these treatments only made Harrison worse.

He died nine days after becoming ill, at 12:30 am on April 4, 1841. His last words were to his doctor, but historian assume that they were meant for his Vice-President, John Tyler. He said "Sir, I wish you to understand the true principles of the government. I wish them carried out. I ask nothing more." 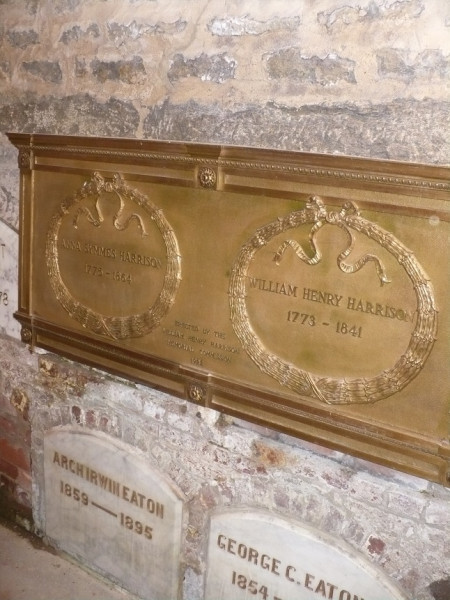 Harrison would have another distinction: he would be the only President (so far) to have a grandson become President. That happened in 1888 when his grandson Benjamin Harrison would win the White House. 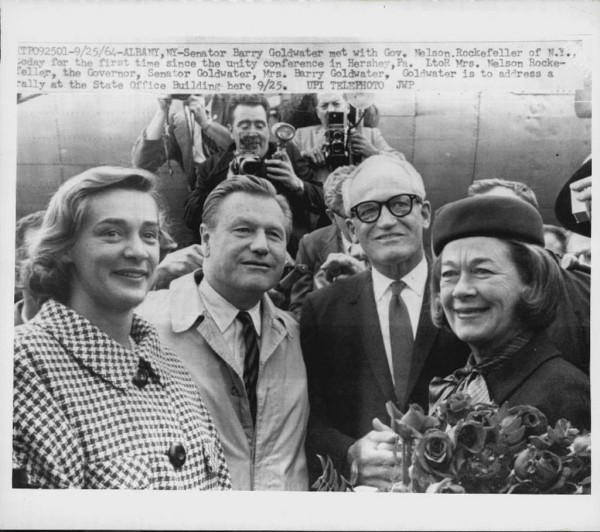 In early 1963, several Republicans were seen as potential candidates for President. New York Governor Nelson Rockefeller had just been re-elected in 1962. To prepare for a run for the presidency, Rockefeller visited Republicans in the Midwest in the spring of 1963 to measure support for his candidacy and was encouraged by the response. Former Governor Goodwin Knight of California opened a Rockefeller campaign office in California, but Rockefeller asked him to close it on March 29 until he had decided to run. Rockefeller's popularity took a hit on May 4, 1963 when he married Margaretta Large "Happy" Fitler, after being divorced the previous year. The Republican Citizens Committee, a caucus of moderate Republicans, decided on July 16 that they would not to support Rockefeller because he did not accord with their position on family values. Undeterred, Rockefeller soldiered on and on September 16 he announced that former Gov. Hugh Gregg of New Hampshire was on his team to help direct his efforts in the first primary in New Hampshire.

Other contenders for the Republican presidential nomination included Senator Barry Goldwater, as well as United States Ambassador to South Vietnam and 1960 Republican vice-presidential candidate Henry Cabot Lodge Jr. Also considering a run for the presidency were Governors George Romney of Michigan and William Scranton of Pennsylvania. Unofficial Goldwater headquarters were opened in critical states by mid-1963. He opened an office in Oregon on June 20, and by the summer of 1963 he was doing well in the polls among Republicans.

Opposition to Goldwater began to gather in the east. The New York Times reported on July 7 that there was a movement in the northeast for "favorite sons" to run in state primaries to prevent a Goldwater nomination. A conference of western Republicans was held in Eugene, Oregon on October 12, 1963 at which both Rockefeller and Goldwater attended. Rockefeller challenged Goldwater to a debate and chose the subject of "how our party can best deal with the vital issues before the American people today." Goldwater refused to debate Rockefeller, stating that he believed it would tarnish the party's unity.

Soon after, Rockefeller began campaigning in New Hampshire, spening two days there visiting with local Republicans and answering the question how he would govern differently from President Kennedy. The following week, Henry Cabot Lodge announced that he would not be running in the New Hampshire primary. This was seen as a blow to Goldwater because he had been counting on a split in the moderate vote. Rockefeller was now able to consolidate moderate Republicans against Goldwater. On November 7, Rockefeller became the first candidate to officially enter the race.

The assassination of President Kennedy on November 22 shocked the nation and drew attention away from politicking. Goldwater was attending the funeral of his mother-in-law when he heard the news. Governors Rockefeller and Scranton announced a one-month period of mourning and agreed to cease campaigning. But discussions took place behind the scenes as moderates considered whether the electoral map was conducive for a Goldwater victory. On December 7, former President Dwight Eisenhower called on Henry Cabot Lodge to enter the race as a compromise candidate.

As 1964 opened, Goldwater formally announced his candidacy on January 3. The following day, Lodge once again renounced the efforts to draft him. Former Vice-President Richard Nixon was still mentioned as a possible candidate along with Scranton and Romney. Former Minnesota Governor Harold Stassen entered the race on January 20. He had run for the nomination three times previously (in 1944, 1948 and 1952) but was never a factor in this race. One candidate of note was Maine Senator Margaret Chase Smith, who became the first woman who held a senate seat to run for president. She also believed that her proximity to New Hampshire might giver her campaign some momentum, but this did not take place.

The first test for the candidates came in the New Hampshire primary. A poll taken a few weeks before the primary showed that 60% of the Republicans had not yet made up their minds. Even though primaries were not regarded as importantly as they are today, everyone in the party still viewed this as an important test. Goldwater's staff wanted him to soft-pedal his right-wing philosophy, but controlling a candidate like the strong-willed Goldwater was difficult. He stated that he wanted to use a newly revealed spy plane for reconnaissance over the Soviet Union. But he also denied rumors that he would abolish the recently passed Social Security program.

Goldwater spent twenty-one days campaigning continuously in New Hampshire. He left the state on March 7, confidently telling his campaign staff, "I have it made." For part of that time, he campaigned while wearing a cast. Goldwater had recent surgery on his right foot to remove a calcium spur. He felt optimistic because moderate Republicans were divided three ways, between Rockefeller as well as write-in efforts for Lodge and Nixon. The movement for Lodge received a boost the day before primary voting when it was announced that Lodge did not have his name removed from the Oregon primary ballot. This encouraged moderate Republicans unwilling to park their vote with Rockefeller.

On election day, Republican primary voters turned out in what was then a record number, in spite of cold weather which included snow and sleet. Despite not being on the ballot, Lodge won a solid victory with 36% of the vote, compared to 22% for Goldwater, 21% for Rockefeller, and 17% for Nixon. A solid slate of delegates from the state were now pledged to Lodge.

In the four-week gap after New Hampshire, Goldwater and Rockefeller both worked on trying to win endorsements in various states. Both worked on building their volunteer organizations in California, where the two were scheduled to appear on the ballot in the primary on June 2. The Field Research Associates released a poll showing Lodge in the lead in the state with 31% to 25% for Goldwater, 21% for Nixon, and just 12% for Rockefeller. Upon hearing the poll results, Goldwater said that Lodge would not do what was needed to win the nomination, and if chosen he would not work hard enough to win the election. Soon thereafter, both Gallup and Harris released polls showing Lodge as the front-runner with Nixon second and Goldwater a poor third. 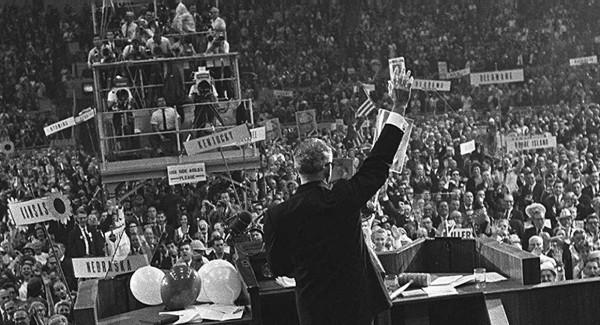 Goldwater's campaign was able to recover subsequently with victories in Illinois, Texas, Indiana and Nebraska. A victory in California resulted in an acrimonious convention win, and later, a disastrous showing on election day. As for Lodge, who was still US Ambassador to South Vietnam, Goldwater's prediction was correct. Lodge's entire campaign was organized by a small band of political amateurs working independently of their candidate. Lodge himself believed that he had little hope of winning any delegates, and did virtually nothing to aid their efforts. After early victories in New Jersey and in his home state of Massachusetts, his campaign petered out. His supporters joined Rockefeller in an unsuccessful campaign in California that might have been otherwise, if not for the fact that "the other woman" that Rockefeller had left his wife to marry, gave birth to their first child together as the vote in California approached, souring many Republicans on Rockefeller.
Collapse