In just six year, Barack Obama went from being a state politician to President of the United States. He distinguished himself from other politicians as an early opponent of the George W. Bush administration's 2003 invasion of Iraq. On October 2, 2002, the same day that President Bush and Congress agreed on the joint resolution authorizing the Iraq War, Obama addressed the first major anti-Iraq War rally and spoke out against the war. At another anti-war rally in March 2003 he told the crowd "it's not too late" to stop the war. Obama parlayed his being ahead of the curve in his opposition to the war into an an unexpected landslide win in Illinois' March 2004 primary election. His victory led to the reissue of his memoir, Dreams from My Father. Then in July 2004, Obama delivered the keynote address at the 2004 Democratic National Convention. His speech was seen by nine million viewers and was very well received. It elevated his status within the Democratic Party and made him a rising star. 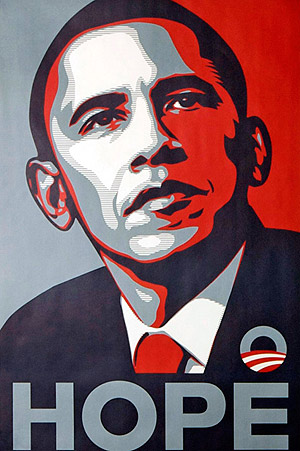 In the November 2004 general election, Obama won his election to the US Senate with 70% of the vote. In the 2006 midterm elections, the Democrats regained majorities in both houses of the U.S. Congress. Even before any candidate announced a run for president, early polls had Senators Hillary Clinton and Barack Obama as the most popular potential Democratic candidates. Several other potential Democratic candidates included former Presidential candidates Al Gore, the runner-up in the 2000 election and John Kerry, the runner-up in the 2004 election. Other potential candidates were John Edwards, Kerry's running mate in 2004; Delaware Senator Joe Biden; New Mexico Governor Bill Richardson; Iowa Governor Tom Vilsack; Connecticut Senator Chris Dodd, and Indiana Senator Evan Bayh.

Edwards was the first of these to formally announce his candidacy for the presidency, on December 28, 2006. It was his second attempt at the presidency. Hillary Clinton announced her intention to run in the Democratic primaries on January 20, 2007 and Obama announced his candidacy on February 10 in his home state of Illinois. Early in the year, support for Obama rose in the polls and he led Clinton in Iowa polling as the Iowa caucuses approached. Obama ended up winning the caucus in that state, with John Edwards coming in second and Clinton in third. His win was the result of the support of a lot of first time caucus-goers and independents. According to polling, voters saw him as the "candidate of change." Obama's victory in Iowa gave Obama's campaign considerable momentum, so much so that after the Iowa caucus, Joe Biden and Christopher Dodd withdrew from the nomination contest.

Following his victory in Iowa, Obama became perceived as the new front runner in New Hampshire. His poll numbers skyrocketed after his Iowa victory. Conversely, the Clinton campaign was struggling after a huge loss in Iowa. Her campaign strategy had assumed early victory in both states, and the former first lady had anticipated wrapping up the Democratic presidential nomination by Super Tuesday on Feb. 5.

Clinton is considered to have rescued her failing campaign, for the time being, thanks to a strong performance at the Saint Anselm College, ABC, and Facebook debates several days before the New Hampshire primary. She gave an emotional television interview just ahead of the January 8, 2008 primary vote. New Hampshire hosted the first primary in the entire nation. A state law that was passed in 1975 required that the date be set at least one week before any other similar contest. The Iowa caucuses are the only delegate-choosing event before the New Hampshire primary, but since Iowa hosts caucuses, not primaries, that is not seen as violating the law.

The primary system in the state permitted any registered voter to participate in New Hampshire's primary. Voters were required to declare a party affiliation so that they could participate in only one primary, not both the Democratic and Republican primaries. The voters elected delegates to the district-level events, but a candidate only receives delegates to the national convention if he or she receives at least 15% of the district voters' votes. The battle was over 30 delegates, to be proportionally sent to the national convention, but the early timing of the primary gave it a disproportionate significance for the momentum that it could give to the winning campaign.

Obama hoped that he would win the New Hampshire primary in the same way he defeated Hillary Clinton at the Iowa caucuses. Since his victory in Iowa, he has attracted more supporters, while Clinton was struggling to overcome setbacks after she finished in third place at the caucuses in Iowa. A series of pre-primary polls showed that Obama enjoyed a significant lead. Clinton was in second place, and John Edwards third. Average polling during the period of January 5 to January 7, 2008 by Real Clear Politics showed Obama's support at 38.3%, Clinton at 30.0%, Edwards at 18.3%, and Richardson at 5.7%. A USA Today/Gallup poll indicated that Barack Obama enjoyed a 13-point lead over Hillary Clinton. This was a considerable change from December 2007, when Clinton was leading in the polls with 47%, and Obama had 26%.

Several weeks before the primary, on November 30, 2007, a man identified as 47-year old Leeland Eisenberg entered a Clinton presidential campaign office in Rochester, New Hampshire, armed with road flares strapped to his chest. He claimed this was a bomb. He took five people from the campaign office hostage and asked for Clinton. Two of the hostages were released early on, a woman and her infant child. Other hostages were later released and the standoff ended with Eisenberg's surrender about five hours after the incident began. At the time Clinton was in the Washington D.C. area, scheduled to speak at a Democratic National Committee meeting in Vienna, Virginia. When she learned of the incident, she canceled her appearances at public events for the remainder of the day and that evening she flew to Rochester in order to meet with and comfort the hostages. She praise the local law enforcement officials who handled the situation.

Despite the fact that Clinton had fallen behind Obama by 13 points in the week prior to the New Hampshire primary, she rebounded to get more votes than Obama in the New Hampshire primary. She ultimately led the primaries by 3 percent. According to exit polls, female voters and elderly voters helped her achieve victory. Whereas in the Iowa caucuses, Obama received 35 percent of the female vote, while Clinton only received 30 percent. But in New Hampshire, 45 percent of women supported Clinton, compared to 36 percent for Obama. Clinton's win was the first time a woman had ever won a major American party's presidential primary for the purposes of delegate selection.

Nearly 288,000 people turned up to vote in the Democratic Primary, even higher than expected, and more than the number of New Hampshire residents who voted for Al Gore in the 2000 presidential election. Clinton received 112,404 votes or 39.09%. Obama finished second with 104,815 votes or 36.45%. Both ended up winning 9 delegates, but Clinton won bragging rights for finishing in first place. John Edwards finished in third place (with 48,699 votes or 16.94%) followed by Bill Richardson in fourth (with 13,239 votes or 4.6%). At her address to New Hampshire after the primary, her supporters called her the "comeback kid", a nickname her husband had used for himself 16 years earlier in 1992. Bill Richardson withdrew from the race after the New Hampshire primary. He returned to his home state, New Mexico, on

New Hampshire voters cast their votes on Diebold optical-scan systems, a system said to be vulnerable to tampering. Election-reform activists claimied to find evidence suggesting fraud in the voting. On January 10, 2008, presidential candidate Dennis Kucinich requested and paid for a recount to make sure that all of the votes in the Democratic primary were counted. Kucinich cited concerns about the difference between pre-primary polls which showed that Obama would win, while Clinton won in the actual election. Kucinich cited reports that alleged disparities between hand-counted ballots, which tended to favor Obama, and machine-counted ones, which seemed to favor Clinton. 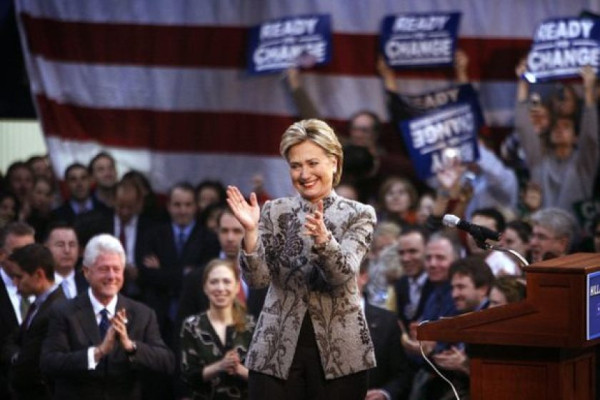 The recount began on January 16, 2008 after New Hampshire Secretary of State Bill Gardner received $27,000 from Kucinich for the cost of the recount. The first ballots to be counted came from Manchester. The campaigns and fair elections groups had the right to see and approve every ballot. Vote count changes were made in places where voters did not follow directions and marked ballots that were impossible for the machines to read. The error rate was less than 1%. Due to insufficient funding, the recount was halted on January 23, 2008.

After a long primary season, Obama clinched the Democratic nomination in June 2008. Obama campaigned on the theme of Hope and Change while his Republican opponent, Senator John McCain of Arizona, emphasized his experience. The campaign was strongly affected by the onset of a major financial crisis, which peaked in September 2008. Obama won a decisive victory over McCain, winning the Electoral College and the popular vote by a sizable margin. He did so despite finishing second in the New Hampshire Primary.
Collapse