If you ask most people who won the 1992 New Hampshire Democratic primary, their answer would be Bill Clinton, who dubbed himself "the Comeback Kid" on the night of the vote. But Clinton finished in second place. So who won the primary? 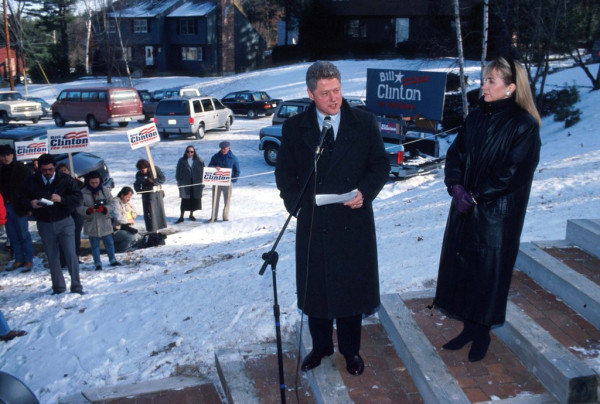 The election of 1992 was expected to be a cake walk for incumbent President George H. W. Bush. After the successful performance by U.S. and coalition forces in the Persian Gulf War, President Bush's approval ratings were 89%. His re-election was considered to be a slam dunk. As a result, several high-profile potential Democratic Party candidates opted not to run for the nomination. These included New York Governor Mario Cuomo, and the Reverend Jesse Jackson. Another high profile Democrat, Senator Al Gore, also decided not to seek the nomination. His six year old son Albert had been struck by a car on April 3, 1989 and was undergoing extensive surgery and physical therapy.

Clinton's profile was soon elevated as a result of negative publicity. A woman named Gennifer Flowers appeared in the press to reveal allegations that she had an affair with Clinton. Clinton appeared on the news program 60 Minutes with his wife, Hillary Clinton, following Super Bowl XXVI, to rebuff these allegations. In 1992, like today, the Iowa caucus was the first contest of the 1992 Democratic primaries. The Iowa Caucus was not contested because Iowa Senator Tom Harkin had the home field advantage in the race. The other candidates did not campaign in Iowa, instead conceding the contest to Harkin.

On January 19, The Boston Globe published a poll showing Clinton ahead of the field with 29%, Paul Tsongas with 17%, and Bob Kerrey 16%. But Clinton's campaign took a hit when reports of the extramarital affair between Clinton and Flowers surfaced. Clinton fell far behind Tsongas in the New Hampshire polls. To control the damage from these allegations, Clinton and his wife Hillary went on 60 Minutes following the Super Bowl to deny the charges. The Clinton campaign also faced further attacks which alleged that Clinton had dodged the draft during the Vietnam War.

Clinton was also criticized for his strong support of capital punishment. During the campaign he he flew home to Arkansas to affirm that the execution of Ricky Ray Rector, convicted murderer of a man in a restaurant and a police officer who attempted to negotiate his surrender. Clinton's critics from the anti-capital punishment sector cited this as an unpleasant example of Clinton's opportunism. Christopher Hitchens, in his book on Clinton called No One Left to Lie To, was critical of Clinton for taking political advantage of Rector's execution, which he cited as an attempt to draw focus off of the ongoing Gennifer Flowers sex scandal. Later, testify during the Paula Jones lawsuit, Clinton admitted that he did have a sexual encounter with Flowers in 1977.

The story that caused Clinton greater damage, however, was the notion that he had 'dodged the draft' in order to avoid military service in the Vietnam War. After the draft story broke, Clinton lost nearly twenty points in his polling numbers in less than a week. Clinton faced more bad publicity when he was accused of smoking marijuana while in college in England. His famous response was "I only tried it once and never actually inhaled." 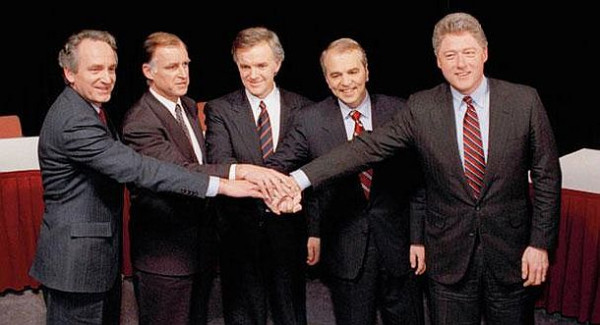 The primary was held February 18, 1992. Paul Tsongas won the New Hampshire primary with Clinton finishing a close second within single digits of Tsongas, despite trailing badly in the polls. Tsongas had been expected to win the primary because of the proximity of New Hampshire to his home state of Massachusetts. Because of his close second place, the media viewed the results as a victory for Clinton. On election night, Clinton labeled himself "The Comeback Kid". He left New Hampshire with an increase in momentum in the remaining primaries and went on to win a total of 37 primaries and caucuses and eventually winning the nomination.

Clinton became the first president elected despite not winning the New Hampshire primary, a feat since duplicated by George W. Bush in 2000 and Barack Obama in 2008.
Collapse