As the 1980 presidential election approached, the Republican Party sensed that the time was right for taking back the Presidency. Incumbent Democratic president Jimmy Carter had low popularity ratings, as the nation faced high gas prices, high mortgage rates, inflation without growth, a renewed Cold War with the Soviet Union following the invasion of Afghanistan, and the Iran hostage crisis. Carter's job approval rating sank to below 20 percent in late-1979 as a result. Carter faced primary challenges within his own party from Massachusetts Senator Ted Kennedy and California Governor Jerry Brown. A large field of Republican challengers also emerged. 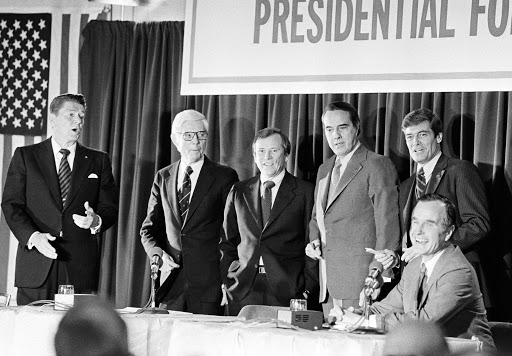 Ronald Reagan had narrowly lost the 1976 Republican nomination to President Gerald Ford. Now he, was the early front runner to win the Republican Party nomination for President in 1980. He was so far ahead in the polls that campaign director John Sears decided on a strategy of playing it safe and avoiding many of the multi-candidate forums and straw polls in the summer and fall of 1979.

George H. W. Bush, the former Congressman, director of the Central Intelligence Agency and chairman of the Republican National Committee, did go to all the so-called "cattle calls". His campaign attracted attention from his coming in first at a number of these events. In January 1980, the Iowa Republicans decided to have a straw poll as a part of their caucuses for that year. Bush defeated Reagan by a small margin. He also won the Puerto Rico primary, a race that Reagan declined to enter. Bush declared he had "the Big Mo", referring to momentum. In the thirty-five days between the Iowa caucuses and the New Hampshire primary, it began to look as if Reagan’s third try for the Republican nomination might end in failure.His campaign’s internal polling showed Reagan falling 21 points behind Bush in New Hampshire. If Reagan lost to Bush in New Hampshire, he believed that his campaign might be over.

Sears and his aides Jim Lake and Charlie Black had felt that there was no way that Bush could defeat. Reagan his foot down and told Sears that he did not like the "play it safe" campaign. He planned to go to every part of New Hampshire, speak his mind on issues, and participate in the debates. He announced that he would attend all debates in New Hampshire.

Bush in turn wanted to pursue a strategy in which he could face Reagan in a one-on-one showdown. The Nashua Telegraph gave him the very opportunity he wanted when they stepped forward to sponsor a one-on-one debate. But a problem soon arose when the Federal Election Commission ruled that the newspaper couldn’t sponsor a debate that excluded some GOP candidates. To get around this problem, the Reagan campaign agreed to foot the entire bill for the debate. It was held in the Nashua High School gymnasium on Saturday, February 23, just three days before the primary.

Irate at being excluded, the other Republican candidates fired off telegrams to Reagan, stating that fairness demanded their inclusion. Reagan considered including other candidates, but just one day before the debate, Reagan’s New Hampshire campaign director, Gerald Carmen, confirmed that Reagan and Bush would be the only two candidates at the debate.

John Sears came up with a plan to have Reagan relent at the last minute and invite the other candidates to participate. The idea was that this would allow Reagan to appear magnanimous, and embarrass Bush. The other Republican candidates — Senators Bob Dole and Howard Baker, Congressmen Phil Crane and John Anderson, and former Texas governor John Connally, would be invited onto the stage.

On the morning of the debate, Jim Lake got Reagan’s approval on the change in plans. Around noon, Sears called the other candidates, but the only one who could not make it in time was John Connally. Connally was aware that Sears planned to use him for Reagan's benefit. He told Lake, “Brilliant strategy, but I ain’t coming. F– him over once for me.” At 2 p.m., Sears publicly announced that Reagan wanted to open up the debate to the other candidates. As Sears had hoped, Bush took the bait. He immediately refused to include the others, saying that he’d been invited by the Telegraph to participate in a two-man debate and that he “played by the rules.”

At 2:30 Lake had called Telegraph executive editor Jon Breen to notify him that Reagan had decided to include the other candidates, claiming that he was under enormous pressure from the other candidates. Breen became angry when he found out that the other candidates had already been invited to his debate and he hadn’t even been consulted. Angry at the last-minute switch, Breen and his Telegraph colleagues decided that it was their debate and they would stick with the one-on-one format.

That evening, about 2,400 people attended at the Nashua High School gymnasium. Tensions mounted as time passed but the debate did not start. It was scheduled to begin at 7:30, but at 8:15 there were still no candidates to be found. When an advance man kept asking Reagan aide Paul Russo how many chairs should he put on the stage, two or six, Russo was unsure. Reagan arrived and told Sears sternly, “I want to talk to George Bush.” Paul Laxalt, Reagan’s national campaign chairman, persuaded Reagan to send Senator Gordon Humphrey as his emissary. Humphrey told Bush campaign manager Jim Baker, “I have a message for Mr. Bush that the one-on-one debate is not gonna happen” unless Bush agreed to let the others be included. Baker stepped away to consult with Bush, and came back a moment later to say the answer was still no. When this was reported back to Reagan, who was now standing with the other four candidates, he stormed, “Dammit, this is unbelievable! I’m going to get you all in there!”

When Bush came out of his holding room and headed to the stage, Humphrey pleaded to include the others in the name of “party unity.” Bush told Humphrey, “I’ve done more for party unity than you’ll ever know!”

Reagan tapped his microphone and asked Breen if he could address the crowd. Breen tersely replied, “No.” Reagan spoke anyway. He began to tell the crowd that he felt it was in the interest of fairness that all the candidates be included. He looked at Bush, but Bush just stared ahead, refusing to meet Reagan’s gaze. Breen interrupted Reagan as the crowd booed and hissed at Breen again. Talking over Reagan, Breen ordered Reagan’s microphone turned off, but the technician ignored him. Breen ordered the technician a second time to turn off Reagan’s microphone, and again he ignored Breen. An angry Reagan famously turned to Breen and firmly told him, “I am paying for this microphone, Mr. Green!” The crowd went wild. Even the other four candidates forcefully applauded Reagan. Reagan called the editor “Green” instead of “Breen,” but no one appeared to notice.

Breen sternly said to Reagan, saying, “Are you through? Have you concluded your remarks?” Bush sat silently at the debate table, staring straight ahead. After several unpleasantries hurled at Bush and compliments for Reagan, the excluded candidates agreed to leave the stage. Bush got his two-man debate. The four other candidates, dubbed the “Nashua Four” by the media, retired to the school’s Band Room, where they were met by a mob of media and joyously bashed Bush. Bush “wants to be king,” Dole said. “I told him onstage there’ll be another day.”

The event was not been televised live, but the networks and local news ran footage of an emotionless Bush and an angry Reagan. Three days later, Ronald Reagan won the New Hampshire primary by a lopsided margin of 50 to 23 percent. Here is the video of that incident.