I sometimes wonder if on mornings like today, the state of Iowa lets out a collective sigh of relief and says to itself, "thank God that's over." The state must resemble a ghost town as presidential candidates and their entourages pack up and head east on the road to New Hampshire. True to its "first in the nation" status, the 2020 Iowa Democratic caucuses took place in Iowa yesterday (Monday, February 3, 2020), the first nominating contest in the Democratic Party presidential primaries for the 2020 presidential election. The Iowa caucuses are a closed caucus, with Iowa awarding 49 delegates for this summer's nominating convention. Of these, 41 are pledged delegates allocated on the basis of the results of the caucuses. 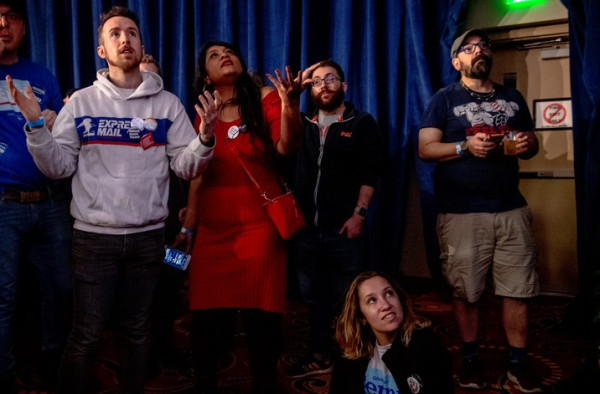 But unlike in other election years, the big story was not who won or lost, at least not yet. The real news comes from the absence of any official results. The release of Iowa caucus results have been delayed after inconsistencies in the reporting of data. Results have been promised later today. A Democratic Party spokesperson has said that the failure is not the result of a hack or other breach of cybersecurity.

Representatives for the candidates were briefed by the Iowa Democratic Party. Iowa Democratic Party Communications Director Mandy McClure told reporters, “We found inconsistencies in the reporting of three sets of results. In addition to the tech systems being used to tabulate results, we are also using photos of results and a paper trail to validate that all results match and ensure that we have confidence and accuracy in the numbers we report. This is simply a reporting issue, the app did not go down and this is not a hack or an intrusion. The underlying data and paper trail is sound and will simply take time to further report the results.”

A number of candidates have claimed victory, with Buttigieg giving perhaps the most upbeat campaign speech. Biden appears to have received the most disappointing results, but this won't be confirmed until the results are released. The fiasco has been seen to be a black eye for the Democratic Party organization in Iowa, with commentators from CNN and other sources speculating that this may cost Iowa its status as "first in the nation" in future elections.

But for this issue, the caucuses generally represent democracy in action. Absentee voting or proxy voting was not allowed in the closed 2020 Iowa Democratic caucuses. Only Iowans who are registered as members of the Democratic Party (and must be a minimum of 18 years old by November 3, 2020) were permitted to vote. These voters were required to be physically presence at their designated precinct caucus site. Iowans who did not register as Democrats before the caucus day were still allowed to register as Democrats on caucus night itself at their designated precinct, and if they did so, they could vote in the caucus. There were a total of 1,678 Iowa precinct caucuses plus 99 satellite caucuses (located at various locations around the world for registered Democratic Iowans who are prevented from voting locally at their precinct caucus). Doors were closed at 7 p.m. CST last night. Those present were able to elect precinct delegates for the subsequent county conventions and allocate the state's 41 pledged national delegates based upon the proportional accumulative result of all the precincts.

Before a candidate could qualify as a viable candidate in any precinct caucuses, the candidates had to meet a viability threshold within the individual precinct in order. These qualifications were:

11,402 county convention delegates were awarded proportionally on the basis of the results of the 1678 precinct caucuses and 99 sattelite caucuses. They will go to their local county convention on March 21, 2020, to choose 2,107 District and State Delegates (SDE) for the district conventions on April 25 and the state Democratic convention on June 13. A total of 41 pledged delegates will then be elected for the 2020 Democratic National Convention. Unlike in 2016, this year the computed final number of pledged national delegates will be locked to the candidates already when the result of the precinct caucuses are known.

The 41 pledged delegates Iowa sends to the national convention will be joined by eight unpledged delegates. These are five members of the Democratic National Committee (DNC) and three members of Congress, of which all three are U.S. Representatives. 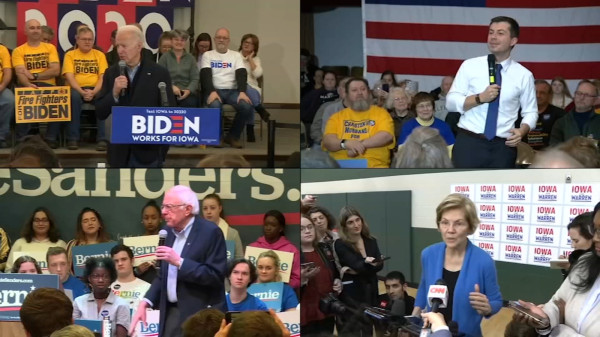 Polling in the last week showed Bernie Sanders leading in the polls with a polling average of 23.6%. He was followed by Joe Biden (at 19.7%), Pete Buttigieg (at 15.8%), Elizabeth Warren (at 15.1%), Amy Klobuchar (at 10.0%), Andrew Yang (at 4.0%) and Tom Steyer (at 3.5%). Of the remainder, 2.6% scattered their support among other candidates) and an 5.8% reported as undecided. From the reports coming out of some of the campaigns, it sounds as if Biden did worse than expected and Warren and Buttigieg did better. But is this fact or spin? It remains to be seen if the results, when released, match the polling or the speculation or neither. Stay tuned.
Collapse