he 1976 campaign featured what was at the time a record number of state primaries and caucuses. It is recognized as the first presidential campaign in which the primary system was dominant. As with a lot of change, many failed to appreciate the significance of this change or learned how to capitalize on it, and this included most of the Democratic candidates who had their eyes on the preidency that year. Specifically, many of those candidates failed to realize the significance of the increased number of primaries when it came to presenting the appearance of having vast public support, gathering momentum in the nomination contest, and of course in gathering up delegates for the nominating convention. 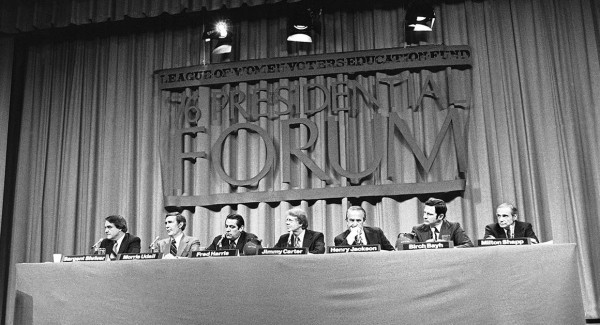 In 1976 a lot of Democrats had their eyes on the White House. They were certain that this was their year to take back the Presidency. The incumbent Republicans were unpopular for a number of very significant reasons: the Watergate scandal and the subsequent resignation of Richard Nixon, the humiliating American withdrawal of troops from Vietnam, the economic recession of 1974-75, all had Americans in a mood for change. President Gerald Ford had squandered his early popularity with an unconditional pardon of Richard Nixon. He was seen to be incapable of handling the recession, and by late 1975 had slumped badly in national polls. Even the presence of bicentennial year celebrations did not help him recover from these problems.

Despite all of the political tea leaves appearing to be in the Democrats' favor, the party seemed to lack a clear front-runner for the nomination. This was due in large measure to a lack of trust of beltway politicians. The lack of an apparent consequence for Nixon other than his resignation, and especially his pardon, led many to believe that politicians looked after one another and could not be trusted. The level of trust Americans had for those in Congress dropped significantly and has never been recovered.

Carter was a longshot, and was not as well known as many of the others. But in 1976 not being a well-known politician was not the liability that it might be in other years. Carter was the one candidate who did see the opportunities in the new nominating system. Carter was a former state senator as well as a former Governor of Georgia, and the one thing he understood well was small state politics. Carter was virtually unknown at the national level. There was no way that he would have ever won the Democratic nomination under the old, boss-dominated nominating system. But he was the right man for the time. Public disgust with political corruption following Nixon's resignation was a significant factor for voters and Carter realized that his obscurity and "fresh face" could be an asset in the primaries.

Carter's plan was to run in all of the primaries and caucuses, beginning with the Iowa caucuses. He wanted to gain prominence and build up momentum by winning "somewhere" each time primary elections were held. All of that began in Carter startled many political experts by finishing second in the Iowa caucuses. He finished first among the candidates who ran in the caucuses, but indicative of the mistrust that existed at the time, he finished second behind "uncommitted" delegates. The results were as follows:

Udall had been leading in the polls at one point, and the loss was a blow to his campaign. Harris tried to usurp the role of victorious underdog. He had briefly been a contender for his party's nomination in 1972, but dropped out of the race a few months before the first primaries. He was one of four Democratic presidential contenders that year identified as being of the liberal wing of the Democratic Party. (The others were Udall, Bayh, and Shriver - father of future First Lady of California Maria Shriver). Carter was considered to be the principal moderate-to-conservative among the leading 1976 Democratic nomination candidates.

Carter followed up on this momentum with a win in the New Hampshire primary on February 24, which in 1976 took place more than a month after Iowa's caucuses. Harris would end up finishing a disappointing 4th behind Carter. Udall would resurrect his candidacy with a strong second-place showing only 5 percentage points behind the winner. For Harris, on Tuesday March 2, 1976, he finished 5th in Massachusetts and, on that very same day, finished 3rd in an Advisory Primary in Vermont. From that point on, Harris was a non-factor in the 1976 race.

Carter's victory in the New Hampshire primary proved that a Southerner could win in the North. He then proceeded to slowly but steadily accumulate delegates in primaries around the nation and knocked his key rivals out of the race one by one. He defeated former Alabama Governor George Wallace in the North Carolina primary March 23, eliminating his main rival in the South. He defeated Washington Senator Henry "Scoop" Jackson in Pennsylvania April 27, and Jackson quit the race. In the Wisconsin primary on April 6, Carter scored an impressive come-from-behind victory over Mo Udall, and eliminated Udall as a serious contender.

Idaho Senator Frank Church and California Governor Jerry Brown announced their candidacies for the Democratic nomination and defeated Carter in several late primaries. But their campaigns started too late to prevent Carter from gathering the remaining delegates he needed to capture the nomination. The 1976 Democratic National Convention was held in New York City. By the time the convention opened Carter had more than enough delegates to win the nomination, and the major emphasis at the convention was to create an appearance of party unity, something which had been sorely lacking in the 1968 and 1972 Democratic Conventions. Carter easily won the nomination on the first ballot he then chose Senator Walter Mondale of Minnesota, a liberal and a protege of Hubert Humphrey, as his running mate. In a race that was closer than many expected, Carter went on to defeat Ford and recapture the White House for the Democratic Party.
Collapse