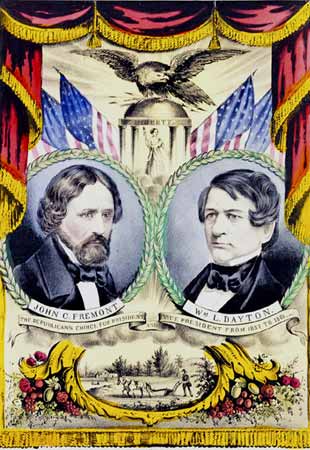 The first Republican National Convention was held in the Musical Fund Hall in Philadelphia, Pennsylvania, from June 17 to 19, 1856. The convention approved an anti-slavery platform that called for congressional governance in the territories, an end to polygamy in Mormon settlements, and federal funding for a transcontinental railroad.

A number of prominent men emerged as leaders in the party. They included General John C. Frémont, Judge John McLean, William Seward, Salmon Chase, and Charles Sumner. Each of these men were considered by those at the convention to be presidential timber. When the convention convened, Seward, Chase and Sumner all requested that their names be withdrawn from consideration. McLean's name was initially withdrawn by his manager Rufus Spalding, but he rescinded the withdrawal at the strong urging of the Pennsylvania delegation led by Thaddeus Stevens.

A year previously, on June 19, 1855, a small gathering of like-minded individuals had met in Washington, D.C. They passed a resolution that was critical of "all compromises, real or imaginary" arising out of the opening of Kansas Territory and Nebraska Territory to the possible institution of slavery. They called themselves the "Republican Association of Washington, District of Columbia" and they passed a four plank platform. It led with the statement that "There should be neither slavery nor involuntary servitude, except for the punishment of crime, in any of the Territories of the United States." A number of state organizations soon followed suit, and the Republican Party was created.

On January 17, 1856, representatives of Republican Party organizations in Ohio, Massachusetts, Pennsylvania, Vermont, and Wisconsin issued a joint call for a convention to be held in Pittsburgh, Pennsylvania, on February 22, 1856. This first convention was convened to create a national organization and to call a formal, properly delegated national convention to nominate candidates for President and Vice-President of the United States in the November 1856 election. At the first gathering, these new Republicans elected a governing National Executive Committee and passed various resolutions calling for the repeal of laws permitting slaveholding in free territories. They also called for resistance "by Constitutional means of Slavery in any Territory," defense of anti-slavery supporters in Kansas whose safety was at risk, and a call to "resist and overthrow the present National Administration of Franklin Pierce, as it is identified with the progress of the Slave power to national supremacy."

The 22-member Republican National Committee included one representative from each state attending the Pittsburgh Convention. They met in a plenary session on March 27, 1856, at the Willard Hotel in Washington, DC. They also called for a formal presidential nominating convention. The convention was set to begin in June in Philadelphia. Each state organization was to be allocated six at-large delegates, plus three delegates for each congressional district.

Another party from the North called the American Party nominated former President Millard Fillmore in Philadelphia. This party called for its national convention to be held in New York, New York, just before the Republican National Convention. Party leaders hoped to nominate a joint ticket with the Republicans. The Republica national convention was held on June 12 to 20, 1856 in New York. General John C. Frémont was the favorite to attain the Republican nomination. Many in the American party hoped to nominate Fremont as their candidate, but Fremont supporters were concerned that doing so would injure his chances to actually become the Republican nominee. The delegates voted repeatedly on a nominee for president without a result. Nathaniel P. Banks was nominated for president on the 10th ballot, with the understanding that he would withdraw from the race and endorse John C. Frémont once he had won the Republican nomination. T

The first Republican National Convention was held in the Musical Fund Hall in Philadelphia, Pennsylvania, on June 17 to 19, 1856. The convention approved an anti-slavery platform that called for congressional sovereignty in the territories, an end to polygamy in Mormon settlements, and federal assistance for a transcontinental railroad. William Seward, Salmon Chase, and Charles Sumner requested that their names be withdrawn from nomination. John McLean's name was initially withdrawn by his manager Rufus Spalding, but the withdrawal was rescinded at the urging of the Pennsylvania delegation led by Thaddeus Stevens. Frémont was nominated for president overwhelmingly on the first ballot, and William L. Dayton was nominated for vice-president over Abraham Lincoln.

None of the three candidates campaigned in person. The Republican Party campaigned on the slogan of "Free speech, free press, free soil, free men, Frémont and victory!" Democrats warned that a Republican victory would bring a civil war. The Republicans also accused the Pierce administration of allowing a fraudulent territorial government to be imposed upon the citizens of the Kansas Territory, leading to the violence that had raged in Bleeding Kansas. They called for the immediate admittance of Kansas as a free state.

The Democrats supported the Kansas-Nebraska Act and also supported the pro-slavery territorial legislature elected in Kansas. They opposed the free-state supporters in Kansas, and called the Topeka Constitution as an illegal document. Democrats also supported a plan to annex Cuba, and they warned that a Republican victory would lead to the secession of numerous southern states.

Millard Fillmore was considered by many voters of having no chance of winning the election on the American ticket. Former Whigs were urged to support Democratic Party candidate James Buchanan. Undaunted, Fillmore insisted that the American Party was the only "national party", accusing the Democrats favorig the South and Republicans of favoring the North and abolition. The American Party created a controversy when it began a rumor that Frémont was in a Roman Catholic. He wasn't, but his mother had been. The Democrats spread the rumor and Republicans were unable to get out the message that the statements were false. They also did not want to alienate the support of German Catholic voters, a significant block of their support. The issue persisted throughout the campaign and likely cost Frémont the support of a number of American Party members. 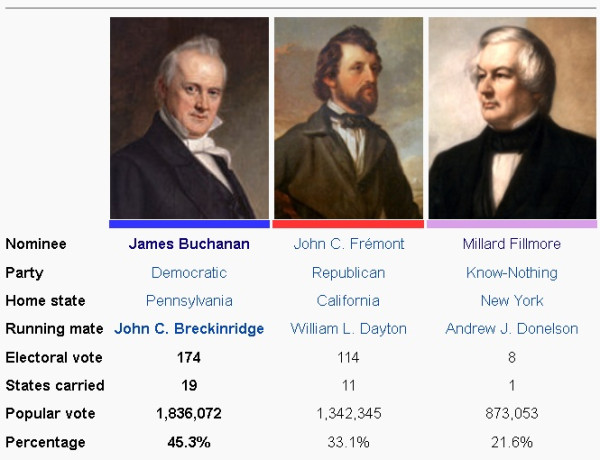 This would be the final presidential election where the American Party (also called the "Know Nothing Party") ran a national campaign. The party began to splinter. After the Supreme Court's controversial Dred Scott v. Sandford ruling in 1857, most of the anti-slavery members of the party joined the Republicans. The pro-slavery wing of the American Party remained strong on the local and state levels in a few southern states, but by the 1860 election, they were no longer a serious national political movement. Most of their remaining members either joined or supported the Constitutional Union Party in 1860.
Collapse