Henry Stanberry was Attorney-General in the cabinet of Andrew Johnson. He resigned that position to conduct Johnson's defense at Johnson's trial after the House of Representatives voted to impeach Johnson in 1868. It is quite possible that it was Stanberry's eloquence that turned the day for Johnson, since Johnson was able to avoid losing his job by only one vote, although there are other theories to explain Johnson's acquittal. 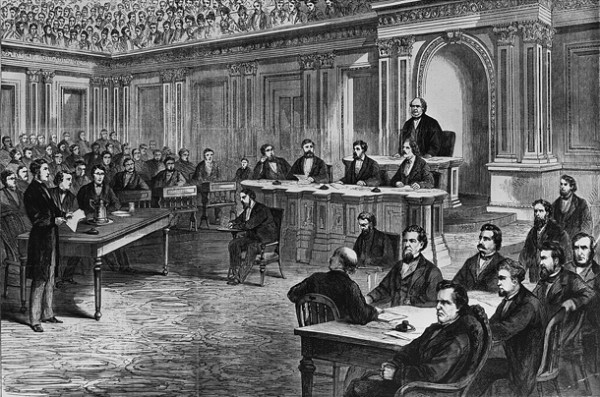 When Andrew Johnson became President, following the assassination of Abraham Lincoln in April of 1865, an obligation fell upon him to retain his predecessor's cabinet. The obligation arose in part because of the unique nature of the circumstances which resulted in Johnson becoming president, and especially in the context of the times. The national tensions which resulted from the Civil War that had recently ended and from the reverence held for Lincoln called for a steadying of the course which Lincoln had mapped out. In addition to that, Johnson, throughout his time in office, attracted mistrust from the anti-abolitionist faction of the Republican Party, known as the "Radical Republicans", who were afraid that, as a southernor, Johnson would undo much that the war and Lincoln had accomplished towards ending slavery and punishing those who divided the country in order to maintain the abhorrent institution.

On the issue of punishment of the south, it is likely that Lincoln would have maintained a benevolent approach which probably would not have made the Radicals happy. But from the measures that he was able to put in place, it appeared clear that Johnson favored the establishment of an order in the south which would have the freedmen remain as second class citizens, if they were to enjoy any of the rights of citizenship at all. For example, Johnson had no intention of providing any protection to the former slaves. He later pardoned many of the former leaders of the confederacy. Johnson implemented his own form of Reconstruction – a series of proclamations directing the seceded states to hold conventions and elections to re-form their civil governments. When Southern states returned many of their old leaders, and passed "Black Codes" to deprive the freedmen of many civil liberties, Congress refused to seat legislators from those states and passed legislation to overrule the southern actions. Johnson vetoed their bills, and Congress overrode him, setting a pattern for the remainder of his presidency. Johnson opposed the Fourteenth Amendment, which gave citizenship to African-Americans.

As the conflict between the branches of government grew, Congress passed the Tenure of Office Act, restricting Johnson in firing Cabinet officials. When he persisted in trying to dismiss Secretary of War Edwin Stanton, he was impeached by the House of Representatives, and avoided conviction in the Senate and removal from office by just one vote.

One of the cabinet members that Johnson was able to appoint was Attorney General Henry Stanbery. Lincoln's last Attorney General was his friend James Speed. Speed resigned from the Cabinet in July 1866 and resumed the practice of law because he disagreed with Johnson's approach to reconstruction. To replace Speed, Johnson appointed Stanbery, a former Attorney-General of Ohio. Stanbery was loyal to Johnson and followed his President's instructions.

Stanbery issue an opinion supporting his decision to remove Secretary of War Edwin Stanton from office. In July, 1867 Congress passed a Reconstruction Act against Johnson's position. When Johnson vetoed it, Congress overruled the veto and went home. The legislation also deprived the President of control over the Army in the South. With Congress in recess until November, Johnson decided to fire Stanton and relieve one of the military commanders, General Philip Sheridan. On August 5, the President demanded Stanton's resignation, but the secretary refused to quit with Congress out of session. Johnson then suspended him pending the next meeting of Congress as permitted under the Tenure of Office Act and General Ulysses Grant reluctantly agreed to serve as temporary replacement while continuing to lead the Army. Congress met in November and passed a resolution of impeachment against Johnson. That motion was defeated. But after Johnson notified Congress of Stanton's suspension and Grant's interim appointment, the senate voted to reinstate Stanton, contending the President had violated the Tenure of Office Act. Grant stepped aside over Johnson's objection. Johnson then dismissed Stanton and appointed Lorenzo Thomas to replace him. Stanton refused to leave his office, and on February 24, 1868, the House voted to impeached Johnson for intentionally violating the Tenure of Office Act, by a vote of 128 to 47.

Stanbery resigned as Attorney-General on March 12, 1868, in order to defend Johnson during his impeachment trial. He wasn't of as much help as he could have been because his health at the time was so fragile that most of his arguments were submitted in writing. Stanbery insisted that Johnson make no appearance at the trial, nor publicly comment about the proceedings, and except for a couple of interviews in April, he complied. Stanberry was able to mount this loyal defense of his client:

"Yes Senators, with all his faults, the President has been more sinned against than sinning. Fear not then to acquit him. The Constitution of this country is as safe in his hands from violence as it was in the hands of Washington, But if Senators you condemn him, if you strip him of the robes of office, if you degrade him to the utmost stretch of your power, mark prophesy, the strong arms of the people will be about him. They will find a way to raise him from any depths to which you may consign him, and we shall live to see him redeemed and to hear the majestic voice of the people: 'Well done faithful servant, you shall have your reward.'"

Johnson avoided losing his job by one vote. The Senate was composed of 54 members representing 27 states. The 10 former Confederate states had not yet been readmitted to representation in the Senate at the time of the trial. At its conclusion, senators voted on three of the articles of impeachment. On each occasion the vote was 35–19, with 35 senators voting guilty and 19 not guilty. As the constitutional threshold for a conviction in an impeachment trial is a two-thirds majority guilty vote (in Johnson's case 36 votes), Johnson was not convicted. He remained in office through the end of his term the following March 4, though as a lame duck without any real influence. At the conclusion of the trial, Johnson renominated Stanbery as Attorney General and also to the Supreme Court, but the Senate would not confirm him.

After Johnson's failed bids to reappoint Stanbery, the latter returned to the Cincinnati area, where he was president of the law association of that city, but never held public office again. He wrote occasionally on political questions, and sometimes made public addresses. He was regarded as an honorable member of the bar and an esteemed lawyer. He lost his sight in 1880 and died in New York City in 1881 waiting to undergo an operation to restore it. He died of acute bronchitis. 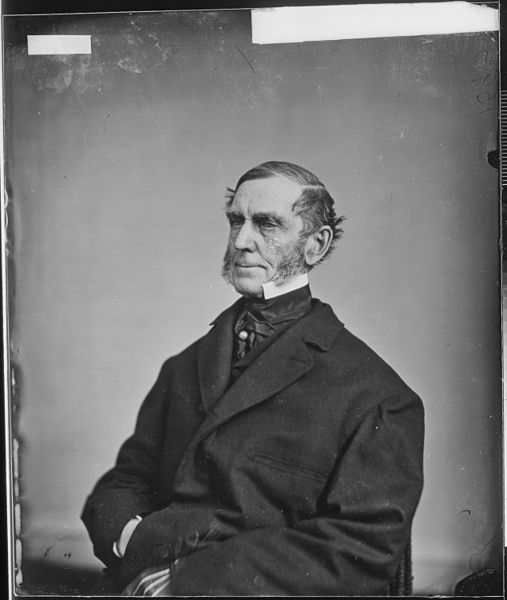 Johnson sought his party's nomination at the Democratic National Convention in New York in July 1868. While he remained very popular among Southern whites, Johnson's support was mostly from the South, and it fell away as the ballots passed. On the 22nd ballot, former New York governor Horatio Seymour was nominated, and the President received only four votes, all from Tennessee. Returning home to Tennessee after his presidency, Johnson he was elected to the Senate again in 1875 (the only former president elected to serve there), just months before his death. He spoke only in the senate, on March 22, in which he criticized President Grant for his use of federal troops in support of Louisiana's Reconstruction government. Johnson asked, "How far off is military despotism?" and concluded his speech, "may God bless this people and God save the Constitution."

Johnson returned home after the special session concluded. In late July, he planned to travel to Ohio to give speeches in the race for governor. He began the trip on July 28, and broke the journey at his daughter Mary's farm near Elizabethton, Tennessee. That evening he suffered a stroke, but refused medical treatment until the next day, when he did not improve and two doctors were sent for from Elizabethton. He suffered another stroke on the evening of July 30, and died early the following morning at the age of 66.
Collapse