The first impeachment proceedings in the United States did not center around a President or a Judge. They concerned a Senator named William Blount. William Blount was a member of the North Carolina delegation at the Constitutional Convention of 1787, who led efforts in North Carolina to ratify the Constitution in 1789. He was one of the signers of the Constitution and he later served as the only governor of the Southwest Territory, and played a leading role in helping the territory gain admission to the Union as the State of Tennessee. Blount was selected as one of Tennessee's first two U.S. senators in 1796. He was also a greedy land speculator who acquired millions of acres in Tennessee and the trans-Appalachian west. In the 1790s, he conspired with Great Britain to seize the Spanish-controlled Louisiana in hopes of boosting western land prices. When the conspiracy was uncovered in 1797, he was expelled from the Senate, and became the first federal official to face impeachment. 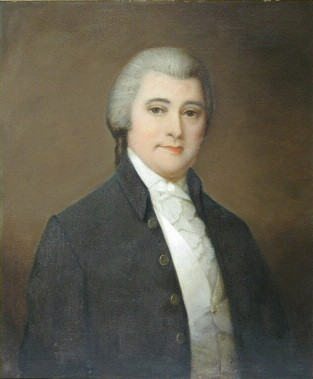 Blount was born on April 6, 1749 in Windsor, North Carolina. His father, Jacob Blount built a plantation, Blount Hall, in Pitt County, North Carolina. The elder Blount raised livestock, cotton and tobacco, produced turpentine, and operated a mill and horse racing track for the local community. His land holdings consisted of several thousand acres. In the 1770s, the Blount family joined the Patriot cause. In April 1776, William Blount was appointed a paymaster for the militia the following month. The Blounts provided provisions for the Colonial army and militias, and profited financially from the war. In December 1776, Blount was appointed paymaster of the 3rd North Carolina Regiment, and spent the early part of 1777 with the unit as it marched north to join George Washington's main forces in the defense of Philadelphia. In November 1777, political rivals in the North Carolina legislature removed Blount as paymaster, but he was restored to the office in April 1778. He helped organize regiments for the defense of Charleston. The city fell to the British in 1780 as a result of the Siege of Charleston. William's brother, Thomas, was captured in the attack. In early 1780, Blount became official commissary to General Horatio Gates, who had arrived in North Carolina to command southern colonial forces. Blount was present at Gates' defeat at the Battle of Camden in August 1780.

In May 1782, Blount was elected one of North Carolina's four delegates to the Continental Congress. He left Philadelphia in January 1783, and resigned from the Congress three months later to accept an appointment to the North Carolina House of Commons steering committee. During the House's 1783 and 1784 sessions, Blount introduced a bill known as the "Land Grab Act," which opened the state's lands west of the Appalachians to settlement. Another bill rendered soldiers with at least two years of military service eligible for land grants. Some soldiers sold their grants to the Blounts and other land speculators. In 1784, Blount sponsored a bill establishing the city of Nashville.

In June 1784, Blount sponsored another bill calling for North Carolina lands west of the Appalachians (i.e., modern Tennessee) to be ceded to the Continental Congress to satisfy the state's share of the nation's tax burden. The Act was repealed in October. Tennessee Valley residents lobbied to establish a separate state, known as the State of Franklin. Blount was elected to the Continental Congress for the 1785 session. In 1787, he was a candidate for president of the Congress, but lost to Arthur St. Clair.

In March 1787, Blount was chosen as one of five delegates to represent North Carolina at the Constitutional Convention in Philadelphia. Blount returned home to campaign for ratification of the Constitution and after its ratification he ran for one of North Carolina's inaugural U.S. Senate seats in November 1789, but was defeated by Benjamin Hawkins.

On April 2, 1790. In May, the Southwest Territory was created and on June 8, President George Washington appointed Blount governor of the new territory. Blount visited Washington at Mount Vernon on September 18, and in October 1790, he set up a temporary capital at William Cobb's house, Rocky Mount, in what is now Piney Flats, Tennessee, and began organizing a government for the new territory. Throughout his term as governor, Blount negotiated the Treaty of Holston with Cherokee leader John Watts and several other chiefs in June of 1791, resolving land claims south of the French Broad and obtaining permission for a permanent road between the territory's eastern settlements and the Cumberland settlements. In spite of the treaty, Chickamauga nation increased attacks on settlers the following year. The settlers demanded federal troops intervene, but the War Department refused, blaming settlers for intruding on Indian lands. Blount was unable to appease the frontiersmen, and called up the militia. The militia attacked and destroyed several Chickamauga villages. Secretary of War Henry Knox criticized Blount for the invasion, and refused to issue pay for the militiamen. Blount was able to negotiate a truce with the Chickamauga in 1794.

Toward the middle of his term, Blount began implementing the steps for the territory to gain statehood as the new state of Tennessee. Blount realized he had little chance of becoming governor of the new state, so he instead sought one of the state's two United States Senate seats. He received this appointment on March 30, 1796, and headed to Philadelphia to campaign for Tennessee's statehood. Blount, with the aid of his brother, Thomas (then a Congressman from North Carolina), and James Madison, convinced the house to vote for Tennessee's admission to the Union on May 6. The Senate voted to admit the new state on May 31.

Throughout the 1780s and 1790s, William Blount and his brothers gradually bought up large amounts of western lands. The owned over 2.5 million acres by the mid-1790s. Much of this land was bought on credit, and the family became deeply in debt. In 1795, the market for western lands collapsed, and land prices plummeted. A number of land speculators went bankrupt. Blount attempted to sell land to English investors, but their efforts were unsuccessful.

When France defeated of Spain in the War of the Pyrenees, land speculators became worried that the French would eventually gain control of Spanish-controlled Louisiana, and prevent American access to the Mississippi River. Blount and his friend John Chisholm, an Indian agent, devised a plan to allow Britain to gain control of Florida and Louisiana, and in return give free access to both New Orleans and the Mississippi River to American merchants. The plan called for territorial militias, supported by the British fleet, to attack New Madrid, New Orleans and Pensacola.

To help carry out the plan, Blount recruited Philadelphia physician Nicolas Romayne and a Knoxville merchant named James Carey. Chisholm sailed to England to recruit British supporters. In April 1797, Carey gave a government agent a letter from Blount outlining the conspiracy. The agent turned the letter over to his superior, Colonel David Henley in Knoxville, and Henley in turn sent it to the new Secretary of State, Timothy Pickering, who turned the letter over to President John Adams. Adams concluded that Blount, who was now a senator from Tennessee, had constituted a crime, Adams sent Blount's letter to the Senate, where it was presented on July 3, 1797. When Blount entered the Senate floor, the clerk read the contents of the letter aloud. Vice President Thomas Jefferson asked Blount if he had written the letter. Blount gave an evasive answer and asked that the matter be postponed until the following day. His request was granted. On July 4, Blount refused to return to the Senate. He had arranged for his fellow Tennessee senator William Cocke read a letter which again requested more time. The Senate rejected this request, and formed an investigative committee.

The Senate committee ordered Blount to testify before the committee. Blount attempted to flee by ship to North Carolina, but federal deputies seized the ship and most of his belongings. On July 7, Blount testified before the committee, and denied writing the letter. The following day, the House of Representatives voted 41 to 30 to hold impeachment hearings.

Blount posted bail, but did not wait for his trial. Instead he fled to Tennessee. John Chisholm remained in England in a debtors' prison for several months, and confessed the entire scheme upon his return. Romayne was arrested and forced to testify before the committee, where he confessed to his part in the conspiracy. The House continued to consider evidence for Blount's impeachment in early 1798. At one session on January 30, a brawl took place between two congressmen, Matthew Lyon and Roger Griswold (captured by someone's contemporary drawing, reproduced below). Blount's trial in the Senate took place in January 1799, in Blount's absence. On January 11, 1799, the Senate voted 14 to 11 to dismiss the impeachment, on the basis that impeachment did not extend to senators. 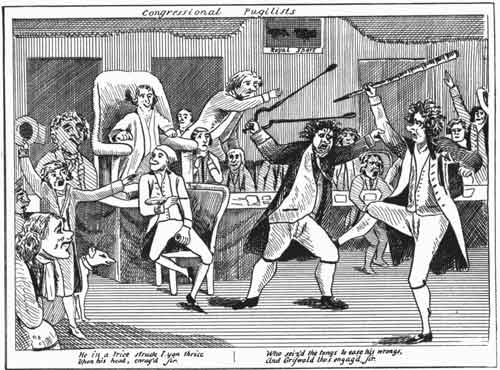 The conspiracy destroyed Blount's reputation. George Washington called for swift justice against Blount. Even Abigail Adams called the conspiracy a "diabolical plot". She facetiously (or maybe not) complained to her husband that it was too bad that there was no guillotine in Philadelphia.

Blount returned to Knoxville, Tennessee in September 1797. Despite his unpopularity in Washington, he was given a parade back at home with a military procession. Most of his Tennessee allies, including Andrew Jackson, remained loyal to him. In October 1798, William Blount was elected to Knox County's state senate seat and on December 3, he was named Speaker of the Senate.

In March 1800, an epidemic swept through Knoxville, and several members of the Blount family fell ill. William Blount died on March 21, 1800. He was buried at the First Presbyterian Church Cemetery a few blocks from his home in Knoxville.
Collapse