When the Constitution was being drafted in 1787, one of the subjects debated was the concept of the Presidency and what that might look like. The experience of having lived under British rule left a near unanimous agreement that the new nation would reject the concept of a monarchy, and a system of checks and balances were imagined to prevent the tyranny that had been seen in the past in societies ruled by a monarch. The new Constitution called for three branches of government, intended to be more or less co-equal: the legislative, the judicial and the executive. The latter would be headed by someone most like a monarch, but without the power to tax. The relationship of the three branches was intended to exist much like a rock-paper-scissors game. The legislators could pass laws, but if the President felt that those laws were unwise, he was given the power of the veto. If the judiciary thought those laws violated the Constitution, they could strike them down. The President could not spend a dime without the approval of the legislators, nor could the president make treaties with foreign nations without the approval of the legislators. 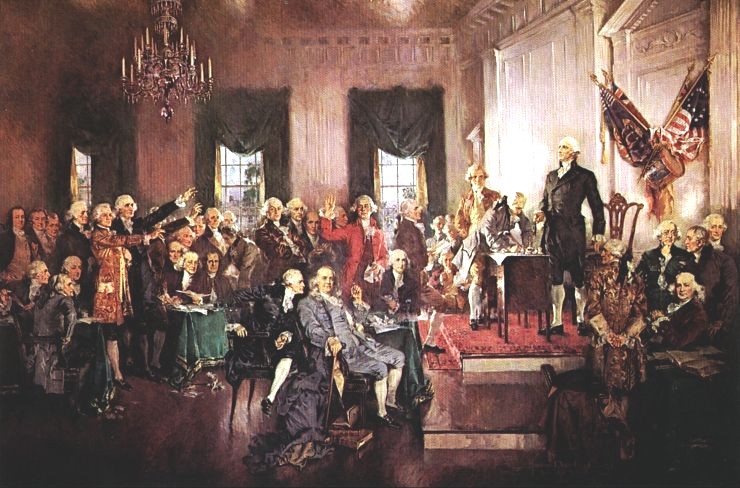 While each was intended to keep the others in check, the framers of the Constitution felt the need for an additional check on the President, who was seen as the single person in whom the most power was entrusted. If the President used the powers of the office in such a way as to harm the general welfare of the nation, or for personal profit, they reasoned that there must be a means in place to remove the President from office.

At the Constitutional Convention, it was presumed that George Washington would be the first person to hold the office of the Presidency. But it was also assumed that subsequent Presidents might lack Washington's virtue, and his willingness to sacrifice for the greater good. It is said that even those present realized that Washington himself was imperfect and that he was prone to errors in judgement.

No one realized more than Washington that the new nation needed a strong central government, in order to secure the nation from the temptation of conquest by foreign power, in order to provide a stable economy, a strong currency, and improved trade. But the nation faced difficulty in getting all of the states to commit to a common goal of retiring the national debt, something necessary to gain credibility in world markets. Rhode Island and Georgia were particular offenders on that front. At the time James Madison observed, "no money is paid into the federal treasury, and no respect is paid to federal authority." The lack of commitment to a strong central government by many states irked Washington, who wrote to John Jay, "to be fearful of vesting Congress, constituted as that body is, with ample authorities for national purposes appears to me the very climax of popular absurdities and madness."

But many in the nation remained fearful of placing too much power in a centralized government, concerned that it would evolve into a monarchy of the kind that had oppressed it as the British had. As Thomas Jefferson put it, "an elective despotism was not the government we fought for."

Washington supported the call for a national convention, even though he wished that it would proceed without him. He was tired and had been away from home for eight years. Further involvement in national politics had little to offer him personally. As historian Jeffrey Engel put it, "he had nowhere to go but down." Bound by a sense of duty, he arrived at the Constitutional Convention as the logical choice to become the nation's first President.

At the convention, discussion turned to the question of how to remove a President who was unfit for office. Some delegates were reluctant to consider the question for fear of appearing disrespectful to Washington. John Dickenson, a delegate from Pennsylvania disagreed. He said that this issue was "so important that no man ought to be silent or reserved." Washington's neighbor and friend George Mason of Virginia agreed. The first proposal for constitutional language on this issue came from Hugh Williamson of North Carolina, who proposed that the President be "removable on impeachment and conviction of malpractice or neglect of duty." Impeachment was a practice then used to remove corrupt judges from office.

Pennsylvania's Gouverneur Morris wanted to have a strong President who would protect the citizenry from the tyranny of the legislators. He was worried that if the President could be impeached by the legislature, "it will hold him in such dependence that he will be no check on the legislature, and will not be a firm guardian of the people and of the public interest."

On July 20, 1787, Williamson's proposed language was debated. The motion enjoyed considerable support despite Morris's objections. North Carolina delegate Hugh Davies argued that without impeachment, a president would "spare no effort or means whatever to get himself re-elected" through ongoing collusion or deception. George Mason agreed, noting that someone who had managed to get elected once through corrupt means could repeat the process, which escaping accountability for his deception. Benjamin Franklin suggested that a president should welcome the opportunity to face impeachment by trial, noting that without such a process, the only other alternative for his removal from office would be assassination. Franklin was not being facetious. He was concerned that a stable republic could not be built on a foundation of violence.

The debate next turned to a discussion of whether it was proper to remove a president for "malpractice". It was argued that if the legislature could remove a president because it disagreed with his decision making, was it not then substituting it's judgement for that of the electors? James Madison agreed that the grounds for impeachment required more specificity. He cited as examples a President's incapacity, or oppressive conduct. He added bribery and treason to this list. Elbridge Gerry of Massachusetts agreed. This argument seemed to change Morris's mind, though he was still concerned that the process should not make the President afraid of the legislature.

Madison suggested "incapacity, negligence or perfidy" as the grounds for impeachment. By September 4th, the proposed language became: "He shall be removed from his office on impeachment by the House of Representatives and conviction by the Senate for treason or bribery." This was insufficient for George Mason, who thought more was needed. He suggested adding "maladministration" to the list. Madison convinced him that this was problematic as it allowed for the possibility that a President could be impeached for merely being unpopular. Mason then suggested that in addition to treason or bribery, the provision add "and other high crimes and misdemeanors." The result was the current language in the article as it exists today. 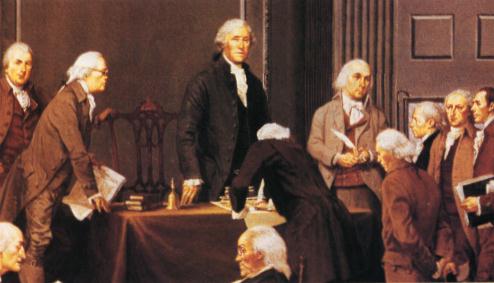 When the time came to sell the provision to the voters of his state, Edmund Randolph of Virginia explained: "No man ever thought of impeaching a man for an opinion or even for making a mistake, so long as the error came while in honest search of an ideal course." James Irredell of North Carolina agreed, stating that impeachment required "wicked motive."
Collapse