William Worth Belknap was a lawyer, a soldier in the Union Army, agovernment administrator in Iowa, and the 30th United States Secretary of War under President Ulysses S. Grant. He was also the first cabinet member to be impeached. 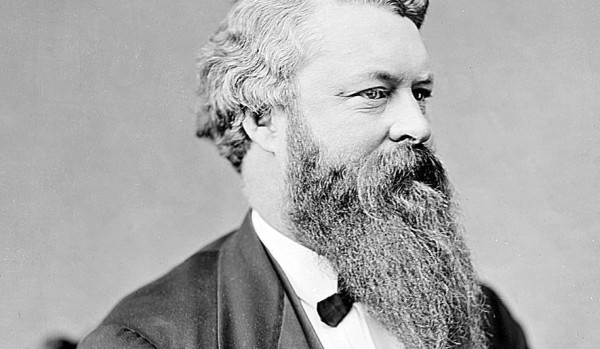 Belknap was a native of New York state. He graduated from Princeton University in 1848 and passed the bar in 1851. He moved to Iowa, where he practiced law, entered politics as a Democrat and served one term in the Iowa House of Representatives. When the Civil War broke out in 1861, Belknap joined the Union Army. He fought in numerous battles, including Shiloh and Corinth. By the end of the war, Belknap had been promoted to brigadier general of volunteers, and received a brevet promotion to major general.

After declining a regular Army commission, Belknap was appointed Iowa's Collector of Internal Revenue by President Andrew Johnson. In 1869, President Ulysses S. Grant appointed Belknap as Secretary of War. In 1871, Belknap was investigated by Congress, after he was directly involved in the sale of arms and munitions to France, while the United States was ostensibly neutral during the Franco-Prussian War.

On the advice of General of the Army William T. Sherman, Grant appointed Belknap to Secretary of War on October 25, 1869, to take the place of Secretary John A. Rawlins who had died in office of tuberculosis. Sherman had served briefly as acting Secretary of War, after Rawlins death. Belknap had served under Sherman in the Atlanta Campaign and on Sherman's March to the Sea. Grant concurred wish Sherman's high regard for Belknap. As secretary, Belknap implemented several positive initiatives. But he also ran afoul of his former commander. He bypassed Sherman when making appointments, and reduced Sherman's budget. In 1874, Sherman responded by leaving Washington and moving his headquarters to St. Louis.

During the summer of 1870, Belknap successfully lobbied Congress to grant him the sole power to appoint and license agents, known as sutlers, with ownership rights to highly lucrative "traderships" at U.S. military forts in the Western frontier. These monopoly traderships were highly sought after. On July 15, the Commanding General of the Army's power to appoint traderships was repealed, further reducing Sherman's authority. Soldiers on the Western frontier were thus forced to buy goods at exorbitant prices from these traders. The traders sold high-quality single-shot breech-loaders and repeating rifles to hostile Native American tribes, while Army requisitions for rifles were filled by Belknap's War Department with inferior single-shot breech-loaders that jammed frequently. The policy may have contributed to the defeat of George Armstrong Custer and the 7th Cavalry at Battle of the Little Big Horn in June 1876.

Belknaps displayed an extravagant lifestyle of entertaining Washington society, holding lavish parties, and wearing elegant clothes, financed by the receipt of kickbacks from these traders. In February 1876, when the Democratic-controlled House of Representatives launched an investigation, it was discovered that Belknap and his wives had received about $20,000 in bribes from one trader named Caleb Marsh (approximately $394,000 in 2018).

During the Franco-Prussian War that lasted from 1870 to 1871, the United States declared neutrality. Belknap was accused by Senators Charles Sumner and Carl Schurz, of violating neutrality and selling arms to French agents. Belknap had sold obsolete U.S. War Department firearms to a neighbor of the Remington family, which owned the E. Remington and Sons gun making company. Samuel Remington, as arms-selling agent to the French Government, then arranged the sale of those firearms to France. Later, Belknap sold 54,000,000 cartridges to the French Army, cartridges that would specifically fit the firearms he had previously sold to the Remington's neighbor. A Congressional investigation which took place in 1872 exonerated Belknap, and no criminal charges for impeachment were initiated.

On February 29, 1876 rumors that Belknap was receiving profits from traderships reached Representative Hiester Clymer, chairman of the Committee on Expenditures in the Department of War. Clymer launched an investigation into the War Department. Clymer and Belknap were friends and had been college roommates, but Clymer strongly opposed Republican Reconstruction, something that Belknap had supported. Under Belknap, the Army had been used in combination with the Justice Department to prosecute the Ku Klux Klan, a policy opposed by most Democrats.

Caleb P. Marsh testified to the Clymer Committee that Belknap had personally taken Fort Sill tradership profit payments as part of the partnership agreement between Marsh and John S. Evans. On March 1, Belknap and his counsel went before Clymer's committee, but Belknap declined to testify. On the morning of March 2, Treasury Secretary Benjamin Bristow told President Grant of Belknap's impending impeachment. In a White House meeting soon afterwards, Grant asked for Belknap's resignation. Grant accepted Belknap's resignation at 10:20 a.m. and Clymer's committee was informed at 11:00 a.m. Belknap's resignation did not prevent the Clymer committee from unanimously passing a resolutions to impeach Belknap. The committee drew up five articles of impeachment to be sent to the Senate. Belknap, who was then a private citizen, was impeached by a unanimous vote of the House of Representatives. Speaker of the House Michael C. Kerr informed the Senate that Belknap resigned "with intent to evade the proceedings of impeachment against him."

On March 29 and April 4, 1876, General George Custer testified before the Clymer Committee, which continued to gather evidence for the Senate trial. In Custer's testimony he accused both Grant's brother and the Belknap of corruption.

After Belknap's sudden resignation in March, Grant asked his Secretary of Navy George M. Robeson to run the War Department for a week. Grant then appointed Alphonso Taft (father of William Howard Taft) as Secretary of War. Taft was an attorney and former judge. In May, Grant filled aa vacancy in the Attorney General's post by naming the incumbent, Edwards Pierrepont, to serve as Minister to England. He then appointed Taft to serve as Attorney General, and J. Donald Cameron to succeed Taft as Secretary of War.

On March 4, 1876, a month before his Senate impeachment trial, Grant's Attorney General Edwards Pierrepont had Belknap arrested. Pierrepont put an armed guard around Belknao's home to ensure he did not attempt to flee. In May 1876, Grant named Pierrepont Minister to Britain, and appointed his Secretary of War Alphonso Taft to be Attorney General. After Belknap's Senate acquittal on August 1, the guards were removed. Belknap was indicted by a grand jury on the same day, and set for trial in the District of Columbia federal court.

On February 2, 1877, Belknap visited Grant and pleaded for his indictment to be dismissed. The next day Grant asked his cabinet for advice.Secretary of State Hamilton Fish was wanted Belknap to be tried, but Grant disagreed and wrote to Taft that the District Attorney should be directed to dismiss the case. Following Grant's instructions, Taft told Washington, D.C. District Attorney Henry H. Wells that the evidence against Belknap would not sustain a conviction, and that Belknap had suffered enough during the Senate trial. Wells moved for dismissal and on February 8, 1877, Belknap's case was dismissed by Justice Arthur MacArthur Sr. 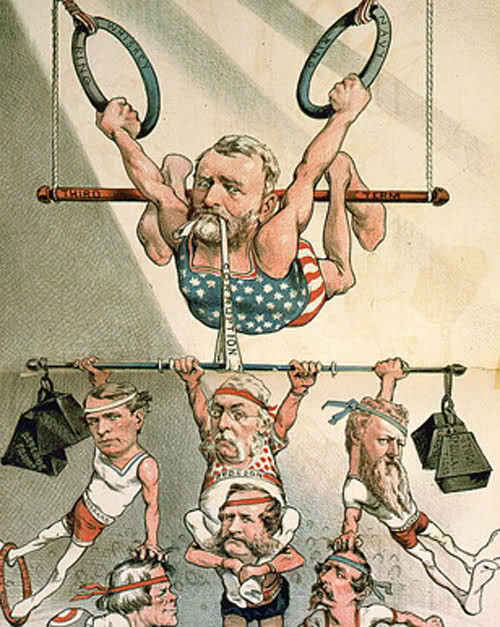 Years after his impeachment, Belknap's reputation still remained damaged. During the 1880 presidential race, he was among those mocked in a Puck magazine cartoon called Grant the Acrobat, by Joseph Ferdinand Keppler. Belknap died from a massive heart attack in Washington, D.C. on Sunday October 12, 1890.
Collapse