Things must have been tense between "running mates" Thomas Jefferson and Aaron Burr. When they two men ran as the Democratic-Republican candidates for President against John Adams in 1800, at a time when there was no designation for President and Vice-President, the two men tied for first in the electoral college, Jefferson assumed that he would get the top spot, and Burr the Vice-Presidency. "Not so fast", thought Burr, and Jefferson found out what happens when you assume. It was unclear who the third President of the United States would be at first, and it wasn't until Alexander Hamilton decided that while he hated Jefferson, he hated his New York rival Burr worse. Ultimately Jefferson was chosen the winner in the contest. This "crisis" brought about a change in the rules in which parties clearly designated who their candidate for President was and who their candidate for Vice-President was. 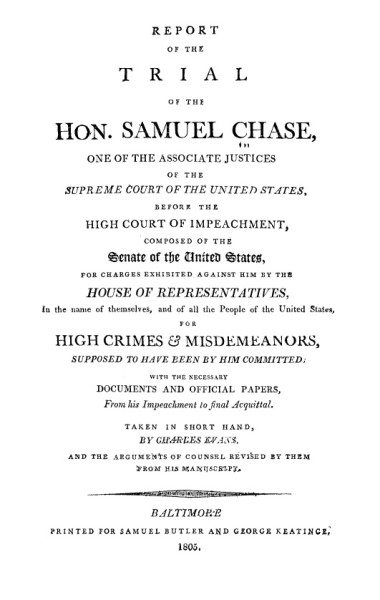 This wasn't the only time the third President and his running mate would come into conflict. In 1803 Vice-President Burr, in his role as president of the Senate, would preside over the impeachment trial of Federalist judge Samuel Chase. Whatever his faults may have been, Burr is generally considered to have exercised his function as "judge" in the case in a fair and principled manner, something that Jefferson wasn't very happy about.

In 1788, Samuel Chase of Maryland was appointed chief justice of the District Criminal Court in Baltimore and served until 1796. In 1791, he became Chief Justice of the Maryland General Court, until January 26, 1796, when President George Washington appointed him as an associate justice of the Supreme Court of the United States. Chase served on the court until his death on June 19, 1811. When Jefferson became President, he wasn't very happy at how the Judicial Branch of government was impeding his ability to exercise his presidential power and especially how he was prevented from replacing Federalist judges with those more in tune with his ideology. He began an effort to remove the Federalists from the bench. Shortly after his inauguration, his supporters in Congress had repealed the Judiciary Act of 1801, abolishing the lower courts created by the legislation and terminating their Federalist judges despite their having been granted lifetime appointments.

One of the biggest critics of Jefferson's attack on the independence of the Judiciary was Samuel Chase. In May of 1803, two years after the repeal of the Judiciary Act, Chase commented publicly in his charge to a Baltimore grand jury, about Jefferson's actions, saying that the repeal of the act would "take away all security for property and personal liberty, and our Republican constitution will sink into a mobocracy."

Chase had previously made public comments of a political rather than a judicial nature. In April 1800, while acting as a district judge, Chase had been strongly critical of Thomas Cooper, who had been indicted under the Alien and Sedition Acts. Many believed that Chase had gone too far in sounding more like a prosecutor rather than a judge, as he expressed support for the controversial legislation. Also in 1800, when a grand jury in New Castle, Delaware refused to indict a local printer, Chase refused to discharge the jury, attempting to coerce them into an indictment. In Jefferson's view, Chase had crossed the line. The Supreme Court's decision in Marbury v. Madison had made it impossible for Jefferson to fire Chase, so he thought that impeachment may be an avenue to get rid of the strong Federalist jurist and replace him with someone more politically palatable. Jefferson wrote to Congressman Joseph Hopper Nicholson of Maryland, asking: "Ought the seditious and official attack [by Chase] on the principles of our Constitution to go unpunished?"

Virginia Congressman John Randolph of Roanoke agreed with his President. He led the movement to impeach Chase. The House of Representatives served Chase with eight articles of impeachment in late 1803, one of which involved Chase's handling of the trial of John Fries. Two more focused on his conduct in the political libel trial of James Callender. One article covered Chase's conduct with the New Castle grand jury, charging that he "did descend from the dignity of a judge and stoop to the level of an informer by refusing to discharge the grand jury, although entreated by several of the said jury so to do." Three articles focused on errors alleged to be made by chase in his conduct as a judge and the eighth article was directed at his "intemperate and inflammatory, peculiarly indecent and unbecoming, highly unwarrantable, highly indecent" remarks while "charging" or authorizing a Baltimore grand jury.

On March 12, 1804, the House voted 73 to 32 to impeach Chase. The United States Senate—controlled by the Jeffersonian Democratic-Republicans—began the impeachment trial of Chase on February 9, 1805, with Vice President Aaron Burr presiding and John Randolph leading the prosecution. Burr's judicial temperament in presiding over the trial has been praised by historians and credited as helping to preserve the principle of judicial independence that was established by Marbury v. Madison in 1803. One contemporary newspaper wrote that Burr had conducted the proceedings with the "impartiality of an angel, but with the rigor of a devil"

All the counts involved Chase's work as a trial judge in lower circuit courts. In those days, Supreme Court justices had the added duty of serving as individual judges on circuit courts, a practice that was ended in the late 19th century. At the heart of the allegations was the idea that political bias had led Chase to treat defendants and their counsel in a blatantly unfair manner. Chase's defense lawyers called the prosecution a political effort by his Republican enemies. In answer to the articles of impeachment, Chase argued that all of his actions had been motivated by following judicial precedent, and by properly exercising his judicial duty to restrain advocates from improper statements of law, and considerations of judicial efficiency.

The Senate voted to acquit Chase of all charges on March 1, 1805. There were 34 Senators present (25 Republicans and 9 Federalists), and 23 votes were needed to reach the required two-thirds majority for conviction and removal from office. If the vote had gone strictly along party lines, Chase's goose would have been cooked. But of the eight votes cast (one on each article of impeachment), the closest vote was 18 for conviction/removal from office and 16 for acquittal. This was in regards to the Baltimore grand jury charge. The result was that Chase got to keep his job. 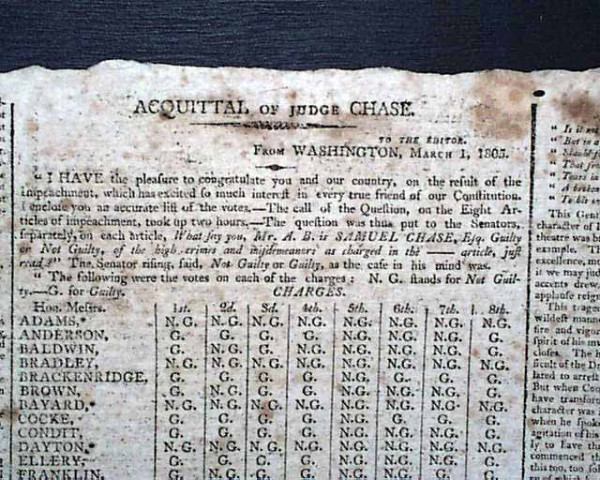 So far Chase is the only U.S. Supreme Court justice to have been impeached. The impeachment raised constitutional questions over the nature of the judiciary and about the appropriate extent of judicial independence under the Constitution. The case sought to reinforce the concept that the judiciary was prohibited from engaging in partisan politics. Chief Justice William Rehnquist later noted in his book Grand Inquests, some senators declined to convict Chase despite their partisan hostility to him, apparently because they doubted that disagreement with the quality of his judging was sufficient grounds for removal. All impeachments of federal judges since Chase have been based on allegations of legal or ethical misconduct, not on judicial performance.

Samuel Chase died of a heart attack in 1811. He was interred in what is now Baltimore's Old Saint Paul's Cemetery. As for Burr, he was not placed on the Democratic-Republican ticket in the election of 1804. That year he had not only disappointed his President. He also killed the man who denied him the Presidency. Burr shot his political rival Alexander Hamilton in a famous duel in 1804, but he was never tried for the illegal duel and all charges against him were eventually dropped. Still, Hamilton's death ended Burr's political career. 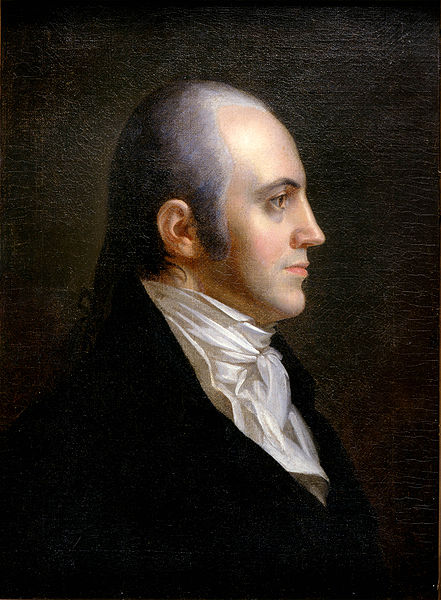 Burr left Washington, D.C., and traveled west seeking to make his fortune, financially and politically. His activities eventually led to his arrest on charges of treason in 1807. Once again he would frustrate Thomas Jefferson as he was tried and acquitted multiple times. Though not convicted, the events left Burr a broken man, with large debts and few friends. He left the United States for Europe. He remained overseas until 1812, when he returned to the United States to practice law in New York City. He spent the rest of his life there in relative obscurity. He suffered a stroke in 1834 and died in 1836.
Collapse