Presidents aren't the only ones who can be impeached. Charges of treason, bribery and "high crimes and misdemeanors" can be levied against any civil officer of the federal government at the discretion of the House of Representatives. In approximately 16 cases, the official who was the subject or potential subject of impeachment was a federal court judge. One of the most famous of these was the attempts to impeach Supreme Court Justice William O. Douglas, led by House Majority Leader (and future President) Gerald Ford in 1970.

The controversial Douglas was one of the leading liberals on the court, who earned the nickname "Wild Bill", in part for his fierce independent streak, and in part because of his controversial personal life. He was nominated as an Associate Justice of the Court by President Franklin D. Roosevelt, and was confirmed at the age of 40, one of the youngest justices appointed to the court. His term lasted for 36 years and 211 days from 1939 to 1975, the longest in the history of the Supreme Court. According to some historians, Roosevelt had wanted Douglas to be his running mate in 1944, but he his party bosses nixed this and chose Harry Truman instead. In 1975 Time magazine called Douglas "the most doctrinaire and committed civil libertarian ever to sit on the court". 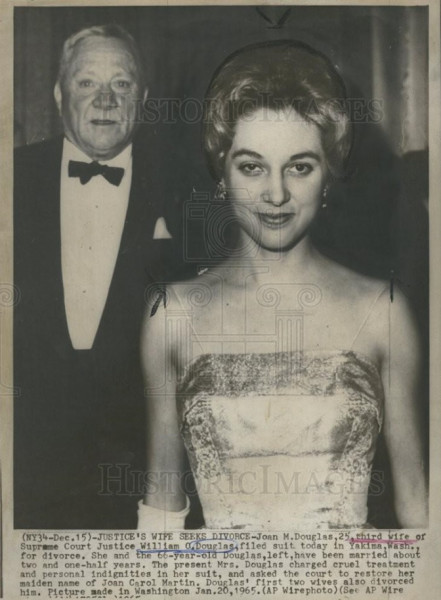 Douglas's personal life was controversial. In an article in the Washington Post reviewing a biography of Douglas, law professor Jeffrey Rosen writes:

"[Biographer Bruce Allen] Murphy omits no details of Douglas's private life, where he appears to have been something of a monster. His neglected children found him "scary" and noted that he spoke to them only when "press photographers wanted a picture." They also resented his treatment of their mother, his first wife, whom he threw over after 28 years of marriage for a series of younger women. He left his third wife for a high school student who had asked him to sponsor her senior thesis, and then divorced her after 24 months for a college student whom he had met while she was a waitress in a cocktail lounge. He kept a room at the University Club, to which his messenger would drive Supreme Court secretaries who caught his fancy. In his sixties, he routinely invited flight attendants to visit him at the Court, where he would lunge at them in his chambers. He would not have survived the era of Anita Hill."

In July of 1953 Douglas divorced his first wife of 30 years, Mildred Riddle, as the result of an affair with a younger woman. While still married to Riddle, Douglas began an open affair with Mercedes Hester Davidson in 1951. He was criticized by his fellow justices for his lack of discretion about the affair. According to Douglas's staffer Harry Datcher, Douglas "did what he did in the open. He didn't give a damn what people thought of him." He divorced Riddle in 1953 and married Davidson on December 14, 1954. Seven years later, in 1961, Douglas had another affair, this time with Joan Martin, an Allegheny College student writing her thesis on him. They married in August of 1963, when Douglas was 64 and Martin was 23. That marriage only lasted three years with another affair leading to another divorce and another marriage. On July 15, 1966, Douglas married Cathleen Heffernan, a 22-year-old student at Marylhurst College. They had met when he was vacationing at Mount St. Helens Lodge, a mountain wilderness lodge in Washington state at Spirit Lake, where she was working for the summer as a waitress.

Douglas was twice the subject of impeachment attempts. On June 17, 1953, Representative William M. Wheeler of Georgia introduced a motion to impeach Douglas because of Douglas's granting of a brief stay of execution in the case of Ethel and Julius Rosenberg case. The resolution was referred the next day to the Judiciary Committee to investigate the charges. On July 7, 1953 the committee voted to end the investigation.

Douglas's many divorces set in motion the circumstances that led to the second set of impeachment proceedings. In order to meet the financial challenges of being divorced on three occasions, Douglas was forced to maintain a very busy speaking and publishing schedule to supplement his income. His divorces and settlements left him financially burdened.

Douglas became president of the Parvin Foundation, an organization financed from the sale of the infamous Flamingo Hotel by casino financier Albert Parvin. This was met with the moral indignation of then-House Minority Leader Gerald R. Ford, who was also disgusted by Douglas's lifestyle. Ford was disappointed with the Senate over the failed nominations of Clement Haynsworth and G. Harrold Carswell to the court. In April 1970, Ford moved to impeach Douglas, for reasons attributed in part to his disagreement with the Senate's rejection of the two conservative nominees.

House Judiciary Chairman Emanuel Celler led an investigation into Douglas's conduct that concluded that there was no evidence of any criminal conduct by Douglas. Attorney General John N. Mitchell and the Nixon administration wanted to bring about the removal of the liberal justice Douglas from the court and they attempted unsuccessfully to gather evidence against him. Ford decided to proceed with the first major attempt to impeach a Supreme Court Justice in the modern era.

Hearings began in late April 1970. Ford was the main witness, and he attacked Douglas for his "liberal opinions", his "defense of the filthy film" (the controversial Swedish film I Am Curious (Yellow)) and his ties to Parvin. Douglas was also criticized for accepting $350 for an article he wrote on folk music in the magazine Avant Garde. The magazine's publisher had served a prison sentence for the distribution of another magazine in 1966 that had been deemed pornographic. Ford conceded that Douglas's article was not pornographic, but he went on to add, "although it praises the lusty, lurid, and risqué along with the social protest of left-wing folk singers." Ford also attacked Douglas for publishing an article in Evergreen Review, which he claimed was known to publish photographs of naked women. When Ford refused to give the Democrats copies of the magazines, Congressman Wayne Hays quipped, "Has anybody read the article – or is everybody over there who has a magazine just looking at the pictures?" 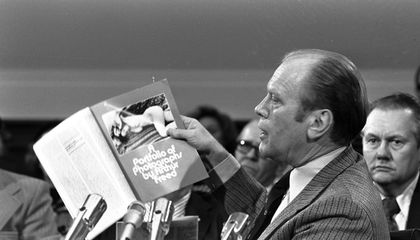 It soon became clear that the impeachment proceedings were not going anywhere and they were brought to a close. No public vote on the matter was taken. Professor Joshua Kastenberg claims that Attorney General John Mitchell and his deputy, William Wilson had promised Ford that the Central Intelligence Agency, the Securities and Exchange Commission, the Internal Revenue Service, and the Federal Bureau of Investigations had evidence of Douglas’ criminal conduct. However, none of these agencies presented any evidence of wrongdoing by Douglas.

Douglas himself believed that strangers snooping around his Washington home were FBI agents, attempting to plant marijuana to entrap him. In a private letter to his neighbors, he said: "I wrote you last fall or winter that federal agents were in Yakima and Goose Prairie looking me over at Goose Prairie. I thought they were merely counting fence posts. But I learned in New York City yesterday that they were planting marijuana with the prospect of a nice big TV-covered raid in July or August. I forgot to tell you that this gang in power is not in search of truth. They are 'search and destroy' people." 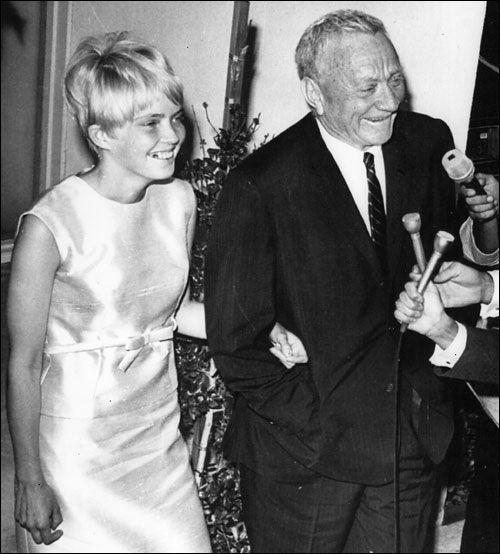 On December 31, 1974, while on vacation, the 76 year old Douglas suffered a debilitating stroke in the right hemisphere of his brain. It paralyzed his left leg and forced him to use a wheelchair and left him severely disabled. He insisted on continuing to participate in Supreme Court affairs despite his incapacity. At the urging of his friend Abe Fortas, Douglas finally retired on November 12, 1975, after 36 years of service. He was the last serving Supreme Court Justice to have been appointed by President Roosevelt. His formal resignation was submitted to then-President Gerald Ford. In his response, Ford paid tribute to the retiring justice, writing: "May I express on behalf of all our countrymen this nation's great gratitude for your more than thirty-six years as a member of the Supreme Court. Your distinguished years of service are unequaled in all the history of the Court." Ford also hosted Douglas and his wife Cathleen as honored guests at a White House state dinner later that same month. According to Ford, "We had had differences in the past, but I wanted to stress that bygones were bygones."
Collapse