One of my favorite Presidential trivia questions is: Which President played in two World Series? That's a bit of a trick question. While he was captain of the Yale University baseball team, George Herbert Walker Bush played in the first two College World Series in in 1947 and 1948. 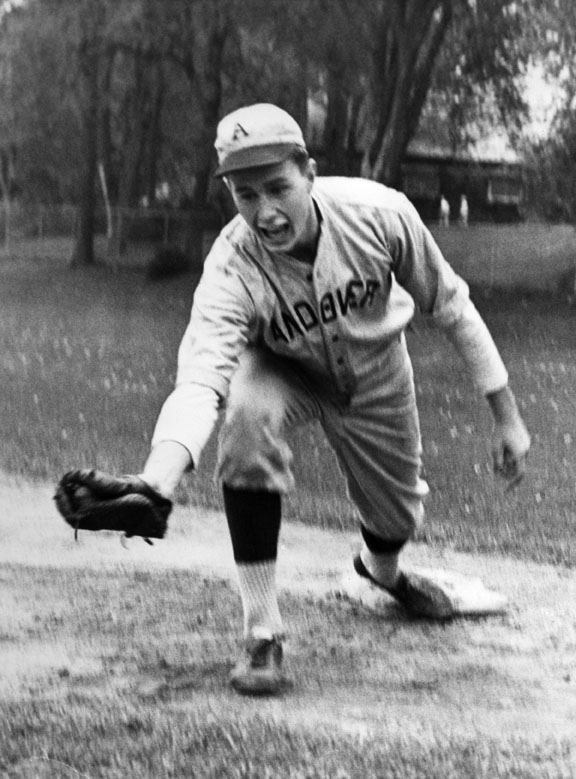 The elder President Bush had been accepted to Yale University prior to his enlistment in the military. When he returned home from the war, after surviving having his plane shot down on September 2, 1944, he took up the offer to attend the prestigious school, after his discharge and after getting married to the former Barbara Pierce. While at Yale, he was enrolled in an accelerated program that allowed him to graduate in two and a half years, rather than four. He was a member of the Delta Kappa Epsilon fraternity and was elected as its president. While at Yale he also captained the Yale baseball team. He was a left-handed first baseman, and captained the team when it played in the first two College World Series. As the team captain, Bush met Babe Ruth before a game during his senior year. 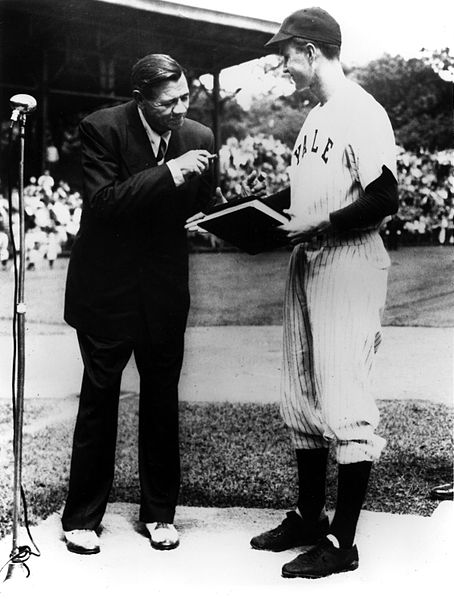 Bush was described in a Sports Illustrated article as a "slick-fielding first baseman". The team played in the first of college baseball's national championship at Hyames Field on the campus of Western Michigan. It was a small ballpark on a hillside in Kalamazoo, Michigan, that was described by an SI writer as a real-life "field of dreams" for college players in 1947.

Bush told Associated Press in a phone interview: "I remember going out there and thinking, 'Well, we're pretty darned lucky as an Ivy League team to be in the big time here,' but there we were." President Bush, added "We thought about it a lot and talked about it in the locker room. A lot of us on the team were veterans and we had come back from the war, so maybe that made it a little less apprehensive. On the other hand, it didn't deduct from our enthusiasm and our desire to win, which we did not do."

But victory proved elusive for the Yale squad that year. Instead, the title went to the California team called the Bears. The first few innings were played in a steady rain. Yale led 4-2 before some strategy by the team's manager, a former major leaguer, backfired in the seventh inning. "We walked the eighth hitter to get to the pitcher, and it was Jackie Jensen," Bush said. "He hit one that's still rolling out there in Kalamazoo." That big hit tied the game, and the Bears scored twice more in the eighth before breaking it open with an 11-run ninth.

Yale rallied in the second game from a 7-2 deficit and tied it in the sixth inning, but the Bears went ahead to stay the following inning, scoring the winning run in an 8-7 victory, sweeping the best of 3 series, two games to none.

Yale found its way back to Kalamazoo the next year for the second College World Series. This time they were once again playing a team from California, this time from Southern California. They took the series to three games, but the California team won, with the final game ending on a triple play, with Bush on deck. Reflecting on the game years later, President Bush said: "It was a traumatic experience and letdown for Yale. All of us felt that way. You learn to go with the flow and get on with your life, and that's what all of us did."

After he became president in 1989, Bush kept his baseball memories close by. Tucked in his Oval Office desk was his Yale first baseman's mitt. Former team mate Ethan Allen regarded Bush as one of the best defensive first basemen he had seen. But he was quick to point out to scouts that Bush was "all glove and no hit" -- a label Bush disputes. "I think it was grossly unfair because I think my average was about .240 or .250," he said with a laugh. "And I think if I were playing today in the bigs, I'd probably get about 8 million bucks a year for that." He was asked by a reporter if he might have had the bat to go with the glove had he used aluminum like today's college players, Bush said: "Hey, I might have. I hadn't thought about that." That glove is on display today at the George H. W. Bush Presidential Library in College Station, Texas. He brought it with him when, as President, he was asked to throw out the first pitch at a Baltimore Orioles game. 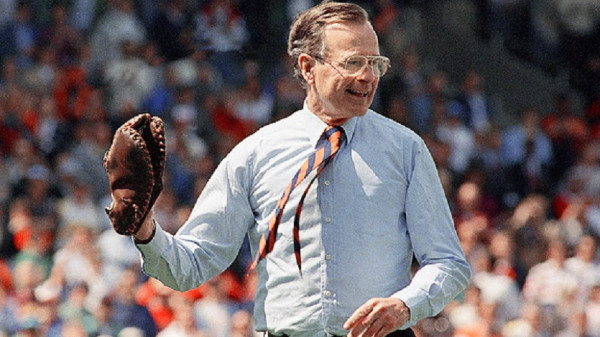