Today we conclude our series on Ranking the Presidents. We finish with perhaps the most difficult task: how do you rank an incumbent president objectively, purging your mind of partisan and personal bias? That's probably impossible to do, but let's try this anyhow. On a scale of 1 to 10 (10 being best), how would you grade Donald Trump, based on the performance of his duties as President? You can go to this link to vote.

Donald John Trump's Presidency is still a work in progress. It could end on January 20, 2021, or it could last as long as January 20, 2025. It is could even end sooner, given the current impeachment inquiry initiated on September 24, 2019, by Nancy Pelosi, Speaker of the United States House of Representatives. That didn't look likely several months ago, following the conclusion of the Muller investigation, and the pronouncements of the leadership of the Democratic Party that there are no impeachment proceedings planned. Just when people think that no President can live in a more politically polarized climate than the last one, we learn otherwise. Donald Trump enjoys a fierce loyalty among his supporters and is fiercely hated by those who oppose him. Hate is not too strong a word, emotions run strong among Trump's detractors. Some of his supporters have been called "Deplorables" by Hillary Clinton, Trump's opponent in the 2016 election, and many wear that label with pride. Conversely, those who oppose Trump do so with such a fervor that a name has been given to the level of their anger: Trump Derangement Syndrome. Those in the middle of these two extremes are a smaller group than in the case of most presidents, but there are still those who would like to see Donald Trump succeed in some of his goals, such as improving the lot of the working class, but who also wish that he would stop posting such childish sounding tweets. 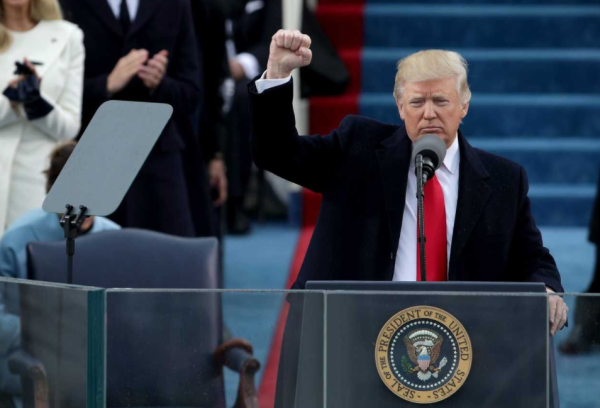 It is said by some (and disputed by others) that James K. Polk came into the presidency with a checklist of four main things that he wanted to accomplish and that "in four short years he met his every goal". If Donald Trump had such a list, it might be (1) Build a wall along the border between the US and Mexico to keep illegal immigrants out of the country; (2) Cancel existing trade deals with other nations and replace them with terms more favorable to US workers; (3) Ban immigration from a number of Muslim nations deemed to be a haven for terrorists; and (4) Repeal the Affordable Care Act.

Many people didn't take Donald Trump seriously as a Presidential candidate. Comedians saw his entry into the race as fodder for their acts and many in Hollywood united against Trump's candidacy. Many of his opponents cited character issues such as alleged dishonest business practices such as non-payment of creditors, as well as a history of demeaning women that some allege went so far as acts of sexual assault. But his opponents soon learned that they underestimated him at their peril. During the election campaign, none of these criticisms mattered to enough voters to in enough states to give Trump a majority of votes in the electoral college. What they heard was that Trump (and Bernie Sanders as well) was asking why in an age of globalization and free trade, so many American workers had been left behind economically? Why had the banks and Wall Street recovered from the great recession so quickly, but mainstream American workers had not? It was ironic for this message to come from someone with Trump's background, but he captured the attention of many average voters. While other candidates from the political establishment were telling voters that they were better off with globalization and free trade, Trump disagreed, and voters listened.

The presidency of Donald Trump began on January 20, 2017, when Trump was inaugurated as the 45th president of the United States. Many protested, chanting "not my President", but for those who believe in the Constitution, he was their President. While Trump lost the popular vote by nearly 3 million votes, he won the Electoral College vote, 304 to 227, and by the law of the land, that made him President. Many accused Trump of benefiting from a Russian sabotage campaign to skew the results, but an intense investigation has failed to show that Trump's victory was decided anywhere but at the ballot box.

Many of Trump's policies are concerning to many Americans, and many elsewhere in the world. So far he has repealed environmental protections intended to address climate change. He ended the Clean Power Plan, withdrew from the Paris Agreement on climate change, and has called for subsidies to increase fossil fuel production. He calls man-made climate change a "hoax".

Trump has failed in his efforts to repeal the Affordable Care Act. However he has signed legislation eliminating the individual mandate provision. He also enacted a partial repeal of the Dodd-Frank Act that had previously imposed stricter constraints on banks in the aftermath of the 2008 financial crisis. He also withdrew from the Trans-Pacific Partnership. He also signed the Tax Cuts and Jobs Act of 2017, which lowered corporate and estate taxes, and most individual income tax rates on a temporary basis.

On the foreign stage, Trump has called for closer ties with Saudi Arabia and Israel. He agreed to sell 110 billion dollars of arms to Saudi Arabia, and has recognized Jerusalem as the capital of Israel. He withdrew the United States from a deal made by the Obama administration with Iran Deal, and issued a controversial executive order denying entry into the U.S. to citizens from several Muslim-majority countries.

Trump's demand for federal funding of a U.S.–Mexico border wall resulted in the 2018–2019 government shutdown (the longest in American history). When the shutdown failed to gain funding for the wall, Trump issued a declaration of a national emergency along the U.S. southern border. He also ended the Deferred Action for Childhood Arrivals (DACA) program.

One of the most enduring aspects of a President's legacy often comes from how he shapes the Supreme Court. Trump has appointed Neil Gorsuch and the more controversial Brett Kavanaugh to the Court, continuing the court's conservative dominance. 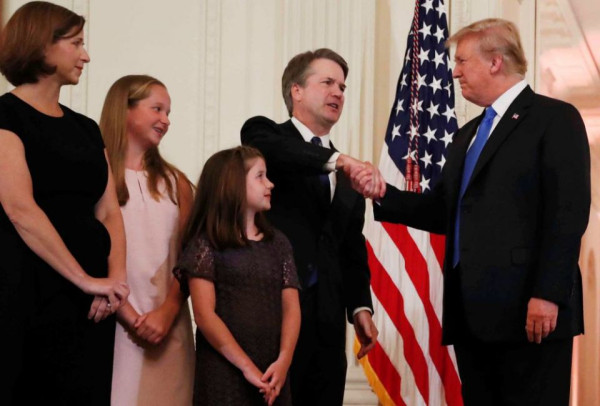 Trump dismissed FBI Director James Comey in 2017, a move praised by some and seen by others as political interference in an independent agency. Special Counsel Robert Muller, himself a former FBI Director, was appointed to take over an existing FBI investigation into Russian interference in the 2016 elections as well as any links between the Trump campaign and the Russian government. Six Trump campaign advisors and staff were indicted and five pled guilty to criminal charges brought in the Special Counsel investigation. Trump has repeatedly denied accusations of collusion and obstruction of justice. He has been highly critical of the investigation, calling it a politically motivated "witch hunt". When the investigation was completed, Attorney General William Barr released a summary of the report to Congress. According to the summary, the investigation found no evidence that Trump or any other members of his campaign "conspired or coordinated" with Russia, although it was clear that Russia did attempt to influence the election. According to Barr, the report did not conclude that Trump criminally obstructed justice, nor did it exonerate him.

Trump has drawn significant criticism for his administration's policy of separating children from parents caught unlawfully crossing the southern border into the United States. Parents are charged with a misdemeanor and jailed, while their children were placed in separate detention centers. Members of Congress from both parties have condemned this practice. Republican Senator Lindsey Graham said, "President Trump could stop this policy with a phone call." The American Academy of Pediatrics, the American College of Physicians and the American Psychiatric Association have condemned the policy. All four living former First Ladies of the United States—Rosalynn Carter, Hillary Clinton, Laura Bush, and Michelle Obama—have condemned the policy. On June 20, 2018, Trump signed an executive order to end family separations at the U.S. border. On July 26, the administration said that 1,442 children had been reunited with their parents while 711 remain in government shelters because their cases are still under review.

FDR used radio to communicate directly with the public, subsequent presidents took to the airwaves. Donald Trump extensively uses the social media app Twitter to personally tweet from @realDonaldTrump, his personal account. His use of Twitter has been unconventional for a president. In May of 2018, a federal judge ruled that Trump's blocking of other Twitter users due to opposing political views violated the First Amendment to the United States Constitution and that he must unblock them. The administration has appealed the court's ruling.

Trump's tweets are often made late at night or in the early hours of the morning. He has used Twitter to pressure his political opponents and potential political allies to pass legislation. While trying to pass the repeal and replacement of the Affordable Care Act, Trump attacked the conservative House Freedom Caucus, whose support he needed. He repeatedly uses belittling nicknames such as Little Marco (for Marco Rubio), Lyin' Ted (for Ted Cruz), and Crooked Hillary (for Hillary Clinton) for his opponents during his campaign. He used the nickname "Rocket Man" for Kim Jong Un of North Korea both in tweets and at a United Nations meeting. Trump has used Twitter to attack federal judges who have ruled against him in court cases and also to criticize officials within his own administration, including then-Secretary of State Rex Tillerson, then-National Security Advisor H. R. McMaster, Deputy Attorney General Rod Rosenstein, and Attorney General Jeff Sessions. Tillerson was eventually fired via a tweet by Trump.

Trump has had a highly polarized approval rating. Trump’s approval rating during his first term has ranged from 35% to 43%. His two-year average Gallup approval rating was the lowest of any president since World War II. If, as some believe, all publicity is good publicity, then Trump has a lot of good publicity. A large number of books have been written about him, his administration, the state of democracy in America, the rise of populism, the reasons for his success, the state of the Republican Party, alleged chaos in his White House and many other topics.

What will Donald Trump's legacy be a century from now? Will historians continue to lump him in with the Buchanans and the Andrew Johnsons of the world? Or will his populist appeal invite a reconsideration of his reputation, based on his connection with those outside of the establishment? Are the many criticisms of Trump valid or even understated? Or are they an amplified message from political elites and those in the entertainment industry that don't reflect the viewpoint of the average wage-earner? 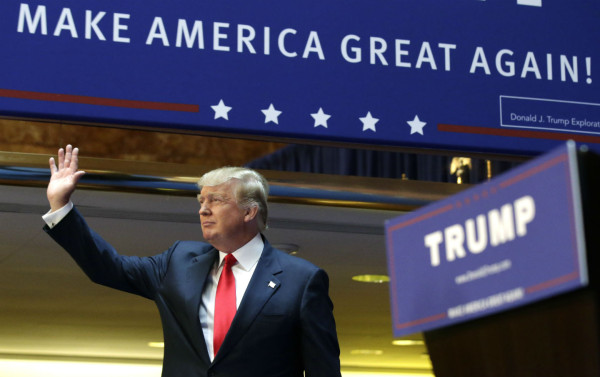 In some cases, Presidential legacies remain solid over decades, even centuries. In other cases, legacies are reassessed as values change. For example, with a greater appreciation of the importance of civil rights and racial and gender equality, the reputations of Presidents such as Lincoln, Grant, Truman, and even Warren Harding, have improved (and in the latter cases they have been rehabilitated to a certain extent), while those such as Andrew Jackson and Woodrow Wilson have declined because of their abhorrent policies of overt racism such as Jackson's "Indian Removal" policy and Wilson's segregationist policies.

Polls for voting on each President's rating will remain open for another week, and on October 23rd, we will publish the results of these rankings. Don't forget to vote if you haven't already, and thank you for voting if you already have!
Collapse