On a scale of 1 to 10 (10 being best), how would you grade George W. Bush, based on the performance of his duties as President? You can go to this link to vote. How will historians view George W. Bush in fifty or a hundred years from now? Will he be another Harry Truman, someone whose presidency looks better with the passage of time? Or will his continue to be ranked as a below average presidency long after partisan biases have been forgotten? Bush entered the presidency on shaky ground, with the 2000 election being decided by the conservative majority of the US Supreme Court. Though subsequent unofficial recounts found that this was probably the correct result, many criticized the legitimacy of the results. Bush soon had the nation rallying behind him as he projected an image of calm resolve and firm leadership following the September 11, 2001 terrorist attacks. But two years later, when Bush organized an attack on Iraq bent on regime change, many questioned the wisdom of the decision, given the lack of any clear connection between the Iraqis and the terrorist attacks of 2001. Concerns of destabilizing the region appeared valid as Iraqis did not interpret the occupation of their country as an act of liberation, but rather an as act of occupation. Then in 2008, just as Bush's time as president was in its final year, the nation experienced the worst economic downturn since the Great Depression, adding to the President's woes.

George Walker Bush was born in New Haven, Connecticut in 1946, the son of future President George Herbert Walker Bush. He grew up in Texas and graduated from Yale University in 1968 and Harvard Business School in 1975. Bush went on to work in the oil industry. He married Laura Welch in 1977 and the following year he lost an election for the U.S. House of Representatives, after his opponent successfully portrayed him as being out of touch with Texas. He went on to become a co-owner of the Texas Rangers baseball team. In 1994 he defeated incumbent Governor Ann Richards and was elected Governor of Texas. In 1998 he was re-elected, receiving 69% of the vote.

Bush ran for President in 2000, defeating Arizona Senator John McCain for the Republican Party nomination. He won the Presidential election, but this wasn't official until he was a controversial decision of the US Supreme Court stopped a recount of the ballots in Florida. He became the fourth person to be elected president while receiving fewer popular votes than his opponent. The victory made Bush the second president to hold the office after his father had also done so. The Bush family had established a strong political pedigree. His brother Jeb Bush, had been Governor of Florida, and was later a candidate for the Republican presidential nomination in the 2016 presidential election. His paternal grandfather, Prescott Bush, had been a U.S. Senator from Connecticut.

Bush entered the office proposing a domestic agenda that would focus on education. The September 11 terrorist attacks changed all that. They occurred eight months into Bush's first term. He responded with what became known as the Bush Doctrine, launching a "War on Terror". He stated that those nations who harbored or aided and abetted terrorists would be considered to be terrorist nations themselves. In response to the attacks, war was began in Afghanistan in 2001 and in Iraq in 2003. Debate ensued over the legitimacy of the war in Iraq. Proponents cited Saddam Hussein's failure to cooperate with UN inspectors and his previous use of chemical weapons on his own people. While there was not clear evidence that Hussein had nuclear weapon capability, Bush's National Security Adviser Condoleezza Rice famously said that no one wanted the "smoking gun" to be a "mushroom cloud." Bush's critics questioned the voracity of the intelligence on which the decision to invade Iraq was based.

The country was taken over quickly and Hussein went into hiding, but was later captured, tried and executed. But keeping the peace in Iraq proved to be a daunting challenge and military casualties increased as suicide bombers and other rebels committed acts of insurrection.

On the domestic front, Bush signed into law broad tax cuts that became known as the "Bush Tax Cuts." He also created the Department of Homeland Security, a government department that sought to centralize all of of the nation's security agencies. The Patriot Act was passed, and while some saw it as an infringement of their civil liberties, other saw it as a small price to pay for preventing another terrorist attack like the one that had occurred in September of 2001. Bush also signed the "No Child Left Behind" Act, as well as the Partial-Birth Abortion Ban Act. Medicare prescription drug benefits for seniors were also part of his domestic agenda. The one accomplishment for which Bush received a large amount of praise was for funding an the AIDS relief program known as PEPFAR. 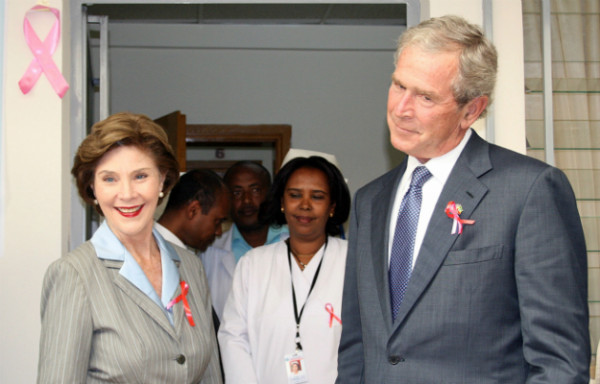 His presidency included national debates on immigration, Social Security, electronic surveillance, and the use of torture by American security agencies.

In 2004 Bush defeated Democratic Senator John Kerry in his bid for re-election. His second term was much rougher than his first as he received criticism for his handling of the Iraq War, and for slow disaster relief for the victims of Hurricane Katrina. The Democratic Party regained control of Congress in the 2006 elections, and in December 2007, the United States entered its longest recession since the Great Depression. The Bush administration worked to obtain congressional passage of multiple economic programs intended to shore up the country's financial system.

At various times, Bush was both one of the most popular and one of the most unpopular U.S. presidents in history. He received the highest recorded presidential approval ratings in the aftermath of the 9/11 attacks, as well as one of the lowest approval ratings during the 2008 financial crisis. After he finished his term in office in 2009, Bush returned to Texas, where he had purchased a home in Dallas. In 2010, he published his memoir, Decision Points. His presidential library was opened in 2013. Bush began painting as a hobby after reading Winston Churchill's essay "Painting as a Pastime". He has painted self-portraits and portraits of world leaders, including Vladimir Putin and Tony Blair. In February 2017, Bush released a book of portraits of veterans, Portraits of Courage. The net proceeds from his book are donated to the George W. Bush Presidential Center for use to benefit veterans organizations.

Bush's presidency has been ranked anywhere between 30th and 39th, with an average ranking of 33rd. But his legacy remains in flux even today. Supporters credit Bush's counter-terrorism policies with preventing another major terrorist attack from occurring in the US after 9/11. They also praise his domestic policies such as the Medicare prescription drug benefit and PEPFAR. Critics give him low marks for his handling of the Iraq War and blame his destabilization of the region for causing the rise of the ISIS movement. They are also critical of his tax policy, his handling of Hurricane Katrina, and blame his economic policies of deregulation as a leading cause of the 2008 financial crisis.

Princeton University scholar Julian Zelizer described Bush's presidency as transformative. He notes, "some people hate him, some people love him, but I do think he'll have a much more substantive perception as time goes on". Bryon Williams of The Huffington Post calls Bush "the most noteworthy president since FDR". He adds that the Patriot Act increased authority of the executive branch. His homeland security reforms amount to be the most significant expansion of the federal government since LBJ's Great Society. Although many of Bush's policies were criticized, these same policies have remained in place in the administrations of his two immediate successors. 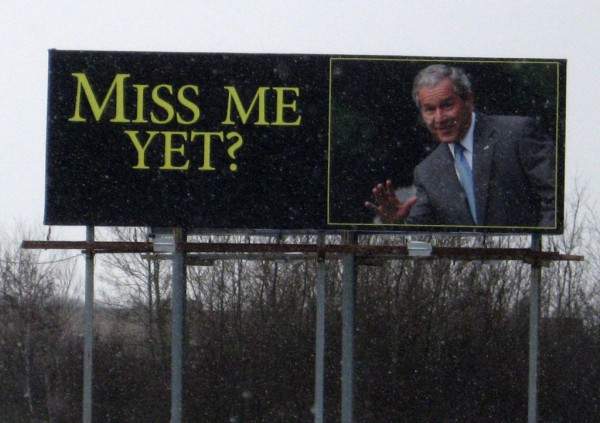 Among the public, Bush's reputation has improved since his presidency ended in 2009. In February 2012, Gallup reported that "Americans views of President Bush have become more positive in the three years since he left office." Bush's favorability ratings in public opinion surveys had begun to from 35 percent in March 2009, to 45 percent in July 2010. In April 2013, Bush's approval rating stood at 47 percent approval in a poll jointly conducted for The Washington Post and ABC. Bush's public image saw greater improvement starting in 2017, which many view as Democrats seeing him more favorably in comparison to Donald Trump's presidency. A series of roadside advertisements first appeared in February 2010. They featured former President Bush's image waving and smiling from a billboard over the words "MISS ME YET?"
Collapse