On a scale of 1 to 10 (10 being best), how would you grade Richard Nixon, based on the performance of his duties as President? You can go to this link to vote. Richard Nixon reminds us that those at the pinnacle of power are human beings, not superheros or robots. They have human failings and character defects just like the rest of us, sometimes greater than the rest of us. In a game of word association, the first word that comes to mind when one mentions Nixon's name, is "Watergate. It is both the name of an office complex, as well as the greatest scandal in Presidential History. It was the only time in history that a President of the United States failed to complete his term in office because of resignation. After a series of Presidents who strengthened the office of the Presidency, like McKinley, both Roosevelts, Wilson, Eisenhower and Johnson, the power of the office would diminish because a president had abused his power so shockingly. 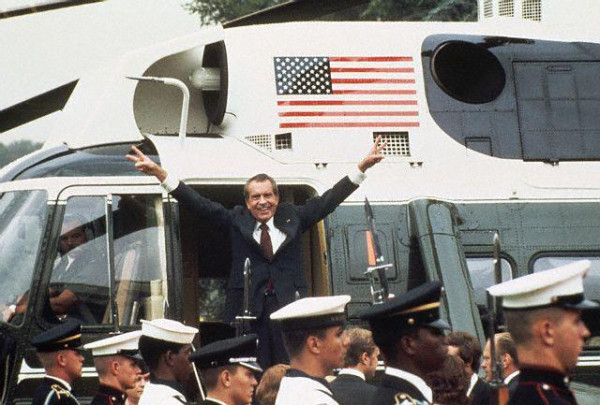 Richard Milhous Nixon was born in Yorba Linda, California, the son of Quaker parents. After completing his undergraduate studies at Whittier College, he graduated from Duke University School of Law in 1937 and returned to California to practice law. He married the former Thelma "Pat" Ryan. The two had met acting in amateur theater together. They moved to Washington in 1942 to work for the federal government. Nixon subsequently served on active duty in the U.S. Navy Reserve during World War II. He was elected to the House of Representatives in 1946 and to the Senate in 1950. He established strong credentials as an anti-communist from his activity on the Alger Hiss Case, which elevated him to national prominence. Nixon was chosen as the running mate of Dwight D. Eisenhower, the Republican Party presidential nominee in the 1952 election. He was almost dumped from the ticket after allegations arose during the campaign that Nixon had a secred "slush fund". He took the the airwaves in the new media of television to give a speech defending himself in which he referred to the family dog "Checkers" as being the only gift that the family had received. He told his audience that the family intended to keep Checkers.

Nixon served for eight years as Vice President, becoming the second-youngest vice president in history at age 40. As Vice-President he gained national attention for his famous "kitchen debate" with Soviet leader Nikita Khrushchev. Nixon first ran for president in 1960, narrowly losing to John F. Kennedy. He planned a return to presidential politics, but suffered a huge setback when he lost a race for governor of California to Pat Brown in 1962. A petulant Nixon blamed the media and told them that they wouldn't "have Nixon to kick around" anymore. The statement wasn't true. Nixon worked behind the scenes for Republican candidates in the ensuing years, building up support for another run for the president in 1968. As the other major Republican candidates stumbled, Nixon won the nomination and the presidency, defeating incumbent Vice President Hubert Humphrey.

Nixon slowly ended American involvement in the war in Vietnam in 1973 and arranged the return of a large number of American POWs. He also ended the military draft. Nixon's surprise visit to China in 1972 eventually led to diplomatic relations between the two nations and he initiated détente and the Anti-Ballistic Missile Treaty with the Soviet Union the same year. He was viewed as being very successful on the diplomatic front. Domestically, Nixon is often criticized by conservatives for many liberal policies such as creation of the Environmental Protection Agency. His administration transferred a lot of power from Washington D.C. to the states. He imposed wage and price controls for ninety days, and enforced desegregation of Southern schools, established the Environmental Protection Agency and declared a "War on Cancer". Nixon also presided over the Apollo 11 moon landing, which signaled the end of the moon race. He was reelected in one of the largest electoral landslides in U.S. history in 1972 when he defeated George McGovern.

In his second term, Nixon ordered an airlift to resupply Israeli losses in the Yom Kippur War. This led to new impetus for the Middle East peace process, but it would also cause an oil crisis at home. The Nixon administration supported a coup in Chile that ousted the government of Salvador Allende and propelled Augusto Pinochet to power. The dominant issue by far, during his second term was the Watergate scandal. A botched burglary in Democratic Party election headquarters led investigators to the White House and ultimately to recordings which revealed a lot of negative information about Nixon. It eroded a great deal of Nixon's political support. On August 9, 1974, he resigned in the face of almost certain impeachment and removal from office, the only time a U.S. president has done so. After his resignation, he was issued a controversial pardon by his successor, Gerald Ford.

In 20 years of retirement, Nixon wrote nine books and undertook many foreign trips, helping to rehabilitate his image into that of an elder statesman. He suffered a debilitating stroke on April 18, 1994 and died four days later at the age of 81.

Nixon's legacy is that of a president who was, in the words of historian and political scientist James MacGregor Burns, both "so brilliant and so morally lacking". Watergate was, as Gerald Ford called it, a "long national nightmare". Biographer Jonathan Aitken argues that "Nixon, both as a man and as a statesman, has been excessively maligned for his faults and inadequately recognized for his virtues. Yet even in a spirit of historical revisionism, no simple verdict is possible."

Some historians say that Nixon's Southern Strategy turned the Southern United States into a Republican stronghold. Nixon moved his party away from the control of isolationists, and became a persuasive advocate of containing Soviet communism. But he was a centrist Republican who sought to steer the Republican party along a middle course, somewhere between the more extreme ideology of Nelson Rockefeller, Barry Goldwater or Ronald Reagan.

Nixon's stance on domestic affairs has been credited with the passage and enforcement of environmental and regulatory legislation. Nixon's creation of the United States Environmental Protection Agency (EPA), and to his enforcement of legislation such as the 1973 Endangered Species Act have given Nixon what one historian calls an "unsought and unacknowledged environmental legacy". Nixon himself did not consider the environmental advances he made in office an important part of his legacy and these were likely driven more by political expediency than any strong environmentalist beliefs. 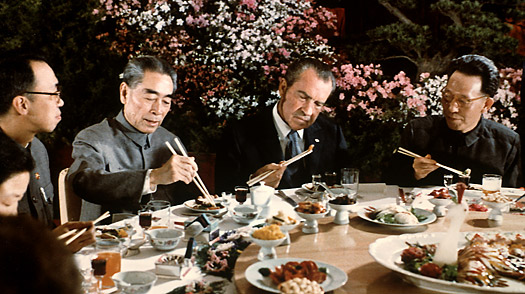 For Nixon, his most important contribution was in the area of foreign affairs, through his policies on Vietnam, China, and the Soviet Union. Nixon himself saw these as central to his place in history. Even his political opponents gave him credit in this field. Nixon's 1972 Presidential opponent George McGovern commented in 1983, "President Nixon probably had a more practical approach to the two superpowers, China and the Soviet Union, than any other president since World War II. With the exception of his inexcusable continuation of the war in Vietnam, Nixon really will get high marks in history." Historian Christopher Andrew gives this assessment of the 37th President: "Nixon was a great statesman on the world stage as well as a shabby practitioner of electoral politics in the domestic arena. While the criminal farce of Watergate was in the making, Nixon's inspirational statesmanship was establishing new working relationships with both Communist China and the Soviet Union."

But Nixon is more often remembered for leaving a legacy of fundamental mistrust of government, as the result of Watergate as well as Vietnam. During the impeachment of Bill Clinton in 1998, Republicans suggested that Clinton's misconduct was comparable to Nixon's, while Democrats contended that Nixon's actions had been far more serious than Clinton's. Watergate created a decrease in the power of the presidency as Congress passed restrictive legislation in its aftermath.

Nixon provided fodder for editorial cartoonists and comedians, who often exaggerated his appearance and mannerisms. He was often portrayed with unshaven jowls, slumped shoulders, and a furrowed, sweaty brow. Nixon had a complex personality. He was very secretive and was also socially awkward. He was inclined to distance himself from people and presented himself as very formal, wearing a coat and tie even when home alone. A famous picture shows Nixon walking along a California beach wearing black wingtip shoes. Biographer Richard Reeves described Nixon as "a strange man of uncomfortable shyness, who functioned best alone with his thoughts. He assumed the worst in people and he brought out the worst in them. He clung to the idea of being 'tough'. He thought that was what had brought him to the edge of greatness. But that was what betrayed him. He could not open himself to other men and he could not open himself to greatness."

Even Bebe Rebozo, one of Nixon's closest friends, did not call him by his first name. Nixon himself said, "Even with close friends, I don't believe in letting your hair down, confiding this and that and the other thing—saying, 'Gee, I couldn't sleep'. I believe you should keep your troubles to yourself. That's just the way I am. Some people are different. Some people think it's good therapy to sit with a close friend and, you know, just spill your guts and reveal their inner psyche—whether they were breast-fed or bottle-fed. Not me. No way." When told that most Americans, even at the end of his career, did not feel they knew him, Nixon replied, "Yeah, it's true. And it's not necessary for them to know." 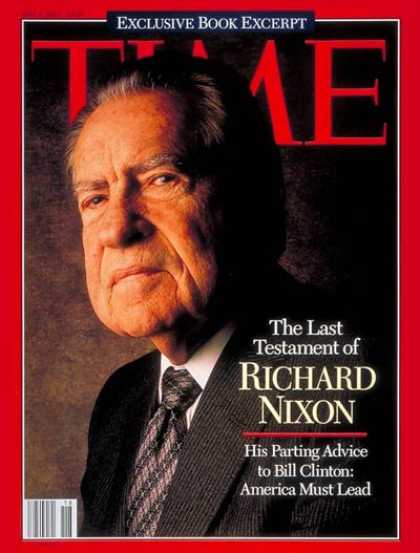 Watergate is the anchor that pulls Nixon down in rankings of Presidents. He has an average ranking of 32nd. A 2017 C-Span ranking places him at 28th, a 2018 Siena rating has him at 29th and a 2018 APSA rating has him at 33rd. Nixon's domestic and foreign policy accomplishments continue to be largely overshadowed by the scandals that enveloped his administration. His legacy has undergone significant reevaluation, but has not been rehabilitated. Political historian Douglas Schoen calls Nixon "the most important American figure in post-war U.S. politics". Constitutional law professor Cass Sunstein wrote in 2017, "If you are listing the five most consequential Presidents in American history, you could make a good argument that Nixon belongs on the list."
Collapse