On a scale of 1 to 10 (10 being best), how would you grade Woodrow Wilson, based on the performance of his duties as President? You can go to this link to vote. Woodrow Wilson is another President whose legacy has changed over the years as civil rights have become a more important measurement of Presidential timber. Wilson scores high marks as a progressive and as someone who was a leader on the world stage. But he loses marks for being a blatant racist, a lost cause southerner, and for vainly holding on to power when he lacked the capacity to be President because of a serious health issue. 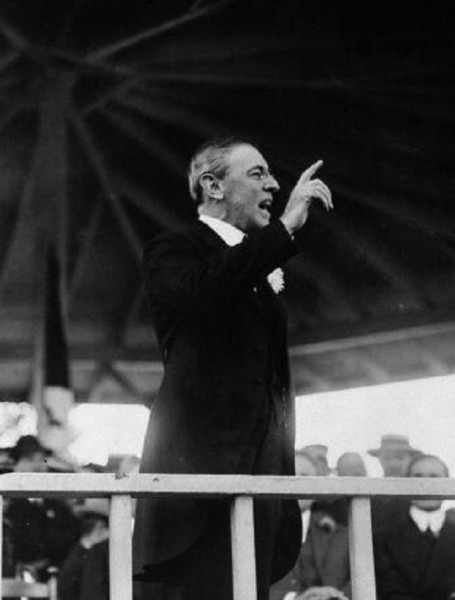 Thomas Woodrow Wilson served as the 28th president of the United States from 1913 to 1921. He was the first southerner since Andrew Johnson to serve as president. Wilson was born in Staunton, Virginia in 1856 and claimed to have a childhood memory of sitting on the lap of Robert E. Lee. He spent his early years in the south. He lived in Augusta, Georgia, and Columbia, South Carolina. After earning a Ph.D. in political science from Johns Hopkins University, Wilson taught at various universities before becoming the president of Princeton. He rose to national prominence and was elected as governor of New Jersey, serving from 1911 to 1913. Wilson refused to tow the line of party bosses. As Governor he was able to win the passage of several progressive reforms and his success in New Jersey built a national reputation for him as a progressive reformer. That was just what the Democratic Party was looking for in 1912, with the Republican party split along ideological lines. It looked as if the country might support Theodore Roosevelt if the Democrats did not give them a progressive alternative. Wilson won the presidential nomination at the 1912 Democratic National Convention and he defeated incumbent Republican President William Howard Taft and Progressive Party nominee Theodore Roosevelt to win the 1912 presidential election.

During his first term, Wilson was able to bring about passage of a number of pieces of progressive legislation, through what he called his "New Freedom" domestic agenda. His first priority was the passage of the Revenue Act of 1913, which lowered tariffs and implemented a federal income tax. Later tax acts implemented a federal estate tax and raised the top income tax rate to 77 percent. Wilson also presided over the passage of the Federal Reserve Act, which created a central banking system in the form of the Federal Reserve System. Two other pieces of major legislation were the Federal Trade Commission Act and the Clayton Antitrust Act. These were passed to regulate and break up large business interests known as trusts.

But Wilson set the clock back when it came to civil rights, especially for African-American. His Confederate roots were showing. Wilson allowed his Cabinet members to segregate their departments on the basis of race and he did so unapologetically.

When World War I began in 1914, at first Wilson maintained a policy of neutrality between the Allied Powers and the Central Powers. He parlayed this into a re-election strategy, running on the slogan "He Kept Us Out of War". He was able to win the state of California, which tipped the electoral college in his favor in the presidential election of 1916, defeating Republican nominee Charles Evans Hughes.

But Wilson didn't keep the nation out of war. In early 1917, with the election behind him, Wilson asked Congress for a declaration of war against Germany. He justified this request because Germany had implemented a policy of unrestricted submarine warfare, and also had tried to provoke Mexico into keeping the US military occupied at home and therefore out of the war. Congress granted the Declaration of War and Wilson presided over war-time mobilization. But he devoted much of his efforts to foreign affairs. He developed his "Fourteen Points" as a blueprint for post-war peace.

When Germany signed an armistice in November 1918, Wilson and other Allied leaders took part in the Paris Peace Conference, where Wilson advocated for the establishment of a multilateral organization known as the League of Nations. The League of Nations was incorporated into the Treaty of Versailles and other treaties with the defeated Central Powers. Wilson was unable to convince the Senate to ratify that treaty or allow the United States to join the League. In the process of attempting to do so, he suffered serious health problems in the form of a series of strokes. Wilson suffered a severe stroke in October 1919 and was incapacitated for the remainder of his presidency. With the assistance of his wife, his physician and his chief of staff, he was able to hide his true condition from the nation, from Congress, and even from his own Vice-President. It was nothing short of a fraudulent deception.

Wilson retired from public office in 1921, though some biographers claim that he had the vain hope of running for re-election. He would outlive his successor, but he died in 1924.

In the past, especially after the resurgence of Germany in the 1930s, scholars generally ranked Wilson as one of the better U.S. presidents. He was given credit for taking steps towards the creation of a stronger federal government, but one that would protect ordinary citizens against the power of large corporations. He was a strong influence on future presidents such as Franklin D. Roosevelt and Lyndon B. Johnson. Many of Wilson's accomplishments, including the Federal Reserve, the Federal Trade Commission, the graduated income tax, and labor laws, continued to influence the United States long after Wilson's death. Wilson's foreign policy influenced subsequent American foreign policy. His League of Nations influenced the development of the United Nations, as many came to regret that it was not adopted. Many saw the failure of Congress in accepting the League as a factor that led to the rise of Adolf Hitler. Subsequent historians praised Wilson for being one of the first statesman to speak out against European imperialism as well as against the economic domination of the defeated nations.

But in spite of these great accomplishments, Wilson has received criticism for his record on race relations and civil liberties. Conservatives have also attacked Wilson for his role in expanding the federal government. More recently, some have called for the removal of Wilson's name from institutions affiliated with Princeton due to his administration's segregation of government offices. 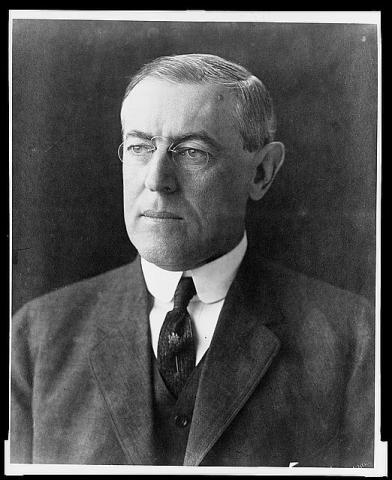 In spite of his poor record on civil rights, Wilson has consistently ranked in the top ten in presidential rankings, though more recently he has slipped to 11th place in three rankings done in the past two years by C-Span, Siena College Research and the American Political Science Association.
Collapse