On a scale of 1 to 10 (10 being best), how would you grade Theodore Roosevelt, based on the performance of his duties as President? You can go to this link to vote.

Why, everybody's gone crazy! What is the matter with all of you? Here's this convention going headlong for Roosevelt for Vice President. Don't any of you realize that there's only one life between that madman and the Presidency? Platt and Quay are no better than idiots! What harm can he do as Governor of New York compared to the damage he will do as President if McKinley should die?

Those words were said to be uttered by Ohio Senator Mark Hanna, chief advisor to President William McKinley, at the 1900 Republican Party nominating convention. Vice President Garrett Hobart had died the previous year, and the party needed a candidate for the second spot on the ticket going into the upcoming election. Party "bosses" Thomas Platt of New York and Matthew Quay of Pennsylvania were pushing to have Roosevelt picked for the job, but not because they were his supporters. Roosevelt, then the Governor of Platt's state, was a reformer who opposed the old ways of the party bosses. Platt wanted him gone, and the Vice-Presidency seemed like a place where Roosevelt could do no harm. Hanna was more prescient. 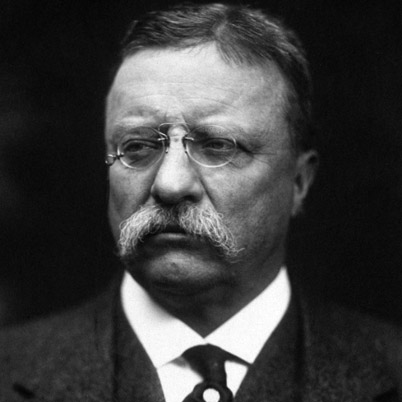 That seemed to be the way it was for the energetic Theodore Roosevelt Jr., the man with the oversized personality. His daughter Alice, a character in her own rite, would later describe her father as someone who always wanted to be the center of attention, or as she put it, "the bride at every wedding and the corpse at every funeral". In 1901 when William McKinley was killed by an assassin's bullet, Roosevelt became President and soon made everyone forget the dignified ways of the late president.

It was quite the transition for someone who was born a sickly child with debilitating asthma. He overcame his physical health problems with determination and grit by embracing a strenuous lifestyle. He combined his exuberant personality, a wide range of interests, and an unstoppable determination to succeed into becoming the dominant personality of his day. Home-schooling led to a lifelong love of nature. He attending Harvard College and pursued another one of his passions, the Navy. His book, The Naval War of 1812, was published in 1882. It established his reputation as a learned historian.

Roosevelt served as a New York State Assemblyman, where the fought corruption at all levels. Upon entering politics, he became the leader of the reform faction of Republicans in New York's state legislature. The deaths of his first wife and that of his mother on the same day (Valentine's day of 1884, the same day that his daughter was born) led to an intense period of grieving. He headed to the badlands of the Dakotas to become a cowboy and cattle rancher before returning home to New York City.

Roosevelt served in a variety of posts, including as a member of the Civil Service Commission, as a New York City Police Commissioner and as Assistant Secretary of the Navy under President William McKinley. He was always a thorn in the side of those who loved the status quo. When war broke out with Spain in 1898, Roosevelt resigned from his job with the Navy to lead a group of volunteers known as the Rough Riders in the Spanish–American War. The group fought bravely and Roosevelt returning home as a war hero. He was elected Governor of New York in 1898 where he fought bossism and corporate greed, irritating those who loved the old ways.

After the death of Vice President Garret Hobart, the New York state party leadership convinced McKinley to accept Roosevelt as his running mate in the 1900 election, over the objections of Mark Hanna. Roosevelt campaigned vigorously, making 480 stops in 23 states. The McKinley-Roosevelt ticket won a landslide victory.

After taking office as Vice President in March 1901, he became President six months later, following McKinley's assassination that September. At 42 years of age he remains the youngest person to become President of the United States. As a leader of the Progressive movement, he championed his "Square Deal" domestic policies. He promised fairness for the average citizen and waged a war on trusts (monopolies). He called for the regulation of railroads, and standards to insure pure food and drugs. Conservation was also a top priority of his and he established many new national parks, forests, and monuments intended to preserve the nation's natural resources. 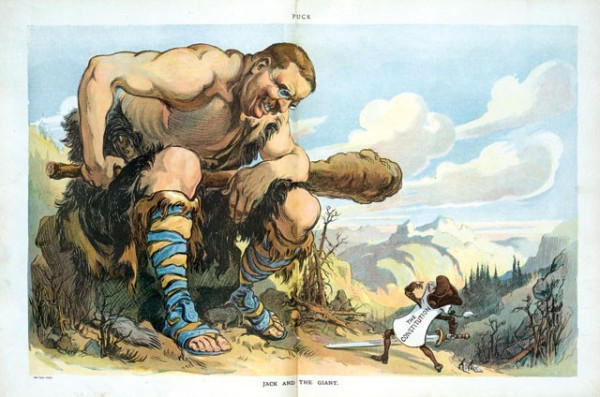 In foreign policy, he focused on Central America, where construction of the Panama Canal was beginning, with his help. He expanded the Navy and sent the Great White Fleet on a world tour to project the United States' naval power around the globe. He was also able to successfully mediate an end to the Russo-Japanese War, for which he won the 1906 Nobel Peace Prize. He was elected in 1904 to a full term as President and continued to promote progressive policies.

In a decision he would later regret, Roosevelt announced that he would not seek re-election in 1908. He selected his close friend, William Howard Taft as his political heir, and Taft won the 1908 presidential election to succeed him. Roosevelt soon became frustrated with Taft's conservatism. He tried to win the 1912 Republican nomination, but failed. He walked out of the 1912 GOP convention and founded a third party, the Progressive, better known as the "Bull Moose" Party. During the campaign he was shot by a would-be assassin, while campaigning in Milwaukee, but he insisted on giving his speech before seeking medical attention. Roosevelt finished second in the 1912 election, but the split allowed the Democratic nominee Woodrow Wilson to win the election.

Following his defeat, Roosevelt led a two-year expedition to the Amazon basin, where he nearly died of tropical disease. During World War I, he criticized President Wilson for keeping the country out of the war with Germany. When the United States entered the war on the side of the allies, he offered once again to lead volunteers to France, but the offer was rejected by the President. (The period of Roosevelt's latter years are the subject of David Pietrusza's excellent work TR's Last Years, reviewed here in this community.) Many expected him to run for president again in 1920, but Roosevelt's health continued to deteriorate, and he died in January of 1919.

Historians credit Roosevelt for bringing the presidency to the center of the American political system. His notable accomplishments in trust busting and conservationism are especially remembered today, at a time when environmental concerns have gained importance as a political and social issue. Liberals remember him for his proposals that set the stage for the modern welfare state created during the New Deal Era, and also for put making the environment a national agenda issue. Conservatives admire his "big stick" diplomacy and he commitment to a strong military. Roosevelt is considered by many to be the architect of the modern presidency, and as a world leader who reshaped the presidency to meet the needs of the new century. He is said to have redefined America's place in the world.

Roosevelt's critics dislike his interventionist and imperialist approach to international affairs, while those on the right reject his vision of the welfare state and emphasis on the superiority of government over private action. But his wide appeal is such that historians typically rank Roosevelt among the top five presidents.

Biographers have stressed Roosevelt's larger-than-life personality. H. W. Brands dubbed Roosevelt "the last romantic", noting how Roosevelt embraced a romantic concept of life that "physical bravery was the highest virtue and war the ultimate test of bravery". As president, Roosevelt repeatedly warned men that they were becoming too office-bound, too comfortable with physical ease and moral laxity. He promoted competitive sports and the Boy Scouts of America, founded in 1910.

Roosevelt was included with Presidents George Washington, Thomas Jefferson, and Abraham Lincoln at the Mount Rushmore Memorial, designed in 1927 with the approval of Republican President Calvin Coolidge. Theodore Roosevelt National Park in the state of North Dakota is named after him. For his gallantry at San Juan Hill, Roosevelt's commanders recommended him for the Medal of Honor, but during his lifetime he was denied this honor for fear that it would increase his political popularity. In the late 1990s, Roosevelt's supporters again recommended the award. On January 16, 2001, President Bill Clinton awarded Theodore Roosevelt the Medal of Honor posthumously for his charge on San Juan Hill, Cuba, during the Spanish–American War. He is the only president to have received the Medal of Honor. 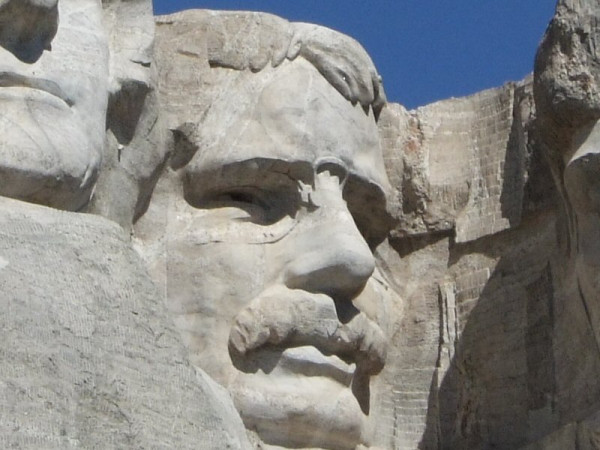 Roosevelt left office with considerable popularity. He remained a major world figure until his death in 1919. His own contemporaries saw him as an influential leader. Former Senator William E. Chandler wrote in January 1909 that Roosevelt "changed the course of American politics." His legacy was reinvigorated after World War II. Historian John Morton Blum, in his 1954 book "The Republican Roosevelt", argued that Roosevelt had been the first truly modern president and that Roosevelt's presidency served as a model to subsequent presidents. Historian Lewis L. Gould describes Roosevelt as "a strong, effective executive whose policies foreshadowed the welfare state." A 2018 poll of the American Political Science Association ranked Roosevelt as the fourth greatest president in history, after George Washington, Abraham Lincoln, and Franklin D. Roosevelt.
Collapse