On a scale of 1 to 10 (10 being best), how would you grade James Garfield, based on the performance of his duties as President? You can go to this link to vote. James Garfield is another of those Presidents who is sometimes left out of presidential rankings because of the brevity of his time in office. He was inaugurated in March of 1881, shot by assassin Charles Guiteau (the poster child for "disgruntled office seeker") in July of that year and dead in September, more likely from negligent medical treatment than from Guiteau's bullet. Garfield's presidency was full of so much potential. A long-time congressman and Civil War veteran, he came to the 1880 Republican Presidential Nominating Convention to nominate fellow Ohioan John Sherman. But when the delegates couldn't agree on any of the declared candidates, they chose Garfield. His untimely death left a lot of "what ifs" about how his experience and wisdom might had guided the nation through the "Guilded Age". 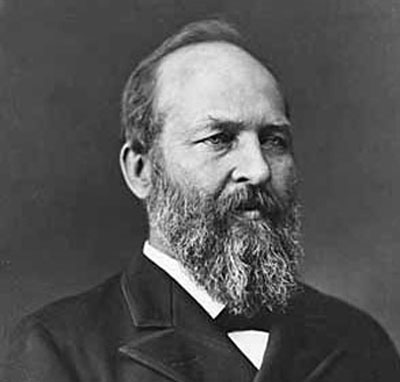 Garfield was born into poverty after his father died shortly after James' birth. He worked on a canal boat and later as a teacher. For a time he was a preacher for the Church of Christ. Garfield entered politics as a Republican in 1857. He served as a member of the Ohio State Senate from 1859 to 1861. Garfield opposed Confederate secession, and he joined the Union Army, rising to the rank of major general during the Civil War. He fought in the battles of Middle Creek, Shiloh, and Chickamauga.

Garfield was first elected to Congress in 1862 to represent Ohio's 19th District. He was reluctant to leave the army and was ordered to report to War Secretary Edwin Stanton in Washington to discuss his military future. There, Garfield met Treasury Secretary Salmon P. Chase, a fellow Ohioan, and the two became friends and political allies. Both were part of the Radical wing of the Republican Party. Chase convinced Garfield that he could do more good in Congress and Garfield took his seat in December 1863.

Throughout Garfield's extended congressional service after the Civil War, he was a supporter of the gold standard. He was a good speaker and gained a reputation as a skilled orator. At first Garfield agreed with Radical Republican views on Reconstruction, but later favored a moderate approach for civil rights enforcement for freedmen. He would serve in Congress until his nomination for President in 1880 and held a number of prestigious positions including as the Chair of the House Committees on Appropriations, Financial Services, and Military Affairs. He was implicated in the Credit Mobilier scandal of 1872, which alleged that a number of Congressmen had been given shares in the corrupt Credit Mobilier of America Company, which was building a railroad at government expense for grossly inflated prices. To secure the contract it was alleged that the company had given shares to a number of lawmakers. Suspicion surrounded Garfield's actions, but no wrongdoing was ever proven on his part.

At the 1880 Republican National Convention, Senator-elect Garfield attended as campaign manager for Secretary of the Treasury John Sherman, and gave the presidential nomination speech for him. When neither Sherman nor the two other front-runners, Ulysses S. Grant and James G. Blaine, could get enough votes to secure the nomination, delegates chose Garfield as a compromise on the 36th ballot. In the 1880 presidential election, Garfield narrowly defeated Democrat Winfield Scott Hancock. 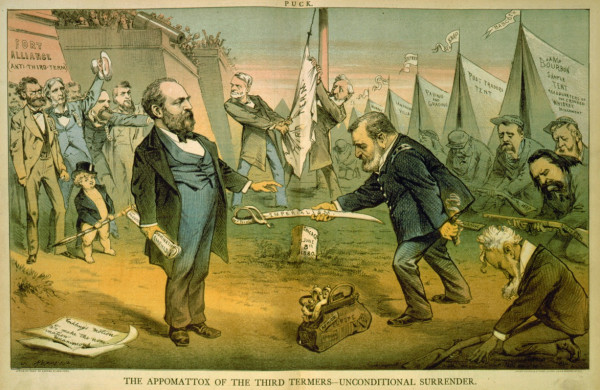 Garfield's brief term was not without some excitement. He defied the powerful New York senator Roscoe Conkling of the Stalwart faction of the Republican Party by refusing to honor the practice of senatorial courtesy (following the recommendations of his party's senators) in making presidential appointments in their state. He purged corruption in the Post Office, and appointing a U.S. Supreme Court justice. He appointing William H. Robertson to the lucrative post of Collector of the Port of New York, over Conkling's objections. When Conkling brought about a showdown by resigning from the Senate, expecting that his state government would reappoint him as a form of exoneration, Conkling lost and Garfield won. Robertson won confirmation in the senate and Conkling's resignation left Garfield with one less problem.

Garfield promoted agricultural technology, an educated electorate, and civil rights for African Americans. He also proposed substantial civil service reforms, reforms which were eventually passed by Congress in 1883 and signed into law by his successor, Chester A. Arthur, as the Pendleton Civil Service Reform Act.

On July 2, 1881, Garfield was shot at the Baltimore and Potomac Railroad Station in Washington D.C. by Charles J. Guiteau, a mentally ill office seeker. The wound was not immediately fatal for Garfield, but he died on September 19, 1881. Negligent medical treatment is seen by many as the cause of Garfield's death. Guiteau was executed for the murder of Garfield in June 1882.

Historians often forgo listing Garfield in rankings of U.S. presidents due to the short duration of his presidency. But at the time of his death, Garfield's assassination was compared to that of Lincoln, less than two decades earlier. Garfield's funeral train left Long Branch, New Jersey on the same special track that brought him there. His body was transported to the Capitol and then continued on to Cleveland for burial and over 70,000 citizens passed by Garfield's coffin as his body lay in state at the United States Capitol rotunda. On September 25, 1881, in Cleveland, over 150,000 people (a number equal to the entire population of that city) came to pay their respects. Memorials to Garfield were erected across the country. In 1884, sculptor Frank Happersberger completed a monument on the grounds of the San Francisco Conservatory of Flowers. In 1887, the James A. Garfield Monument was dedicated in Washington. Another monument, in Philadelphia's Fairmount Park, was erected in 1896. In Victoria, Australia, Cannibal Creek was renamed Garfield in his honor.

Garfield's murder by a deranged office-seeker heightened public awareness of the need for civil service reform legislation. Senator George H. Pendleton, a Democrat from Ohio, launched a reform effort that resulted in the Pendleton Act in January 1883. This act sought to end the "spoils system" in which office seekers paid for or gave political service to obtain or keep federally appointed positions. Under the act, appointments were awarded on merit and competitive examination.

In the years following his assassination, Garfield's life story was seen as an example of the American success story that even the poorest boy might someday become President of the United States. In the 1890s, Americans became disillusioned with politicians, and looked elsewhere for their heroes. Garfield's short time as president was forgotten. In the 20th century, author Thomas Wolfe wryly observed that the presidents of the Gilded Age, including Garfield, were "lost Americans whose gravely vacant and bewhiskered faces mixed, melted, swam together." The politicians of the Gilded Age faded into obscurity, lacking a Lincoln, an FDR or some other notable giant whose life had influenced America. This era was remembered as the age of the robber barons, the inventors, those who had sought social reform, and others who had lived as America rapidly changed. 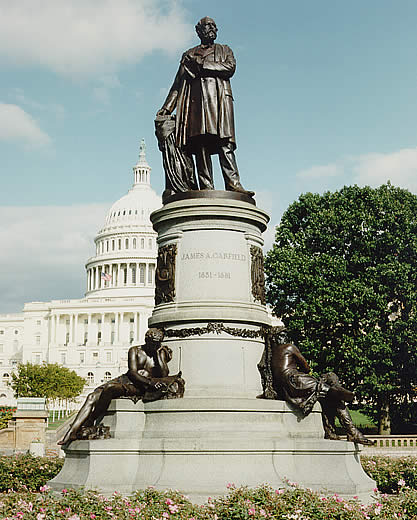 In more recent times, Garfield has enjoyed a modest resurgence of his legacy. Garfield's biographers, and those who have studied his presidency, tend to think well of him, and conclude that his presidency had a promising start before its untimely end. Historian Justus D. Doenecke wrote of Garfield's presidency that, "by winning a victory over the Stalwarts, he enhanced both the power and prestige of his office. As a man, he was intelligent, sensitive, and alert, and his knowledge of how government worked was unmatched." Ira Rutkow writes, "James Abram Garfield's presidency is reduced to a tantalizing 'what if.'" Garfield's leading biographer Alan Peskin believes Garfield deserves more credit for his political career than he has received. He writes:

"True, his accomplishments were neither bold nor heroic, but his was not an age that called for heroism. His stormy presidency was brief, and in some respects, unfortunate, but he did leave the office stronger than he found it. As a public man he had a hand in almost every issue of national importance for almost two decades, while as a party leader he, along with Blaine, forged the Republican Party into the instrument that would lead the United States into the twentieth century."

These analyses raise a difficult question: how do you rank a presidency on potential alone?
Collapse