On a scale of 1 to 10, with 10 being the highest ranking, how would you grade the performance of Andrew Johnson as President of the United States? You can go to this link to cast your vote. Andrew Johnson is another of those presidents who often dwells close to the bottom when it comes to rankings of the presidents. He was selected as Abraham Lincoln's running mate in the 1864 election when Lincoln thought it was a good idea to run on a ticket of national unity as opposed to party loyalty. Johnson was a Democrat, Lincoln was a Republican. Johnson was a southerner, Lincoln was from the north. But both believed that it was paramount that the Union be preserved at all cost, so when the 1864 election neared, Lincoln convinced his party to drop Vice-President Hannibal Hamlin from the ticket, change its name from Republican to Nation Union, and add Johnson to the ticket. Little did Lincoln know that six weeks into his term, Johnson would become President. 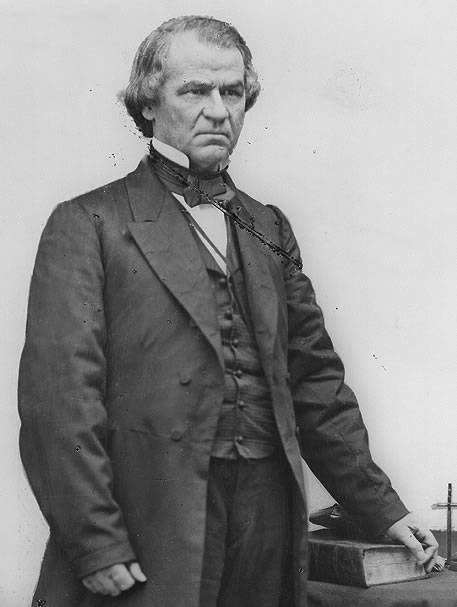 Andrew Johnson was born in Raleigh, North Carolina. His family was very poor and his father died when Andrew was three years old. When his mother remarried, it was to another poor farmer. Andrew never attended school. He was apprenticed as a tailor, but ran away from his apprenticeship. He worked in several frontier towns before settling in Greeneville, Tennessee.

From his humble origins, Johnson rose through the political ranks. He served as alderman and mayor of Greeneville before being elected to the Tennessee House of Representatives in 1835. After brief service in the Tennessee Senate, Johnson was elected to the U.S. House of Representatives in 1843, where he served five two-year terms. He became Governor of Tennessee for four years beginning in 1853, and was elected by the legislature to the U.S. Senate in 1857. While in Congress, he pressed for passage of the Homestead Bill, which was enacted soon after he left his Senate seat in 1862.

Tennessee was a southern slave states, and it seceded to join the Confederate States of America in 1861. This was something that Johnson had campaigned against. He remained firmly with the Union even after his state seceded. Johnson was the only sitting senator from a Confederate state who did not resign his seat upon learning of his state's secession. In 1862, Abraham Lincoln appointed him as military governor of Tennessee after most of it had been recaptured by Union forces.

In 1864, Lincoln picked Johnson as his running mate in the election. Johnson was a War Democrat and a southern Unionist, and Lincoln wanted to send a message of national unity in his reelection campaign. After some initial concern that he might not be re-elected, Lincoln was assisted by some wartime successes. The National Union ticket easily won the election, defeating the petulant former Union General George McClellan.

When Johnson was sworn in as vice president in March 1865, he appeared to be very drunk and gave a rambling speech, after which he secluded himself out of embarrassment. But six weeks later, the assassination of Lincoln made him President of the United States.

With the war ended, Johnson implemented his own form of reconstruction, one that drew the ire of the Radical Republicans. He issued a series of proclamations directing the seceded states to hold conventions and elections to reform their civil governments. When Southern states returned many of their old leaders, they passed Black Codes to deprive the freed former slaves of many civil liberties. Congressional Republicans refused to seat legislators from those states and advanced legislation to overrule the Southern actions, but Johnson vetoed their bills, and Congressional Republicans overrode his vetoes. This would become a pattern for the remainder of his presidency.

Johnson opposed the Fourteenth Amendment, which gave citizenship to former slaves. But he couldn't stop the tide of history. In 1866, Johnson thought he would take his case to the people. He went on a national tour promoting his executive policies and attacking his Republican opponents. His "swing around the circle" tour was a disaster.

The conflict between the branches of government grew even more. Congress passed the Tenure of Office Act, restricting Johnson's ability to fire Cabinet officials. When he persisted in trying to dismiss Secretary of War Edwin Stanton, he was impeached by the House of Representatives. Johnson narrowly avoided conviction in the Senate and removal from office. He tried and failed to win the 1868 Democratic presidential nomination and left office in 1869.

Johnson returned to Tennessee after his presidency was over. He looked for political vindication, and achieved a measure of success as he was elected to the Senate again in 1875, making Johnson the only former president to serve in the Senate. By now he was in poor health and he died months into his term.

There are some who praised Johnson for being a strict constitutionalist. But his strong opposition to federally guaranteed rights for African Americans has caused history to look back on his presidency very critically. He is regarded by many historians as one of the worst presidents in American history. In the first few decades after Johnson left office, memoirs from northerners such as former vice president Henry Wilson and Maine Senator James G. Blaine, portrayed Johnson as an obstinate boor whose Reconstruction policies favored the South. At the turn of the 20th century, his reputation was rehabilitated somewhat. Pulitzer Prize-winning historian James Ford Rhodes ascribed Johnson's faults to his personal weaknesses, and blamed him for the problems of the postbellum South. But other early 20th-century historians, such as John Burgess, Woodrow Wilson, and William Dunning, all southerners gave Johnson for trying to carry out Lincoln's plans for the South in good faith. Wilson, a future president, wrote about Reconstruction as being a vindictive program that hurt all southerners, helped northern opportunists (pejoratively called "Carpetbaggers"), and allowed cynical white southerners (called "Scalawags") to exploit alliances with African-Americans for political gain.

Another group of historians were more generous to Johnson, using Johnson's papers to support their arguments. David Miller DeWitt's The Impeachment and Trial of President Andrew Johnson, written in 1903, presented Johnson far more favorably than other contemporary historians. James Schouler's 1913 work "History of the Reconstruction Period" described Johnson's Reconstruction policies as fundamentally correct. There were a series of highly favorable biographies in the late 1920s and early 1930s that glorified Johnson and criticized his enemies. In 1948, a poll of historians conducted by Arthur M. Schlesinger deemed Johnson among the average presidents, and one conducted in 1956 by Clinton L. Rossiter assessed Johnson as one of the near-great presidents. Rossiter and others at the time saw the Reconstruction era as a time of corruption and misgovernment caused and their contemporary racist viewpoint blamed this on granting former slaves the right to vote.

In the 1950s, this point of view changed as historians began to consider the African-American experience during Reconstruction. They rejected previous claims that former slaves were somehow inferior, a point of view that had been a premise of many earlier historical works. The developing Civil Rights Movement was ushering history into a new age of enlightenment. These historians concurred with the Radical Republicans and with their desire to help African Americans. They saw Johnson as callous towards the freedman. In a number of works from 1956 onwards by such historians as Fawn Brodie, Johnson was depicted as a successful saboteur of efforts to better the freedman's lives.

In the early 21st century, Johnson is now among those commonly mentioned as the worst presidents, because of his complete mishandling of Reconstruction policy, his abrasive personality, and his misplaced ego. Johnson is blamed for having resisted Radical Republican policies aimed at securing the rights and well-being of the newly emancipated African-Americans. Johnson's biographer Annette Gordon-Reed notes that Johnson, along with his contemporaries Pierce and Buchanan, are generally listed among the five worst presidents, but concedes that, in her words, "there have never been more difficult times in the life of this nation. The problems these men had to confront were enormous. It would have taken a succession of Lincolns to do them justice." Another biographer, Hans Trefousse, describes Johnson's legacy as being rooted in "the maintenance of white supremacy." He adds, "His boost to Southern conservatives by undermining Reconstruction was his legacy to the nation, one that would trouble the country for generations to come." 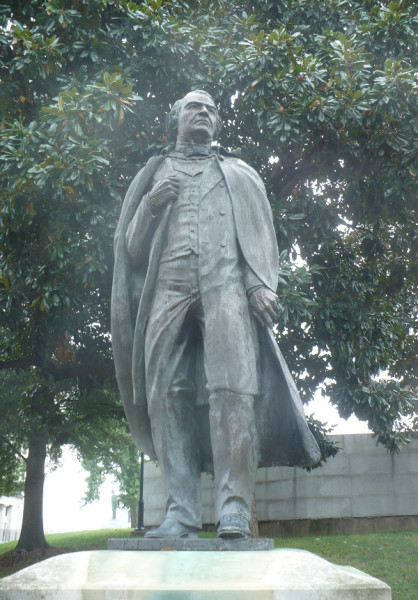 A 2018 poll of the American Political Science Association's Presidents and Executive Politics section ranked Johnson as the seventh-worst president, while a 2017 C-Span poll of historians ranked Johnson as the second-worst president. A 2006 poll of historians ranked Johnson's decision to oppose greater equality for African Americans in the aftermath of the Civil War as the second-worst mistake ever made by a sitting president. Johnson was likely the worst possible person to become President at the end of the Civil War. In the words of historian Elizabeth Varon, Johnson is remembered as "a rigid, dictatorial racist who was unable to compromise or to accept a political reality at odds with his own ideas. Most importantly, Johnson's strong commitment to obstructing political and civil rights for blacks is principally responsible for the failure of Reconstruction to solve the race problem in the South and perhaps in America as well."
Collapse