On a scale of 1 to 10, with 10 being the highest ranking, how would you grade the performance of Abraham Lincoln as President of the United States? You can go to this link to cast your vote. In rankings of presidents conducted since the 1940s, Abraham Lincoln is consistently ranked as one of the top three greatest presidents, often as number one. For example in a 2004 study, history scholars ranked Lincoln number one, while legal scholars placed him second after George Washington. Generally, in presidential ranking polls conducted after the end of the Second World War, Lincoln has been rated in first place in the majority of polls. He is almost always among the top three presidents, along with Washington and Franklin Delano Roosevelt. 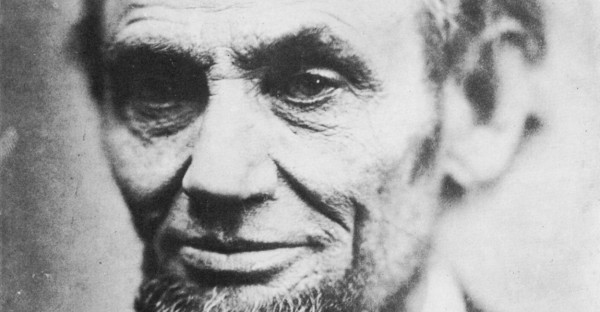 Following Lincoln's assassination, he was seen by abolitionists as a champion for human liberty. Republicans attached Lincoln as symbolic of their party. This wasn't an immediate reaction. Lincoln's American reputation grew slowly from the late 19th century until the Progressive Era, a time when he was considered to be one of America's most venerated heroes. Even Southerners began to admire him. In 1922, admiration for him grew with the dedication of the Lincoln Memorial on the National Mall in Washington, D.C. How his admirers viewed Lincoln changed with the times. In the New Deal era, liberals honored Lincoln as the champion of the common man. They claimed that Lincoln would have supported FDR's welfare state. In the Cold War years, Lincoln was seen as a symbol of freedom who brought hope to those oppressed by Communist regimes. In the 1970s Lincoln was portrayed as a hero to political conservatives for his intense nationalism, and his insistence on stopping the enslavement of others.

Not everyone was an admirer of the 16th President. By the late 1960s, some African American intellectuals rejected the notion that Lincoln was "the Great Emancipator". In fact Lerone Bennett Jr. attracted considerable attention when he called Lincoln a white supremacist in 1968, referring to times when Lincoln used ethnic slurs or told jokes that ridiculed blacks. Bennett pointed out to Lincoln wanting to send freed slaves to another country. But in 2008, President Barack Obama named Lincoln his favorite president and insisted on using Lincoln's Bible for his inaugural ceremonies.

Lincoln's image has been preserved on two denominations of United States currency, the penny and the $5 bill. His likeness also appears on many postage stamps and he has been memorialized in many town, city, and county names, including the capital city of Nebraska.He is almost always portrayed with a beard, even though he did not grow his beard until 1860 at the suggestion of 11-year-old Grace Bedell. The most famous memorials are Lincoln's sculpture on Mount Rushmore, the Lincoln Memorial, Ford's Theatre, Petersen House (where he died), the Abraham Lincoln Presidential Library and Museum in Springfield, Illinois, not far from Lincoln's home, as well as his tomb. The United States Navy Nimitz-class aircraft carrier USS Abraham Lincoln (CVN-72) is named after Lincoln, the second Navy ship to bear his name.

Lincoln was born in Kentucky and grew up on the frontier in a poor family. He was largely self-educated, and became a lawyer, earning a reputation as very capable and able. He became a leader in the Whig Party, a state legislator and a one-term Congressman. He left government to resume his law practice, but returned to politics in 1854, after becoming upset by the success of Democrats in opening the prairie lands to slavery. He became a leader in the new Republican Party and gained national attention in 1858 for a series of debates he had with Democrat Stephen A. Douglas. Although Lincoln lost his Senate campaign to Douglas, he elevated his national profile to the point where he was a viable candidate for President in 1860. He won his party's nomination and won the election on the strength of a sweep of the northern states.

Southern pro-slavery factions saw Lincoln's victory as proof that the North was rejecting the Constitutional rights of Southern states to practice slavery. The new Confederate States of America were formed and with an attack on Fort Sumter, one of the few U.S. forts in the South, the Civil War was on. Lincoln called up volunteers and militia to suppress the rebellion and restore the Union.

As the leader of the moderate faction of the Republican Party, Lincoln challenged the Radical Republicans, who demanded harsher treatment of the South. War Democrats supported his presidency, while anti-war Democrats (called Copperheads) despised him. Lincoln kept his coalition together by carefully distributing political patronage, and by appealing directly to the people. His Gettysburg Address is remembered as one of the greatest political orations in history, an iconic call for nationalism, equal rights, liberty, and democracy. He suspended habeas corpus (the right to judicial review of arrest and detention), and he prevented British intervention by defusing the Trent Affair.

Lincoln closely supervised the war effort, including the selection of generals, as well as the naval blockade that shut down the South's trade. As the war progressed, he issued the Emancipation Proclamation of 1863, something he is most remembered for, even if his motives for doing so are often misunderstood. He ordered the Army to protect escaped slaves, encouraged the border states to outlaw slavery, and pushed the the Thirteenth Amendment to the United States Constitution through Congress, which outlawed slavery across the country. Even more important than the actions themselves, was their timing. If Lincoln had moved too quickly, he would have alienated the border states and they would have joined the confederacy. If he had waited too long, nothing would have changed. 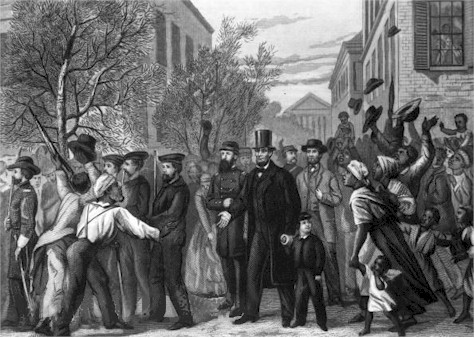 Lincoln managed his own re-election campaign. He sought to reconcile his damaged nation by avoiding retribution against the secessionists. He approved generous terms of surrender and imagined a charitable reconstruction of the nation. But a few days after the end of the war at the Battle of Appomattox Court House, Lincoln was shot and killed by John Wilkes Booth, an actor and Confederate sympathizer, on April 14, 1865. He died the following day, forever cementing Lincoln as his nation's greatest martyr.

Lincoln emphasized the Declaration of Independence as the foundation of American political values. Its emphasis on freedom and equality for all, in contrast to the Constitution's tolerance of slavery, was significant to Lincoln. In his highly influential Cooper Union speech of early 1860, Lincoln presented Americans a theory of history that stressed these values. He offered a moral basis of republicanism, as opposed to a legal one. But he also justified the war by calling the Constitution a contract, and reminded southerners that for one party to get out of a contract all the other parties had to agree.

American Presidents have died in office in 1841, 1865, 1881, 1901, 1923, 1944 and 1963. Four of these have been assassinated and two died in wartime. Lincoln remains the most beloved. Today Lincoln's legacy is claimed by conservatives and liberals alike. The former stake a claim in Lincoln's strong principled determination to preserve the Union in the face of a timidity that brought the nation as close as it has ever come to dissolution. The latter embrace Lincoln's championing of minority rights, and his charity shown towards those he defeated. It is Lincoln's embodiment of all of those principles that makes his memory endure and makes his example so important and so relevant today.

Lincoln was no saint. He was not a mindless idealist; on the contrary, a study of the man and his actions make it clear that he was first and foremost a pragmatist. He was a man of principle, to be sure, but he was practical and politically shrewd when it came to achieving those principles. For example, be believed in the rights enshrined in the Constitution, but he was not above restricting those rights when he felt doing so was necessary to achieve the greater good. He disallowed a free press when he believed that doing so would impede those seeking to break up the union. He removed the right of habeas corpus (judicial review for some of those arrested and detained) when he felt it necessary. When it looked as if he might lose a close election in 1864, he allowed leave to union soldiers in swing states so they could come home and vote for him. For Abraham Lincoln, lesser principles gave way in favor of the greater.

Political leaders have always felt the need to be practical and to make sacrifices of principle when they believe doing so to be justified. Lincoln was no different in this regard. At his core however, Lincoln held fast to certain principles. He had a hierarchy of fundamental beliefs. First among these was his belief that the Union had to be preserved. In his farewell address in the previous century, President George Washington expressed his concern that abandonment of a strong central government in favor of diverse regional interests would turn the nation into a collection of warring fiefdoms like the nations of Europe. Lincoln also held this belief. Unlike his predecessor James Buchanan, Lincoln did not believe that nothing could or should be done about secession. It was his strong belief in the core value of preserving the union, his decisiveness to take action, whether popular or not, and it is having the courage of his conviction that makes Lincoln as relevant today as he was in his time.

Throughout the destruction and carnage, Lincoln maintained his compassion, his humanity and his love of the common man. He was not vindictive and approved generous terms of peace when the defeat of the Army of Northern Virginia was imminent. It is Lincoln's magnanimity, his compassion and his empathy that are very relevant today and sorely needed. These qualities also make Lincoln relevant today. 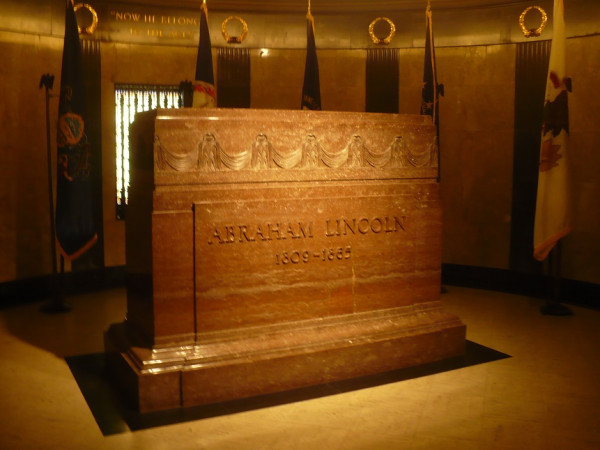 Finally, throughout what was likely the worst period in his nation's history, Lincoln maintained his humor and his his kindness. He took his job very seriously, but he did not take himself seriously. These are qualities that are crucial to strong leadership because they put people ahead of ego and personal prosperity. They are needed now perhaps more than ever. It is Lincoln's humility and his his humanity that make his legacy a lasting one.
Collapse