On a scale of 1 to 10, with 10 being the highest ranking, how would you grade the performance of Zachary Taylor as President of the United States? You can go to this link to cast your vote. In the past I have lamented the fact that Zachary Taylor doesn't really have much of a Presidential Library or Museum to speak of. While I appreciate the fact that Taylor did not serve a full term in office, there is much to be admired about the man, both for his abilities as a General, and his potential as a President. 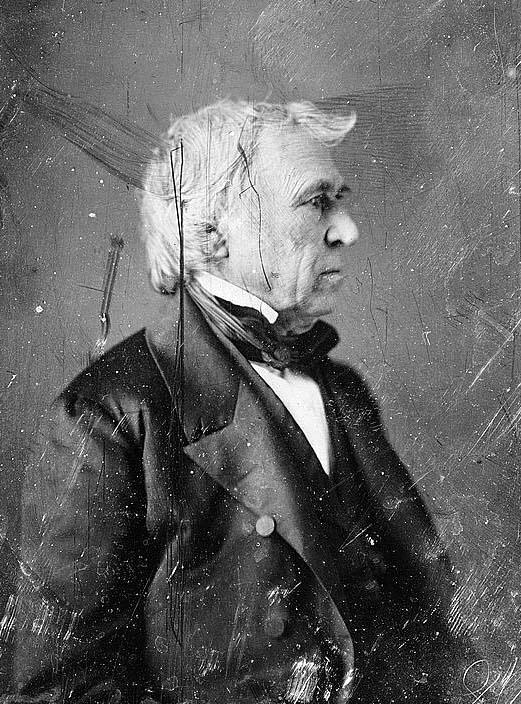 Zachary Taylor was the 12th president of the United States, serving from his inauguration March 1849 until his death in July 1850, a period of just over 16 months. Taylor had been a career officer in the United States Army, who rose to the rank of major general. He became a national hero as a result of his victories in the Mexican–American War, which made him a desirable candidate for President. Although no one knew for sure which party he belonged to, his President, James K. Polk, believed that Taylor was a Whig. Polk was correct. Taylor won election to the White House despite his vague political leanings. As President, his top priority was preserving the Union, but he died before making any progress on the hot button issue of the day, slavery. It was the issue which had been inflaming tensions in Congress and which threatened to tear the nation apart.

Taylor was born in Barboursville, Virginia three years after the end of the American Revolution. He was born into a prominent family of plantation owners who moved west, from Virginia to Kentucky when Zachary was a child. His second cousin was James Madison. Taylor joined the US Army and was commissioned as an officer in 1808. He served with distinction as a Captain in the War of 1812 and rose in the ranks in military forts along the Mississippi River. During the Black Hawk War he was promoted to Colonel in 1832. His success in the Second Seminole War attracted national attention and earned him the nickname "Old Rough and Ready".

In 1845, during the annexation of Texas, President James K. Polk dispatched Taylor to the Rio Grande, as part of a show of force in anticipation of a battle with Mexico over the disputed Texas–Mexico border. The Mexican–American War broke out in April 1846, and Taylor defeated Mexican troops commanded by General Mariano Arista at the battles of Palo Alto and Resaca de la Palma, despite being outnumbered in both battles. Taylor then led his troops into Mexico, where they defeated Mexican troops at the Battle of Monterrey. Contrary to his orders, he led his troops further south and, despite being severely outnumbered, dealt a crushing blow to Mexican forces under Antonio López de Santa Anna at the Battle of Buena Vista. Polk felt threatened by the popularity that came with Taylor's success. He had Taylor's troops transferred to the command of Major General Winfield Scott. In spite of this, Taylor remained a very popular general, both with his troops and with the general public.

Both parties considered Taylor as a presidential candidate because nobody was sure which party Taylor supported. History suggests that as a good soldier, Taylor supported whoever his commander in chief was, and is is believed that he had never even voted. It was the Whig Party that was able to convince Taylor to lead their ticket in the 1848 presidential election, despite knowing what Taylor really stood for. At the 1848 Whig National Convention, Taylor defeated Scott and former Senator Henry Clay to win the nomination. He won the general election on a ticket with New York politician Millard Fillmore, defeating Democratic Party candidates Lewis Cass and William Orlando Butler, as well as a third-party effort led by former president Martin Van Buren and Charles Francis Adams, Sr. of the Free Soil Party. Taylor became the first president to be elected without having ever served in a prior political office.

As president, Taylor refused to be led by Henry Clay and the other Whigs in Congress, at a time when partisan tensions threatened to divide the Union. A debate was raging over the status of slavery in the territory acquired in the Mexican War. Southerners threatened to secede if slavery was not permitted in the territories. Despite being a Southerner and a slaveholder himself, Taylor did not support the expansion of slavery. He was a union man who saw as his goal that of keeping the nation united. To avoid the contentious issue of slavery, he urged settlers in New Mexico and California to bypass the territorial stage and draft constitutions for statehood.

In Congress, the Compromise of 1850 was being debated and proposed, something that Taylor was not entirely pleased with. But before he could confront the issue, he died suddenly of a stomach-related illness in July 1850. In his brief time in office, his administration's greatest accomplishment was probably the ratification of the Clayton–Bulwer Treaty, an accord between the US and Great Britain on a future canal through Central America.

Historians and scholars have ranked Taylor in the bottom quartile of U.S. presidents,mostly due to his short term of office. The Clayton–Bulwer Treaty affecting relations with Great Britain in Central America is viewed as an important step building on strong relations between the two nations and averting possible future confrontation in Latin America. Although historical rankings of Presidents have generally placed Taylor in the bottom quarter percentile, most surveys tend to rank him as the most effective of the four presidents from the Whig Party. Taylor was the last president to own slaves while in office. He was also the second president to die in office, preceded by William Henry Harrison, who died while serving as president nine years earlier.

In 1883, the Commonwealth of Kentucky placed a 50-foot monument topped by a life-sized statue of Taylor near his grave. During the 1920s, the Taylor family commenced work to turn the Taylor burial grounds into a national cemetery. The Commonwealth of Kentucky donated two adjacent parcels of land for the project, turning the half-acre Taylor family cemetery into 16 acres. On May 6, 1926, the remains of Taylor and his wife (who died in 1852) were moved to the newly constructed Taylor mausoleum. The cemetery property has been designated as the Zachary Taylor National Cemetery. That's as close as Taylor has come to having any sort of a Presidential Museum.

Several places around the United States are named after Taylor, including: Camp Taylor in Kentucky and Fort Zachary Taylor in Florida; The SS Zachary Taylor, a World War II Liberty ship; Zachary Taylor Parkway in Louisiana; Zachary Taylor Hall at Southeastern Louisiana University. There are Taylor Counties named after him in Georgia, Iowa and Kentucky. The town of Rough and Ready, California is named for him as are the Zachary Taylor Highway in Virginia and Taylor, Michigan. He has no connection with the naming of Taylor Swift or Taylor Lautner. 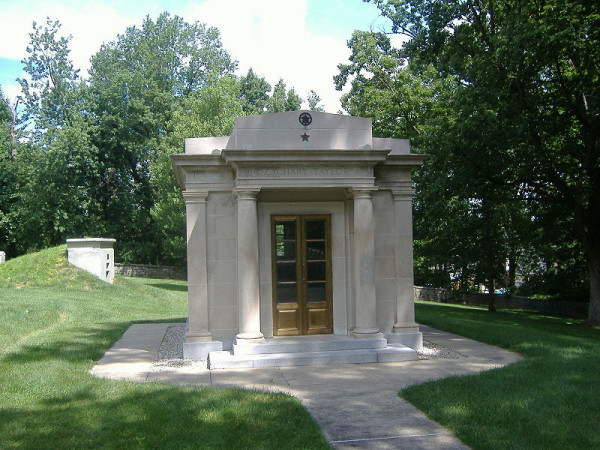 Almost immediately after his death, rumors began to circulate that Taylor was poisoned by pro-slavery Southerners. These rumors became a part of Taylor's legacy and persisted into the 21st century. In 1978, Hamilton Smith postulated his assassination theory, based on the lack of confirmed cholera outbreaks, and other material. In the late 1980s, Clara Rising, a former professor at University of Florida, persuaded Taylor's closest living relative to agree to an exhumation so that his remains could be tested. Taylor's remains were exhumed and transported to the Office of the Kentucky Chief Medical Examiner on June 17, 1991. Samples of hair, fingernail, and other tissues were removed, and radiological studies were conducted. The remains were returned to the cemetery and reinterred, with appropriate honors, in the mausoleum. Neutron activation analysis conducted at Oak Ridge National Laboratory revealed no evidence of poisoning, as arsenic levels were too low. The analysis concluded Taylor had contracted "cholera morbus, or acute gastroenteritis", and that his food or drink was likely contaminated by harmful bacteria. Any hope for Taylor's recovery was likely prevented because of the quackery of his doctors, who treated him with "ipecac, calomel, opium, and quinine" at 40 grains per dose (approximately 2.6 grams). They also "bled and blistered him." Despite this, the rumors that Taylor was poisoned persist.
Collapse