On a scale of 1 to 10, with 10 being the highest ranking, how would you grade the performance of Martin Van Buren as President of the United States? You can go to this link to cast your vote. Martin Van Buren is not as well remembered as the seven men who held the job of President of the United States before him. In recent times, when he has been remembered at all, it has been as the butt of some joke, such as when the character Kramer, in the comedy TV show Seinfeld, spoke of a street gang known as the "Van Buren Boys" that admired Van Buren and how their secret sign was holding eight fingers (Van Buren was the 8th President). During the 1988 presidential campaign, George H. W. Bush, a Yale University graduate and member of the Skull and Bones secret society, was attempting to become the first incumbent vice president to win election to the presidency since Van Buren. The story line in the comic strip Doonesbury had members of Skull and Bones as attempting to rob Van Buren's grave, in order to use the relics in a ritual that would aid Bush in the election. Van Buren was also the subject of a popular Google Search ad aired during the 2013 Super Bowl. 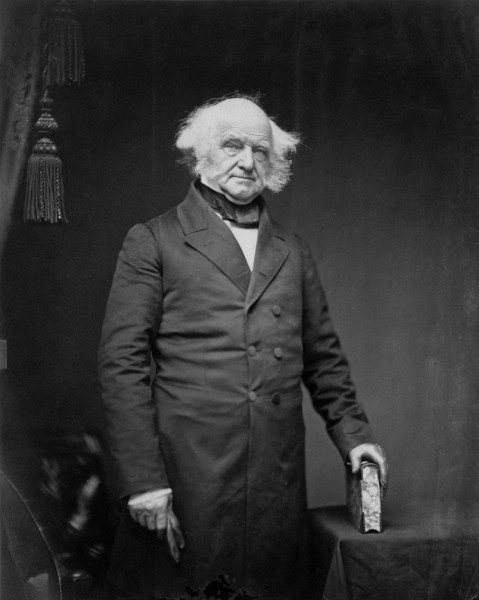 Even in his own time, at the end of his first term in office, his opponents wrote a campaign song entitled "Tippecanoe and Tyler Too" about the Whig candidates running against Van Buren. The song portrayed Van Buren as an out of touch aristocrat, referring to the President as "Little Van" and claiming that "Van is a used-up man." Perhaps the best Van Buren achieved was when he was portrayed by Nigel Hawthorne in the 1997 film Amistad. The film depicts the controversy and legal battle surrounding the status of slaves who in 1839 rebelled against their transporters on La Amistad slave ship. But even then, Van Buren is portrayed as frustrated and too ineffective to get the Supreme Court to rule as he would like. 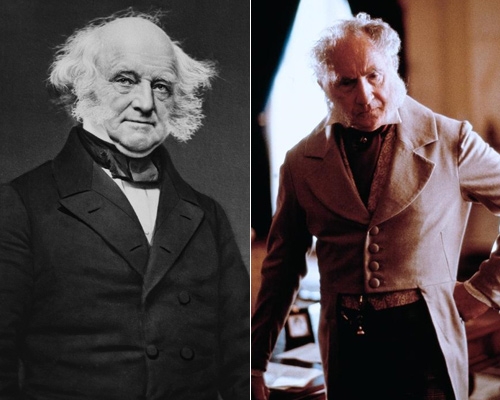 Van Buren's presidency is generally considered as below average by historians. His time in office was dominated by the economic disaster known as the Panic of 1837. Van Buren's greatest and most lasting achievement was as a political organizer who built the Democratic Party and guided it to dominance in the Second Party System. A 2017 C-SPAN survey ranked Van Buren among the bottom third of presidents of all-time. Van Buren was ranked 34th among all former presidents. Worse yet, several polls have included Van Buren among the nation's most obscure presidents. A 2014 Time Magazine article on the "Top 10 Forgettable Presidents" said of Van Buren: "his was the first truly forgettable American presidency."

Van Buren was born in Kinderhook, New York to a family of Dutch Americans, and he was the first president to have a first language that was not English. His father was a Patriot during the American Revolution. Van Buren was raised speaking Dutch and learned English at school. He trained as a lawyer and became very active in politics as a member of the Democratic-Republican Party. He won election to the New York State Senate and became the leader of the Bucktails, the faction of Democratic-Republicans opposed to Governor DeWitt Clinton.

Van Buren established a political machine known as the Albany Regency and in the 1820s emerged as the most influential politician in his home state. He was elected to the United States Senate in 1821 and supported William H. Crawford in the 1824 presidential election. John Quincy Adams won the 1824 election and Van Buren opposed his proposals for federally funded internal improvements and other measures.

Van Buren supported Andrew Jackson's candidacy against Adams in the 1828 presidential election. To support Jackson's candidacy, Van Buren ran for Governor of New York and resigned a few months after assuming the position to accept appointment as U.S. Secretary of State after Jackson took office in 1829. Van Buren was a key advisor during Jackson's presidency. He built the organizational structure for the coalescing Democratic Party, particularly in New York.

When the Pettycoat Affair caused a rift between Jackson and most of his cabinet, Van Buren resigned from his position and then briefly served as the U.S. ambassador to the United Kingdom. At Jackson's urging, the 1832 Democratic National Convention nominated Van Buren for Vice President of the United States, and he took office after the Democratic ticket won the 1832 presidential election. With Jackson's strong support, Van Buren faced little opposition for the presidential nomination at the 1835 Democratic National Convention, and he defeated several Whig opponents in the 1836 presidential election.

The Panic of 1837 hit as a result of Jackson refusal to renew the charter of the Bank of the United States. Van Buren responded to the crisis with his Independent Treasury system, a plan under which the federal government would store its funds in vaults rather than in banks. Van Buren continued Jackson's policy of Indian removal. He denied the application to admit Texas to the Union, seeking to avoid heightened sectional tensions. In the 1840 election, the Whigs ridiculed Van Buren as "Martin Van Ruin", and he was defeated in his bid for re-election.

At the opening of the Democratic convention in 1844, Van Buren was the leading candidate for the party's nomination for the presidency. But southern Democrats were angered by his continued opposition to the annexation of Texas, and the party nominated James K. Polk. Van Buren grew increasingly opposed to slavery after he left office, and he agreed to lead a third party ticket in the 1848 presidential election, but finished a distant third in the election. Van Buren returned to the Democratic fold after the 1848 election, but he supported Abraham Lincoln's policies during the American Civil War. His health began to fail in 1861 and he died in July 1862 at age 79. 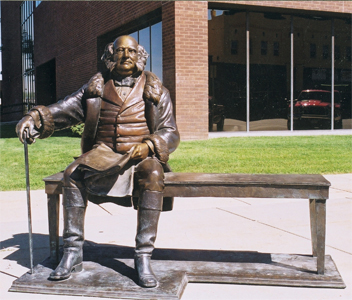 Van Buren's home in Kinderhook, New York, called Lindenwald, is now the Martin Van Buren National Historic Site. Counties are named for Van Buren in Michigan, Iowa, Arkansas, and Tennessee. A mountain, a ship, three state parks and numerous towns were named after him. Any popularity he had in his legacy was reduced as a result of his being anchored to Jackson and the deplorable Indian Removal Act that led to the Trail of Tears.
Collapse