On a scale of 1 to 10, with 10 being the highest ranking, how would you grade the performance of Andrew Jackson as President of the United States? You can go to this link to cast your vote.Andrew Jackson's historical legacy and reputation has gone on a roller coaster trajectory through the years since he left office. He is alternately remembered as the hero of New Orleans, the great democrat who appealed to the common man, a successful populist, an icon of the Democratic Party, the enemy of the nullifiers, and more recently as the man who set in motion the Trail of Tears. His face appears on the twenty dollar bill, against the wishes of many indigenous Americans. 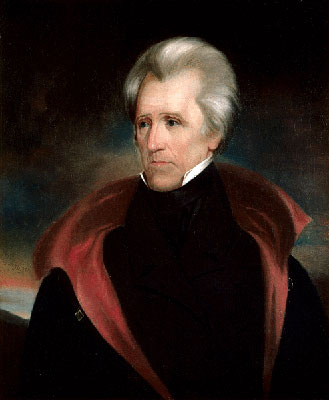 More recently, President Donald Trump has praised Jackson in various remarks and Tweets. President Trump has even placed a portrait of Jackson in the Oval Office and made a pilgrimage to the Jackson’s tomb in Nashville less than two months after being sworn in. Jackson remains one of the most controversial figures in American history. Jackson's masterful personality caused significant controversy during his own time, and since his death there has never been universal agreement on Jackson's legacy. Jackson was always a fierce partisan, with many friends and many enemies, and so it goes with opinions today about how Jackson should be remembered. James Parton was the first man after Jackson's death to write a full biography of him. In attempting to reconcile the various contradictions about Jackson, Parton wrote:

"Andrew Jackson, I am given to understand, was a patriot and a traitor. He was one of the greatest generals, and wholly ignorant of the art of war. A brilliant writer, elegant, eloquent, without being able to compose a correct sentence or spell words of four syllables. The first of statesmen, he never devised, he never framed, a measure. He was the most candid of men, and was capable of the most profound dissimulation. A most law-defying law-obeying citizen. A stickler for discipline, he never hesitated to disobey his superior. A democratic autocrat. An urbane savage. An atrocious saint."

Jackson was born in the colonial Carolinas (no one is truly sure if it was North or South - the answer depended on which was to Jackson's political advantage.) He was born into a Scotch-Irish family in the decade before the American Revolutionary War. As a boy during the war he was captured by the British, scarred by a British officer, rescued by his mother just before her death, and came to hate the British with a passion. Jackson became a frontier lawyer and married Rachel Donelson Robards. He served briefly in the United States House of Representatives and the United States Senate, representing Tennessee. After resigning, he served as a justice on the Tennessee Supreme Court from 1798 until 1804.

Jackson purchased a property later known as The Hermitage, and became a wealthy, slave-holding planter. In 1801, he was appointed colonel of the Tennessee militia and was elected its commander the following year. He commanded troops during the Creek War of 1813–1814, winning the Battle of Horseshoe Bend. The subsequent Treaty of Fort Jackson required the Creek surrender of vast lands in present-day Alabama and Georgia. In the War of 1812 Jackson's victory in 1815 at the Battle of New Orleans made him a national hero. Jackson then led U.S. forces in the First Seminole War, which led to the annexation of Florida from Spain.

Jackson briefly served as Florida's first territorial governor before returning to the Senate. He ran for president in 1824, winning a plurality of the popular and electoral vote. As no candidate won an electoral majority, the House of Representatives elected John Quincy Adams in a contingent election. He attributed his loss to a "corrupt bargain" between Adams and Henry Clay and never forgave either man.

Jackson's supporters founded the Democratic Party and Jackson ran again in 1828, defeating Adams in a landslide. Jackson faced the threat of secession by South Carolina over what opponents called the "Tariff of Abominations." The crisis was defused when the tariff was amended, and Jackson threatened the use of military force if South Carolina attempted to secede. In Congress, Henry Clay led the effort to reauthorize the Second Bank of the United States. Jackson saw the Bank as a corrupt institution. He vetoed the renewal of its charter. After a lengthy struggle, Jackson and his allies thoroughly dismantled the Bank. In 1835, Jackson became the only president to completely pay off the national debt, fulfilling a longtime goal.

Jackson's presidency marked the beginning of the ascendancy of the party "spoils system" in American politics. In 1830, Jackson signed the Indian Removal Act, which forcibly relocated most members of the Native American tribes in the South. Many indigenous people died in the forced march from their homes.

In foreign affairs, Jackson's administration concluded a "most favored nation" treaty with Great Britain, settled claims of damages against France from the Napoleonic Wars, and recognized the Republic of Texas. In January 1835, he survived the first assassination attempt on a sitting president.

In his retirement, Jackson remained active in Democratic Party politics, supporting the presidencies of Martin Van Buren and James K. Polk. Though fearful of its effects on the slavery debate, Jackson advocated the annexation of Texas, which was accomplished shortly before his death. Jackson supporters came to admire him for his support for democracy and of the common man. They also admired him for being decisive

In his own time Jackson was criticized by Alexis de Tocqueville in his famous work "Democracy in America". The author wrote:

"The President belongs to the party which is desirous of limiting that power to the clear and precise letter of the Constitution, and which never puts a construction upon that act favorable to the government of the Union. Far from standing forth as the champion of centralization, General Jackson is the agent of the state jealousies; and he was placed in his lofty station by the passions that are most opposed to the central government. It is by perpetually flattering these passions that he maintains his station and his popularity. General Jackson is the slave of the majority. He yields to its wishes, its propensities, and its demands... General Jackson stoops to gain the favor of the majority; but when he feels that his popularity is secure, he overthrows all obstacles in the pursuit of the objects which the community approves or of those which it does not regard with jealousy."

In the last century, Jackson was praised by many admirers such as historian Arthur M. Schlesinger Jr. (author of "The Age of Jackson"). More recently, in the latter part of the 20th century, Robert Remini published a favorable three-volume biography of Jackson followed by an abridged one-volume study. Remini calls Jackson "the embodiment of the new American". 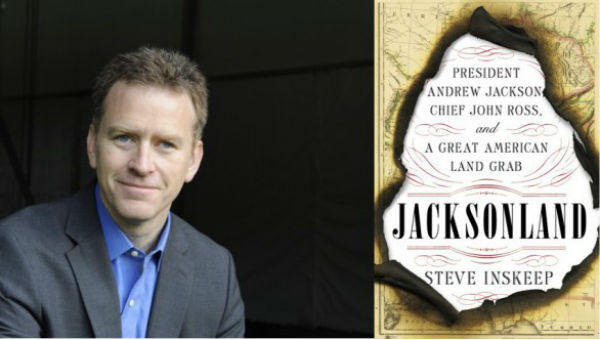 But it was Jackson's initiatives in addressing the conflicts between indigenous people and American settlers that is a major source of controversy. Earlier biographers defended Jackson's removal of the "Five Civilized Tribes". Remini claimed that, if not for Jackson's policies, the Southern tribes would have been totally wiped out. More recent authors such as Steve Inskeep, author of the 2015 work Jacksonland: President Andrew Jackson, Cherokee Chief John Ross, and a Great American Land Grab (reviewed here in this community) disagree. Inskeep sees what had occurred as southerners' coveting land belonging to the Cherokee and other first nations, and greedy land speculators and politicians (Andrew Jackson falling in both categories) sacrificing principle for greed.

Jackson has long been honored, along with Thomas Jefferson, in the Jefferson–Jackson Day fundraising dinners held by state Democratic Party organizations to honor the two men whom the party regards as its founders. Because both Jefferson and Jackson were slave owners, and because of Jackson's Indian removal policies, many state party organizations have renamed the dinners.

In spite of this controversial legacy, Jackson's performance in office has generally been ranked as above average. C-SPAN's ranking of Presidents saw him place 13th in 2009 and 18th in 2017. 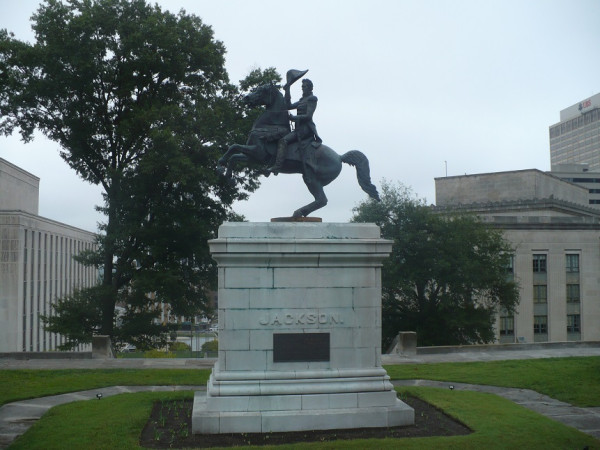 Jackson's image has appeared on U.S. banknotes as far back as 1869, on the $5, $10, $20 and $10,000 note. Most recently, his image has appeared on the U.S. $20 Federal reserve note beginning in 1928. In 2016, Treasury Secretary Jack Lew announced his goal that by 2020 an image of Harriet Tubman would replace Jackson's depiction on the front side of the $20 banknote, and that an image of Jackson would be placed on the reverse side, though this decision has not become final. During the Civil War, the Confederate government issued two Confederate postage stamps bearing Jackson's portrait, one a 2-cent red stamp and the other a 2-cent green stamp, both issued in 1863.
Collapse