On a scale of 1 to 10, how would you grade James Monroe's performance as President? Monroe might be the most under-rated President. If he had a theme song, it might be "anything you can do, I can do better" because he led such an accomplished life, and yet people know so little about him. They are even misinformed on some of the things they think they know about him. When most people think of James Monroe, if they think of him at all, it is for the doctrine that bears his name. Many people claim that the Monroe Doctrine is really the work of his Secretary of State, John Quincy Adams. Still, there is much to admire about the 5th President of the United States. When the trivia question is posed: which two-term President was wounded in war, sat in Congress, was Governor of his state as well as it's US Senator, held two cabinet posts, was Ambassador to France and England, and won re-election by near acclamation, most people are stumped. The man accomplished a lot. To give him your grade, go to this link.

Monroe was born into a planter family in Westmoreland County, Virginia. But it was not a wealthy family, especially after his father died when young James was just a teenager. He was able to attend school with help from a rich uncle, but he dropped out to serve in the Continental Army during the American Revolutionary War. After crossing the Delaware as part of George Washington's army, Monroe was wounded at the Battle of Trenton and nearly died, but was saved by the timely intervention of a surgeon who had happened to accompany the unit that Monroe was in at the last minute.

After studying law under Thomas Jefferson from 1780 to 1783, Monroe served as a delegate in the Continental Congress. As a delegate to the Virginia Ratifying Convention, Monroe opposed the ratification of the United States Constitution. He lost an election to the first US Congress to his friend (and later his boss) James Madison. In 1790, he won election to the Senate, where he became a leader of the Democratic-Republican Party. He left the Senate in 1794 to serve as President George Washington's ambassador to France, but was recalled by Washington in 1796. Monroe won election as Governor of Virginia in 1799.

Monroe was appointed as President Thomas Jefferson's special envoy to help negotiate the Louisiana Purchase, through which the United States nearly doubled in size. Monroe unsuccessfully challenged Madison in the 1808 presidential election, but in April 1811 he joined Madison's administration as Secretary of State. During the later stages of the War of 1812, Monroe simultaneously served as Madison's Secretary of State and Secretary of War. His war-time leadership established him as Madison's heir apparent, and he easily defeated Federalist Party candidate Rufus King in the 1816 presidential election.

Monroe's presidency ushered in what became known as the Era of Good Feelings, as the Federalist Party collapsed as a national political force. Rather than gloat, Monroe embarked on a goodwill tour, going into the heart of enemy political territory to let New Englanders known that he was President of all the people. He was very well received.

As president, Monroe signed the Missouri Compromise, which admitted Missouri as a slave state and banned slavery from territories north of the parallel 36°30′ north. In foreign affairs, Monroe and Secretary of State John Quincy Adams favored a policy of conciliation with Britain and a policy of expansionism against the Spanish Empire. In the 1819 Adams–Onís Treaty with Spain, the United States secured Florida and established its western border with New Spain.

Monroe was re-elected in 1820, with every electoral vote, save for one faithless elector who decided to cast his vote for John Quincy Adams. According to some versions, the elector did this so that George Washington would retain the honor of being the only President to win the presidency by capturing all electoral votes. (Others say that the guy just didn't like Monroe). In 1823, Monroe announced the United States' opposition to any European intervention in the recently independent countries of the Americas with what became known as the Monroe Doctrine. This pronouncement has become a landmark in American foreign policy. Monroe was also a member of the American Colonization Society, which supported the colonization of Africa by freed slaves. Liberia's capital of Monrovia is named in his honor.

Following his retirement in 1825, Monroe left office a poorer man than when he entered it. He was plagued by financial difficulties and was forced to sell his Virginia property and move in with his daughter and her husband in New York. He died in New York City on the 4th of July in 1831.

Though he lived in the shadow of men like Washington, Adams, Jefferson and Madison, James Monroe presided over a pivotal period in United States history, as the nation began to turn away from European affairs and focus more on domestic issues. His presidency saw the United States settle many of its longstanding boundary issues through an accommodation with Britain and the acquisition of Florida. Monroe also helped resolve sectional tensions for the time being through his support of the Missouri Compromise and by seeking support from all regions of the country. Through the looking glass of hindsight, Monroe presents as a more effective executive than some of his better-known predecessors. Sadly, many just remember him for his old-world style of dress, as the last President to wear a powdered wig tied in a queue, a tricorne hat and knee-breeches. 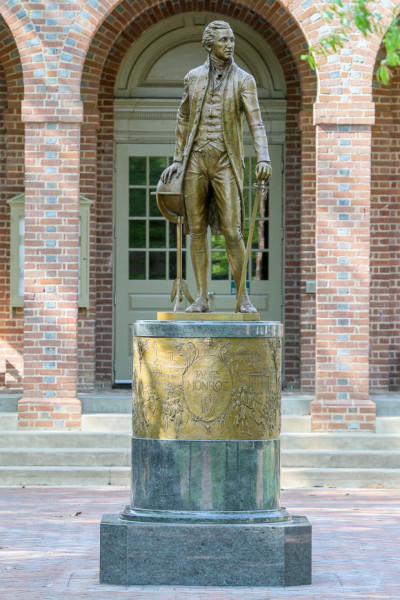 Polls of historians and political scientists tend to rank Monroe as an above average president. A 2018 poll of the American Political Science Association’s Presidents and Executive Politics section ranked Monroe as the eighteenth best president, while a 2017 C-Span poll of historians ranked Monroe as the thirteenth best president. A ranking of the Presidents by members of this community conducted in 2012 ranked Monroe much higher at number 7. None of that really matters today. What matters most is how you would rank him, so don't forget to go to the link in the first paragraph and give James Monroe your own grade.
Collapse