On a scale of 1 to 10, how would you grade John Adams as President? There is much to be said for the man who was mocked as pompous by his contemporaries as "His Rotundity". In his single term as President he continued Washington's policy of neutrality in European wars and rebuilt the US Navy and guided the nation through the "Quasi-War". A black mark against his presidency is his passage of the Alien and Sedition Acts as a means of controlling critics of the government and stifling free speech. He appointed judges after his defeat in an attempt to continue Federalist Party control of the courts. Perhaps his greatest legacy is that he was personally opposed to slavery, and was the only one of the early Presidents not to be a slaveholder. His legacy will be discussed in more detail below, but in the meantime, you can go to this link to give him his grade.

Benjamin Franklin summed up what many of his contemporaries thought of Adams with this comment: "He means well for his country, is always an honest man, often a wise one, but sometimes, and in some things, absolutely out of his senses." John Adams, the second President of the United States, and its first Vice-President, had the courage to go against the flow politically when he thought that it was the right thing to do. This did not make his popular, especially during his time, but by doing so he has left a legacy as the quintessential honest politician, and as someone who had the courage of his convictions. 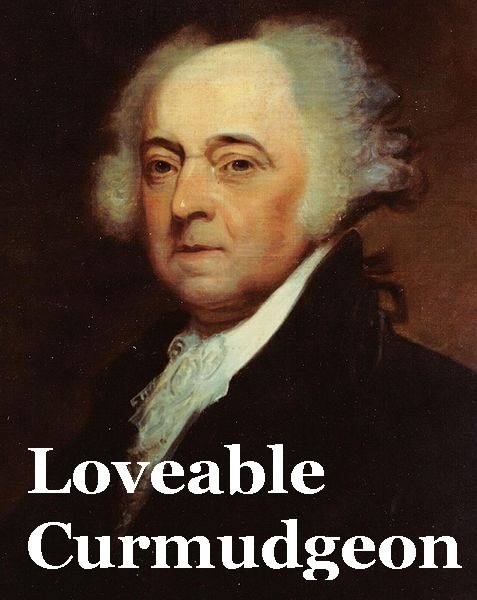 Adams was a lawyer, a diplomat, a writer, an abolitionist and a Founding Father. He was a leader of American independence from Great Britain. He was a faithful diarist and correspondent with his wife Abigail. Long before the time when such behavior would come to be expected, he treated his spouse as an equal and as a trusted adviser. Their correspondence remains an important historical record of the era and its issues.

Adams was a political activist even prior to the American Revolution. Once again before these notions became prevalent in legal thinking, Adams was devoted to the right to counsel for accused persons and to the presumption of innocence. Placing principle before personal popularity, he courageously defended British soldiers against murder charges arising from the Boston Massacre. His honesty and principled conduct caused his state of Massachusetts to choose him as a delegate to the Continental Congress and in that role he became a principal leader of the Revolution. Adams assisted in drafting the Declaration of Independence in 1776. He was content to offer wise guidance, without the need for personal acclaim as its front man. (If the musical 1776 has any resemblance to history, and perhaps it does, Adams did not want to be the main author of the document because if he did, the other delegates would "run their quill pens through it!") When the Declaration was written, Adams was its biggest advocate in Congress. 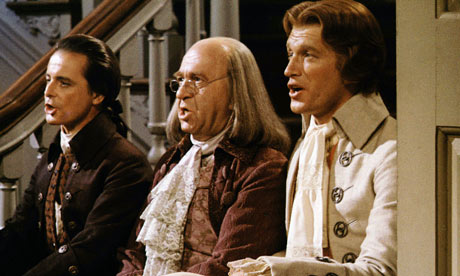 As a diplomat in Europe, Adams helped negotiate the peace treaty with Great Britain and secured necessary governmental loans. He was the primary author of the Massachusetts Constitution in 1780, which later influenced the United States' own constitution. His "Thoughts on Government" record the considerations of a brilliant political theorist.

Adams was elected to two terms as vice president under George Washington. He was then elected president in 1796; during his single term, he had to deal with fierce criticism from the Jeffersonian Republicans, as well as from some in his own Federalist Party. Perhaps the one black mark on his record is that he supported the controversial Alien and Sedition Acts, a controversial limit on free speech. It was a measure he considered necessary at a time when his nation was involved in an undeclared "Quasi-War" with France. The main accomplishment of his presidency was a peaceful resolution of this conflict. Adams had the wisdom to realize that his nation was not ready for another war with a major world power.

Adams was the first president to reside in the executive mansion now known as the White House. Today his blessing on the residence is engraved in the mantel in the State Dining Room. It reads, “I Pray Heaven To Bestow The Best Of Blessings On This House And All that shall hereafter Inhabit it. May none but Honest and Wise Men ever rule under This Roof.” These words are from a letter he wrote to Abigail in 1800 and were engraved on the mantel in 1945 during the administration of Franklin D. Roosevelt.

Adams did not win re-election, the result of a combination of accusations of despotism from Republicans led by his former friend Thomas Jefferson, as well as a split in his own party. He retired to Massachusetts. Adams eventually resumed his friendship with Jefferson by initiating a correspondence that lasted fourteen years. He and his wife were the progenitors of a family of politicians, diplomats, and historians now referred to as the Adams political family. It included their son John Quincy Adams, the sixth president of the United States.

John Adams died on the fiftieth anniversary of the adoption of the Declaration of Independence, hours after Jefferson's death. Surveys of historians and scholars have favorably ranked his administration. More so, Adams legacy is that of someone who has come to be seen as a leader with a long, distinguished, and spotless career in public service, and a man of great patriotism and integrity. His downfall was his stubbornness, and cantankerousness, which often got him into troubles that other politicians might have avoided using a little tact. But these same qualities have caused Adams to be considered by many as the most independent-minded of the Founders. Even though he formally aligned with the Federalists, he was really a "party of one". Sometimes he disagreed with the Federalists as much as he did the Republicans.

An adjective often used to describe Adams is "prickly". But his tenacity really was indicative of strong political courage. Adams was not afraid to stick to his principles in the face of universal opposition. Adams was, by his own admission, very combative sometimes, and this diminished the esteem he was held in by his contemporaries. As he admitted in his later years, "I refused to suffer in silence. I sighed, sobbed, and groaned, and sometimes screeched and screamed. And I must confess to my shame and sorrow that I sometimes swore." Stubbornness was one of his defining traits, and for this Adams made no apology. He wrote, "Thanks to God that he gave me stubbornness when I know I am right." Though his adherence to principle is admirable, it was not always a political asset. For example, his resolve to advance peace with France, while maintaining a posture of defense, lost support from both sides and reduced his popularity. The wisdom of his stance was not immediately appreciated and no doubt contributed to his defeat for reelection. It was only years later that historians came to appreciate him for avoiding an all-out war with France during his presidency.

Adams' political philosophy was "out of step" with the way that political thought in the nation was moving. The political flavor of the month was the Jeffersonian view of liberty and a weak central government. As Jeffersonianism and later Jacksonian democracy grew to become the central theme in American politics, Adams was largely forgotten. When his name was mentioned, it wasn't flattering. For example, in the 1840 presidential election, Whig candidate William Henry Harrison was attacked by Democrats on the false allegation that he had once been a supporter of John Adams. Years later, during the Civil War, Confederates would remember Adams as a symbol of Yankee arrogance and snobbery.

Today Adams reputation has enjoyed somewhat of a revival, due in large measure to David McCullough's prize-winning biography of Adams, and the HBO series that was based on the book. But Adams still remains less well respected than many of America's other Founding Fathers. As David McCullough puts it: "The problem with Adams is that most Americans know nothing about him." Most Americans, if they think of Adams at all, remember him as the President who served a single term between Washington and Jefferson. He does not have the sexiness that Alexander Hamilton has gained from the musical that glorifies him. A proposal to build a memorial to Adams in the nation's capitol has struggled and stalled, despite Adams' lengthy career in public service and his legacy of integrity, honesty and dedication to principle. Adams remains overshadowed by the dramatic military and political achievements and powerful personalities of his contemporaries. 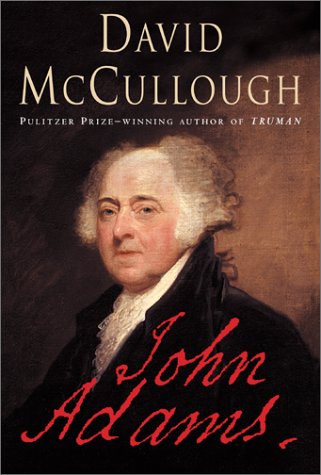 Today Adams is commemorated as the namesake of a number of counties, buildings, and other memorials. The John Adams Building of the Library of Congress is an institution whose existence Adams had signed into law. But unlike many other Founders, Adams still does not have a monument dedicated to him in Washington, D.C. As David McCullough puts it, "Popular symbolism has not been very generous toward Adams. There is no memorial, no statue in his honor in our nation's capital, and to me that is absolutely inexcusable. It's long past time when we should recognize what he did, and who he was."
Collapse