Today we begin the first in our series in which we ask you to give each President a grade from 1 to 10 (the highest rating) based on how each performed his duties in the office of the Presidency. Today we begin with George Washington. To vote, you can go to this link, where the poll will be open for the next five days. But first, let's look at Washington's record.

Henry Lee III was a Major General in the Revolutionary War, the 9th Governor of Virginia, and the father of the American Civil War general Robert E. Lee (better known as "Light Horse Harry") was given the honor of delivering the eulogy at George Washington's funeral. Lee famously said of his former comrade in arms, that Washington was "First in war, first in peace, and first in the hearts of his countrymen." Lee went on to say of Washington:

"He was second to none in humble and enduring scenes of private life. Pious, just, humane, temperate, and sincere; uniform, dignified, and commanding; his example was as edifying to all around him as were the effects of that example lasting. Correct throughout, vice shuddered in his presence and virtue always felt his fostering hand. The purity of his private character gave effulgence to his public virtues. Such was the man for whom our nation mourns."

This eloquent and amazing tribute is indicative of the esteem that Washington had been held in throughout history since his passing. No president will ever be accused of achieving perfection, but Washington is probably the one who most closely approached that standard. His biographers have constantly stressed the man's character. For example, Douglas Southall Freeman, the author of a seven volume biography of Washington published between 1948 and 1957, wrote: "the great big thing stamped across that man is character." More recently, David Hackett Fischer, author of the Pulitzer Prize winning book Washington's Crossing (reviewed here in this community, noted that by character, "Freeman meant integrity, self-discipline, courage, absolute honesty, resolve, and decision, but also forbearance, decency, and respect for others."

Washington set many precedents for the national government and for the presidency. Washington's precedent of a president sitting for only two terms was generally followed until 1940 when Franklin Delano Roosevelt was elected to a third consecutive term. It did not become a constitutional requirement until 1951 when the unwritten rule set by Washington became the 22nd Amendment to the Constitution. Washington also set constitutional precedent by being the first president to use the Presidential Veto. He was the first to select a cabinet. Sadly not all of Washington's desires for good government stuck. Despite his wishes that there be no partisan factions in government, it was on his watch that the first two political parties (Federalists and Jeffersonian Republicans) were formed.

It was in 1778 that the first recorded writing referred to Washington by the title he is still regarded as, the "Father of His Country". Though he was not significantly active in debate, and was off soldiering when the Declaration of Independence was signed, he is still considered by many to be the most important of Founding Fathers of the United States.

Washington gained fame around the world as a leading example of a benevolent national founder. Many European monarchs were astounded when Washington resigned as commander of the armies, rather than using his military victories as a stepping stone to a military dictatorship. The famous British painter Benjamin West recalled hearing King George III, the man whose armies Washington had defeated, talking about Washington. According to West, the King asked West what would Washington do if America achieved its independence. West replied that he believed that Washington would retire to a private life. George II replied that if Washington did so, "he would be the greatest man in the world." 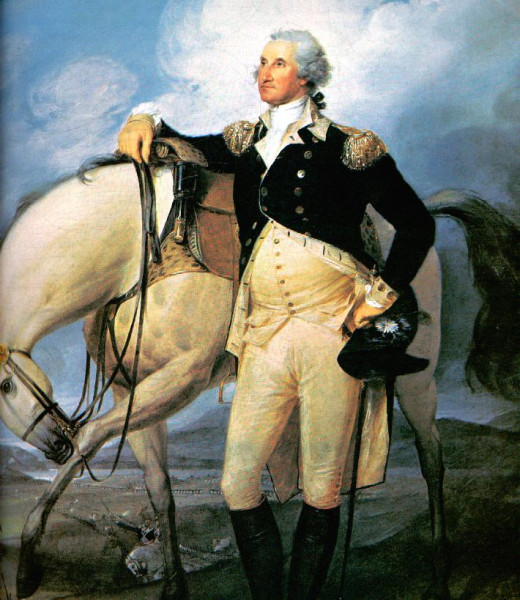 In the years after his presidency, Washington came to be remembered not only a military leader and revolutionary hero, but primarily as a man of great personal integrity. His legacy is that of a man possessed of a deeply held sense of duty, honor and patriotism. After his death, Washington was used as a shining example of these virtues in schoolbooks and school lessons. He was remembered as being someone who was courageous, farsighted and forward-thinking. He was praised for holding the Continental Army together through eight hard years of war, the deprivation that he and his armies endured, of for the harsh winter he and his army endured at Valley Forge. Washington was said to be affronted at the notion he should be King. His actions in stepping aside after two terms as President are seen as an act of humility and as a recognition that the welfare of his nation was too important to rest on the shoulders of any single person.

Washington was conscientious of avoiding political intrigue. He showed no interest in nepotism, cronyism, or using his power to better the lot of his friends and relatives. Sometimes this worked to their disadvantage. For example, he rejected the idea of granting a military promotion during the war to his cousin William Washington, even though the promotion was deserved, because he worried that this might be seen as

Washington was as not only the leading American military figure during the Revolution, but of all time. He had been the highest-ranking officer of the Revolutionary War, and in 1798 he was appointed a Lieutenant General (now three stars). Later when the rank of four and five star general was created, this meant that all of these generals were considered to outrank Washington. This issue was resolved in the bicentennial year of 1976 when an act of Congress posthumously promoted Washington to the rank of General of the Armies, making Washington permanently the senior military officer of the United States.

Washington was the first American president under the United States Constitution. He was unanimously elected by the Electoral College in 1789 and again in 1792. He remains the only president to receive the totality of electoral votes. In 1820, when it looked like James Monroe would receive all of the electoral votes, a single elector cast a vote for John Quincy Adams. Versions of why this occurred differ. Some say the elector had no love for Monroe, while others insist it was because the elector believed that the honor of unanimous election to the President belonged to Washington alone.

Even when the war was over, the survival of the United States depended in large part on the actions of George Washington. Early in his presidency, he and Alexander Hamilton saw the need for a strong central government, at a time when such a notion was resisted by those with a states' rights point of view. Washington's experiences during the war had impressed upon him the importance of national solidarity and of the strength that flowed from a central government.

During the Revolution, between 1775 and 1784, it is said that Washington's views on slavery were influenced from having witnessed those African-Americans who served in the Revolutionary Army, and how they could match the industry, dedication, and courage exhibited by white soldiers. In 1794, while President, Washington attempted to lease property at Mount Vernon to English farmers on the condition that former slaves would work as paid free laborers. His close friend, Marquis de Lafayette, was an abolitionist, and had convinced Washington to try to lease the property on those terms. The plan proved to be impractical and no buyers could be found to purchase the land on those terms. In his death in 1799, his new will directed that his slaves be emancipated and his widow Martha voluntarily freed Washington's slaves in 1800.

As the first President of the United States, George Washington developed lasting traditions that helped shape the role of the executive branch. He sought to balance an effective executive role with the importance of the sovereignty of limited government. It was highly important to Washington and the nation as a whole that the Presidency should bear no resemblance to a Monarchy. The Constitution was created for such purpose and divided the power of government into the three distinct branches. The Constitution was written with considerable ambiguity and it was up to Washington blaze the trail of how the President would carry out his constitutional powers.

George Washington blazed this trail making it clear that he would not become a king or be referred to as one. He preferred the title "Mr. President," which is how presidents are still addressed to this day. Washington also modeled the inauguration process. As Washington was sworn in during his oath of office, he placed his right hand upon the Bible. Though not required, the majority of presidents have followed this example. On January 8, 1790, Washington gave his first address to a joint session of congress. This tradition has continued, now known as the State of the Union Address. It was Washington's way of complying with article 2 section 3 of the Constitution which states the president, "shall from time to time give to the Congress Information of the State of the Union, and recommend to their Consideration such Measures as he shall judge necessary and expedient".

The president's Cabinet and the selection of cabinet members is also not explicitly stated in the Constitution. Washington established the practice of appointing secretaries of the Executive Departments. Article II Section 2 of the Constitution gives him the power, "with the advice and consent of the senate" to appoint "all other officers of the United States."

Washington strove to keep America neutral during the war between France and Great Britain, realizing that his nation was unprepared for another war so early in its life as a nation. He rejected the notion of political parties, but was unable to control their growth when Alexander Hamilton and Thomas Jefferson founded the first two parties (the Federalists and the Democratic-Republicans) based on their differing vision for the nation. Washington experienced his share of other problems as President. He approved the unpopular Jay Treaty in an attempt to normalize trade relations with Great Britain, realizing the importance of that goal. He also knew that this was the best he could expect under the circumstances. He also confronted internal revolt as he prepared to lead troops himself to quell the Whiskey Rebellion.

Washington stepped down from the presidency after serving just two terms in office, now the constitutionally mandated limit. He presided over a smooth transition between his administration and the incoming administration of John Adams. His farewell address warned of foreign entanglements and political polarization, two warnings that would largely go unheeded. He refused to run for another term and proved that the president can place trust in the democratic voting process to select the next president. 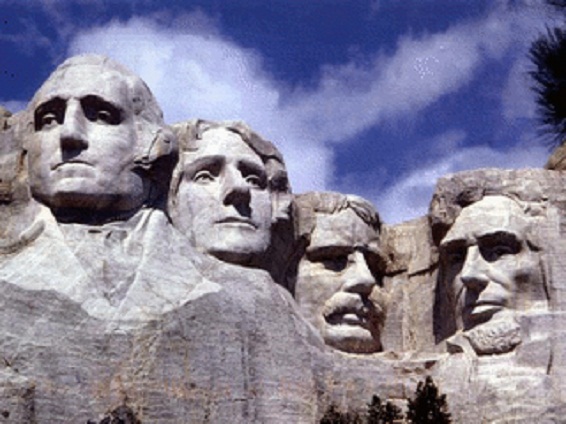 The centennial anniversary of Washington's inauguration as President fell on April 30, 1889. In observance of the occasion President Benjamin Harrison followed the itinerary of one hundred years before, from the Governor's mansion in New Jersey to the foot of Wall Street, in New York City, to old Saint Paul's Church, on Broadway, and to the site where Washington first took the oath of office.

While every President leave a legacy in one form are another, Washington leaves the longest and perhaps the greatest of any of them. How would you grade him, on a scale of 1 to 10? Please don't forget to vote in the poll!
Collapse