Woodrow Wilson was born in Staunton, Virginia on December 28, 1856, just as the nation was heading toward Civil War. His father, Rev. Joseph Wilson, owned slaves, and was a member of the clergy who defended slavery as an institution. Both of Wilson's parents identified with the Confederacy during the war and they cared for wounded soldiers at their church. Wilson's father briefly served as a chaplain to the Confederate Army. Wilson claimed that his earliest memory was of hearing that Abraham Lincoln had been elected and that a war was coming. He told the story of remembering, as a child, standing for a moment at General Robert E. Lee's side and looking up into his face. It is unclear whether the memory is an accurate one or an embellishment. 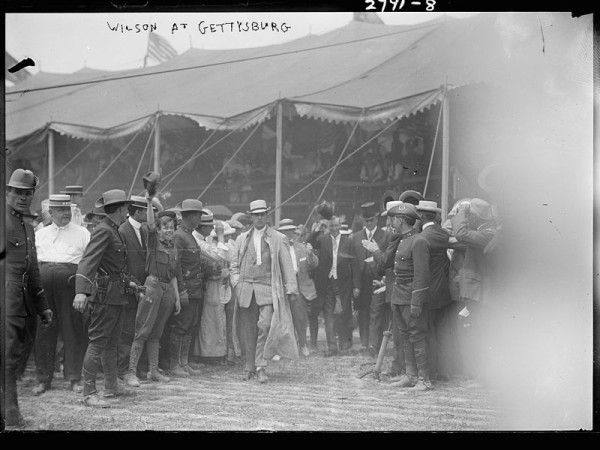 In June of 1902, Wilson became president of Princeton University. While in that role, Wilson discouraged African-Americans from applying for admission to the university. He considered them to be inferior in many ways, including intellectually. The previous year, in 1901, he had written a book entitled History of the American People, in which he wrote that the Ku Klux Klan was justified in their actions, stating that the Klan "began to attempt by intimidation what they were not allowed to attempt by the ballot or by any ordered course of public action".

Wilson stated that he believed slavery was wrong, but on economic labor grounds, rather than for moral reasons. He often described the slavery system in the South in a supportive light, viewing masters as patient paternal figures to "indolent" slaves. His view of Reconstruction was similar to that held by many white southerners, that the south was demoralized by northern carpetbaggers and that overreach on the part of the Radical Republicans justified extreme measures on the part of white southerners.

As President, Wilson set back many advancements made by African-Americans up to that point. He worked closely with Southern Democrats, who were an important part of his base. In Wilson's first month in office, Postmaster General Albert S. Burleson brought up the issue of segregating workplaces in a cabinet meeting and urged the president to establish it across the government, in restrooms, cafeterias and work spaces. Treasury Secretary William G. McAdoo, who would later become Wilson's son-in-law, permitted lower-level officials to racially segregate employees in the workplaces of those departments. By the end of 1913 many departments, including the Navy, had work spaces segregated by screens, and restrooms, cafeterias were also segregated. Wilson defended his administration's segregation policy in a July 1913 letter responding to Oswald Garrison Villard, publisher of the New York Evening Post and founding member of the NAACP. Wilson argued that segregation removed "friction" between the races.

Wilson's change in federal practices was protested in letters from members of all races. Mass meetings, newspaper campaigns and official statements by church groups expressed opposition to the policy. African-Americans who had crossed party lines to vote for Wilson, were bitterly disappointed, and protested the changes.

Archibald Grimké, head of the D.C. branch of the NAACP and a founding member of the national organization, coordinated a series of protests and mass meetings, including one October 1913 rally that attracted a crowd of nearly 10,000 to the Metropolitan African Methodist Episcopal church just a few blocks from the White House. Highlighting Wilson’s campaign slogan of “New Freedom,” Grimké called the president’s racial policies an attempt “to insult, to humiliate, to degrade, and to reduce [African-American] to a new slavery.”

Wilson defended his policy, as in a letter to the contemporary well-known African-American Minister Rev. H.A. Bridgman, editor of the Congregation and Christian World. During his election campaign, Wilson had promised African Americans that he would deal generously with racial injustices, but he did not deliver on those assurances. Segregation and government offices, and discriminatory hiring practices had been present in previous administrations, but the Wilson administration continued and escalated the practice.

When the United States entered the first world war, Wilson's War Department drafted hundreds of thousands of African-Americans into the army. Military policy established during the Civil War was continued, which meant that these soldiers were kept them in "all-black" units commanded by white officers. For the most part they were kept out of combat. When a delegation of African-American soldiers protested the discriminatory actions, Wilson replied that "segregation is not a humiliation but a benefit, and ought to be so regarded by you gentlemen."

Wilson showed the film The Birth of a Nation in the White House. The film glorified the Ku Klux Klan and portrayed African-Americans as uncivilized and primitive. The film contained a quote from Wilson: "The white men were roused my a mere instinct of self-preservation, until at last there had sprung into existence a great Ku Klux Klan, a veritable empire of the south, to protect the southern country." Thomas Dixon, Jr., author of The Birth of a Nation's source play and novel The Clansman, was a former classmate of Wilson's at Johns Hopkins University. Dixon arrange the screening at the White House for Wilson, members of his cabinet, and their families. Wilson was reported to have said about the film, "It is like writing history with lightning. And my only regret is that it is all so terribly true". This quote has been disputed however and many believe that it was falsely attributed to Wilson by Dixon. Whether or not it is an accurate quote however, it certainly accords with Wilson's past writings. 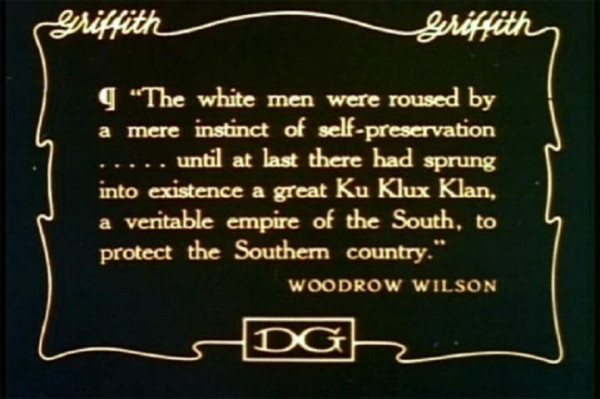 During Wilson's term, the government began requiring photographs of all applicants for federal jobs. Wilson told African-American leaders that he sincerely believed this was in their interest. Wilson signed a bill banning miscegenation in the District of Columbia and segregating DC streetcars. He appointed white southerners to his administration who introduced segregation into their previously unsegregated departments. He replaced all but two of his predecessor’s African-American appointees with white men.

The racially prejudiced changes brought about by Wilson were perhaps best summed up by Booker T. Washington, who said in August of 1913, "I have never seen the colored people so discouraged and bitter as they are at the present time."

During Wilson’s two terms in office, white administrators refused to hire or appoint qualified African-American applicants, wrote negative personnel reports on existing employees and denied promotions to longtime workers. These efforts had a crippling effect on the community, restricting their opportunity for economic advancement and job security available to educated black people.

There is a movement to remove Wilson's name from a number of locations in Washington D.C. As editorial writer Chris Myers Asch wrote in a recent editorial in the Washington Post on December 11, 2015:

"Given Wilson’s concerted attack on the District’s black community, the city should take steps to change the name of Wilson High. Doing so would not erase history; rather, it would acknowledge and respect a fuller, richer local history. Instead of honoring an aggressive white supremacist, we should embrace his nemesis, a man who articulated a sharply different vision of a democratic, egalitarian city that all of us can appreciate. Let’s call it Archibald Grimké High School."
Collapse